CHANGED OUR JEEP’S HEADLIGHT TODAY BUT I HAD AN ‘ACE IN THE HOLE’:))

I just didn’t get around to taking any photos today except of our headlight exchange & rather than digging around in my photo files for some pics I think I’ll just give our Verizon bandwidth, broadband, or whatever ya call it a break tonight:))

Probably our most exciting venture today was a drive over to Wickenburg for groceries.  I’ve written a few things in previous posts about my ventures into grocery stores & how I go about my hustling up & down each aisle hunting down my own stuff.  But here’s a little something I hadn’t mentioned before which I caught myself doing this morning.  Not the first time either but it’s just one of those odd little quirks I sometimes befall myself with.  Had my list of 10 items to find & as I picked up each one I took my pen & stroked it off my list in a little black shirt pocket book I always carry.  And yes I’ve written about that little black book before too.

Cruising smoothly down one aisle I spotted Safeway’s Yogurt section on my left & knowing I needed Yogurt slowed down, put on my turn signal & pulled over alongside the Yogurt shelf & picked me up a couple boxes of Yoggies.  Took out my little black book to stroke Yogurt off my list but noticed I had forgotten to write Yogurt down in the first place.  No problem as I took out my pen, wrote Yogurt on my list then happily stroked it off.  ‘WOW’ what a sense of accomplishment.  I bet none of you have ever done that, right.  Ya I didn’t think so:))

Really enjoying my new transition glasses & I’m finding even while driving I’m Okay with not having to wear my Cocoon sunglasses over top them so far.  How nice not to have to carry clip-on sunglasses in my shirt pocket anymore.  And what a treat seeing clearly through lenses that don’t look like they have been run over by a Yavapai road grader.

There is, has, & always will be a day come for each & everyone of us to finally hang up our RV keys for the last time for whatever reasons.  It marks the end of an era & there is always a sadness goes with it when we hear of folks we know, friends, family, or fellow RV’ers reaching that point.  And especially so with one of the most kind hearted easy going RV couples we have ever had the privilege of knowing & communicating with here on-line over the years in our tight knit sharing together RV community.  I’m speaking of course about none other than Donna & Russ Krecklow who just Wednesday gave up their keys & sold their Lazy Days RV.  I’ll let Donna’s thoughts tell you how they felt.  A Final Farewell.  And to show you how considerate & thoughtful of others these 2 people truly are, some readers may remember when back in early November of 2013 I received a surprise cardboard package in the mail.  That package came from Russ & you can read about what was in it here at, A Big Surprise In The Mail From Oregon Today.  And Russ, Hoppy still hangs proudly on our living room wall in the exact same spot I put him that day way back on November 4th 2013:))))))

While in Wickenburg this morning we stopped at O’Reilly Auto Parts & picked up another Jeep headlight.  Only $11 dollars which I didn’t think was too bad for a headlight.  Reluctantly agreed with myself to try this headlight installation myself.  From my many past experiences & a sordid track record of attempted mechanical repairs I could already sense my inner Gremlins lining up in great anticipation of once again delighting themselves by thwarting my every attempt at the task ahead.  So with that ominous thought in mind I set to work once we arrived home to swap out Jeepers burnt out headlight.  But to be fair…….I did have an ace up my sleeve:)) 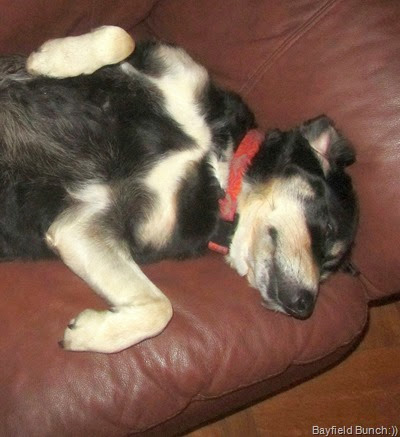 <<< HEY I MANAGED TO GRAB A QUICK PIC OF THE SNOOZING PHEEBS JUST BEFORE PUBLISHING MY POST TONIGHT:))

I knew enough to lift the engine hood but that’s where my knowing enough stopped.  Stood blankly looking in confusement wondering where do I even start to un-install Jeepers bad headlight.  Then, a light bulb moment of my own.  Into the house I went & cranked up my computer.  A minute later found me typing in these words. ‘How to change a Jeep Wrangler headlight’.  And yep there it was, a step by step video on how to do it.  Figured I’d have to sit & watch it at least 35 times so’s to remember everything but watching it closely & using all my very best memory brain cells I headed back outside with my Philips screwdriver & trusty hammer as back-up.  Of course they weren’t Philips screws at all as I heard the first Gremlin snickers.  Now what?  Aha, I remembered a gizmo gadget in the Jeep with a bunch of variously sized Allen type ends on it & sure enough one of those little end dickenses actually fit so figured I was off to the races.  ‘Not so fast Ace Ventura’ chuckled a Gremlin or two. 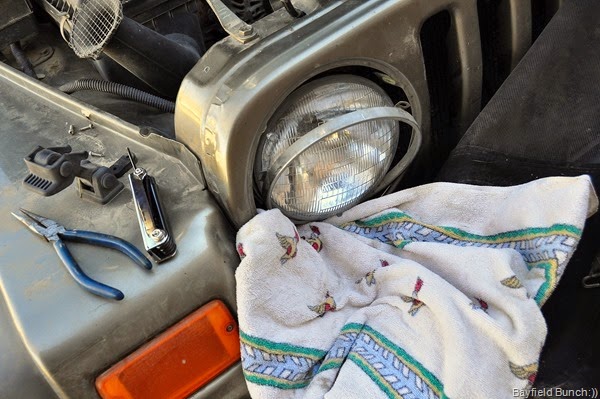 I was able to remove 3 of 3 outer chrome ring screws with no problem but inside were 4 more smaller recessed harder to see & get at screws holding another rim in place.  That rim actually held the headlight in.  Gremlins were now in high antics knowing what was coming next but by gosh this time I was determined in doing a little thwarting myself.  Slipped into our shed & retrieved an old shower curtain along with a small towel from the house.  Laid that flower patterned shower curtain on the ground underneath where I would be working & stuffed a striped towel in under the headlight itself because I knew if the towel didn’t catch the small tiny screws when I of course dropped them then at least they would not become lost forever in our stone driveway under our Jeep.  Carefully removed 3 screws using a needle nose pliers to grasp each one to prevent them from falling when backed out of their holes.  Fourth screw got away from me & landed on the towel where I was easily able to grasp it with said pliers.  Good play AL I thought as I heard some distinct growling from the Gremlin Gallery.  From here I gently removed the second rim & even remembered to unplug Jeepers headlight from behind.  No small feat in remembering that I assure you.  But taking out each of these small screws I already knew I had a big problem!! 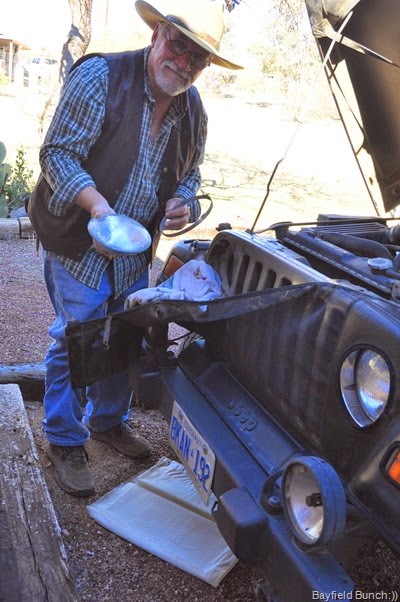 There was no way I was ever going to get those screws back in their tiny little recessed holes without a magnetic screwdriver holding tightly to each one & I already knew my fingers were too big to try & start those screws in the narrow space I had to work with.  And I hadn’t even touched on the thought of patience yet but I’m sure my Gremlin nemeses’s were already gleefully anticipating & gearing up that embarrassing little scenario for me.   Ok………….it was time to play my ‘ace in the hole’ & by golly here she comes now:))  Kelly had just walked out of the house to see how I was doing.  She knew better than to figure I was doing well.  After over 20 years she too is quite familiar with my mechanical failings & shaky left handed monkey wrench track record. 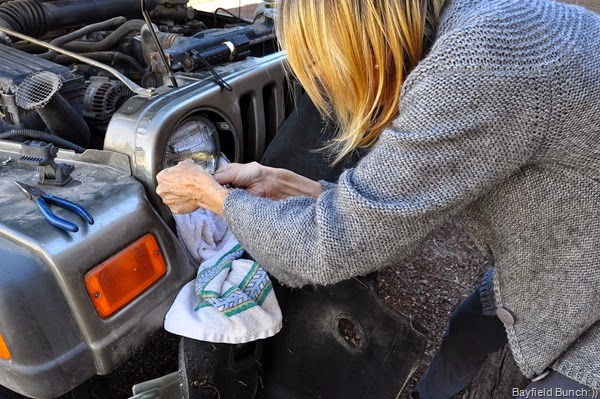 Holding Jeepers new headlight in place & aligning all 4 screw holes for the rim Kelly deftly inserted each & every screw using her slimmer fingers, supplied Jeep tool, & much larger patience reservoir.  And she did this with nary dropping a screw into towel or onto shower curtain below.  It was truly a team effort & one which I could not have completed without her…..except for maybe if I would have had a magnetic screwdriver.  Nawwww, the Gremlins would probably have had their way shutting off the magnetism at a crucial point causing me to loose 3 out of 4 screws for sure.  Yep, it was my ‘ace in the hole’ what saved the day alright.  AL 1 – Gremlins 0. Hahahahahahahahahahaha on all you smart ass Gremlins for a change & so there!!  I like when that occasionally happens:)) 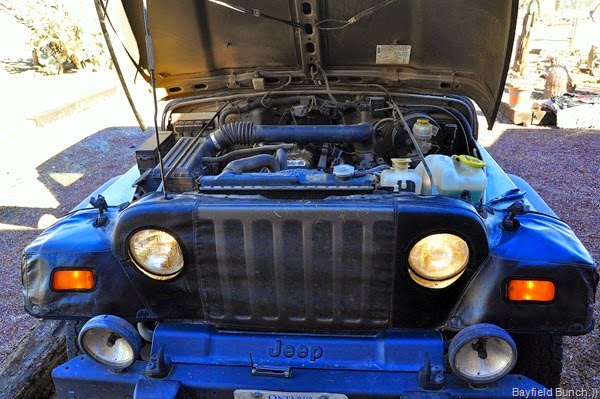 LEFT ONE IS JEEPERS NEW HEADLIGHT & UPS WILL BE DELIVERING OUR 2 NEW FOG LIGHT REPLACEMENTS FRIDAY…WILL THAT BE A JOB FOR ME TO TACKLE??  NO SIREEEEE, NOT SOMETHING I CAN DO WITH MY SCREWDRIVER & HAMMER PLUS I WANT TO SAVOR MY ONE TO NOTHING GREMLIN VICTORY JUST A LITTLE WHILE LONGER ANYWAY:))