AN UNEXPECTED QUICK HIKE THIS MORNING LEAVES MY BOWL OF CEREAL IN A MUSHY STATE….BUT I ATE IT ANYWAY:)) 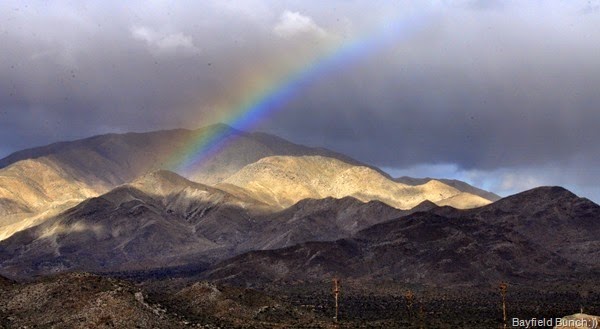 Hadn’t planned on doing any hiking today other than our morning walk.  That changed when we saw 3 wandering hikers heading in the direction of Coyote Mountain.  Kelly recognized the three as Nina & Chris & Cherie.  I figured they were off to find the great Stone Snake but after watching their direction for a few minutes & seeing them stop as if they were trying to figure out their way I left my half bowl of cereal on the table, grabbed my hat & cameras & out the door Pheebs & I went trying to catch up but they had too much of a lead on me.

KELLY SPOTTED THESE HIKERS GOING BY WHICH TURNED OUT TO BE POLLY, NINA, CHRIS, & CHERIE

They had entered a steep upward ravine & by the time I saw them they were nearly at the top of a ridge.  I knew the Stone Snake was just the other side from having climbed this rugged rocky ravine ourselves the first time.  I hollered up for them to keep going thinking they might turn back. 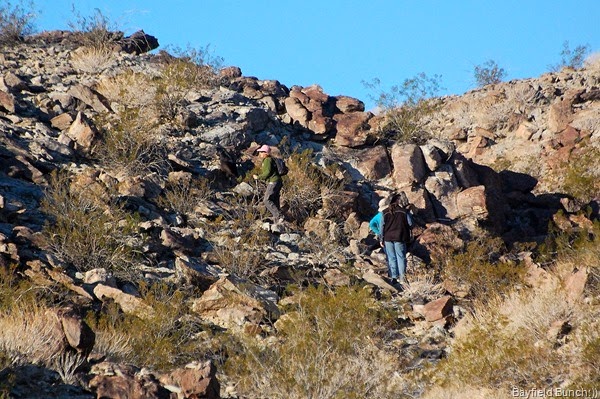 THE GREAT STONE SNAKE IS JUST OVER THAT ROCKY RIDGE

What I didn’t know was that Nina had already been up this route so in fact they did know where they were going. I decided to skirt around the other side of the hill & take a much easier path up to the snake.  Figured I’d better tell them about the better trail to come back on.  I did finally meet up with these folks in the wee valley of the snake.  That’s when I found out Nina had been here before & knew the trails. 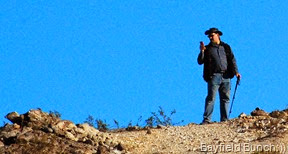 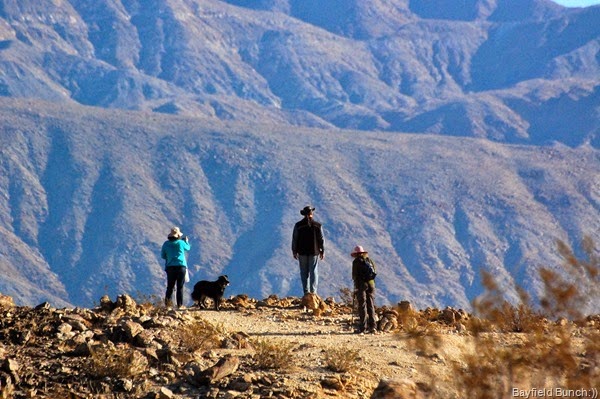 Pheebs & Nina’s dog Polly were able to get re-acquainted & Pheebs was doubly happy because Nina had treats.  I didn’t want to interrupt their hike so without further ado I excused myself & headed back down Coyote mountain.  Besides I still had a half bowl of mushy Shreddies waiting for me, my legs were falling off, & I had forgot I was still wearing 3 shirts from our earlier morning much colder walk. I had turned into a total sweat ball in the rapidly warming sun. 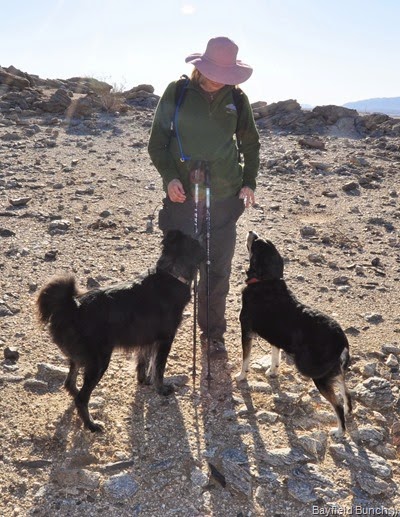 Other than zipping up & down Coyote Mountain this morning our afternoon remained rather physically inactive.  Just a lot of lounging around.  We definitely have to swap out our Flexsteel tub chair for a nice comfy wall hugging RV friendly recliner for sure though.  Recliners are my all time favorite pieces of furniture.  And next year I’ll leave this harder bum numbing dining room chair in Bayfield & replace it with our buns friendly computer chair from the sunroom. 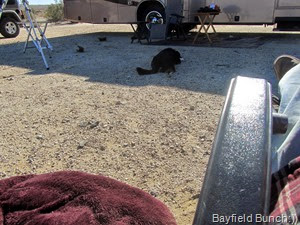 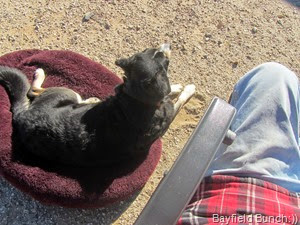 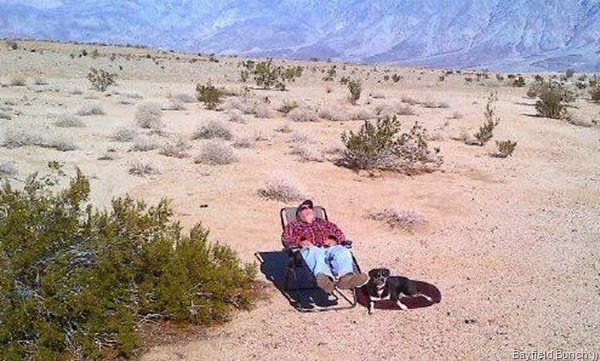 KELLY ‘FACE BOOKED’ THIS PHOTO WITH THE CAPTION, ‘A MAN & HIS DOG ENJOYING THE DESERT’

Haven’t carried our mobile satellite TV dish with us while traveling since the winter of 011-012.  You can tell we’re not real serious TV people but we do still do enjoy our favorite few programs.  Knowing we were going to be away from home longer on this trip than our previous trips we decided to bring our satellite dish with us this time.  It’s the same dish we use for Canadian television while we’re in Congress.  We’ve been here in Borrego Springs for nearly 4 days now.  I have the dish physically set up but we just haven’t bothered to hook up the cables & program it yet.  Like I said…..we’re not really serious TV people.  Update:: We did finally gather up enough interest & energy about mid afternoon to give the satellite TV set-up a go.  Took Kelly about half an hour figuring out the remotes, receivers, gizmos & gadgets etc. etc. etc. & we were up & running.  Sound comes through our stereo so no tin can TV sound.  Bonus:)) 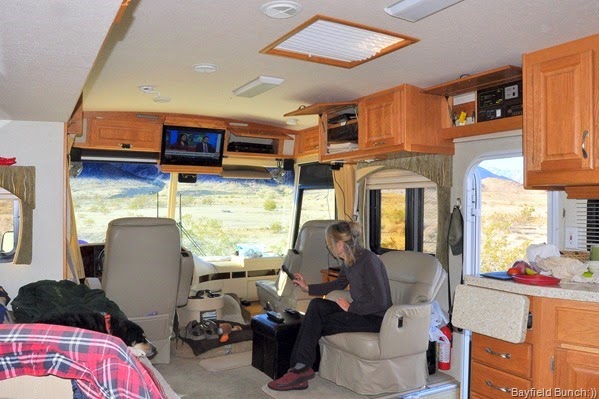 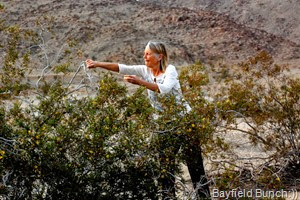 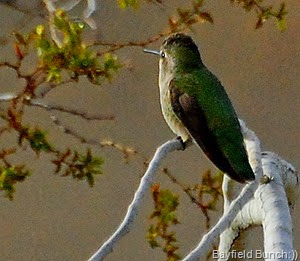 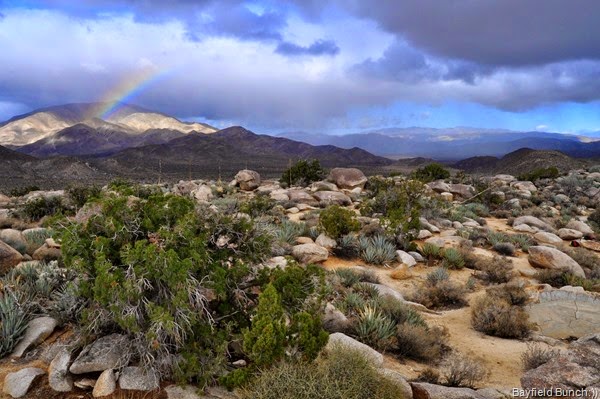 I’m not a big guy on museum type places but I would like to see where Joe & Nancy from the RVING BEACH BUMS just toured.   It’s in Cleveland Ohio of course & it is the ROCK & ROLL HALL OF FAME.  Maybe one of these days we’ll just scoot on down there from Bayfield. 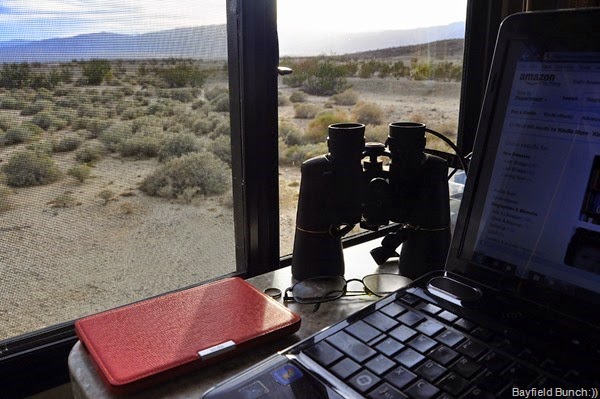 In Wednesday’s post I mentioned not having a burg & fries for about 4 months.  May I add to that I haven’t eaten a muffin or a donut or a piece of pie or any pastries for just about that same length of time as well.  And there is a reason for that.  Back in September one day I stepped on my weigh scale & was alarmed to see the numbers 218 come up.  Figured right then & there I had better do something about my weight.  And I did.  Three days ago I again stepped on the scale & was happy to see the numbers 198 come up.  A loss of 20 pounds.  Figure if I can dump another 15 to 20 pounds I will be where I really need to be.  I hadn’t mentioned this voluntary weight loss before in fear of jinxing myself like a few other times over the years I’ve posted about me losing some weight.  Biggest difference this time is that I never gave up my peanut butter & honey like I did the other times.  Now if I have a ‘sweet’ craving I just have myself a couple peanut butter & honey scoops & I’m good to go.  So far so good:)) 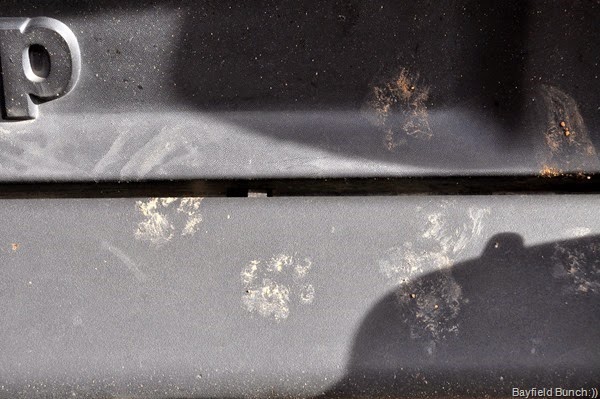 Ever been woke up at 1:30 a.m. in the morning with burning embers in the air & a fireman at your RV door telling you to evacuate the area immediately.  Just happened to Doug over at MISS ADVENTURE TRAVELS & he’s got some scary fire photos to prove it. 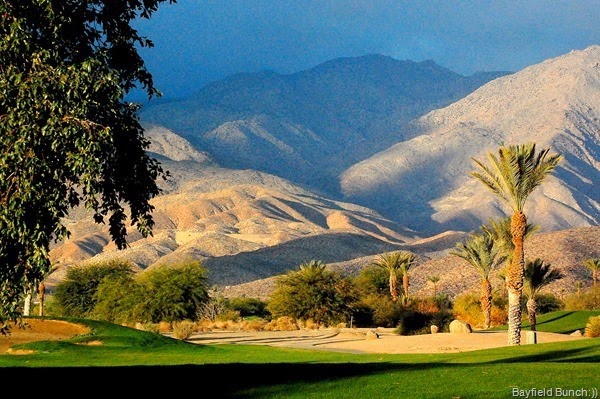 Sure nice to have our inverter working properly again.  Combined with our solar panels & batteries we always have adequate power going on to camp out wherever we want.  Best RV decision we ever made was going with solar as far back as December of 2008. 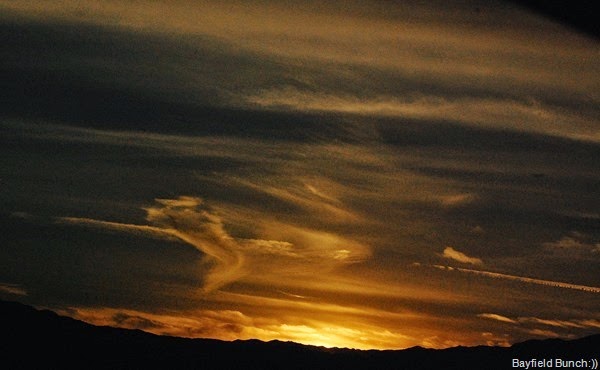 GROANER’S CORNER:(( A fellow was sitting in the doctor's waiting room, and said to himself every so often, "Boy, I hope I'm sick!"  After about the fifth or sixth time, the receptionist couldn't stand it any longer, and asked, "Why in the world would you want to be sick, Mr. Adams?"  The man replied, "I'd hate to be well and feel this bad."

If you can start the day without caffeine or pep pills,

If you can be cheerful, ignoring aches and pains,

If you can resist complaining and boring people with your troubles,

If you can eat the same food everyday and be grateful for it,

If you can understand when loved ones are too busy to give you time,

If you can overlook when people take things out on you, when through no fault of yours, something goes wrong,

If you can take criticism and blame without resentment,

If you can face the world without lies and deceit,

If you can conquer tension without medical help,

If you can relax without liquor, If you can sleep without the aid of drugs,

Then, you are almost as good as your dog or your cat.