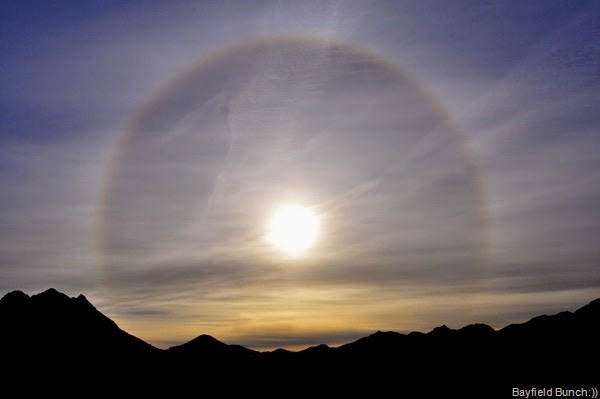 Our day dawned with a high cloud cover rolling in over the area.  Checking weather for the next few days we saw rain forecast for both Quartzsite & Congress Wednesday if not sooner.  Didn’t want to be packing up in Quartzsite or unpacking back in Congress in the rain.  Here in the desert rain = mud!!  Forecast also called for cloudy skies today & Tuesday.  No sun means colder temperatures this time of year in these parts.  The combination of cooler temps & no sun pretty much take out the mystic & mystery of the surrounding mountains for me.  Without old Sol’s rays digging deep into the shadowed canyons & dancing out Mother Natures colors & sparkles it’s just not the same magic Kingdom we always so much enjoy exploring.  By the way for anyone interested here are the exact Google Earth co-ordinates for where we were boondocking.  33*15’15.32”N by 114*13’24.12”W  The Google Earth photo of this spot was taken March 3rd of 2013 & it shows what appears to maybe be a truck & 5th wheel parked in the same spot we were.  ‘Checkers Hill’ is just across the wash. 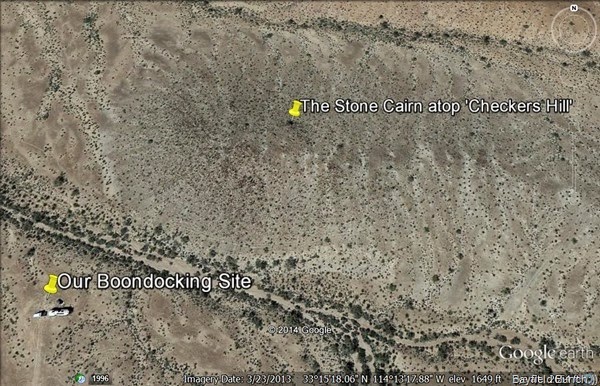 Sitting around this morning we weighed our options.  We had originally hoped to slip on down to the Imperial Dam area & look up JUDY & EMMA but after reading Judy’s post this morning I saw she was working at the Visitor’s Center today & Tuesday.  Dropping in to see someone at work is not my idea of a nice relaxing visit.  We hope to be back in the area during February or March so we’ll try & catch Judy & Emma at that time.  Another option we had was to just have us an inside day today but that did not appeal to either one of us.  About 10:15 we made the decision to make the short hour & a half drive back to Congress.  If we’re just going to sit around anyway we might as well just sit around at home.  Twenty minutes later we had the big wheels rolling & within the hour we were hatching new travel plans:)) 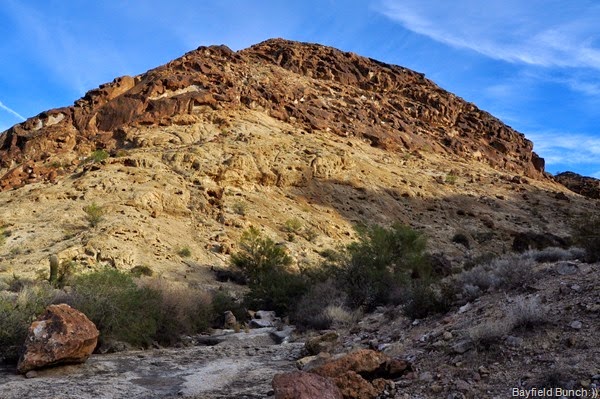 FROM SUNDAY’S HIKE WITH IVAN 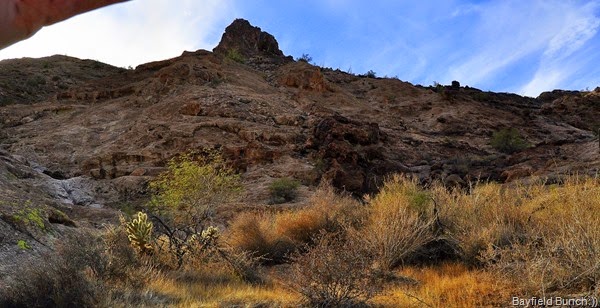 Of course we made our customary stop at McDonald’s in Quartzsite for coffee & wraps.  I have really taken a liking to the crispy chicken wraps with lettuce, tomatoes, & cucumbers I think.  Plus a good sauce.

APPROACHING QUARTZSITE’S MAIN INTERSECTION FROM THE SOUTH THIS MORNING

It was east of Quartzsite after turning off I-10 that I ventured a suggestion which met with a response I hadn’t expected.  Just off the cuff I said to Kelly, ‘wouldn’t it be nice to be on the road again in a couple weeks heading off for someplace new’.  And here’s where Kelly made my day when she said ‘yes, let’s go.’  I knew right then & there Kelly was feeling much, much, better:))  I suggested a place Sue from THE MOHO & OTHER TRAVELING TALES had emailed us about late last March.  Kelly agreed & also suggested a 2nd trip as well back to one of our favorite Arizona areas of all time.  No not Borrego Springs, Sedona, or the Kofas. 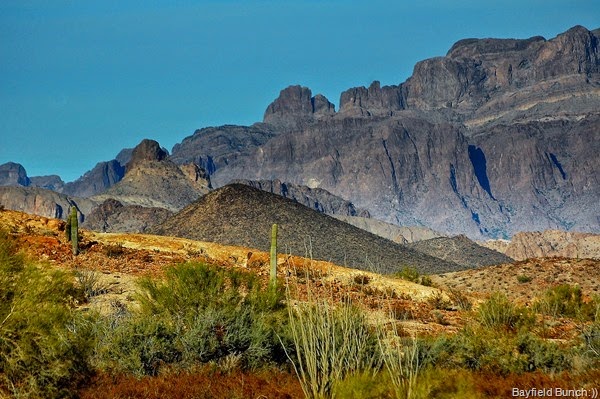 Within minutes of discussing our travel plans Kelly had her laptop open checking weather for the Mojave National Preserve in California just over the western edge of the Arizona border.  This is the place Sue had suggested. If the temperatures are acceptable for late December & early January we plan to head on up there in a couple weeks & see what we can see. 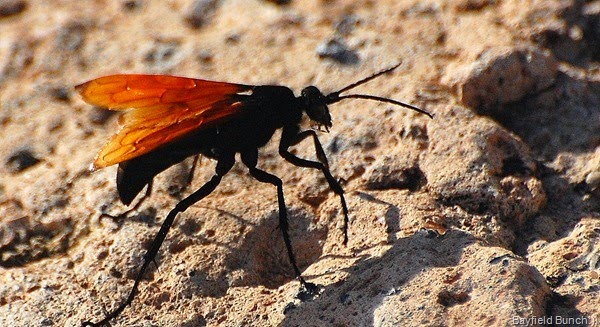 Our 2nd set of possible travel plans for this winter would take us on a 2 or 3 week journey through past Arizona memories.  Memories we so enjoyed between the years 2006 & 2012.  Of course I’m talking Ajo, Why, Sierra Vista, Bisbee, Tombstone, McNeal, Elfrida, & up & over the Chiricahua Mountains through Rucker Canyon to Portal near New Mexico’s State line.  What a wonderful trip down memory lane this southeastern Arizona trip would be for us.  I’m already excited just thinking about getting the big wheels rolling for this one:))

And some more feedback from readers on our possible UFO sighting.   Be sure to read P Dugway’s 3 comments on my Sunday post about our possible UFO/UAO sighting this past Friday night over the Salton Sea in California.  Maybe it was a genuine sighting we had after all.  P Dugway makes some very interesting & also logical points as to what we did or did not see.  Interesting thoughts indeed.  And Daniel sent us an email with some photos wondering if any of the photos reminded us of what we saw.  I picked the one below. 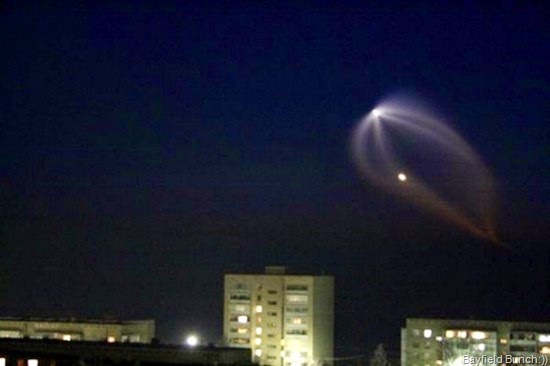 Ivan sent us a 10 second GoPro cam video he took Sunday afternoon of he & I flying along in the Jeep but I’m not able to include it in my post.  Maybe in his next blog he will include it in his.  It’s kinda cool & what a clever idea he had attaching his new GoPro cam to the end of a broom pole.  The video was taken from outside the Jeep while we were moving.  I want a GoPro cam!!!! 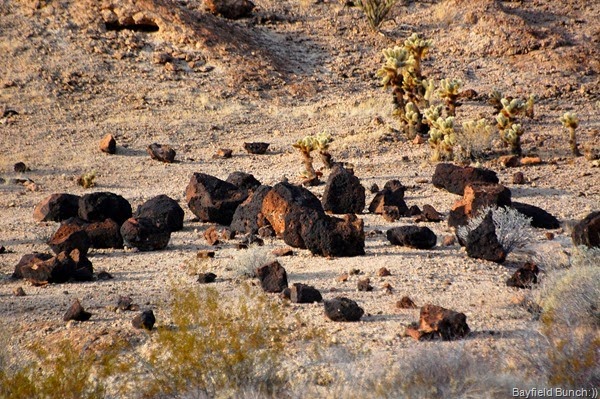 JUST A BUNCH OF TUMBLE DOWN ROCKS

We still receive Real Estate ads from a Florida Realtor.  Few years back when I had the kidney stone problem in Tucson we began re-assessing our future RV travels & for a brief time turned our attention turned to northern Florida around the area of Old Town.  A much shorter travel distance for us from Ontario was number 1 on the pro side of things.  We also couldn’t believe how cheap Real Estate was in that area.  Another listing arrived this morning with a nice one story house on an acre of land for only $32,000.  Sure gets the wheels a turnin in one’s head alright. 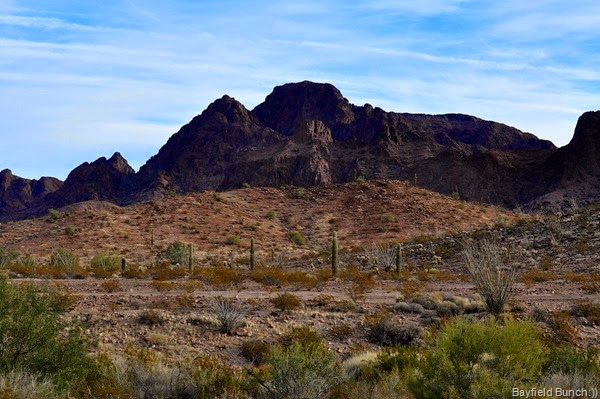 Yousers has it turned colder or what.  Kelly’s in the living room watching TV in front of a big heater.  Thermometer says it’s 60F in the house but if feels more like 40.  I’m in my bedroom with a heater blasting away right under my Ikea chair & it’s about 110 in my shorts:)) 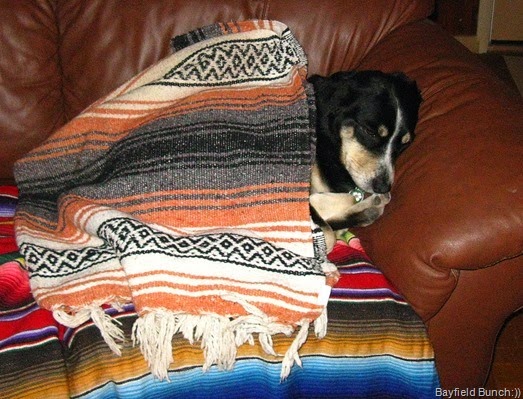 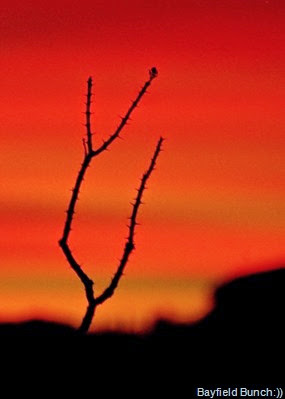 <<< SUNRISE OUTSIDE OUR WINDOW THIS MORNING

GROANER’S CORNER:(( A distraught patient phoned her doctor's office. Was it true, the woman wanted to know, that the medication the doctor had prescribed was for the rest of her life? She was told that it was.  There was a moment of silence before the woman continued, "I'm wondering, then, just how serious my condition is. This prescription is marked "NO REFILLS."