SO WHAT DID AN OMNI ANTENNA, A VERIZON JET PACK & A WILSON SLEEK AMPLIFIER HAVE TO DO WITH MY DAY… 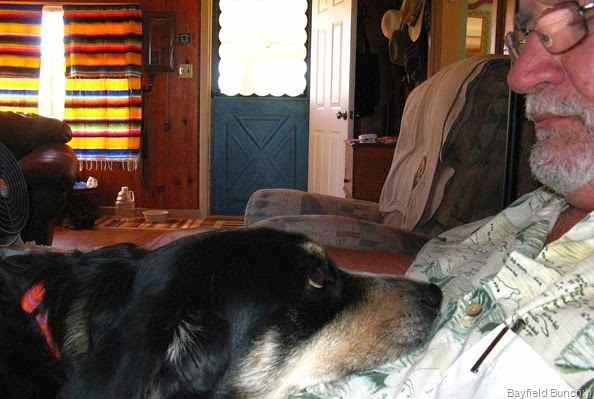 US GUYS ARE THE BESTEST PALS:))

We decided a month or so ago we didn’t really need to check out any more garage sales.  We have everything we need for the house & we just didn’t want to get in the habit of dragging home more ‘stuff.’  Well old habits can be hard to break.  For the past 2 years we have attended the annual second November Saturday garage sale at North Ranch here in Congress.  The pull was too strong this morning for Kelly & off she went.  I stuck to my guns & stayed home.  Besides, I had a little project on the go. 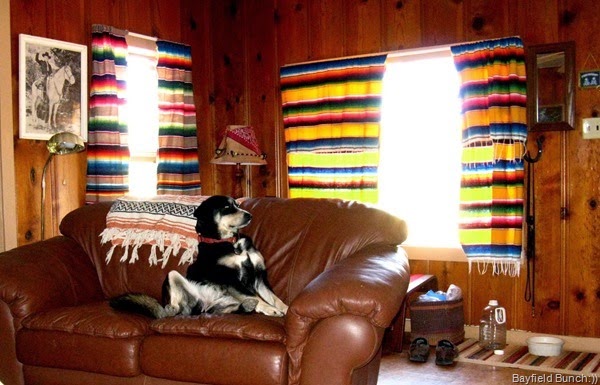 YEP SHE’S THE QUEEN OF THE HOUSE ALRIGHT

Our Omni internet antenna from the 3G store arrived late Friday afternoon & I was anxious to get it up before it got too hot out today.  Figured we’d put it at the second highest peak on our house which is at the south end.  I later changed that thought but in the meantime I determined I would have to put the antennae on another piece of wood before affixing that piece of wood to the roof peak.  And I would have to do everything with a screwdriver because I have not been able to find my Black & Decker battery powered drill since we arrived.  Only conclusion is that I left it in Bayfield.  Also needed to saw up a piece of wood.  Luckily I had brought an older Skil saw along with us last year & just left it here.  But there was a problem.  When I retrieved the saw from the shed it was immediately apparent it was not going to work.  A Pack Rat had chewed the electrical cord off right at the plug.  I’m usually in the habit of cutting electrical cords off things before I throw them in the garbage & fortunately I had a couple cords hanging around.  Spliced the connection, wrapped things up with electrical tape & I was back in business. 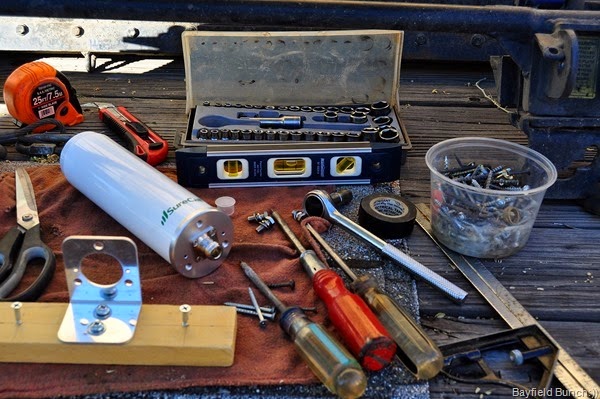 A BUSY WORKBENCH THIS MORNING

Managed to screw the antennae mount to the small block of wood & to make a long story short I abandoned the idea of putting the antenna on the secondary peak & decided to just go ahead & put it on the highest peak which as it turned out was an easier install anyway than the secondary peak.  Of course that meant another climb up on the roof but I’ve got that down pat now so no problem.  Half an hour later I had everything in place & we hooked up the coaxial cable & ran it down the roof over the edge & into Kelly’s bedroom window.  So, did we immediately get on-line with lightning speed coverage??  No we did not!! 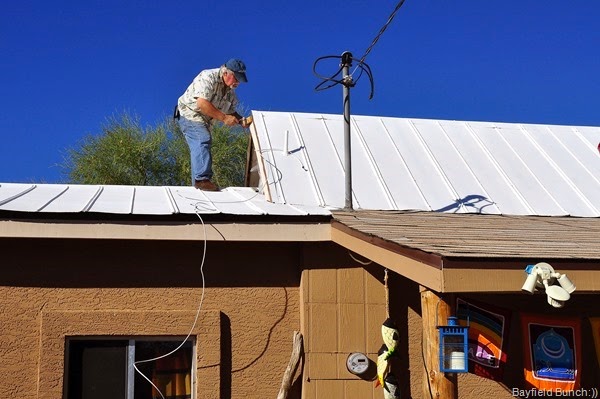 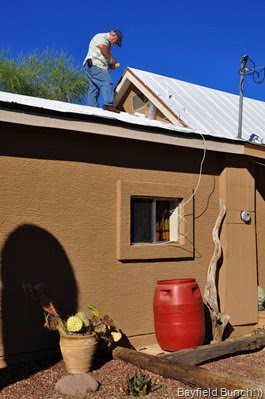 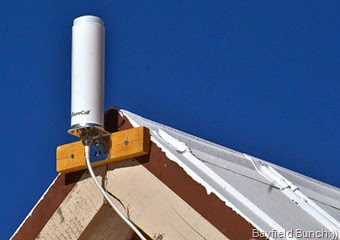 YES I KNOW THE INSTALLATION ISN’T PRETTY BUT IT WORKS

I have been around too long & know better than to allow myself any of those silly optimistic thoughts when it comes to technical things like this working & my knowing better stood me in good steed this morning.  I always figure it’s better to aim low & if you hit high it’s always a double good feeling rather than aim high only to hit low & suffer a double disappointment.  Yes I was really hoping this antenna was going to solve our problems but in reality I of course had my doubts.  We quickly fired up our computers only to be greeted with white screens saying something to the effect, ‘This page cannot be displayed’.  Now what!!!!  Ok, one thing at a time.  Our Verizon Jet Pack showed the antenna sending a good signal to it but that signal was not reaching our computers.  Next we plugged in our Wilson Sleek & the signal improved even more but our internet still had a sporadic signal.  Pages were definitely opening faster when we were connected but we still have a connection problem of some kind.  So when it works it works great & when it doesn’t work it doesn’t work worth a darn.  Wrote this at 11:30 a.m. Saturday morning. 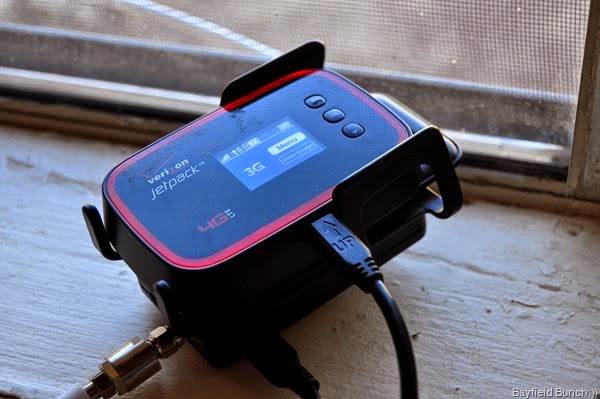 Just noticed our Friend Connect box on the sidebar shows we have a new Blog Follower.  Welcome aboard to Jerry Criswell.  Clicked on your name Jerry but Google came back with a 404 error saying your URL couldn’t be found.  Thanks for dropping in…………… 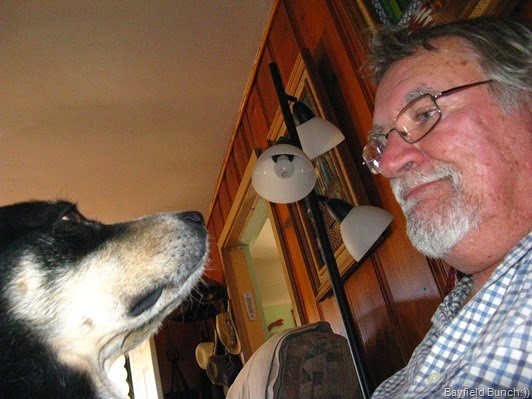 6 p.m. Saturday night…….Whatever little bugs & gremlins were in the Omni/Jet Pack/Wilson Sleek system this morning seem to have resolved their differences & our internet worked great for the rest of the day.  What I first thought was a big bust has turned out be be a big success as I write this tonight:)) 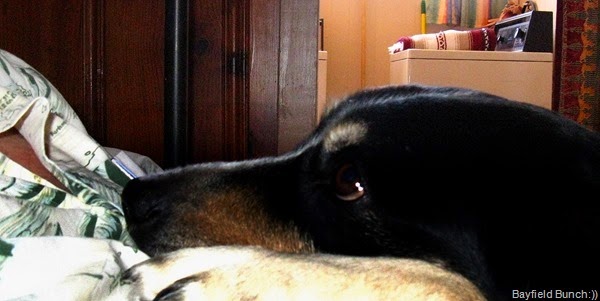 SHE THINKS SHE IS A LAP DOG & I AM HAPPY SHE THINKS LIKE THAT:))

GROANER’S CORNER:((     Three boys were heading home from school one day when one started the time-honored game of paternal one-upmanship. He said, "My dad's way faster than any of yours, he can throw a 90-mph fastball from the pitcher's mound and run and catch it just after it crosses the plate!" One of the other boys said, "Oh yeah? Well my dad can shoot an arrow from his bow and run to the target and hold it up to make sure the arrow hits the bullseye!" The last boy said, "Your dads don't even come close to being faster than mine. My dad works for the government, and even though he works every day until 4:00 he gets home at 3:30!"