CONGRESS, VULTURE PEAK, I-10’S TONOPAH, & AN RV BLOG READER DROPS BY ON HIS WAY TO YUMA:)) 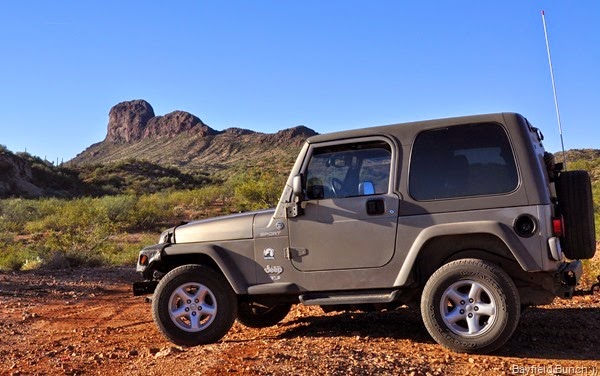 OUR FIRST DESTINATION THIS MORNING WAS THE VULTURE PEAK AREA

Had the Jeep’s wheels rolling before 8 a.m. this morning heading for Vulture Peak via Vulture Mine Road running west out of Wickenburg’s north end.  Another fine bright sunny Arizona start to the day.

Turned left onto a dirt road called Vulture Peak Road & rolled past the campsite where we first met Peter from AMERICAN TRAVELER back in March of 2012.  We were having breakfast with Peter one March morning when we got a cell phone call from our Realtor in Prescott informing us our Congress house deal had gone through.

WE SAT HERE NEAR THE FIRE PIT WITH PETER FOR BREAKFAST

We don’t seem to do the long walks & hikes we once did in the first number of years RVing but we did get out for a bit of a walk northeast of Vulture Peak on a Jeep road for awhile this morning.  It is always such a treat to experience the silence of a surrounding landscape.  In this case it was desert & mountains.  No human sounds anywhere.  Oh how we would love to have a house in that kind of environment.  To step outside in the morning air with no barking dogs or cars going by.   And no neighbor sounds of any kind.  Ahhhh tis what dreams are made of in our kind of world:)) 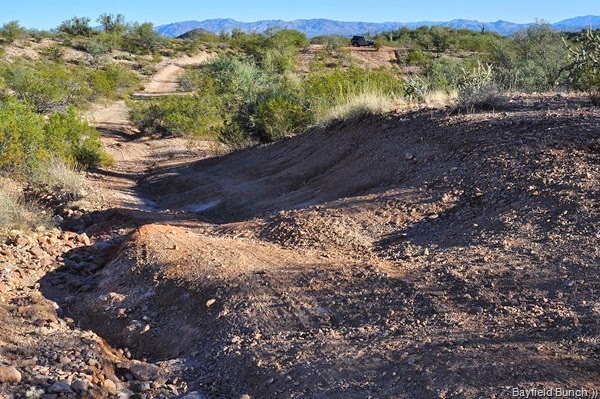 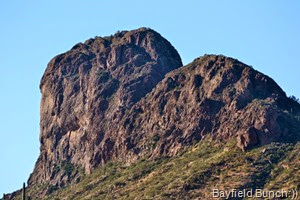 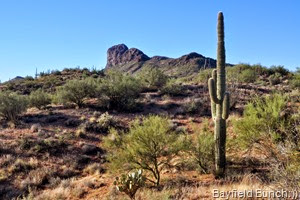 A CLOSE UP 300mm VIEW OF VULTURE PEAK

Main purpose for venturing out Vulture Peak way was to see where the highway went heading south from there.  Looking on a map the past few years I could see it led down towards Tonopah & Buckeye on I-10 but seemed to have some twists & turns at that end.  And I wasn’t sure if it was paved all the way.  The ‘paved all the way’ was important to know because this is the route we would chose to go if at any time we decided to head down into south central or southeast Arizona.  There is no way we would even remotely think of heading down that way if we had to go through Phoenix & Tucson so we set off south on Vulture Mine Road to see if we could reach 1-10 via this route.  Nice easy scenic drive & with one left turn, another left turn & one right turn we reached an I-10 interchange at Tonopah.  Yes it was paved all the way from Wickenburg & I was happy to know that because now we had an alternate passage to southern Arizona.  At I-10 we were in familiar territory & I knew it was an easy drive from this interchange east to Buckeye then south down highway 85 through Gila Bend to a few of our old favorite haunts.  Ajo, Darby Well Road & Hickiwan Trails RV Park in Why Az.  And from there another familiar & favorite drive on highway 86 from Why to the south end of Tucson would land us back on I-10 for a drive eastward for even more memorable territory.  Gets my adrenalin going when I think of Benson, Sierra Vista, Tombstone & Bisbee.  And beyond that lies Cochise County & all the wonderful memories of our ranch sitting days near McNeal.  Long time readers will remember all our good times & adventures in that whole area just a few short years ago……….Well I’ve driven my memories a little too far here so I had better slow down, get myself turned around & backtrack to Tonopah on I-10. 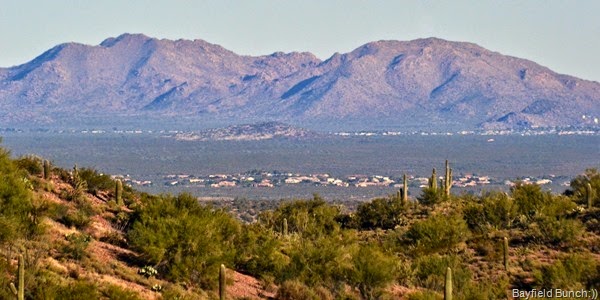 After crossing over the Interstate we noticed a Shell gas station service center complex with a Taco Bell, Subway, Pizza Hut & a fairly large restaurant.  Lots of trucks here & the place looked busy.  Decided to pull in for a sub before heading back the way we had come.  I don’t know how this always happens but it does.  Whenever Kelly goes in to get some kind of a food item anywhere she always comes back with better tasting food than I do if I had gone in.  The sub she came back with today was way better than the sub I would have come back with.  Same thing at home.  I can make a sandwich but if Kelly makes the same sandwich it always tastes better.  Why the heck is that anyway.  Pulled the Jeep up close to the north side of the sub shop out of the sun & we chowed down on our big yummy sub.  Pheebs too. 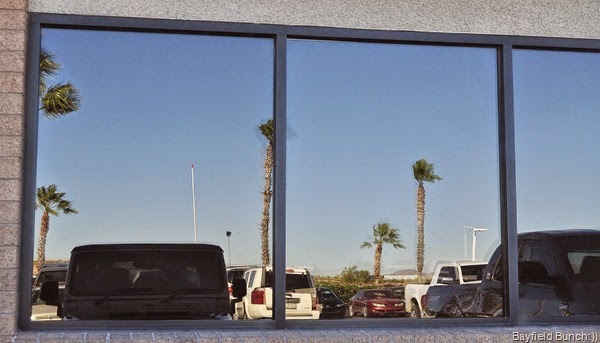 OUR REFLECTION IN THE COOL SHADE OF THE SUBWAY SHOP

An hour later we were back in Wickenburg.  Quick stop at Safeway for a couple things & 20 minutes later we were in Congress heading up Ghost Town Road.  As we came closer to our house we saw what appeared to be a Class C Motorhome parked at the side of the road in front of our house.  We swung in & came through our south gate.  A stranger approached saying “Hi my name’s Hank”.  Well he was a stranger no more as I right away recognized that name as one of our blog readers these past 4 years or so.  Hank was on his annual southbound Snow Bird trek from Abbottsford British Columbia to his winter destination in Yuma Arizona.  He had left the Las Vegas area early this morning & came this route because he had an RV to look at in Prescott.  Knew he would be coming down through Yarnell & Congress to catch highway 71 for Quartzsite so dropped in to say Hello.  It was a chance meeting & had we been 5 minutes later we would have missed him. 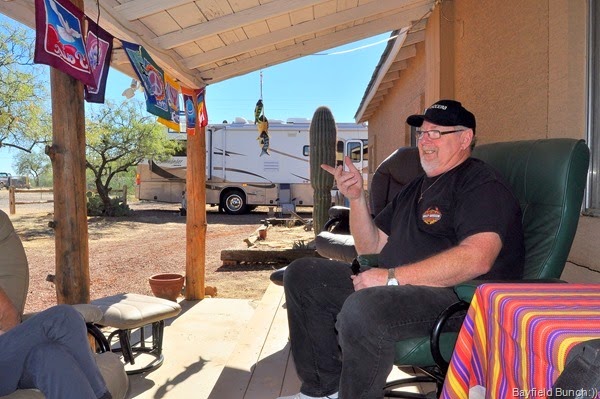 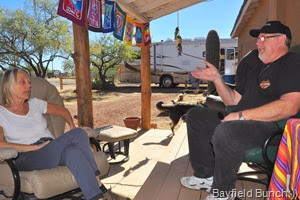 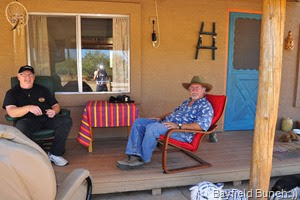 We hauled a few chairs together on our front porch & had ourselves a good old RV chin wag.  Hank had full timed years ago in a Class A diesel pusher & had also owned a 45’ Dutch Star.  Due to some heart problems his Doctor advised him to slow down a bit so Hank downsized everything selling his Class A coach, Harley-Davidson motorcycle & his Corvette car amongst other things.  Bought himself a Class C type Chinook but like us with our 2 previous Class C’s he is finding it too small & that’s why he had stopped in Prescott to look at another Class A Motorhome.  Hank’s destination today was Yuma so he was soon on his way again.  He asked me how long I thought it would take to get to Quartzite which is on the way.  I said 3 hours but shortly after Hank left I remembered it’s only about an hour to the Q from here.  Oh well I thought, he’ll be a happy guy to get there in 1 hour instead of 3.  Thanks for dropping by today Hank:))

HANK HEADS FOR YUMA IN HIS 21’ FORD CHINOOK 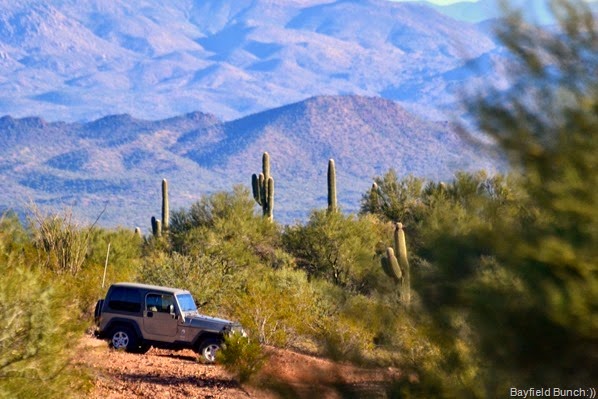 GROANER’S CORNER:(( Sally phoned her husband, Bill, at work for a chat.  "I'm sorry dear," said Bill, "but I'm up to my neck in work today. I don't have time to chat."
Sally replied, "But I've got some good news and some bad news for you, dear."  "OK darling," said Bill, "but as I've got no time right now, just give me the good news."
"Okay," agreed Sally. "Well, the air bag in the car works!"

A pastor got up one Sunday to preach and announced to his congregation: "I have good news and bad news. The good news is, we have enough money to pay for our new building program. The bad news is, it's still out there in your pockets."