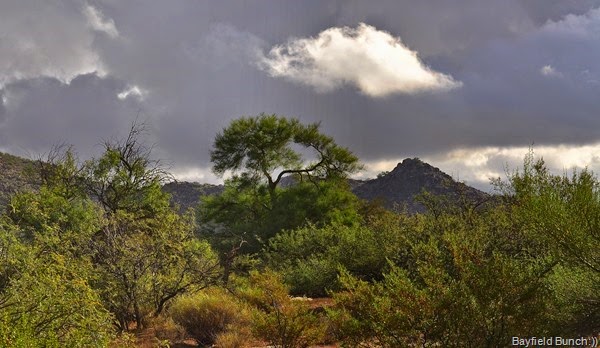 Soon as Pheebs & I stepped out the door this morning I knew it had rained somewhere nearby.  Being familiar with humidity I could immediately feel it in the air & a second later I could smell it.  The desert takes on a sweet pungent odor from it’s many Creosote bushes when it rains & the scent is always instantly recognizable.  Not a repulsive odor but definitely recognizable.  And I liked that touch of moisture in the air.

WE JEEP OURSELVES OUT INTO THE DESERT 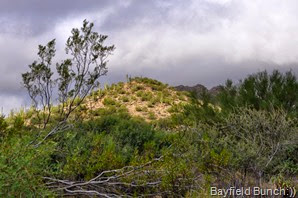 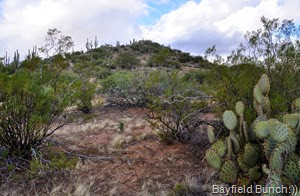 OUR GOAL THIS MORNING WAS THE TOP OF THAT HILL 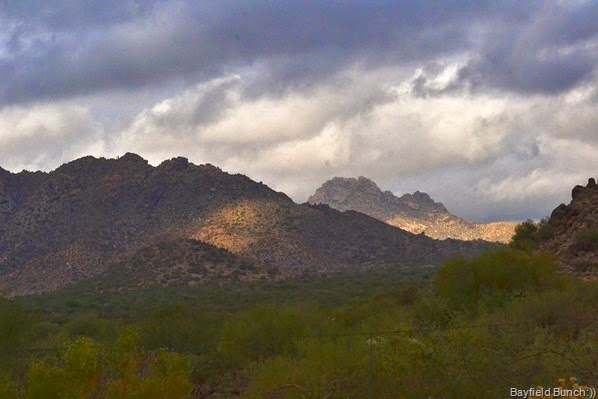 We don’t walk our usual route from the house round the block into the desert anymore.  I do not like having to start my days off with loud barking dogs.  Instead we drive about a quarter mile to a different gate & head out into the desert that way.  No traffic, no people & no barking dogs.  This morning we drove a little farther out into the desert to a hill we have often driven by the past couple years.  Always thought we should just stop & climb up that hill sometime.  This morning was that time.  We were at a nice 63 degrees with not only a scenic patchy cloud cover but a thick enough cover to block the sun’s uncomfortable heat rays.  Uncomfortable for us that is. 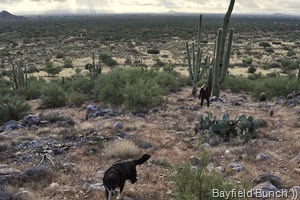 WE START OUR CLIMB

It was the first time since we arrived here over a month ago that we both felt in more than just a walking mood.  How nice to feel that bit of strain in the legs again as we set about clambering ourselves up a moderately rock strewn but easily hikeable ascending terrain.  Not a place to come in the heat of day due to probable rattlesnakes in the rocks but it was cool enough & the rocks cold enough not to worry about snakes being out. 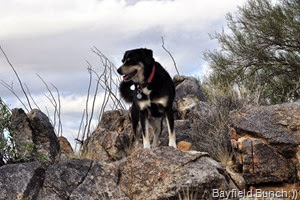 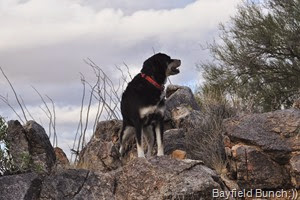 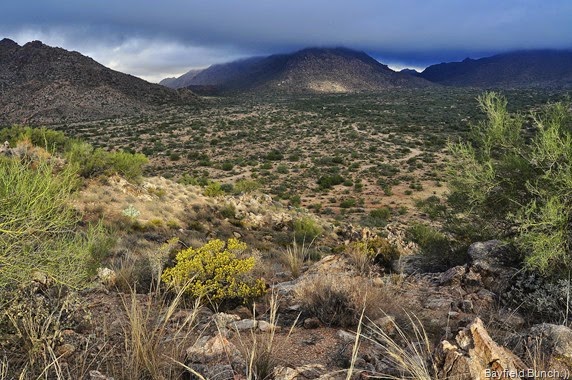 Kelly made it up about two thirds of the way & decided not to push herself to the top.  She likes to set off & do a little exploring on her own anyway so Pheebs & I headed on up the last third to the summit.  In the grand scheme of hikes & rock scrambling this hill was a pretty easy climb but oh how great it felt to be once again hiking on new ground seeing seeing new things & feeling a new sense of well being.  In our early years of RVing & boondocking we used to hike a lot more than we do now & I thought about that this morning as we made our way around Saguaro Cacti, Prickly Pear Cactus, Creosote shrubs, Palo Verde Trees, Barrel & Hedgehog cactus.  What a great feeling it was as I stood atop the hill gazing all about at the vastness of the open desert stretching out below in all directions reaching for distant mountains on all horizons.  This was the feeling of old, this was a feeling we have been missing for a long time, this was a great feeling of being back in touch with the great southwestern landscape. 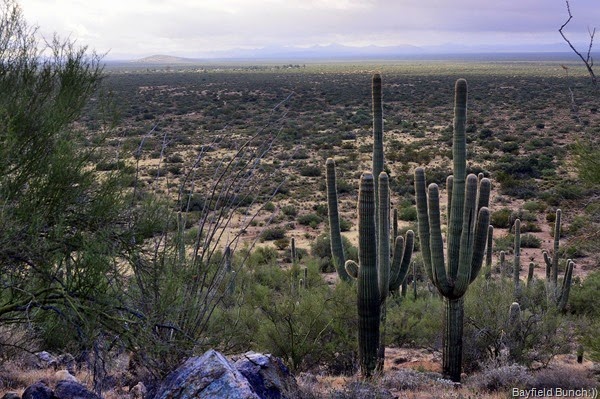 Staring out over the desert floor watching sunshadows play across the dappled green land I looked off in the direction of Quartzsite, the Kofa Mountains, Bouse, Yuma, Slab City, the Salton Sea & Borrego Springs letting our years of enjoyable past memories flood over me.  Ghost Mountain was out there in the Blair Valley & I felt a ripple of excitement course through me thinking soon we will once again be traveling old familiar roads, haunts & trails.  And looking forward to traveling on to new places where we have never been. 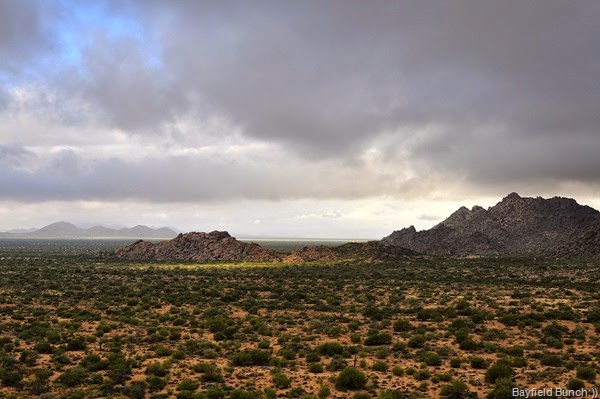 Pheebs & I explored around the top of the hill for awhile taking photos here & there.  Couldn’t see Kelly below anywhere but I could see the Jeep on the  desert floor.  Pheebs & I began our descent down the hill just enjoying the whole ambience of our cool partially cloudy & silent desert morning.  Still no sign of Kelly as we made our way past the spot where I saw her last.  Figured she might have headed back down to the Jeep but I couldn’t see any sign of her from my higher vantage point.  Pheebs & I were soon back down on the desert floor but the abundance of green vegetation obscured any sight of the Jeep.  Thought to myself it would be easy for someone to get themselves turned around & off track.  My sense of direction led me to the Jeep but no Kelly.  Oh-Oh……… 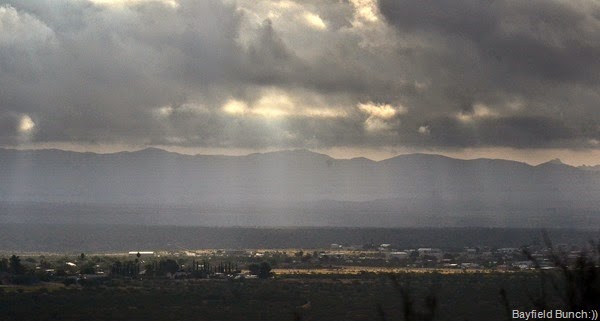 OUR VIEW OF CONGRESS ARIZONA THIS MORNING 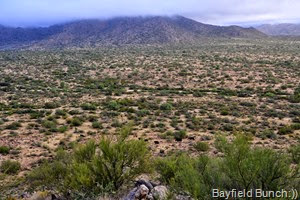 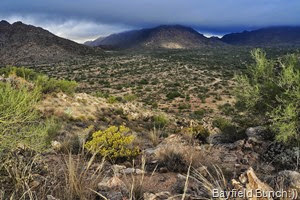 VIEWS FROM ATOP THE HILL 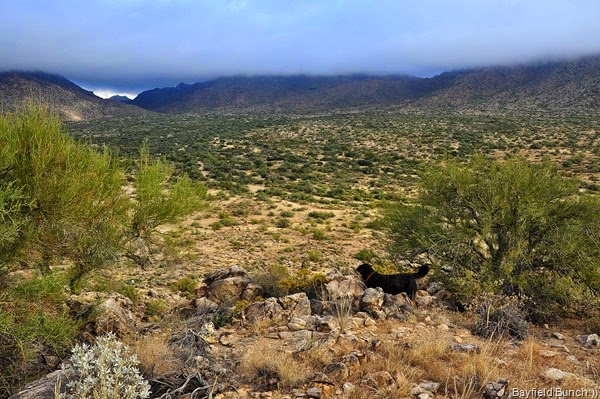 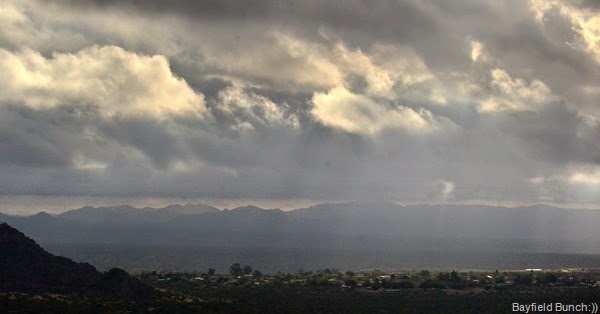 I figured just in case Kelly had got herself turned around I would sound the Jeep’s horn in a series of 4 beeps.  It was the 5th series of beeps before I heard a far distant shout.  Beeped a few more times & figured out the direction of sound & off Pheebs & I went with Pheebs in the lead with the command, ‘go find Mom’.  She was soon out of sight in the desert forest & it was not long before I spotted Kelly headed our way.  She indeed had got herself off track a wee bit but had been slowly picking her way along making her way back in the general direction of the Jeep.  She had not only found a walking stick but also a nice canteen with some water still left in it.  Only thing I had found was a pair of men’s blue underwear laying on the summit of the hill which I of course didn’t go near.  Over the years we have found many strange things in the desert. 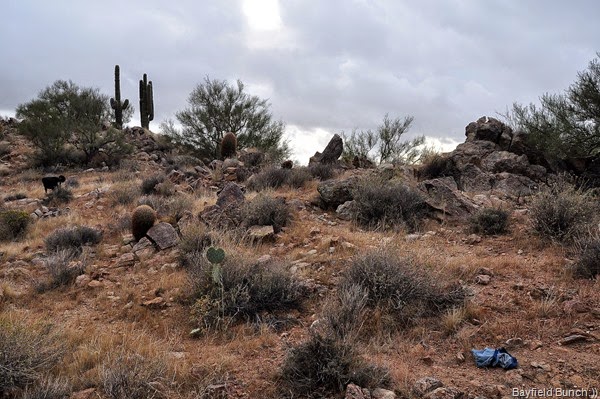 A PAIR OF MEN’S UNDERWEAR ON THE GROUND 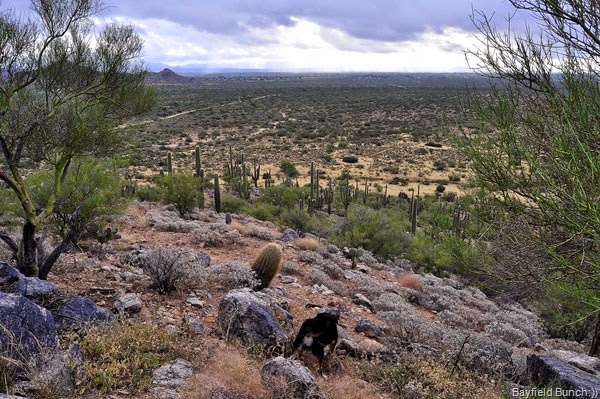 PHEEBS STARTS DOWN THE HILL 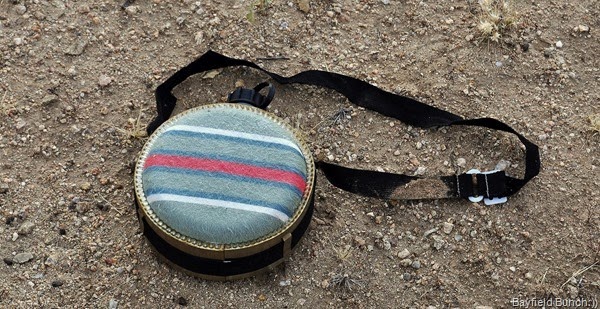 We were back home by 9 & Kelly feeling so much better today hopped in the Jeep & headed herself off to Wickenburg.  Had a couple repaired bedroom window screens to pick up at Ace Hardware & I knew she was probably going to hit some of her favorite stores so I opted out of going.  Makes it nicer for her knowing she doesn’t have impatient me sitting out in the parking lot. 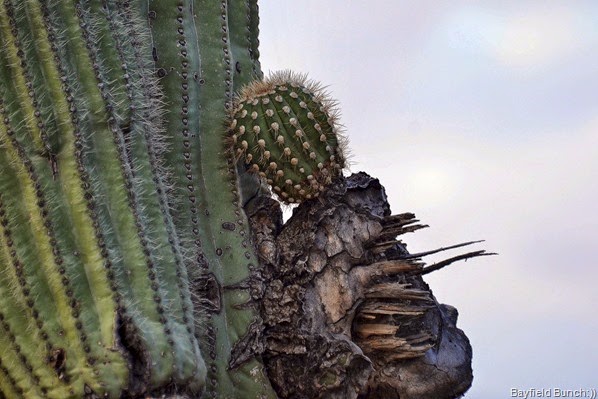 It was so nice outside today I parked myself on our front porch with my Kindle & sat reading for quite awhile.  No overbearing heat in the air & with a nice breeze I thoroughly enjoyed my time relaxing & reading on the porch.  Thought to myself, ‘now this is how it’s supposed to be’.  And I’m sure Pheebs thought so as well:)) 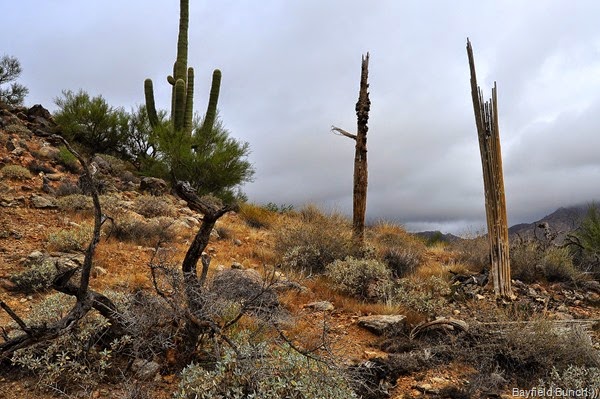 I think long time reader & our friend Pat down there in that Sierra Vista place near Tombstone & Bisbee got it right when in a comment he said, ‘Given the direction of flight of your helos (helicopters) I'd say that they were headed for the National Training Center at Ft. Irwin, NE of Barstow.  And I think reader Phil maybe had it right about their origin when he said, ‘Phoenix news on Wednesday night said a formation of 9 helicopters stopped at Scottsdale Airpark on a training mission. I think they said they were from Dallas area. I think they were Black Hawk helicopters’.  Both those points between A & B line up with my aforementioned guestimated line of flight.  Another great mystery solved & Britbabe I did think of Area 51 but determined it was too far north (Las Vegas) for the direction of flight for all those Helochoppers. THE HILL ACTUALLY ENDED UP HAVING TWO SUMMITS

Break in’s & robberies are always a worry to everyone & especially now in today’s society with all it’s growing drug problems & social ills.  Especially vulnerable are traveling RV’ers.  Sadly enough it happened to the folks over at THE GOODE LIFE while in Albuquerque New Mexico. 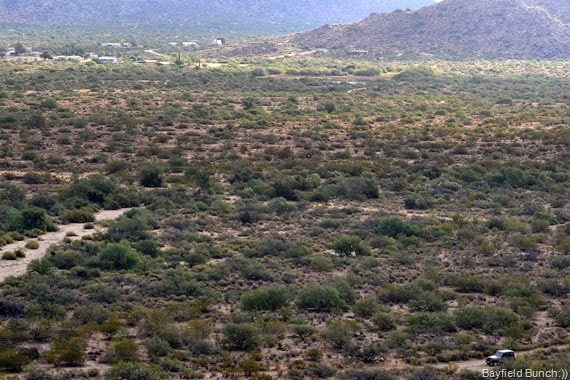 LITTLE JEEPERS IS AT BOTTOM RIGHT

Amazingly enough another Blog Follower has made it through the Googleness maze to land themselves in the Friend Connect box on our sidebar.  Welcome aboard David Davis of PHXXINGS.  Nice to have you along.  As stated in your last blog post, “Checking the blog on 3/3/11 and was surprised that somebody had found it.  Thanks.  Some day I will have to get serious about this”.  Maybe today is the day David:)) 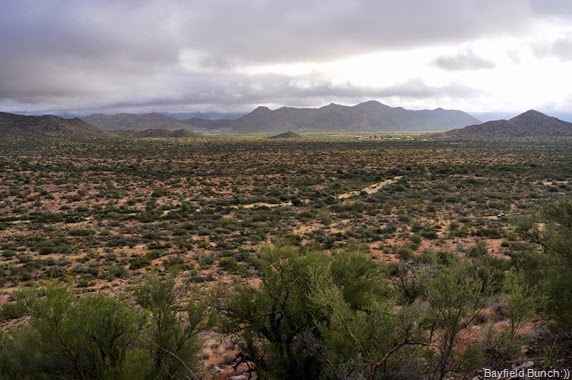 Upon arriving home this afternoon Kelly set about re-installing the two repaired bedroom screens.  I was convinced they were too big to go back into their window slots & gave up trying to help.  As usual Kelly’s patience & mechanical abilities & determination paid off & half an hour later she had her bedroom screens in place. 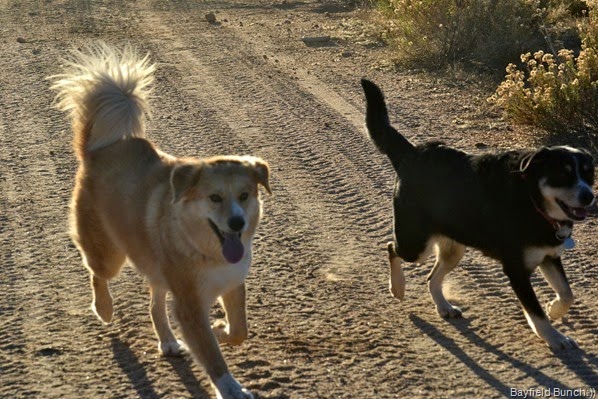 GROANER’S CORNER:((  What If The Charlie Brown Gang Had Been Allowed To Age Like The Rest Of Us…Where Would They Be Today??

Charlie Brown: Operates Good Grief Counseling Inc., which specializes in people who are just having a bad day. Moonlights as a pitching coach at high school and college levels. Married to Marcie. They have a round headed son who wears glasses.

Linus: Developer of Security Blanket Software, which is a hot item on the New York Stock Exchange. Worth millions but is actively involved in charitable causes, including the Great Pumpkin 5K Fun Run every Halloween. Only man who makes Bill Gates nervous.

Lucy: Serving her seventh term in Congress. On her third husband. Claims she hasn't thought about Schroeder in years, but the background music on her answering machine is Beethoven.

Schroeder: After years on the classical performing circuit, he runs a piano bar in Carmel, Calif. Won't let anybody lean on his piano.

Sally: Never quite got over being spurned by Linus. Has a cat named Sweet Baboo. Sells Mary Kay Cosmetics.

Peppermint Patty: Women's athletic director at a Midwestern university. Her fashion credo: "Sandals go with everything."

Snoopy: In dog years, he'd be 350. Linus has created an endowment at Daisy Hill Puppy farm in Snoopy's memory.