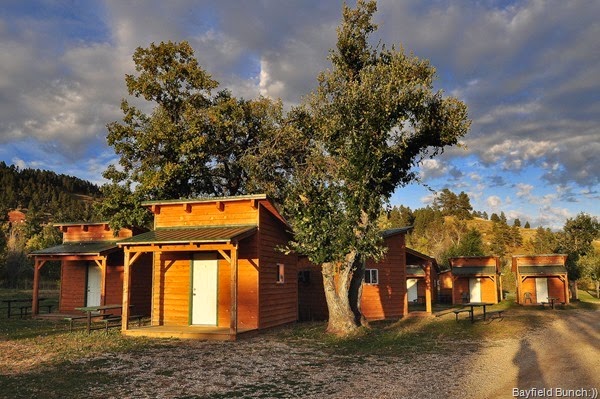 Unfortunately in my Thursday night tiredness I accidentally deleted my whole Thursday post so had to start all over again this morning.  Hate when that happens. 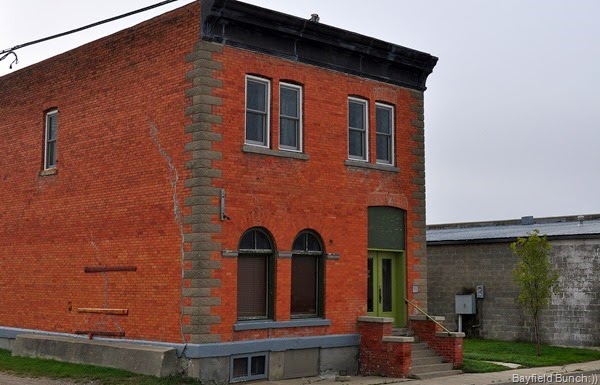 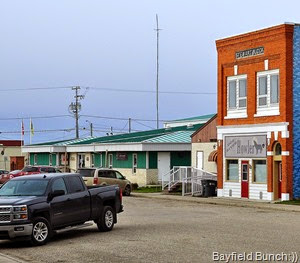 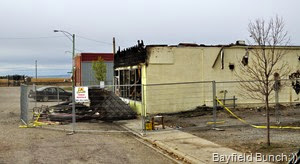 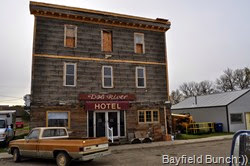 We think it was the cold that woke both of us up around 5 a.m.  Neither Kelly or I are hardy cold weather folks anymore.  I didn’t even get out of my P.J.’s, just pulled my clothes on over them.  No morning music & we didn’t even bother with coffee.  Knew if we could get the rig started we would have heat so made the decision to head on out of town & move further South.  Thanks again to our ‘battery boost’ it started.  Thought about trying to find an RV repair place in Williston but in the end we just wanted to get moving so off we headed right into the Williston morning rush hour traffic.  This seems to be a booming area so traffic was heavy but worse than traffic was all the road construction stretching for about 40 miles south down highway 85.  It was a nail biter all the way as we dodged & deeked around endless arrays of orange cones.  By the time we drove ourselves out of the twisting construction zones I was just about totally drained. 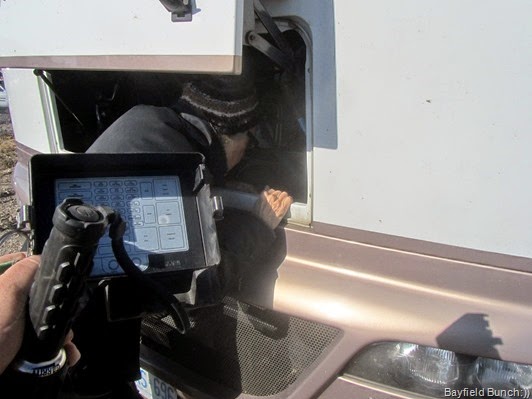 Soon as the sun was up Kelly had the coaches manuals out trying to troubleshoot our problem.  She is such a patient person with things like that.  Plugged her computer into the cigarette lighter & clicked onto a couple RV forums looking for help.  Wasn’t long & she was on the phone trying to line up an appointment with an RV repair place to have a look at our problem .  Luckily she found one in Whitehead just West of Sturgis so that was our destination Thursday morning.  Found ourselves still kinda feeling down in the dumps about not only our electric problem but the whole trip so far.  We were at least bolstered by a bright sunshiny morning with reasonable temperatures.  It is very easy to feel down when one is overtired & stressed for whatever reasons which I’m sure many traveling RV’ers well understand. 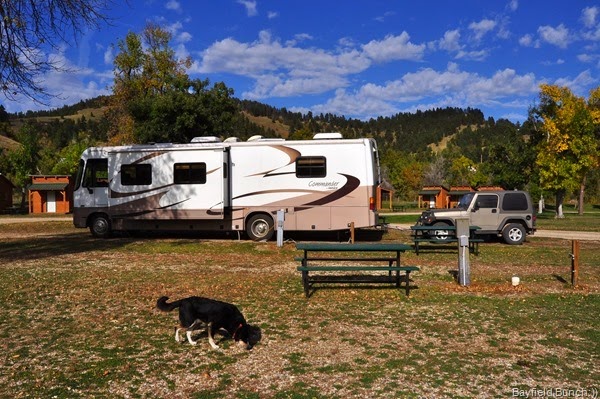 Pulled into Northern Homes & RV just West of Sturgis South Dakota.  They had the coach in their shop for half an hour & came back with the news our inverter is shot & we would need to replace it for a cost of $2,600 plus labor.  We said thanks but no thanks.  We will get a second opinion on that & I see a trip to Solar Mike’s over in Slab City coming up next month.  We trust Solar Mike to be honest with us.  Of course a trip to Slab City always means a stop in one of our all time favorite places.  Borrego Springs is just West of the Salton Sea:)) 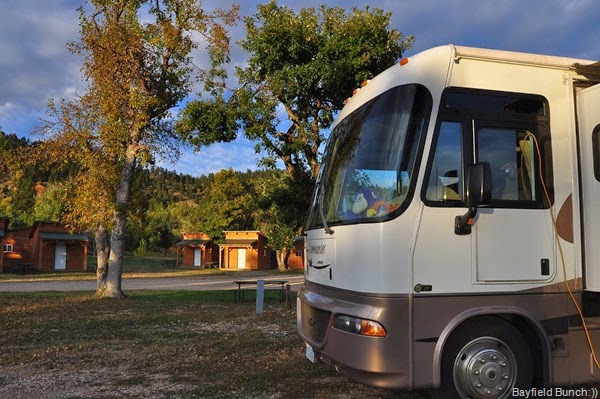 We were feeling so weary from days & days of stressful travel we decided an RV Park was in order.  Found a nice one right in Sturgis called ‘Days End’ at the intersection of highway 34 & I-90.  A few rigs parked here & there & nobody in the office so found us a quiet spot & shut er down.  Turns out we had full hook-ups for $23 a night.  Totally acceptable.  And Oooohhhhhh how nice to have running water again.  Ran an ordinary extension in through a window & we had electric.  I know I grumble a lot about crowded RV Parks but no crowding here.  It was off-season & we were happy campers.  Didn’t take us long to fire up a couple nice soothing hot showers.  We began feeling human again as our weariness quickly began to fade.  Optimism quickly returned:)) 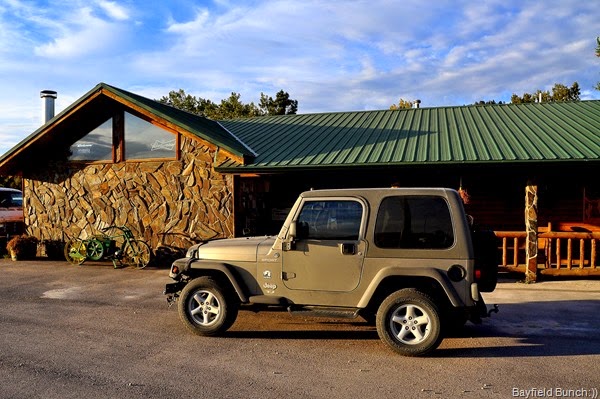 STOPPING AT THE OFFICE TO REGISTER

Our plans for the morning are to hop into the Jeep & head off to see MOUNT RUSHMORE, the town of Custer & take us for a drive through the Black Hills.  Kelly is still battling a cold & low energy levels so we’re probably going to stay here a few day, relax & just soak up some nice weather while it lasts.  Gonna enjoy some Park facilities as well. 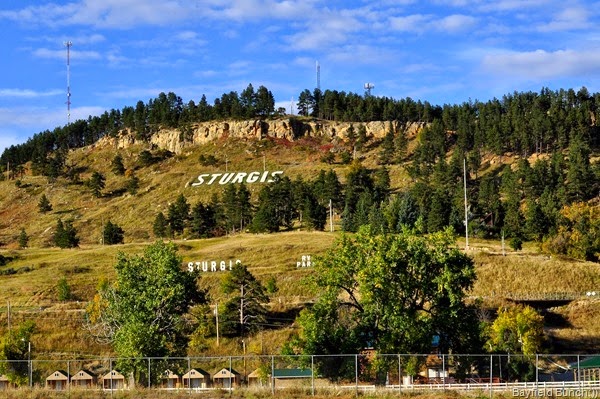 Sturgis itself seems to have a lot of bars, saloons, & various eateries.  Pretty little town with an old main street off to one side.  If Sturgis sounds familiar it may be because of the annual motorcycle rally here every year.  Summer of 2015 will be their 75th year holding this big event.  Thousands of motorcycle enthusiasts plus a few bad dudes probably thrown in for good measure too.

Now to address that ‘comment’ in our Shout Box questioning my honesty.  The comment’s writing style & tone looked familiar!!   First, as I have mentioned many times in my posts I use Facebook at the end of each day to drop my daily post in.  That’s it.  I sometimes get a few comments & ‘Likes’ so I go back in the morning to have a look.  Unless Kelly mentions to me about something she has seen on Facebook & I don’t use it & am not active on it.  And two, I had a Twitter account about 3 years ago which I used like Facebook to drop my posts in at the end of each day.  Hadn’t done that for a long time & thought I’d start again a couple months ago.  I have never sent a Tweet other than my post at the end of the day…………………………………