MONTICELLO UTAH TO CONGRESS ARIZONA…SOOOOOO HAPPY TO BE BACK:)))))))

THIS IS MONDAY’S POST…..INTERNET IS SO POOR HERE AT THE HOUSE I COULDN’T EVEN GET A SIGNAL MONDAY NIGHT

Kelly brought in her bedroom slide due to wind in the night.  By morning those winds had dissipated & never bothered us again for the rest of the day.  Rolled out of Monticello Utah about 6:45 a.m. with dawn breaking under clear skies.  Not a cloud visible anywhere. 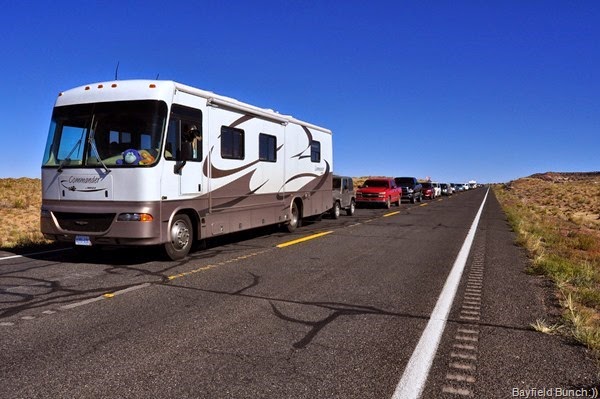 Not much traffic on 191 as we cruised southward into familiar territory.  Bluff Utah marked the spot where we headed East over to the Four Corners of Utah, Colorado, Arizona, & New Mexico this past March on our way back to Bayfield Ontario.  This morning we stopped at the Twin Bluffs Café.  We knew there was an eating place in Bluff RV Sue had spoke of but after Kelly went in she said she didn't think that was the place RV Sue had mentioned.  I snapped a photo of the twin peaks anyway. 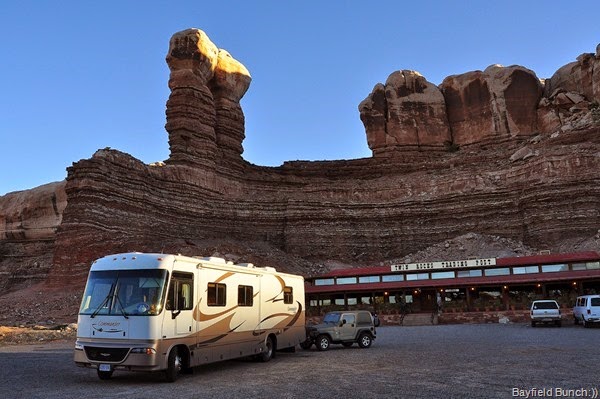 Memories of our homeward trek last March came back as we rolled past Valley Of The Gods.   Memories did not come back of the steep grades in that area & we struggled up some of them with a nearly full tank of fuel.  Gotta remember not to do that for the next time we pass that way.  Passed Goosenecks State Park where we overnighted earlier in the year.  It's a favorite in-transit stop for Pat & Mike when they travel between Custer SD & North Ranch near Congress.

Always nice driving through Monument Valley of course & the tall rock sentinels & spires stood ever so stately in the mid morning light.   We talked about taking this route home again next March & maybe hitting Capital Reef & Canyonlands on the way.  Too early for those plans yet but it did cross our minds. 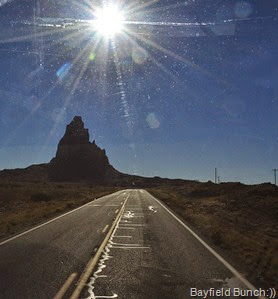 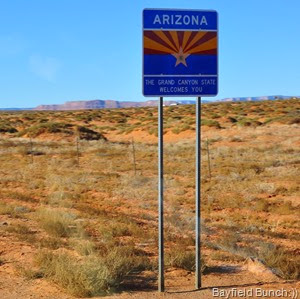 A McDonald’s coffee to go in Kayenta as we swung the rig’s nose to the South-West heading for Tuba City.  Traffic was lite, roads were good & we rolled right along.  I was soon able to make out a familiar formation on the distant horizon.  It was the San Francisco Peaks at Flagstaff.  I was pretty sure then we would be back in Congress by mid afternoon. 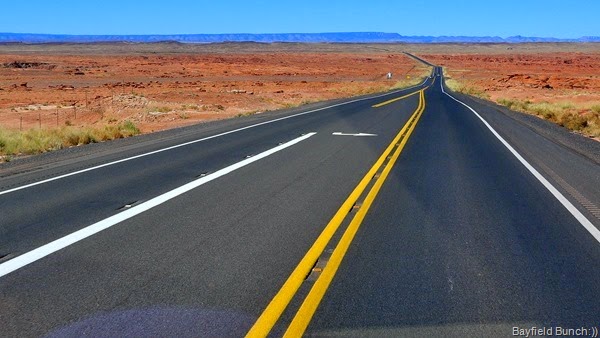 We somehow missed our I-40 turn-off in Flagstaff & temporarily misplaced ourselves.  Even with Garmin Gertie’s help we still managed to stay misplaced for probably half an hour as we trekked along old Route 66 through the city.  Finally made our I-40 connection west of Flagstaff out near Camping World somewhere.  Oh well, no big deal I guess except for all the unnecessary in town traffic we would not have had to deal with.  Nice to see the Pine forests around Flagstaff again as well.

Turned off I-40 at Ash Fork & headed on down the Chino Valley.  I’ve always like this relaxing drive.  Picked up a bit of fuel & were surprised at how downright hot it was.  If it was that hot up there on the Colorado Plateau we could only imagine how hot it was going to be at our place in the Sonoran Desert at the foot of the Weaver Mountains.

ALWAYS HAPPY TO SEE THIS EXIT SIGN OFF I-40

Didn’t get lost winding our way through the northern edge of Prescott this time & we were soon making our way through tricky & challenging hills & grades on Iron Springs Road.  What a nice feeling it was with each mile approaching our house in Congress.  And we got to see this whole area as we had never seen it before.  This is the earliest we have ever arrived in Arizona & everything is still green including the grass.  Trees still in full leaf.  Familiar names as we passed through Skull Valley, Kirkland Junction, Peeples Valley, & one of our favorite quaint little places, Yarnell.  Soon had the Big EEE in it’s lowest gear as we carefully navigated the tight hairpin curves coming down the south side of the Weaver  Mountains.  This challenging stretch of road drops ?? feet as it makes it’s way down from the Colorado Plateau to the Sonoran Desert below.  Once onto the desert floor we are only 5 minutes from our house.

KIRKLAND JUNCTION & THE T-BIRD CAFÉ, HOME OF THE MOST BEST OVEN FIRED PIZZA

Because the Big EEE is the longest rig we have ever had we decided to unhook the Jeep in a large parking area across from the Congress Fire Department.  Kelly & Pheebs then went ahead down Ghost Town Road to open our two gates.  Didn’t know which gate I would use until I got there a few minutes later.  Could see it was going to be too tight a turn off Ghost Town using our main gate so swung round the block & came in using our secondary gate on the south side of the property.  My eyes were glued to the low overhead power line but I just fit in nicely below it.  Took a little wiggling to get the Big EEE’s nearly 37 feet turned around to have the side door facing our house’s front door but with help from Kelly directing we did it.  Whether I will be able to get the rig into it’s parking spot remains to be seen.  Might give that a try later Tuesday sometime. 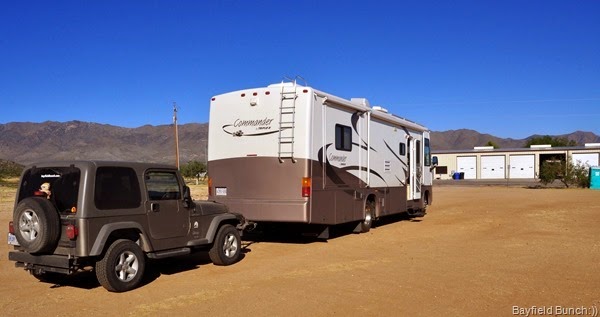 UN-HOOKING IN CONGRESS ACROSS FROM THE FIRE HALL

I saw right away our grounds were in much better shape than they were last year when we arrived.  Les had done a good job spraying the weeds & we only had patches of dried yellow grass.  Of course I right away did a quick walk around to see how my Cactus plants were doing & again much better results than last year.  I would say 75% of everything I planted made it through the long hot Arizona summer.  The Aloe Vera type plants are doing especially well as our some Golden Globe Cacti.  I’ll have a closer look at things Tuesday.  Got some water out for the birds & will have to get the feeders out right quick.  Gotta get all my feathered friends back again.  Love watching those guys. 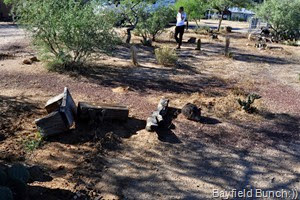 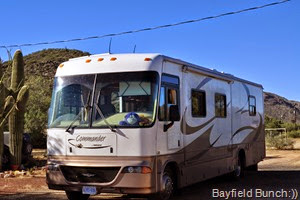 Inside of the house looked exactly as we left it & everything was fine.  Turned the water & main breaker on & we were good to go.  We’ll set up the TV satellite dish Tuesday.  Soon as the hot water tank was hot I was right into my walk-in shower for a long welcome splash.  Ahhhhhhhhhhhhh:))

HAPPY TO SEE EVERYTHING LOOKING MUCH BETTER THIS YEAR THAN LAST

Just sooooooooooooooooooo nice to be here.  Warm night with a ka-zillion million stars overhead.  The Milky Way’s river of stars stretched almost from horizon to horizon.  First time I saw it since we were here way back in March.  As I type this Pheebs is asleep on my big bed, I can see our big Saguaro Cactus outside my bedroom window, nice ambient tunes on our Sirius Satellite Radio & a chorus of Crickets surround our house.  Just so happy to back at our digs here in the great American South-West:)))))) 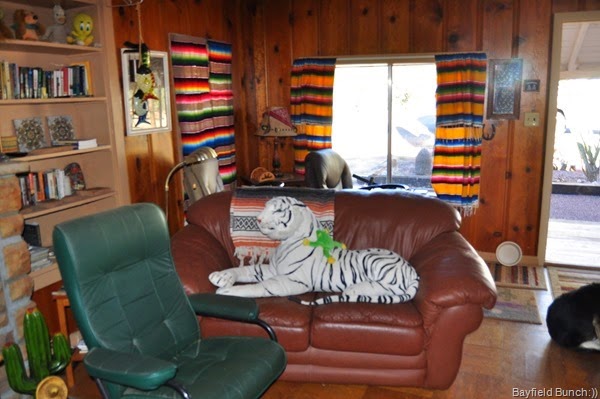