WE HAD QUITE A CHALLENGING TIME ON THE ROADS TODAY

This is Friday’s post.  Due to a very slow internet connection I wasn’t able to publish this post until Saturday morning.

Don’t know when in the night the cattle truck rolled in but in a semi-doze state I thought I had fallen asleep in a cow pasture.  “The Mooooo-Moooooing” went on forever.  Felt so sorry for the cattle in the truck beside us somewhere.  Thanks to our Bovine friends my day began at 3 a.m.  In hindsight we should have stayed at the Walmart parking lot & toughed it out with the Walmartians.  Our outside temperature was 37F.  I think our inside living room temperature must have been about 38.  Well at least it felt that way to me:(( 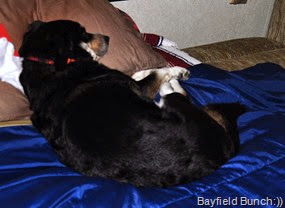 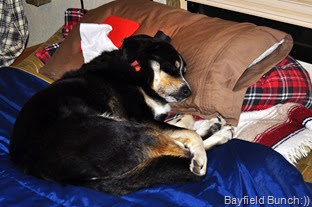 Had to un-hook the Jeep so I could back out of where we were at the Petro Canada.  A trucker, showing his obvious displeasure at us being here pulled in nose to nose preventing us from driving ahead.  There was room for him to park alongside the other trucks but this fella had to make his point I guess.  It’s just the way it is with some people. 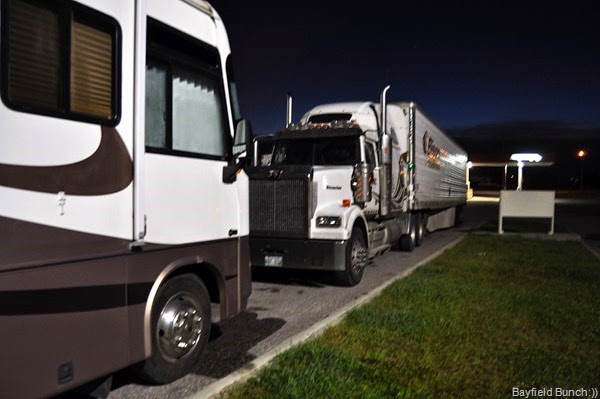 Moved the rig away from the truck area & shut things down again.  Hauled out our reading material & waited for the sun to burn off the morning fog.  Yes I did just use the word…..SUN:))  But alas it didn’t last long.  Less than an hour after leaving Dryden we were into heavy cloud, rainy drizzle, & more fog.  By the time we reached Kenora Ontario around noon it was a full blown rain hinging on the verge of snow.  It was 34F.  Pulled into a Walmart parking lot & shut er down for a bit.  Needless to say the past 5 days of crappy weather has us in the dumps a bit.  Despite the obvious beautiful scenery all around us I just didn’t feel much like even picking up my camera today. (but did anyway)

About 10 miles west of Dryden is a place called Oxdrift.  Well actually it can hardly be thought of as a place.  One General Store on the highway pretty much sums it up.  If it weren’t for the sign saying Oxdrift you would never know you had actually been there.  But for me this morning I did have a reason for being there.  Kelly had followed Pheebs & I in the rig from Dryden & we parked the rig in an old abandoned school yard.  School closed down 10 years ago but the basket ball nets are still up.  I have blogged about Oxdrift several times before over the years.  In my post titled WHEN I GET GROWED UP I WANT TO DRIVE A BIG YELLOW BULLDOZER you can catch a few of my paragraphs on Oxdrift about half way down.  Also another Oxdrift paragraph near the bottom in this post entitled, IF IT WOULDN'T HAVE BEEN FOR DOING NOTHING.  It’s been about 60 years since I had my feet on the ground in Oxdrift & this morning it was a trip down memory lane for me.  Showed Kelly the railroad crossing where my Mother & I were nearly killed.  She was just learning to drive back in 1954 when she lurched my step Dad Irvin’s 53 Ford onto & barely over the train tracks when a West bound freight train narrowly missed the rear end of the car.  Just yards away there once stood Oxdrift’s general store called Fotheringhams.  We kids all went to a one room school house & ?? Fotheringham would sometimes take his Shetland Pony to school & give me a ride.  Down the highway a stretch I showed Kelly the old Stewart farm where we lived in a long trailer for awhile.  Pulled in the driveway & sat in the barnyard for a few minutes.  It was all as I pretty well remembered it except the the old farm house is now abandoned.  Barn looked the same.  I still have many memories as a small boy playing in & around that yard, barn, & house.  The farm was known as ‘Granny Stewarts’ & in the above links I talked about some of my memories there.  Back out onto the Trans-Canada highway & up a short distance to the first crossroad.  I remembered the little one room school house not far down this road but alas, it was gone.  A newer house now stands in it’s place.  Yes, many many fond memories in this area from the mid fifties.  I have thought for many years of one day stopping here again & today was that day.  Not likely I will ever be there again.  It seemed fitting as clouds descended wrapping us once again in a drizzly mist.  Back to the rig & hooked up the Jeep.  It was time to say a final farewell to my old childhood chum.  Thanks for the wonderful memories Oxdrift.  I will always remember you for as long as I can……………….. 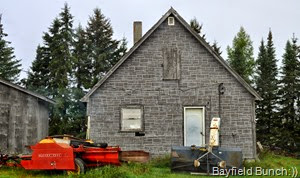 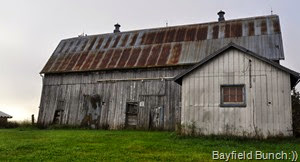 BOTH HOUSE & BARN ARE JUST AS I REMEMBER THEM 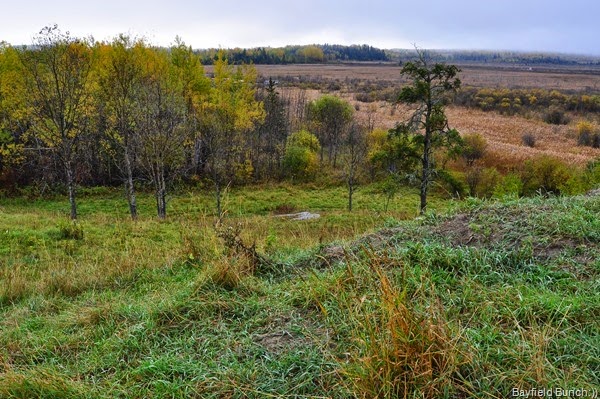 The further west we traveled the worse the day’s weather seemed to get.  Temperatures dropped & the rain was steady.  Neither of us had slept well Thursday night so we decided to pull off the Trans-Canada into Kenora & take a brake.  We was whupped……but not as whupped as we was about to get later.  Stayed in the parking lot for couple of hours & considered staying for the night.  Another check of the weather & the fact we were just less than 200 miles from Winkler Manitoba with the promise of electric & water at that the other end was the deciding factor so off we went.  Snow showers had just begun but the heck with it…..we were heading for Winkler. 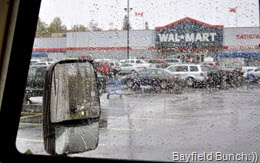 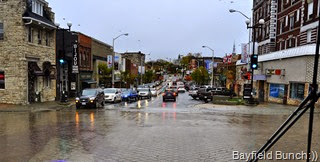 Weather continued to deteriorate & about 10 miles west of Kenora we were suddenly ambushed by high wind gusts rocking the coach.  Wet snow became heavier & it was all hands on deck as we plunged forward into the buffeting wind & snow driven rain.  As long as the slushy snow didn’t turn to sleet I knew the road was not icy.  The landscape had also flattened out considerably so at least we didn’t have grades & curves to deal with on the now straighter highway.  We fought those miserable conditions all the way to the Manitoba border before we began seeing a lightning of the sky on the Western horizon. 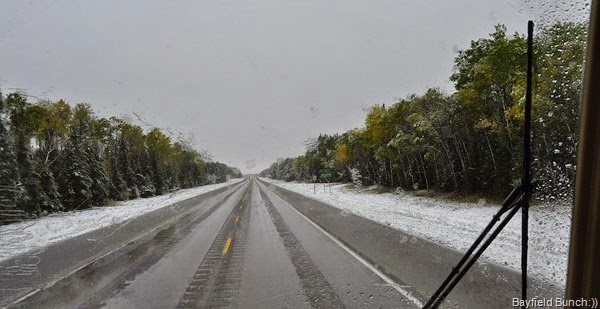 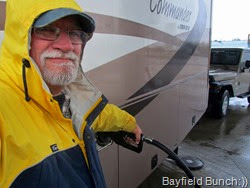 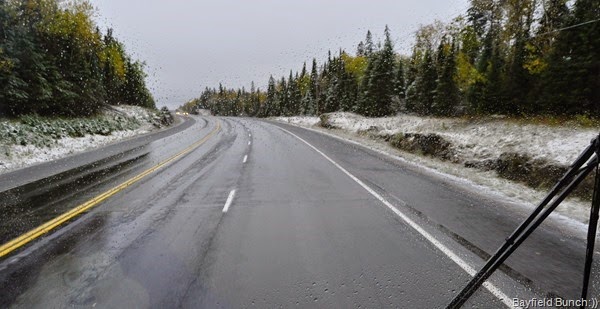 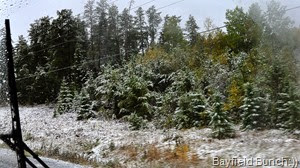 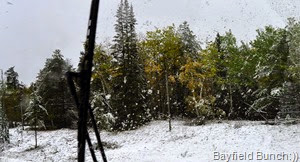 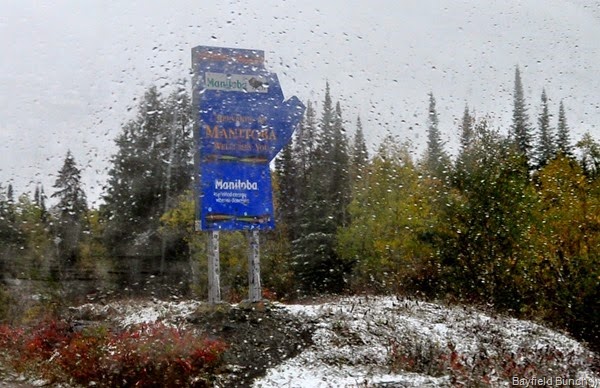 The slushy snow turned to rain which finally began easing up & by the time we were out of the Northern Ontario forests & onto the Prairies it was obvious we had driven out of the storm.  Cloud cover continued to break up & we began seeing patches of Sun.  But now we had a new problem……Prairie winds!! 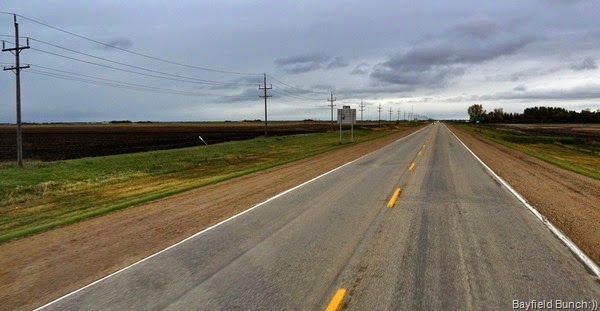 YEP WE’RE OUT ONTO THE FLAT LAND PRAIRIES NOW 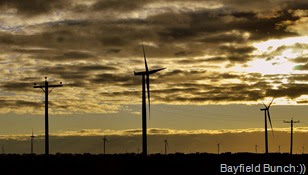 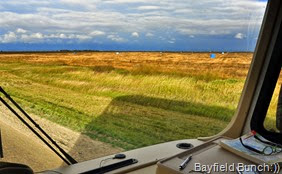 MANITOBA HAS WIND TURBINES TOO & WOW…..SUNSHINE:)) 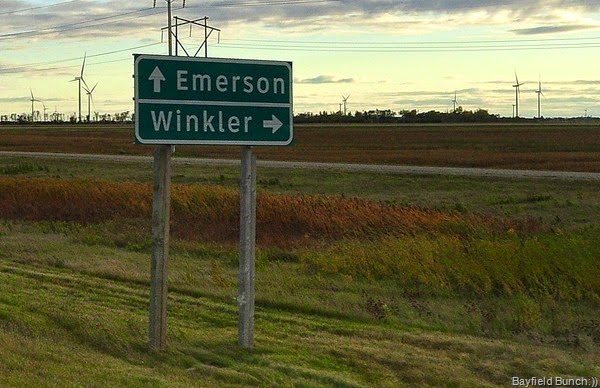 AND OH NOW NICE TO FINALLY SEE THIS SIGN

Turned south off the Trans Canada highway & began a zig-zag pattern heading South West towards Winkler.  The brutal winds whipping across the flat land from the North West hit us on the front passenger corner down along the whole side of the coach & we feared for our awning being torn out.  Happened to us before in 08 with the Damon & we knew how fast it could happen.  When traveling in a westerly direction I had to hold our speed down to 45 mph because we could see the awning arms waffling.

Oh how nice it was to see a sign pointing in the direction of our destination in Winkler Manitoba.  Nice sunset ahead of us as we steadily closed in on the manufacturer of our big Triple E Commander.  What a great feeling to finally enter the east end of town.  Little bit of a problem finding Triple E but finally there it was.  Big buildings on both sides of a short street.  Pulled into a parking lot & unhooked the Jeep.  Drove around with the Jeep until we found the customer service area where folks park their rigs for service.  Minutes later we were backed in, plugged in & watered up.  And everything worked.  It was 7:15 p.m.  What a day, what a day & boy was we whupped…………. 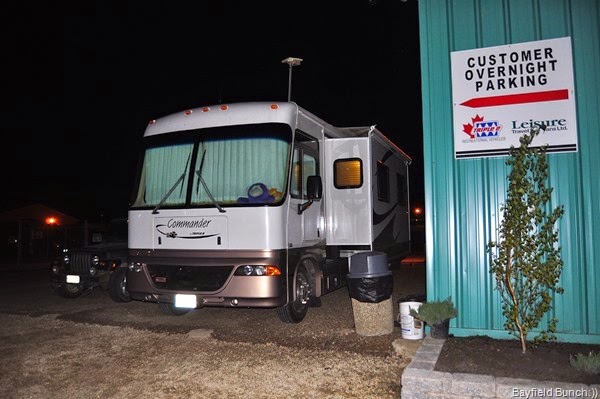 GROANER’S CORNER:(( Everyone should be aware that there is a possibility of another outbreak of swine flu during the next few months. Please be conscious of the indications that you or members of your family may have contracted the Swine Flu Virus. The symptoms associated with this disease are:
1.) Sore throat.
2.) Slight headache.
3.) Moderate to high temperature.
4.) Nausea or upset stomach.
5.) Uncontrollable urge to roll around in the mud.