CAMPED OUT IN WINKLER MANITOBA AT THE TRIPLE E LEISURE VAN MANUFACTURING PLANT….Brrrrrrrrr:((

Slow internet connection where we are parked here at Triple E in Winkler Manitoba & for that reason was not able to finish publishing Friday’s post till Saturday morning.  Took over an hour.  It was cold & windy here at 36F first thing Saturday morning.  No TV channels. 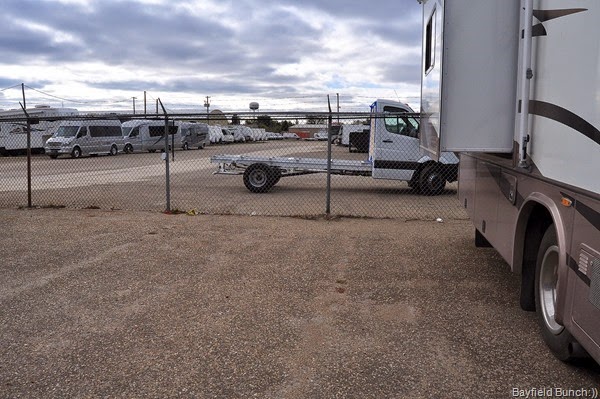 THAT’S US ON THE RIGHT 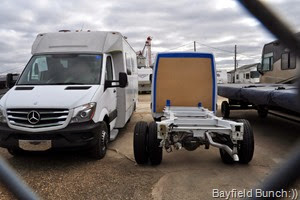 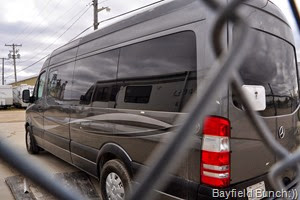 MOST PHOTOS TAKEN THROUGH A CHAIN LINK FENCE

We are parked in Triple E’s customer service area with electric & water.  We carry a small ceramic heater with us so Pheebs & I were finally warm last night.  Thoroughly enjoyed a longer hot shower this morning as well.  Facing East it was nice to see & feel a big morning Sun streaming straight through our big windshield into our coach.  Despite the driving conditions Friday we sure are glad we made the decision to head on over to Winkler Manitoba from Kenora Ontario.

Feeling the need for a Pizza breakfast we all hopped in the Jeep & headed on over across the road to what appeared a fairly large mall.  Had seen a sign saying Dominos Pizza so that is where we ended up for breakfast.  Sitting in the Jeep eating Pizza……with the heater going full blast I may add.  A bit too much spicy sauce of the Pizza for us but darned if we didn’t just sit right there in the parking lot & eat most of whole darn thing.  Say did I mention how cold & windy it is again with the sun making only very rare appearances behind yet another cloud cover.   Actually there was some warmth in the sun & had it not been for the cold wind today I might have considered washing the Jeep. 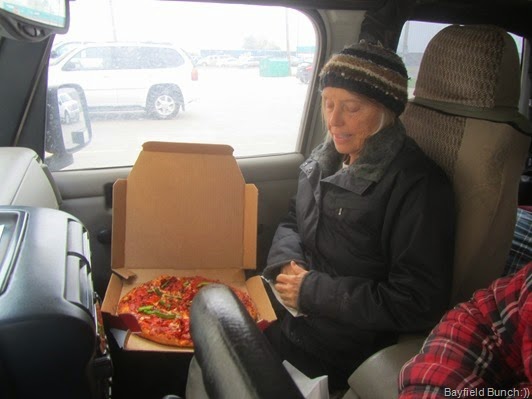 I’M SURPRISED PHEEBS DIDN’T HAVE HER NOSE IN THIS PHOTO, SHE’S IN THE BACK SEAT

Decided to take a spin around town & quickly found out Winkler is much bigger than we had thought.  Very spread out across the flat prairie land.  Surprised at both the French & Mennonite influence here in these parts.  Guess some of us Ontarians simply don’t know a lot about our closest neighbor folks right next West of us.  Surprised at the bustling amount of traffic in Winkler.  The Mall we were in reminded me of a fast & furious game of ‘bumper cars’ going on.  Didn’t seem to be a lot of rhyme or reason for people coming & going to wherever it was they were going to or coming from.  In contrast to that we found a nice quiet community Park with RV parking for maybe a dozen or more rigs.  Water, electric, & sewer.  Big grassy area for pets as well.  Probably better internet & TV signals too.  I think our problem could be the big metal building we are tucked in beside. 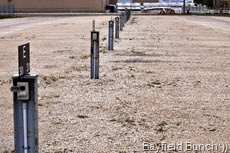 With no TV & exceptionally slow internet we had no choice but to turn to our reading devices & for me it was my Kindle.  Still reading the trials & tribulations of singer/songwriter Neil Young.  Sure gives a revealing look inside the lives of many popular singers, songwriters, & groups years ago.  As much as we all love the music of Crosby, Stills, Nash, & Young it is truly amazing any of that music was ever made in the first place.  As serene & peaceful as that group appeared it was rife with chaos, drugs, egos, & in fighting.  Especially the rampant drug scene.  Why more of those finely talented people never died from drugs back then who knows. 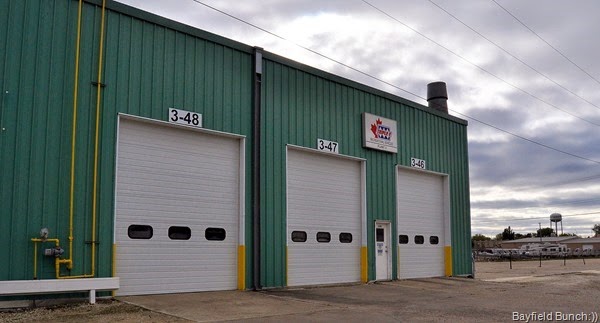 Not much more to write about today.  We just basically hung around in the rig where it was warm.  Just too cold & windy to step outside but we did manage to get Pheebs out for a few stretches when the sun was out.  Walked around the TRIPLE E complex.  A number of large buildings cover quite a few acres here.  Mercedes Benz chassis seems to be the cab of choice for their Leisure Vans.  Did see a couple Chevy vans.  Triple E stopped making the larger Class A coaches like ours in 2008/09 but thankfully will still service them. 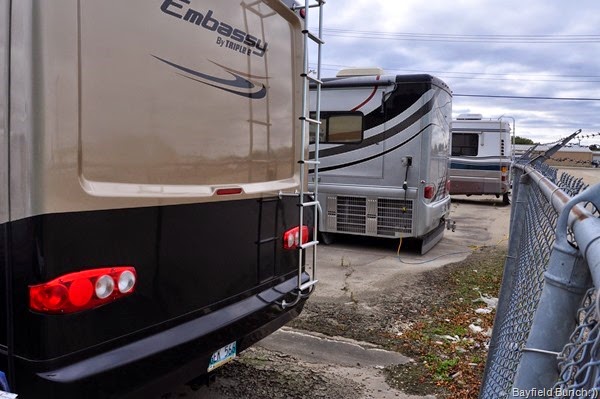 Winkler is located at the junction of highways 14 & 32 with Triple E on the West side of 32 about a block south of 14. Lots of traffic going by on #32 highway which runs south to the U.S. border.  The American border appears to be not that far away.  Winkler is South-East of Winnipeg. 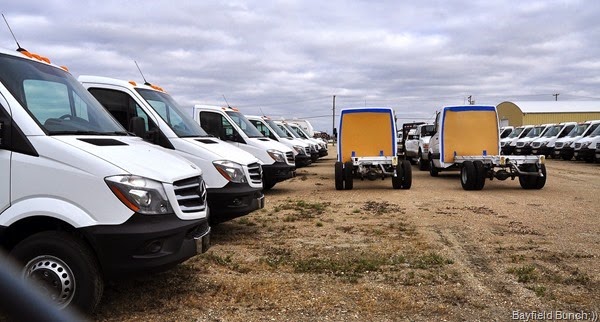 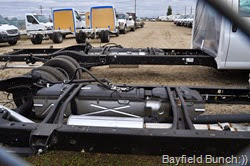 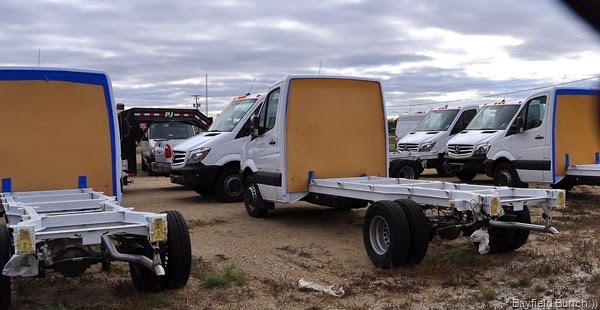 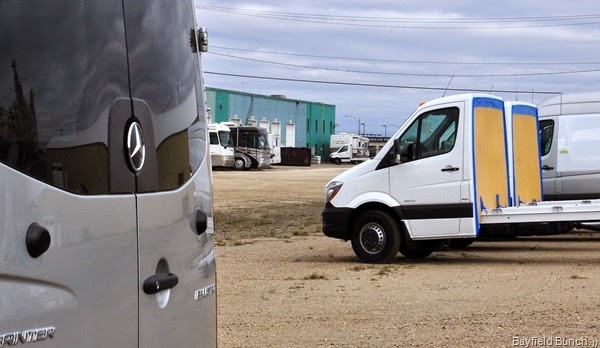 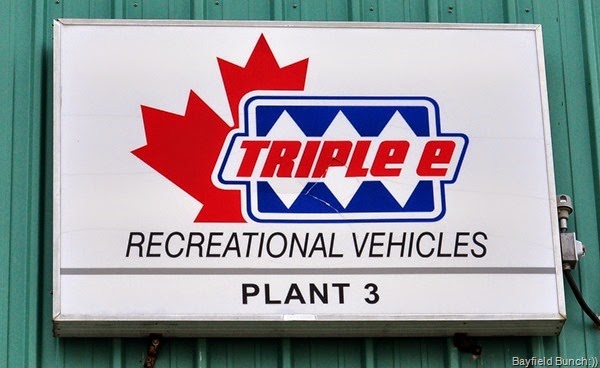 GROANER’S CORNER:((  The New York Times, among other papers, has published a new Hubble photograph of distant galaxies colliding. Of course, astronomers have had pictures of colliding galaxies for quite some time now, but with the vastly improved resolution provided by the Hubble Space Telescope, you can actually see the lawyers rushing to the scene.