More reports coming out about the shooting in the Hullett Marsh north of Clinton Ontario.  Seems it was a targeted shooting.  The man shot to death is from Toronto & is vice president of a large construction consortium in Etobicoke.  Seems a blue car drove up to him & his wife in the Marsh & he was shot.  The shooter has not been found.  We know the Manager of the Hullett Marsh & Kelly did send those photos I had in the blog to him. 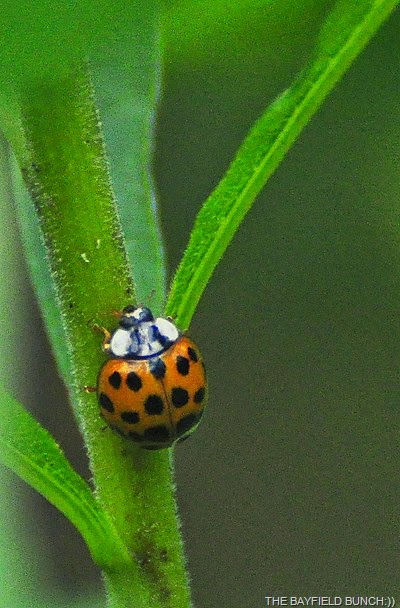 Amazingly enough despite my reclusive latter years & hermit like ways I do have a few true & trusted friends left.  Friends I feel comfortable enough with to let my guard down & have meaningful at ease conversations with.  One of those best friends lives just a couple hundred yards from me but we don't make it a practice to hang out together.  Richard is every bit as reclusive as I am & trying to get a couple recluses together long enough for a meaningful chat can be a bit of a chore.  We have our short little occasional chats when we bump into each other around the Park here & there & we do have our occasional 4 hour coffee blow out every summer.  This morning we agreed it was time for another most enjoyable Yak Fest.  Richard drove & we headed ourselves up to Goderich.  Picked up a couple coffee’s & carrot muffins at Tim Hortons & headed on down to the beach.  Nice just sitting in the van by the water.   We cover a lot of bases & there are no breaks in our conversation.  Richard & I are both realists so we are always on the same wave length understanding perfectly what the other is talking about.  Everything is right to the point & we both very well understand the conversational path we are on.  I immensely enjoy these talks & always come away from them feeling very good inside…………. 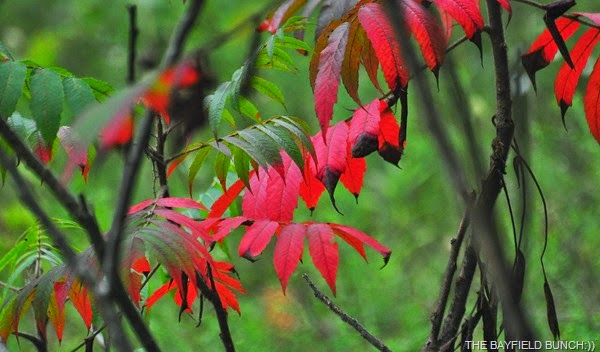 I'll be meeting another true & trusted friend shortly & we too will be off like a couple of manic magpies in another 4 or 5 hour in depth coffee blow-out.   We call them coffee blow-outs from the days we would consume vast amounts of coffee in our many mind melting sessions.  Jim doesn't even drink coffee anymore & I will only have one coffee in the whole time we are flapping our gums.  Again it is a non stop conversation from which I always emerge feeling better.  And I should emphasize it is conversations I have with these two friends, not story telling or small talk & not one sided where one does all the talking & the other is stuck having to do all the listening. 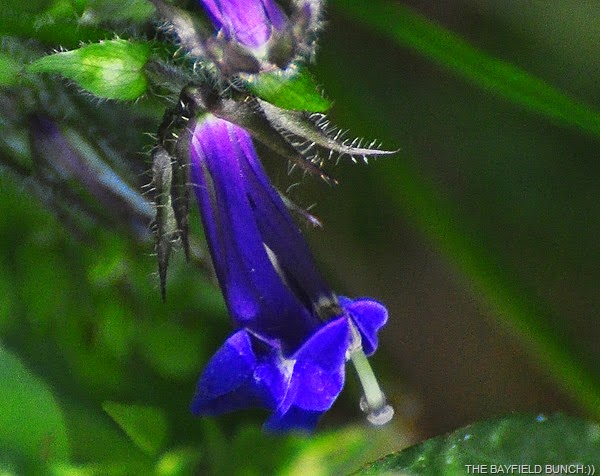 I’m a little short on words tonight so I’ll just wrap it up with an Archive Memory.  Wrote this in February of 2011 & it is quite clear in this post what I really think about America’s South-West.  And I might add my opinions have not changed one bit since writing this.  Decided to throw in some photos from our stop at the WHITE SANDS NATIONAL MONUMENT near Alamogordo New Mexico as well. 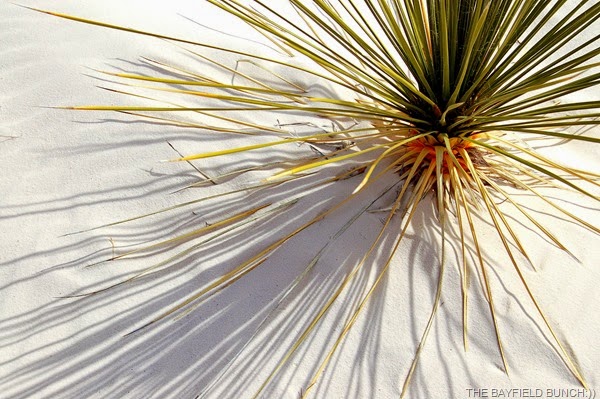 NOVEMBER 26TH 2008
ARCHIVE MEMORY:: Written in February 2011………………The lifestyle between our home in Ontario & Arizona is so totally different that it is like stepping back into the past for us every time we travel into the great American South-West.  I sometimes refer to it as having to put our southwest heads on & look at things with our South-West eyes.  Ontario & Arizona are so different in so many ways.  And, it is that change I find so interesting, invigorating & luring. 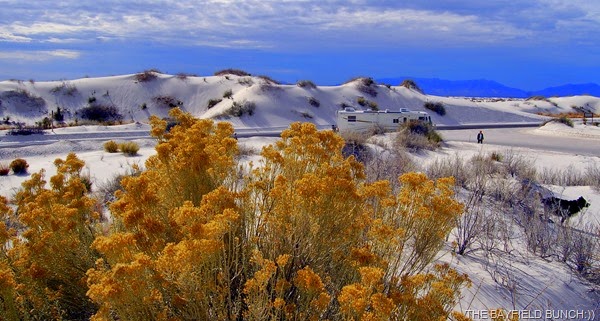 YOU CAN SEE OUR DAMON CLASS A, KELLY, & CHECKERS IN THIS PHOTO 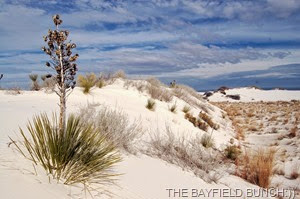 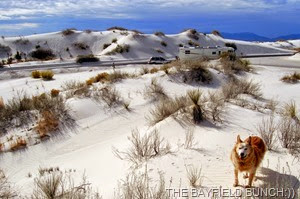 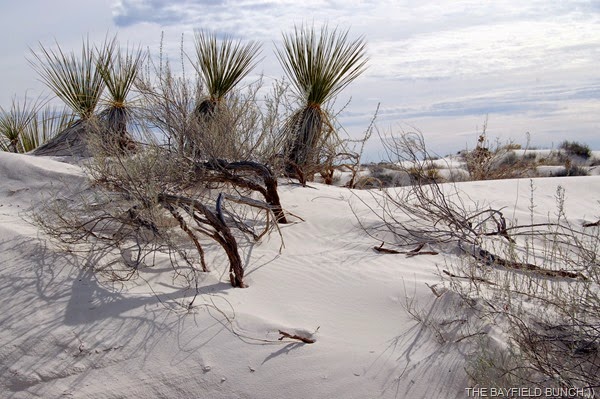 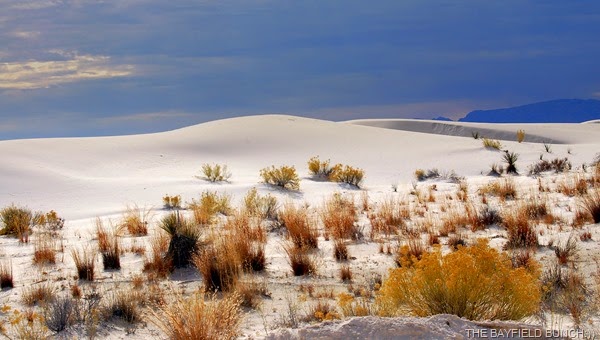 SCHOOL KIDS PLAYING IN THE SNOW…UM, I MEAN SAND:)) 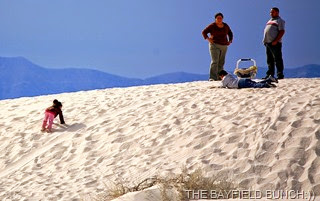 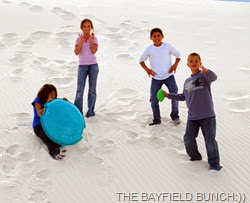 We find people very friendly & laid back in the South-West.  Not nearly as many rules & regulations here as back home & I like that.  In the small towns there is still a wild west flavor & a closeness amongst the people.  For anyone who has read any South-West history they will know that is how the west has always been.  People could only survive by helping each other in the violent & turbulent times of the late1800’s especially.  There is a sense of that still present because life can be harsh in them there parts.   I’m not talking about the large towns & big cities, I’m talking about the dusty little towns & burgs out in the rustic & quaint wind swept desert backcountry.  Out there where you can see for miles & miles in any one direction & not set your eyes on a single car ahead or behind you.  People don’t look at you funny if your wearing a 30 gallon cowboy hat or have your boots on backwards.  If you want to grow your hair down to your knees that’s just fine because there are lots of good old down to earth characters in the west looking just like that & I like their sense of freedom.  Doesn’t matter if you got a ripped shirt with an acre of dust in the top pocket or if you have an old beat up Ford truck with half a dozen mis-matched or missing fenders, a dark hole where a headlight once shone oughta 20 years ago or a couple dozen dents in what once was looked at as an actual paint job one time.  Or bullet holes in the doors for that matter.  Half a dozen cracks in the windshield is alright too.  I like the idea a feller can just kinda fade away & become a part of the landscape. I love this southwest lifestyle, feel totally comfortable here & fit right in like an old gray weather beaten barn board on a tumble down 49’er miner’s shack. 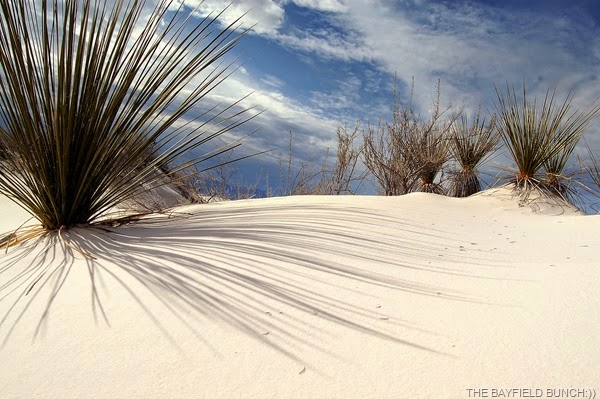 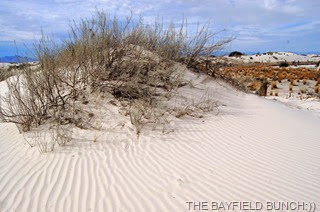 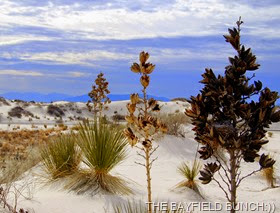 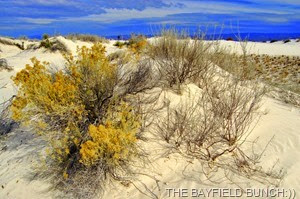 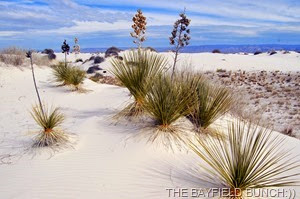 Aside from the scenic advantages of spending the winters in the southwest we have always known how much healthier it is than staying trapped in a house by the ice, snow & harsh freezing temperatures of a northern winter.  I was first hooked on the southwest back in May of 1992 when I made a fairly quick trip to Utah & back.  Kelly & I rocketed to & from Big Bend Texas during a Christmas Holiday break in December of 2004.  We had a Class C at the time & that trip sealed our love for the South-West.  We have returned to New Mexico, Arizona & California every winter since beginning our Snow Bird travels in earnest back in October of 06.

We have friends back home who have never been anywhere south in the winter & have no interest in going south despite being retired & financially stable.  That is a hard one for me to understand.  After having spent well over 60 years enduring all the aspects of full blown Canadian winters I do not want to ever have to do that again.  We have had enough of being trapped indoors day after depressing gray day by blinding snow storms, freezing rain, closed highways & power outages, etc.  In the South-West we can be outside about 99% of the time walking, hiking, day tripping, working on outside hobbies, soaking up warm sunshine, rock scrambling & all the time being surrounded by beautiful scenery, sunrises & sunsets.  We are not stay inside television people so the South-West is a natural & healthy place for us to be while we are still able.  We know this will not last forever but while we are healthy & still have control over our lives & destinations we will not be sitting around on our cans in Canada during the winter!!  We know the sands of time are not in our favor anymore but we intend to hang onto that southern hourglass for as long as we possibly can…10-4:))

GROANER'S CORNER:(( A young officer is working late at the Pentagon one evening. As he comes out of his office about 8:00 p.m. he sees a General standing by the classified document shredder in the hallway, a piece of paper in his hand.  "Do you know how to work this thing?" the General asks. "My secretary's gone home and I don't know how to run it."  "Yes, sir," says the young officer, who turns on the machine, takes the paper from the General, and feeds it in.
(PAUSE)
"Now," says the General, "I just need one copy....."
Posted by Al Bossence at 9/15/2014