I LOVE SCHMOOSHY SO I ATE THE WHOLE DARN THING:)) 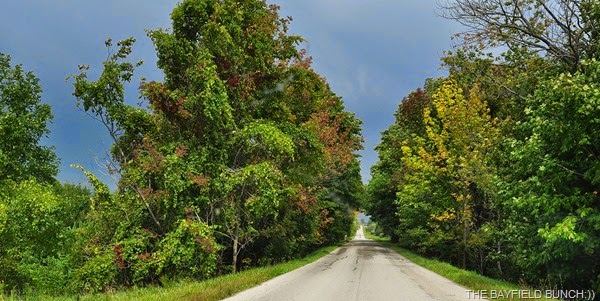 I heard three distinctive metallic buzzing bangs.  It was high noon & our power went out.  And it stayed out.  Winds were gusting in off the lake waving tree branches around, there was thunder in the sky & I had a feeling it was probably raining somewhere nearby.  It was.  My guess at the power outage was a blown transformer.  Power company said power would be restored in about 3 hours.

Had been a nice morning on the mild side.  A few more things into the Motorhome, a few more things off the porch into storage for winter.  Kelly was over at neighbor Monica's helping with a computer problem when the power went out.  Of course that just made the problem worse when they lost all the progress they had made. 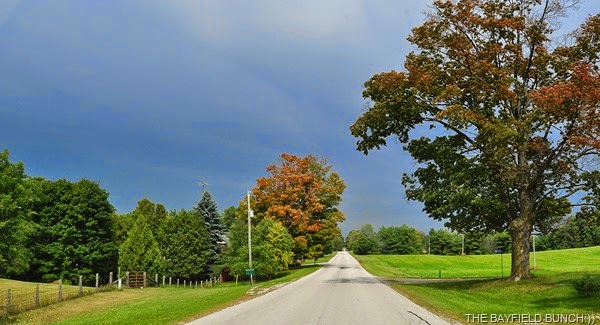 SIGNS OF AUTUMN ON SOME OF OUR ROADSIDE TREES 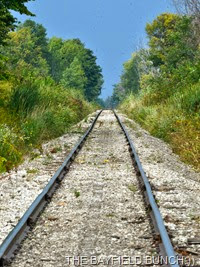 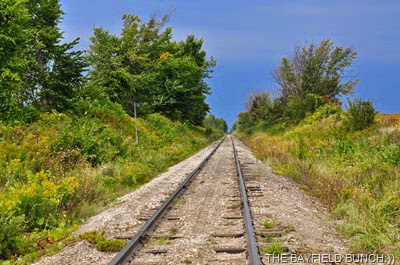 Elections for Mayor coming up in Bayfield next month so Kelly headed into town to attend a candidates meeting at the town hall.  She was curious to hear the candidates speak.  With no power in the house & no interest in politics Pheebs & headed off to the beach in Goderich.  Besides, who wants to sit around in a stony silenced music-less house anyway.

With today's winds & stormy skies I figured Lake Huron's waves would be up & maybe I could grab a few photos while Pheebs has a romp on the beach.  And that’s what we did.  Picked up a coffee & a carrot muffin at Tim Horton's on the way & we were soon on the beach.....in the rain.  Luckily that water falling from the sky didn't last long.  Watched a couple fellas trying to launch a big wind surfing sail.  Try as they did they only got it into the air once & the fella hanging on to it immediately fell off his surfboard.  That put a damper on the day for them.  Packed up their gear & headed home. 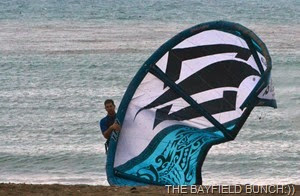 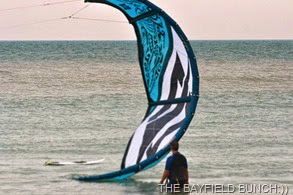 TRY AS THEY DID THIS FELLA JUST COULD NOT GET AIRBORNE

PHEEBS & I WATCH FROM A DISTANCE 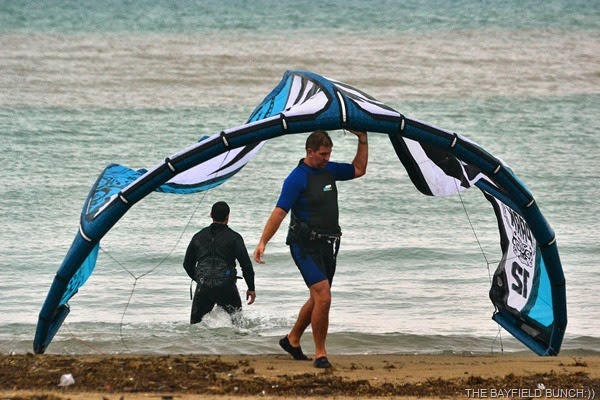 FINALLY ENOUGH WAS ENOUGH AS ONE FELLA HEADS INTO THE WATER TO RETRIEVE HIS SURFBOARD & THE OTHER FELLA CARRIES THE SAIL BACK UP THE BEACH
Nice to feel a warm off shore breeze rolling in.  Always nice to hear waves coming ashore as well.  Pheebs was very careful not to get her paws wet.  I was very careful not to drop my muffin crumbs all over the place. 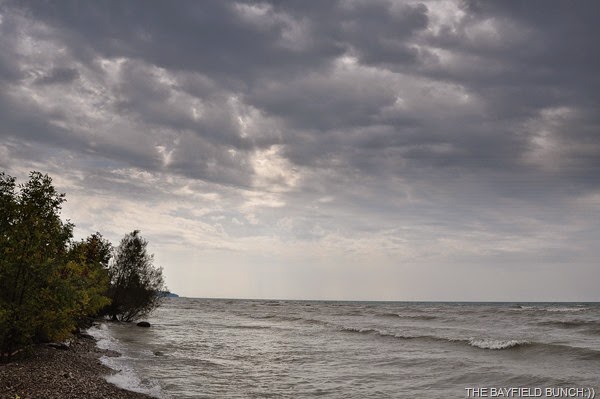 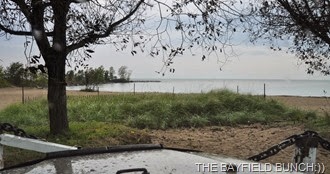 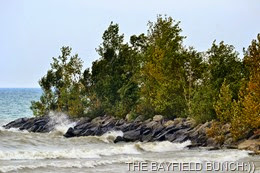 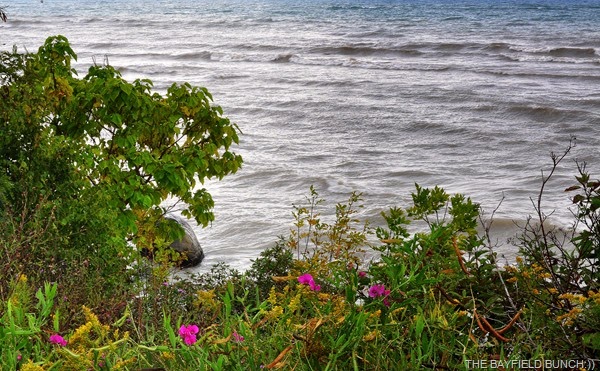 Pheebs & I were home by 2 & happy to see the power back on.  Soon replaced that stone cold house silence with several sources of groovy music.  But it didn't last long.  About 4:45 our cable TV & internet went out.  Stony silence again.  Out to the Motorhome & retrieved my headphones, plugged into my laptop & soon had my ears a-rockin again.  Our internet remained out till about 6.  Luckily Kelly had just picked up a DVD at the Library Friday.  Called 'The Fault In My Stars' she finished the book a couple days ago.  I watched it for a bit but just couldn't get myself into the movie.  Back on with my headphones & cranked up some Saturday night country music.  Laptop on the top side of my lap as I tapped out tonight's post. Internet back on sometime around 6.  All is right with the world again:)) 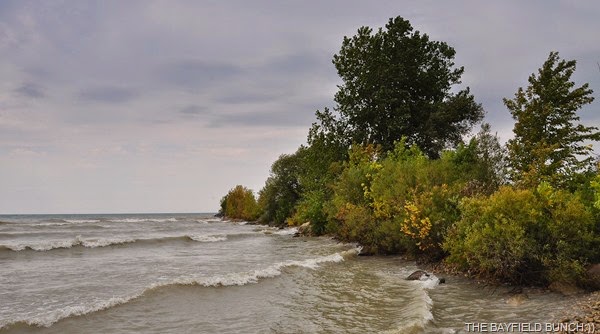 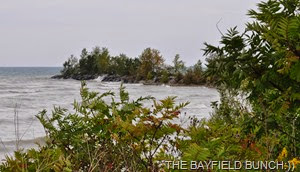 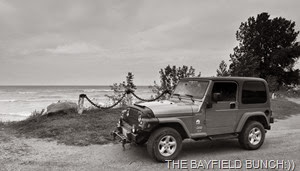 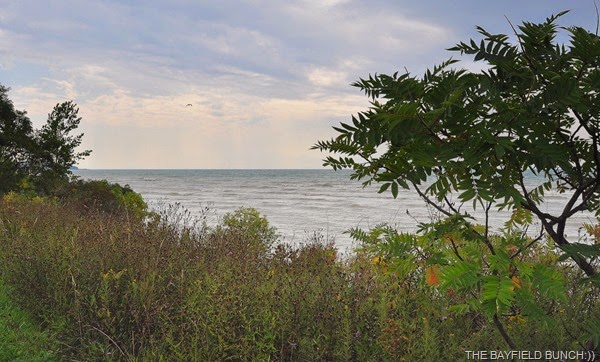 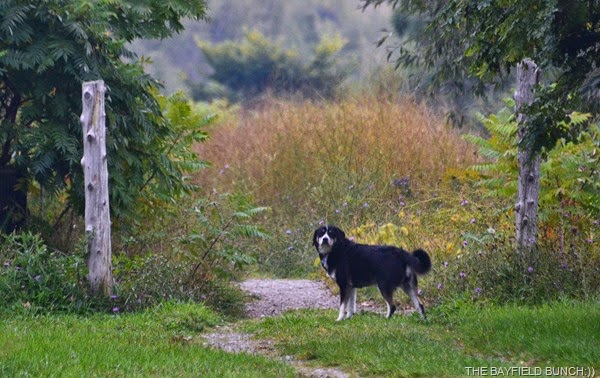 GROANER'S CORNER:((   When asked by a young patrol officer, "Do you know you were speeding?" this 83-year-old woman talked herself out of a ticket by stating, "Yes, but I had to get there before I forgot where I was going!"

A middle aged woman was driving through a school zone when a policeman pulled her over for speeding. As he was giving her the ticket, she said, "How come I always get a ticket and everyone else gets a warning? Is it my face?"  "No, ma'am," explained the officer, "it's your foot."

The police officer got out of his car as the kid who was stopped for speeding rolled down his window.  "I've been waiting for you all day," the officer wisecracked.  The kid replied, "Well I got here as fast as I could."  The officer, knowing he had been outwitted sent the kid on his way without a ticket.