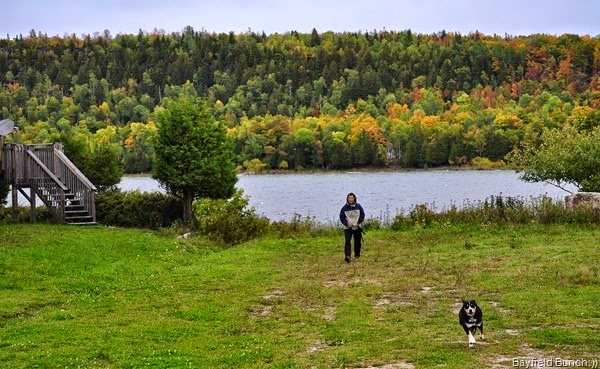 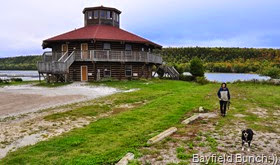 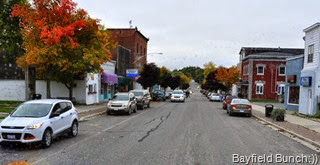 OUR BOONDOCKING OVERNIGHT SPOT WAS JUST SOUTH OF THE MARINA & ROLLING SOUTH OUT OF GORE BAY ONTARIO ABOUT 9:30 THIS MORNING

Rains finally ended sometime in the night but wind gusts were still buffeting our awning flaps when I took Pheebs out about 6 a.m.  Temperature was 45F.  Figure in the wind chill factor & we’re in the upper 30’s.   A check of our weather had shown a change again & now called for a sun & cloud day.  By 9 there was no indication of any breaks in the heavy cloud cover & the biting East wind had not let up.  Made the decision to pack up & head off on our continuing journey. 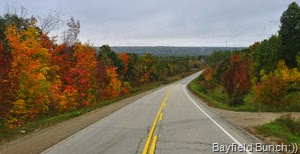 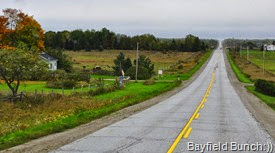 Justified our not toughing out the cold windy day by agreeing that at some point in the future when we are unable to head South in the winter anymore we would one day return to Manitoulin Island.  Leave Bayfield right after a Labor Day week-end in early September & do a warmer weather circle tour up through Collingwood, Parry Sound, Sudbury, Manitoulin Island, Sault Ste Marie, cross into the States at Mackinaw & slip down the Michigan Peninsula crossing back into Canada at Port Huron/Sarnia & back on to Bayfield.  Yep, we’re already looking forward to that trip one day:))

We rolled out of Gore Bay about 9:30.   Gore Bay looks like a nice scenic little town & seemed to have a nice feel to it despite the bad weather.  Saw a Valu-Mart, Home Hardware & a GM dealership all on the main street.  Again had the sun been out the scenery would have been prettier than it already was.  I had to pour a little contrast into today’s photos just to dance a little vibrant color out of the leaves.  Just out of Gore Bay a slight rainy mist followed us across the Island to Little Current where we crossed over to the mainland on a swing bridge at 10:30.  The road from Gore Bay to Little Current was much better than the road from South Baymouth to Gore Bay.  Much better. 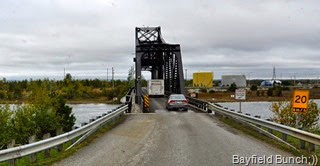 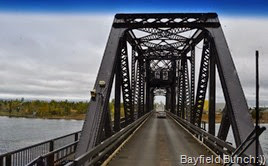 SWING BRIDGE TO THE MAINLAND AT LITTLE CURRENT

Again beautiful northern Ontario scenery all the way from Little Current to Espanola.  It was 11:15 when we rolled into a mall parking lot on Espanola’s southern edge for a leg stretch, egg salad sandwiches & a computer check.  Not raining but cloudy & cold & still very windy.  Decided to press on for Sault Ste Marie.  Just a couple miles north of Espanola we turned left & headed West. 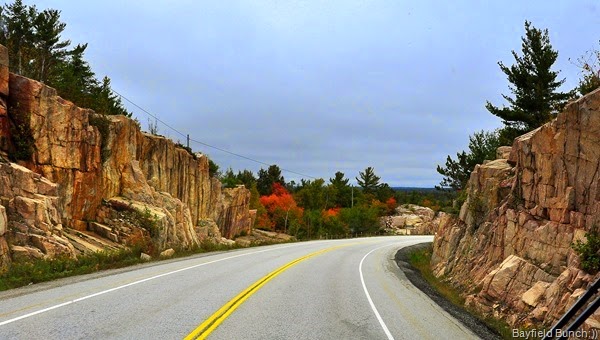 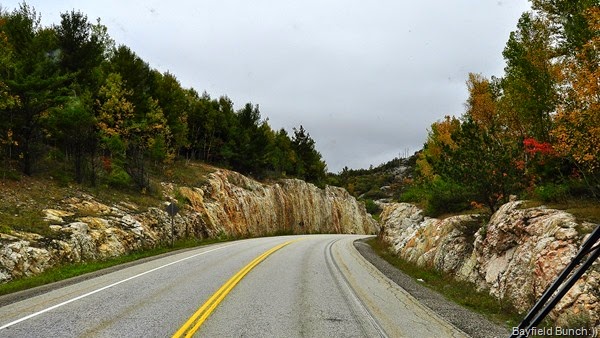 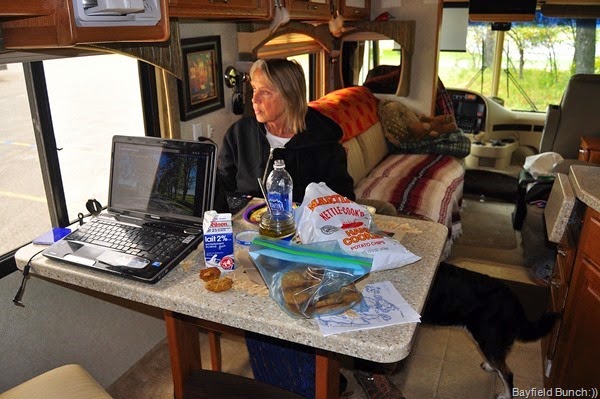 Been 40 years since I traveled this stretch of the Trans Canada highway & was expecting a lot of two lane traffic.  I needn’t have worried.  Traffic was surprising lite & I was really surprised at the lack of big trucks.  The highway is much improved since I last drove it & now has lots of passing lanes.  There were long stretches of highway today where no vehicles were visible either ahead or behind us.  My kinda traffic.  Nice Fall foliage all the way but without the sun……well, you know.

Rolled into the ‘Soo’ about 3 o’clock & proceeded to get ourselves a little turned around a couple times but we did manage to finally find Walmart which had a Home Depot beside it.  We knew from experience Home Depot would be quieter so that’s where we dropped anchor for the night.

WE WERE SO HOPING THAT PATCH OF BLUE ON THE HORIZON WAS HEADED OUR WAY BUT ALAS IT VEERED OFF SOMEWHERE & WE ARE STILL UNDER CLOUDY SKIES AT THE END OF THE DAY….BUT MUCH MILDER THAN GORE BAY…WE ARE AT 62F AT 6 P.M. 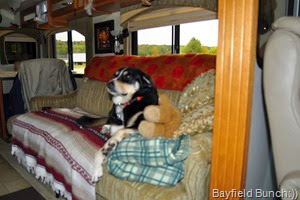 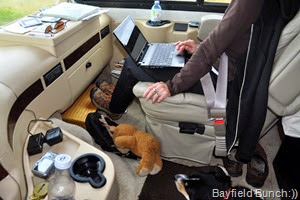 Been having a bit time with one of our rig’s two furnaces.  Bedroom & bathroom area furnace works perfect but the furnace heating the kitchen & living room area is giving us grief.  Monday it blew hot air but would keep shutting itself off after a minutes running.  Kelly tried all the settings but to no avail.  Today it is blowing only cold air.  We (whenever I say we I’m really meaning Kelly) have all the furnace manuals out & are trying to trouble shoot the problem.  If we can’t solve it maybe the manufacture’s of our coach can help us out when we arrive in Winkler Manitoba maybe next week sometime.  In the meantime it’s fur lined boots & toques in the living room & Bermuda shorts & Hawaiian music in the bedroom & bathroom areas.

OUR SAULT STE MARIE ROOST FOR THE NIGHT

And we were able to determine the Corner Gas set I want to see has not burned down.  It was another separate building in the town of Rouleau sometimes used in the series that burned.  Whewwwww, close call there……. 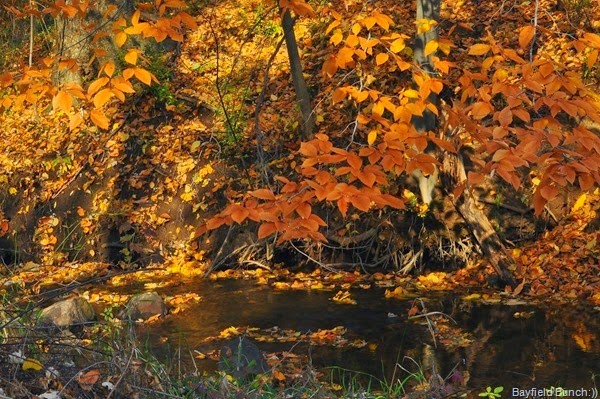 GROANER’S CORNER:(( Shortly after reporting to the 101st Airborne Division, we were ordered to fall out in our dress uniforms. Only problem was, I didn't know how to tie a necktie. So I asked the guy in the next bunk for help.
"Sure," he said. "Lie down."  Confused, I lay down on the bunk and he tied my tie. "Sorry, but this is the only way I know how," he said. "Comes from practicing on my father's clients."  "What does your father do?"  "He's a mortician."

Most of us consider ourselves broadminded enough to admit that there are two sides to every argument. First and foremost, there is our side, and then there is the side that no reasonably intelligent, informed, sane, and self-respecting person could possible hold.