ENERGIZED BY COOLER TEMPERATURES & WHERE IS THE FINAL RESTING PLACE OF THAT ARMY SHELL I DRAGGED HOME 50 YEARS AGO…………….

We woke up to dead calm air this morning.  Not a leaf was stirring not even a house.  Rains subsided in the night leaving us with soggy surroundings.  Our power flickered off & on twice during Friday's supper hour storm & we came away much luckier than inhabitants further inland where power outages were wider spread & lengthy.  Downed trees & an unconfirmed tornado in the Orillia area.  That storm front chased all our humidity right out of Dodge replacing it with refreshing cooler temperatures today.  Ahhhhhhhh:))  Weather stations said Friday was the 'hottest feeling' day of the year.  When they figured in the humidity factor with the temperature it felt like 42 Celsius.  In Fahrenheit terms that would add up to 114 degrees.  Hard to believe but that's what they said. 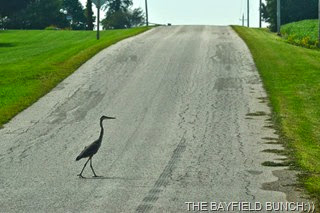 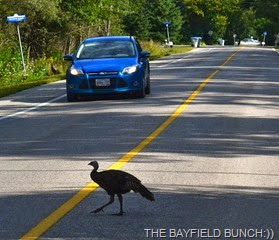 In Friday night's post I was in a hurry to get the storm pics into my post & published just in case we lost our power.  In one of the photos the storm clouds were over the Bayfield Village Inn but the Inn was hard to see.  Today I took a minute to work on that photo a bit & make the Village Inn more visible. 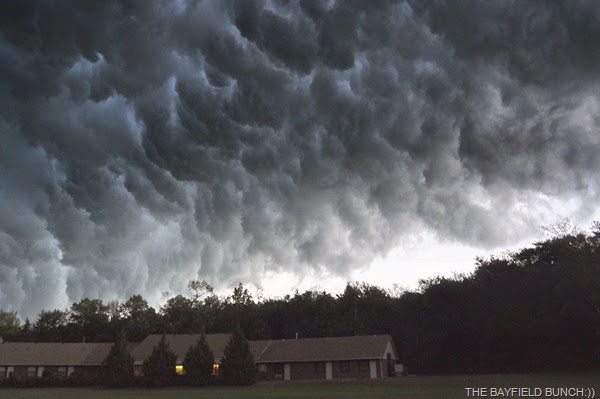 Energized by our mornings cooler air I didn't waste any time getting started on some outside projects first thing.  Five heaping wheelbarrow loads of Pine needles to pick up after DEER PARK Rob swept them all off our roof Friday afternoon.  Dumped them in a pile & will pick up with the utility trailer later.  Dug up & moved some Hostas, Hollyhocks & several clumps of tall yellow flowers.  Cleaned out the eaves troughs & just worked my down a list of yardy things to do.  I ran out of gas about noon & coasted for the rest of the day.  Some full-timers get rid of their houses for some of the same reasons I am thankful we have a house.  I know yard work isn't for everyone but luckily for me I enjoy it & it does give me a working outlet for my restlessness & the added exercise is always beneficial. 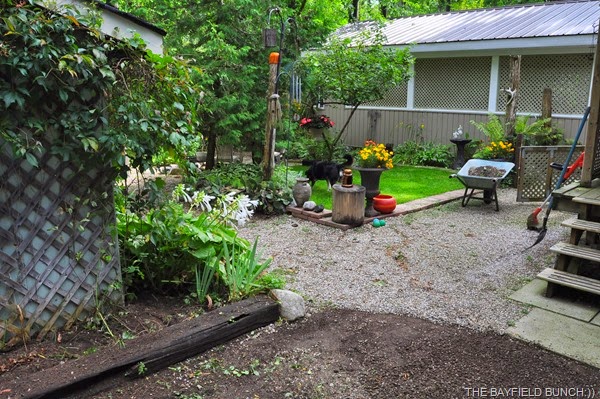 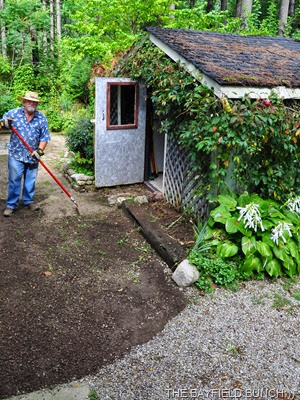 Amazingly enough tonight I have have remembered a couple reader questions.  John from RV LIFE ON WHEELS asked about that piece of artillery ordnance (Thursday's post) I brought back from CAMP IPPERWASH many years ago & put in my Mothers barn for 25 years.  In the mid 80's I drove that thing out of Tavistock one day & tossed it into a local creek.  Far as I know it's been buried in the mud there for the past 25 years or so. Tom from TOM_KATHY_RETIRED left a comment about that shell we found & said,  “In the USA blue means inert/practice when used on ordnance”.   I am inclined to agree with Tom & think he is right about it being a ‘inert practice round’.  That rocket head or whatever it was was definitely blue.  Robins Egg blue if I remember correctly.   May have been some small white lettering on it as well & after thinking about it today I do have another theory on how I got that thing back to Tavistock.  I bought my first Volkswagen Beetle in the Fall of 1963 & I did take it up to 'the Cottage’ a couple times in early 64.  Jim, John & either Gary or Craig will well remember the day we were all back in the army camp driving along in that Volkswagen Bug when the darn thing suddenly stopped running.  Took us about an hour to push that Beetle back to the beach.  Can't remember how we got it started but I'm guessing we were able to push it a bit faster on the hard packed sand (cars regularly drove on Ipperwash beach in those days) & I jumped in with the ignition on, pulled it into second gear & popped the clutch.  That was & probably still is a common way of starting a standard transmission vehicle with a dead battery.  Anyway I have a feeling the day we found that blue rocket head or whatever it was I may very well have had my Volkswagen there & put it in my car.  Not likely I/we could have snuck that thing past Gary.  Memories do get a little mushy after 50 years or so.........Second question from Kristine Barr asked, What is a solar streamer? I had used that term to describe the sun's rays shining through some holes in the clouds.  Solar pertaining to sunlight streaming through the clouds if you will. 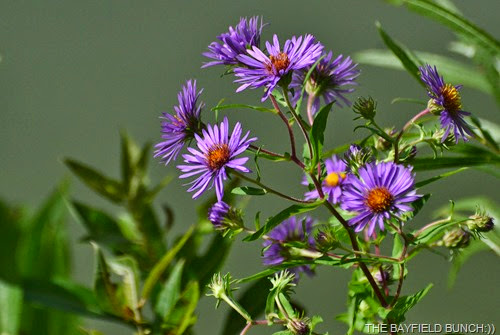 After writing the above paragraph something occurred to me I had not thought of before & the creek I tossed that blue rocket head into actually ties in with my 'ME & QUEEN ELIZABETH post I originally wrote back in 2008. The last paragraph in that post tells of the last time I saw Queen Elizabeth & the route her entourage took from Stratford to Woodstock Ontario one warm summer day. (I have included that paragraph in tonight’s post underneath Groaner’s Corner)  Now it's a good thing England's Secret Intelligence Service M16 wasn't on to me.  Here I was on that nice summer day in 1998 parked just off highway 59 sitting on my motorcycle waiting for the Queen Of England to go by.  It was just about a dozen years before that I had tossed that army shell off a bridge just southwest of Tavistock on………. highway 59.  The very highway used by the Queens entourage & security team to drive her from Stratford to Woodstock.  When the Queen of England's car passed over that bridge that day in 98 she was probably only 20 feet or so from where I had chucked that ordnance.  From the time she crossed that bridge & the speed her security convoy was traveling she would have passed me & my motorcycle location about 2 minutes later.  Hmmmmm, hope the British Tabloids don't get a hold of this because they would for sure tie this all together as some sort of Canadian bomb plot on the Queen of England.   I can just see it now....BOMBER ON MOTORCYCLE WAITS FOR QUEENS CAR TO CROSS BRIDGE BEFORE DETONATING PREVIOUSLY PLACED BOMB!! (a dozen years before)  Well, I write this all in jest of course but you do know what these tabloid magazines are like these days.  Oh, & which side of the bridge do you suppose the bomber placed the said device??..............Hmmmmm, I have it on good authority it was the East side of the bridge just about right in the middle of the creek:)) 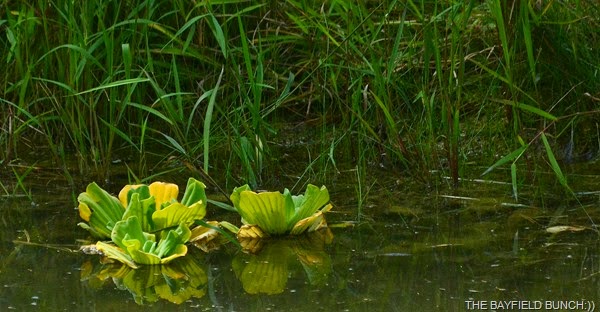 On CBC radio a few days ago Kelly heard an interesting interview.  That interview of a deceased lady’s husband & son led Kelly to look up & read this lady’s blog & last post dated August 14, 2014.  It’s a subject not often talked about but I think it’s a subject that should be talked about & discussed.  And especially now in this day & age.  You may find this ladies blog & final posting very interesting.  It is called GOODBYE & GOOD LUCK....DEAD AT NOON by Gillian Bennett. 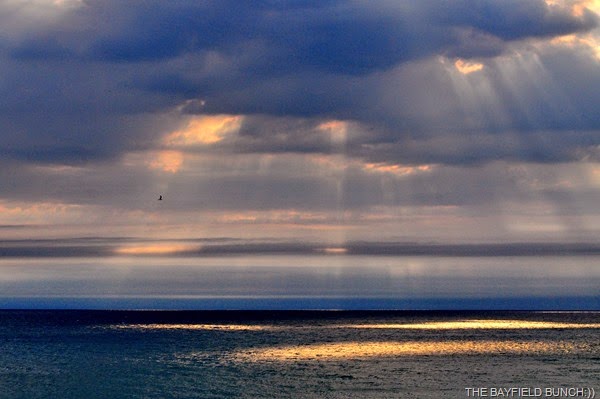 GROANER'S CORNER:((  Veteran Pillsbury spokesman, Pop N. Fresh, died yesterday of a severe yeast infection. He was 71. Known to friends as "Brown-n-Serve," Fresh was an avid gardener and tennis player.  Fresh was buried in one of the largest funeral ceremonies in recent years. Dozens of celebrities turned out including Mrs. Butterworth, the California Raisins, Hungry Jack, Aunt Jemima, Betty Crocker, the Hostess Twinkies, and Skippy.  The graveside was piled high with flours as longtime friend, Aunt Jemima, delivered the eulogy, describing Fresh as a man who "never knew how much he was kneaded."  Fresh rose quickly in show business, but his later life was filled with many turnovers. He was not considered a very smart cookie, wasting much of his dough on half-baked schemes -- conned by those who buttered him up.  Still, even as a crusty old man, he was a roll model for millions. He enjoyed being prodded by his many friends who invariably poked fun at him.  Fresh is survived by his second wife. They have two children and another bun in the oven.  The funeral was held at 3:50 for about 20 minutes.

Oh yes before I forget…………….. about me & Queen Elizabeth & our second meeting. I think it might have been in the summer of 1998. The Queen was in Stratford again & I heard she would be heading off to Woodstock, Ontario in early afternoon. Only one highway heading from Stratford to Woodstock so I knew her route.  Figured I may never see her again so I hopped on my motorcycle & headed over to a spot out in the country along highway 59 just a few miles north of Hickson Ontario. Nice open spot & no throngs of people this time. Finally, the normal traffic going by ended. No cars at all for awhile. Waited & waited & then one car went by moving very fast.  A few minutes another one followed & a minute later another car. This went on for about 5 minutes. Had I missed her?? Then I saw the convoy of cars coming fast. First one, two or three & then there she was & she was sitting by the back window on my side of the road. Light blue outfit with a matching powder blue hat. I was standing beside my motorcycle as I waved. No mistaking it this time, she looked right at me, but alas, there was no recognition in her eyes from 45 years before. Whoooooooosh, the car was by in seconds & she was gone..................... And that was my little story of, Me & Queen Elizabeth:))