AND HERE’S A BIT OF DISCONCERTING NEWS FOR BOONDOCKERS REGARDING OUR BELOVED FREE BLM LANDS……….:(( 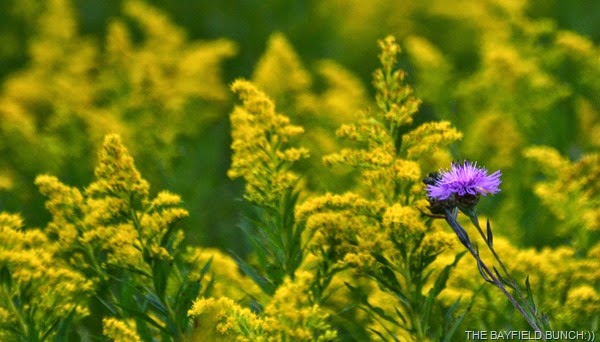 I don't know where my Monday morning energy went but by the time I woke up Tuesday morning it had definitely got up & went without me.  Walked around outside for a bit waiting for an inspiration.  None came.  Temperatures had come up overnight & it was muggy.  Thought of going back to bed but haven't done that since my teen-age years.  No point in starting that up again.  Didn't like doing that then & would dislike doing that even more now so no option there.  Kelly headed off to Goderich for some blood tests so Pheebs & I headed over to Clinton to pick up a coffee & carrot muffin on our way to the HULLETT MARSH. 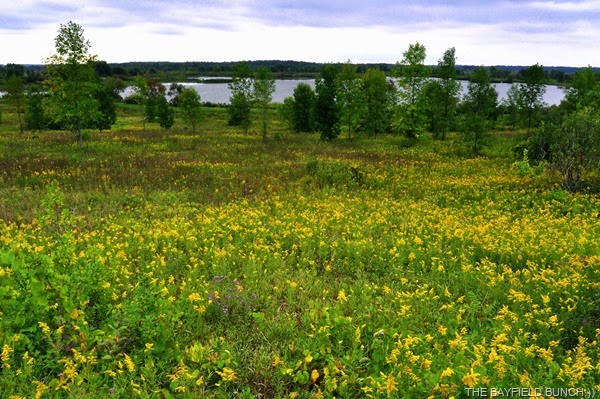 WE ARE SO FORTUNATE TO HAVE THESE WETLANDS OF THE HULLETT MARSH SO CLOSE TO US
My mood seemed to match the cloudy overcast skies.  Luckily we had a cooling breeze or I wouldn't even have considered getting out of the Jeep.  Had noticed on the Hullett-Marsh website a few weeks they had opened up a new trail this summer so we stopped to check it out.  Called the 'Orange Trail' it was actually an old trail I remembered from about 25 years ago.  It has been refurbished, the areas trees have grown & I remembered driving a motorcycle in there one summer’s day parking on a high point of ground & just sitting there in the grass for a long time gazing out across the marshlands. 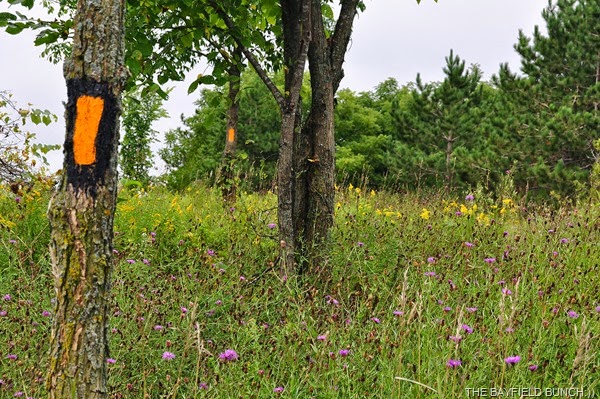 EASY TO SEE WHY THEY CALL IT THE ORANGE TRAIL:))

Thanks to a thick overnight cloud cover the trails long grass had been sheltered from a soaking wet heavy dew.  I think purple has to be one of my favorite colors because it always takes me back to my early childhood school days.  Walking along this morning surrounded by Purple Asters, Chicory, Canada Thistle & Goldenrod it was the multitude of unseen Crickets that pulled me out of the doldrums.  Blue Jays in the air & a host of busy bees buzzing about in fields of waving Goldenrod lifted my mood putting me back on a sunshine footing.  I like pausing by clumps of Asters & remembering those old school days, those old golden rule days.  I can still remember many of the faces & names of my classmates.  My favorite day was always in June when our teacher would take the whole class on a forest walk near the school.  Those days were my favs…………………….. 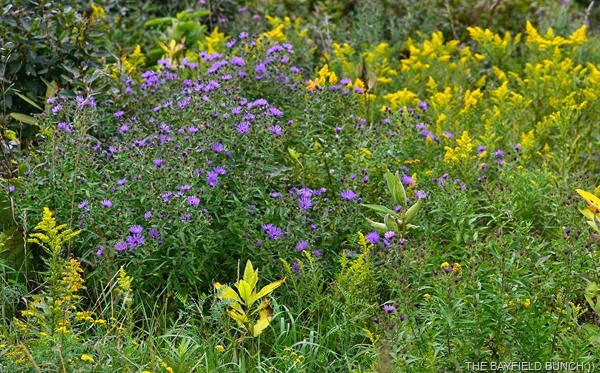 By the time Pheebs & I traveled ourselves back home the morning's cloud cover began breaking up sporadically bathing us in patterns of uplifting sun splashes.  Sunshine is one mighty magic elixir for many of us. 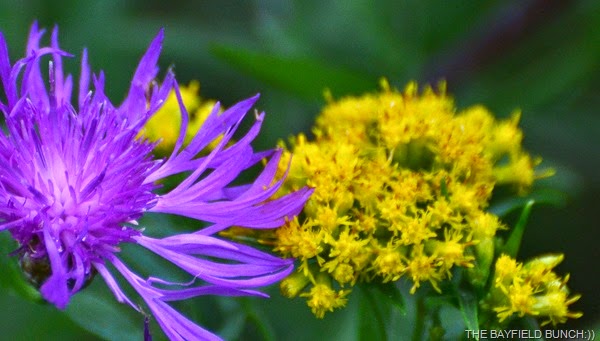 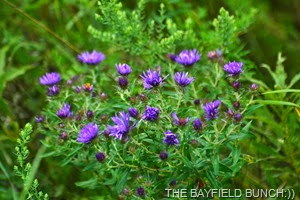 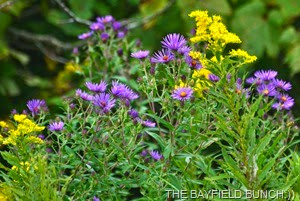 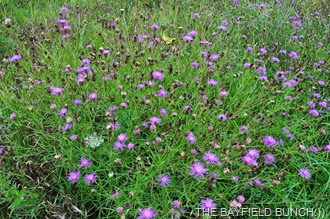 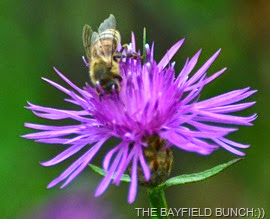 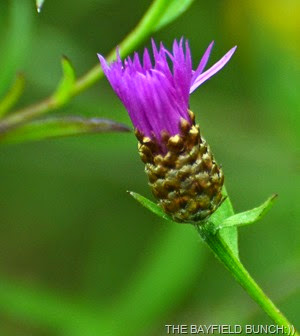 As some Escapees are aware, a bill has been introduced in the United States Congress, HB 5204, entitled The Federal Lands Recreation Enhancement Modernization Act of 2014, which will allow fees to be collected for most of the "public land" that is controlled by the Forest Service and the Bureau of Land Management. If the bill passes, it would allow the Federal Government to charge fees for any activity on land that we presently have access to for free. Fees could include a permit fee, day use fee, or a special use fee. There is the possibility that the bill could be attached to an appropriation bill, which would allow the bill to pass without public comment or debate.
It is time now to get involved and contact your congressman and senators where you have your domicile and let them know that HB 5204 should be defeated. In the past, public lands have been turned over to concessionaires that allowed them to charge fees or to refuse to give discounts for entering the federal lands. This bill may not pass, but don't take a chance and let the other members contact their congressman or senators. It only takes a few minutes to let the representatives that we elected know how we feel.
To find your congressman, you can go to http://www.house.gov, and for senators, you can go to http://www.senate.gov.
If you would like to review the bill yourself:
https://beta.congress.gov/bill/113th-congress/house-bill/5204/text 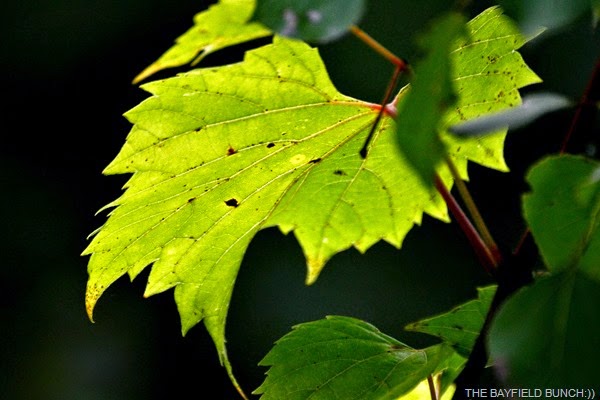 GROANER'S CORNER:(( A man walks into a shoe store and tries on a pair of shoes.  "How do they feel?" asks the sales clerk.  "Well ...they feel a bit tight," replies the man.  The assistant promptly bends down and has a look at the shoes and the mans feet. "Try pulling the tongue out," offers the clerk.  Theyth sthill feelth a bith tighth," he replied.

Another guy walks into a shoe store and asks for a pair of shoes, size 8.  The obviously well trained salesman says, "But sir, you take an 11 or eleven-and-a-half."  "Just bring me a size eight!" the man replies.  The sales guy brings them and the man stuffs his feet into them and stands up in obvious pain. He turns to the salesman and says, "I've lost my house because of foreclosure, I live with my mother-in-law, my daughter ran off with my best friend, and my business has filed Chapter 7. The only pleasure I have left in life is to come home at night and take my shoes off."