WE KNEW THEY HAD AN ALPHA MOTORHOME WITH A NEW WHITE JEEP & THAT’S HOW WE FOUND THEM:))

We were in the Sunfire & on the road to London this morning shortly after 9.  Nice country drive for two thirds of the way then you get to the city.  We found the Citizenship & Immigration place in the south end of the city with no problem.  A few people milling about outside waiting for it to open at 10:30.  Seeing how this was a Government organization I figured it would be fraught with all the red tape & bureaucracy that goes with that sort of thing.  Kelly headed inside while I sat back, opened my Kindle & prepared to wait for at least an hour if not more.  Five minutes later Kelly opened the side passenger door.  I figured she had forgot something.  Nope, she was all done.  A couple simple questions & the fellow behind what was likely bullet proof class slipped Kelly her new card which will be good for 5 years.  And that was it, not one question about the mountain of paperwork Kelly had been required to bring.  They never even looked or double checked a single thing.  Oh well it was a bonus for our side & we quickly roared out of the parking lot just in case anyone had any second thoughts about asking anything more.  Who ever heard of dealing with anything Governmental in a mere 5 minutes anyway………………………. 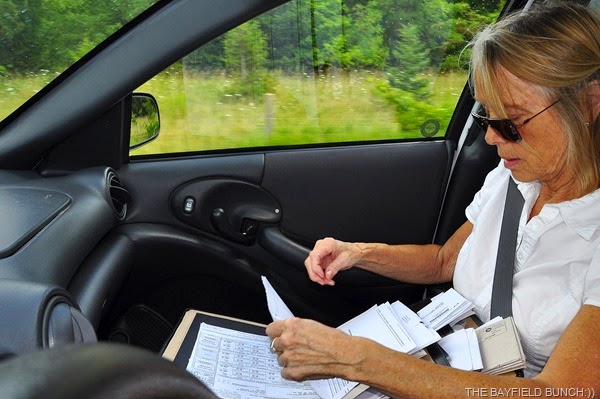 LAST MINUTE DOUBLE & TRIPLE CHECKING OF ALL THE DOCUMENTS NOBODY LOOKED AT ANYWAY
My thoughts of immediately escaping the bonds of London's grasp were short lived however.  Kelly had spotted a new shopping mall not far from the Immigration office so in we went.  She was looking for curtains & there just happened to be a Marshalls plus a Bath & Beyond there.  And some other stores of course.  I opened my Kindle for what I thought might be a twenty minute wait while Kelly headed into Shopsville.  I ended up sitting in that parking lot for over an hour before I finally extricated myself from the car & took my cramped legs for a much needed walk.  Kelly finally found her way back to the car with curtains in hand & somehow accidentally set off the car alarm.  I had locked the care & I guess she had tried to open the door.  Luckily I was just coming across from the far end of the parking lot & managed to shut the alarm off with the control key fob.  From there we were off with a stop in London's north end at a Union Burger.  First time we had been to one of those.  Reminded us of 5 Guys with good burgs & home cut fries.  It was somewhere around 2 when we got home to a very happy & excited little doggy. 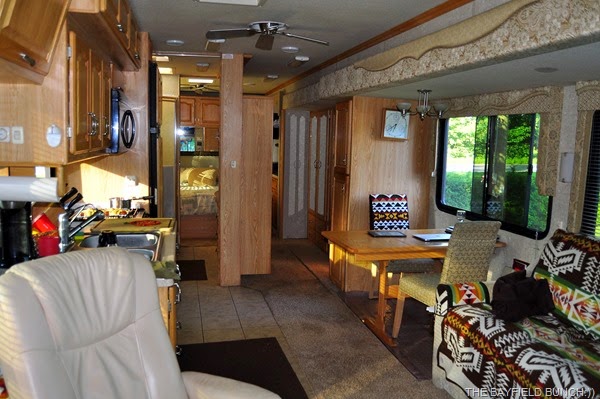 ‘WOW’ DID WE EVER LIKE THE SIZE & ROOMY LAYOUT OF THIS ALFA MOTORHOME.  ALL THE WINDOWS ARE HUGE GIVING THE RIG A FEELING OF CHEERY OPENNESS  WITH ALL IT’S LIGHT & BREEZY COLORS…NICE, NICE, NICE
For the past several days we had been in touch via email with a long time fellow Blogger & her husband.  We have known these fine folks through our blogs for quite a few years now.  Almost since the time I started blogging I think.  Having finally sold their house awhile back they have hit the road full time in their Alfa Motorhome.  Starting out in California making their way through many States they emailed us a few days ago from Detroit In Michigan.  Their next major destination was Niagara Falls but decided to make a swing up around through our neck of the woods to say Hello.  Guessed who it is yet?  They found a Passport America park about a half hour drive east of Bayfield & rolled in Sunday.  Had we not had to go to London today we would have slipped over & done a hike with them today.  However, they are coming to our place Tuesday for lunch but in the meantime we drove over to see them tonight at the FAMILY PARADISE campground just North-East of Seaforth Ontario.  Luckily we spotted their big white Alpha Motorhome from the road.  How great it was to finally meet Merikay & her husband Craig from MERIKAY'S DREAM.  Liked these folks & their down home nature right off.  We arrived slightly after 6 p.m. & that was just in time to ruin their supper.  Oh Dear.  No matter they said as we all launched into RV overdrive talk.  I think all RV’ers do that when they meet.  It just goes non stop & I don’t think any of us took a breath for at least nearly an hour when Kelly & I headed on back home.  Merikay’s one of those Gals with a twinkle in her eye & a jolly nature & Craig’s one of those quick witted guys you would like to have as a best friend.  We’ll all be getting together for round 2 late Tuesday morning:)) 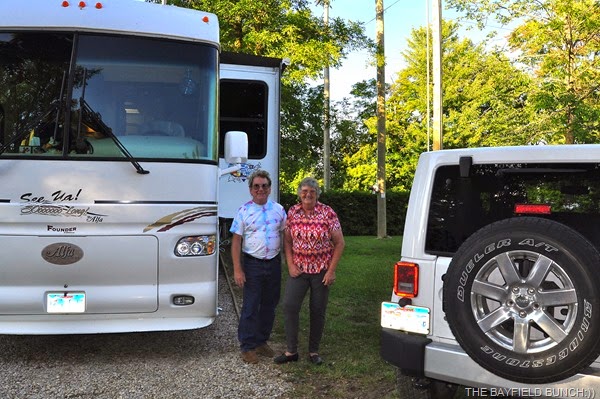 THE ALFA, CRAIG, MERIKAY & THEIR JEEP
GROANER'S CORNER:((   A priest at a parochial school, wanting to point out the proper behaviour for church, was trying to elicit from the youngsters rules that their parents might give before taking them to a nice restaurant.  "Don't play with your food," one second-grader cited.  "Don't be loud," said another, and so on.  "And what rule do your parents give you before you go out to eat?" the priest inquired of one little boy.  Without batting an eye, the child replied, "Order something cheap."
---
A friend of ours from another city was on her way to our house when suddenly she realized she had made a wrong turn. She stopped and asked a lady for directions.  "Go back down this road through a couple of traffic lights," she was instructed, "then stop and ask someone else."
Posted by Al Bossence at 8/18/2014