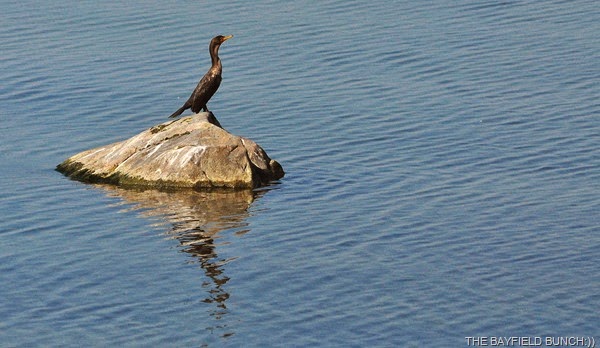 Was feeling a need to take the 'big wheels' for a drive this morning so loaded up the gang & we headed off to Goderich.  Topped off our propane tank & stopped in across the road at a windshield repair place to get an opinion on a small stone chip in the passenger side.  Fellow says the chip has already been repaired once & not to worry about it.  The windshield place just happened to be right next door to McDonalds so grabbed a muffin & coffee to go while there. 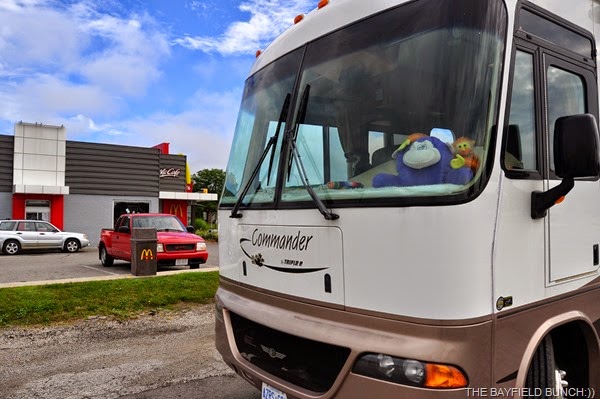 CONVENIENTLY PARKED NEXT TO A McDONALDS 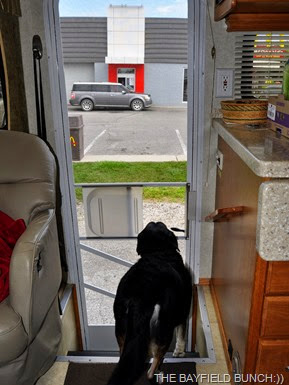 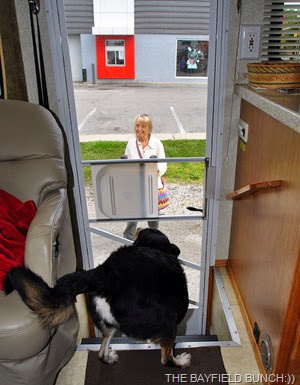 WAITING, WAITING, WAITING & THEN A PHOTO OF 2 VERY McHAPPY CHARACTERS
Want to see a couple really cute pictures of Hailey??  Be sure to drop by & see what Ivan is up to over at ROADTRIP 2014.  He's managed to win himself a couple local photo contests & he's still at his fire base camp taking care of business. Ivan’s looking forward to heading out in a month or two for the great South-West. 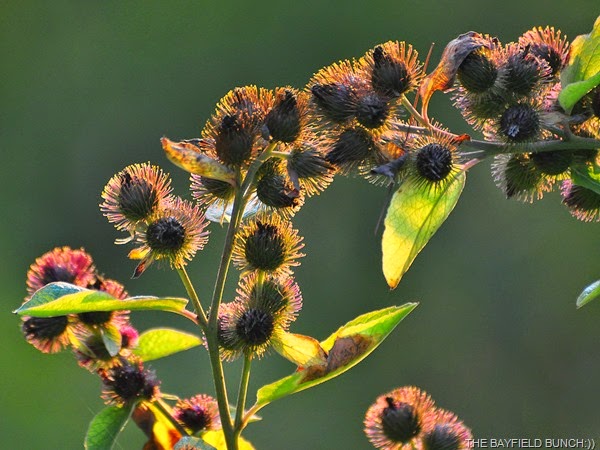 I walk outside & go over to the Motorhome.  Open up a couple bins with the intentions of loading up some stuff.  It gives me a psychological boost when I do that but there's a problem.  I walk through the carport, sheds, & house trying to think of things to load up.  Seems I mostly end up going back to the rig & closing the bin doors again having not come up with anything to load.  Guess I will have to be patient & wait until the day before we leave to get all that done in one big excited & frantic blast. 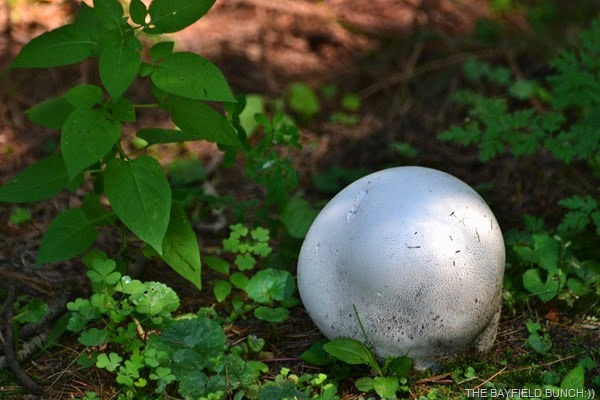 NOTICED ANOTHER EDIBLE PUFFBALL GROWING IN THE FOREST THIS AFTERNOON
Kelly questioned our departure date a couple days ago expressing an interest in the possibility of Utah & Arizona being to hot if we get there too early.  I was quickly on the computer checking out average temperatures for our areas of travel in both States for October.  Looks Okay but hard to tell.  Temperatures in the South-West depend more on altitude than area.  If it's too hot one just looks for a higher altitude near by & that usually solves the problem.  And higher altitudes are readily available in the South-West:)) 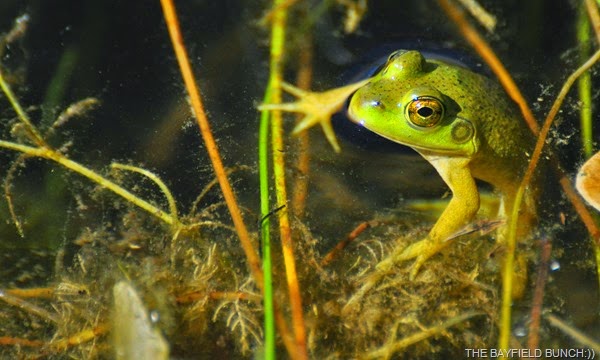 It seems I got an Alpha mixed up with an Alfa & it is important to keep one's Alfa/Alphas straight.  I did miss-spell the name of MERIKAY & Craig's Motorhome a few posts ago.  I'm a bit surprised nobody else noticed this but I saw in a comment from Craig that indeed their rig is an Alfa & not an Alpha.  Craig went on to say,  "according to people who have been involved with them since the start, Alfa stood for "A Loving Family Affair".  Now, there Alfa Motorhome does have a TPO roof from a company named Alpha. (don’t ask me what TPO stands for)  Craig said,  "Alfa Leisure went out of business in 2008, at the height (depth) of the recession. Their assets, parts, and many of their people survive as the service company Alfateers in Fontana, CA”.  I have since gone back & made the corrections to my posts.

Ed from THE PEREGRINATING GRAYBEARD had mentioned a few posts back that when he looked at my posts the smaller photos were not always side by side as I had configured them to be.  Thursday I headed into the scary area of my blog's template & found the section where I could either stretch or de-stretch the widths of my 2 columns.  I lessened the width of my right hand column & that seems to have fixed the problem.  Ed left a comment this morning saying the photos are now side by side as I had hoped they would be.  Thanks for pointing that out Ed.  Wondering who Ed is??  Check out the day we met Ed back in late December of 2010.  THE DAY WE MET ED FREY:)) 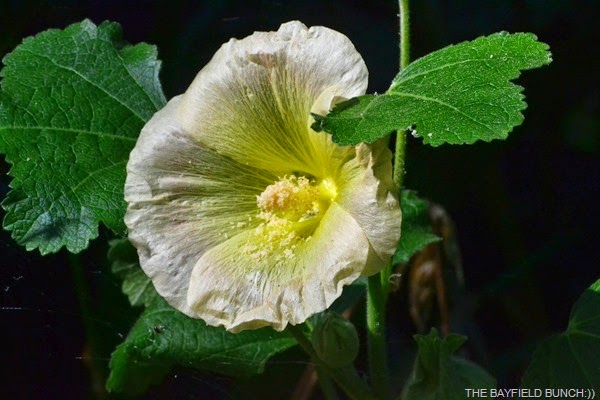 Have you ever spent sleepless nights lying awake wondering what a Haboob is.  I know I haven't but I am only one out of countless millions.  Cheryl Ann over at DEEP CANYON knows what a Haboob is & she certainly doesn't go outside when a Haboob is overhead!! 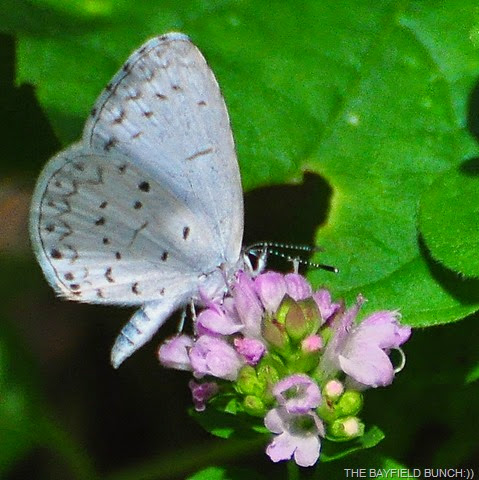 Cut our grass today.  First time we've had grass to cut in years.  That sod I put down last week is really growing.  I had hoped it was that 'self cutting' kind of grass but alas it is not.  Tried our green push mower on it.  Not so good so finished cutting it with the weed  whacker.  That was more gooder but maybe the most goodest would have been to not have any grass to cut at all:))  Oh well at least I don't have to spend endless hours riding around on a lawnmower although having never done that, who knows I might like it:)) 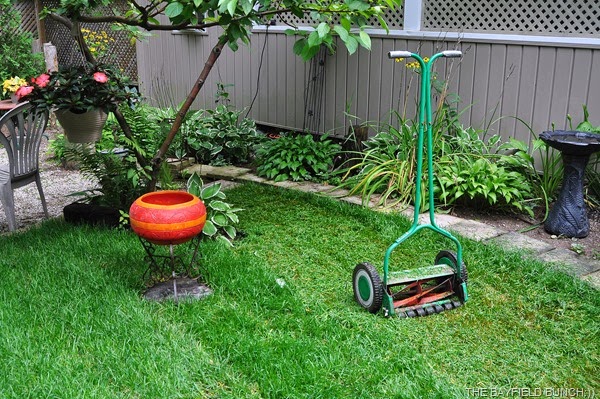 Oh yes, about being out-muffined.  After picking up a muffin & coffee I decided to throw a little extra gas in the rig.  Pulled up to the Solo gas pump eating my McDonald’s carrot muffin.  Exited the rig with muffin in hand.  New girl at the pump was having a problem with the nozzle so I offered to do it for her.  Problem was I had two thirds of a carrot muffin in my hand.  Walked over to my drivers door, opened it & set my muffin inside with the words to Kelly, “ don’t let Pheebs over here to grab my muffin”.  I distinctly heard an affirmative OK from the security department in the passenger seat.  Finished the fuelling & a few minutes later I am back in the drivers seat & reach down for my muffin.  It’s gone!!!!  Nothing, not even a smattering of crumbs left.  Due to a lapse in security I was definitely out-muffined by a 4 legged furry Muffinator:(( 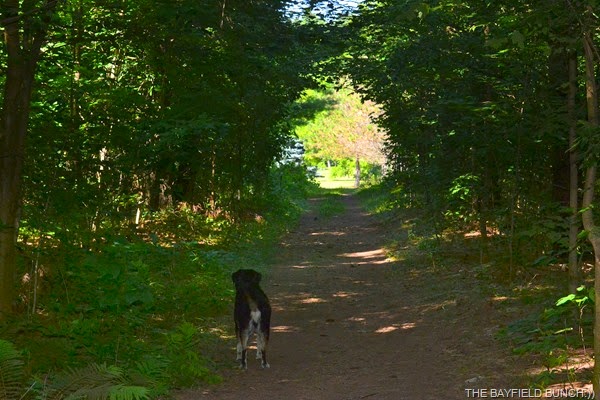 AND SPEAKING OF THE LITTLE MUFFINATOR, HERE SHE IS NOW:)) 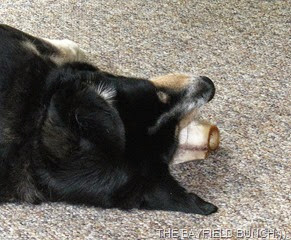 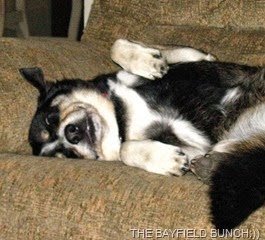 SHE JUST LOVES HER COUCH 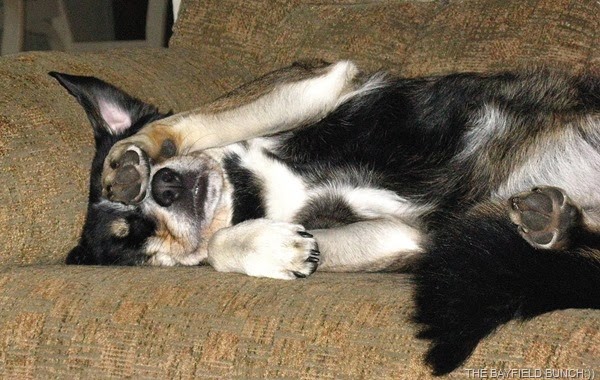 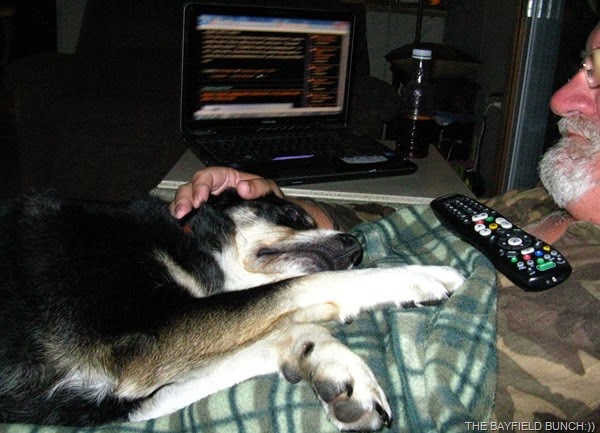 AND SHE ALWAYS LOVES SNOOZING ON DAD’S LAP:))

GROANER'S CORNER:(( A young man was walking through a supermarket to pick up a few things when he noticed an old lady following him around. Thinking nothing of it, he ignored her and continued on. Finally he went to the checkout line, but she got in front of him.  "Pardon me," she said, "I'm sorry if my staring at you has made you feel uncomfortable. It's just that you look just like my son, who just died recently."  "I'm very sorry," replied the young man, "is there anything I can do for you?"  "Yes," she said, "As I'm leaving, can you say 'Good bye, Mother'? It would make me feel so much better."  "Sure," answered the young man.  s the old woman was leaving, he called out, "Goodbye, Mother!"  As he stepped up to the checkout counter, he saw that his total was $127.50.  "How can that be?" He asked, "I only purchased a few things!"  "Your mother said that you would pay for her," said the clerk.

As I was driving home from work one day, I stopped to watch a local Little League baseball game that was being played in a park near my home. As I sat down behind the bench on the first-base line, I asked one of the boys what the score was. "We're behind 14 to nothing," he answered with a smile.  "Really," I said. "I have to say you don't look very discouraged."  "Discouraged?" the boy asked with a puzzled look on his face. "Why should we be discouraged? We haven't even been up to bat yet."