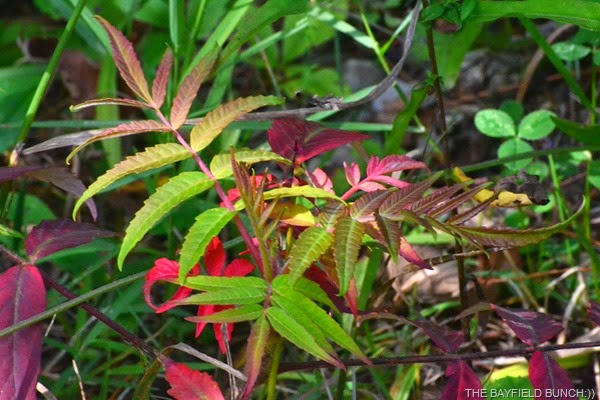 A FEW EARLY COLORS & HUES OF ANOTHER AUTUMN SEASON JUST AROUND THE CORNER:))

Despite a rather cold damp overcast & gloomy weather start to the day we did have a ray of sunshine roll into our driveway just after 10 a.m. this morning.  Their names were George & Suzie better known through George's blog, OUR AWESOME TRAVELS.  I had decided about a week ago to put a travel map on our blog.  In short order it turned out be easier said than done.  Kelly tried her hand at it as well but found it frustrating.  Had noticed George had a Google map on his site so Kelly emailed him with a few questions.  George & Suzie were camped about an hour south of Bayfield so George offered to come up & help us with the map thingy sometime.  Well sometime was this morning.  We had actually met George & Suzie on one other occasion back in January of 2012 when we were boondocking just outside of Bouse Arizona.  They drove on up from Quartzsite one day to say Hello.  Link for that day is here at OUR LAST DAY ON PLOMOSA ROAD 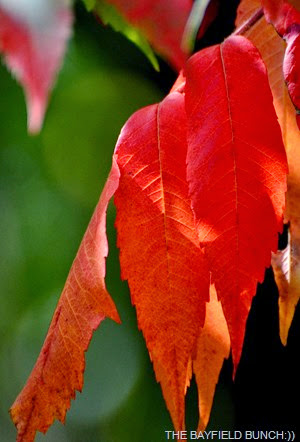 We had us a little tour of the Big EEE & compared some of the similarities between their Saturn car & our Sunfire.  Because of the colder weather we didn't spend much time outside & were soon into our warmer sunroom where George & Kelly got to work on installing a Google map on our site.  I watched & could see it was a bit more involved than what first thought.  Took a little while to get things figured out but I do think we have a bit of a handle on it now.  It's just going to take some time familiarizing ourselves with how it all works.  Again repetition is the key factor here & for sure the more I work with this map the easier it will become.  Repetition is one of the key factors in keeping my blog going.  If I were to step away from it for any length of time I know my aging mind would probably find it difficult to stay in touch with all the steps in setting up & maintaining a Blog site.  It’s just one of those things I have become reluctantly aware of. 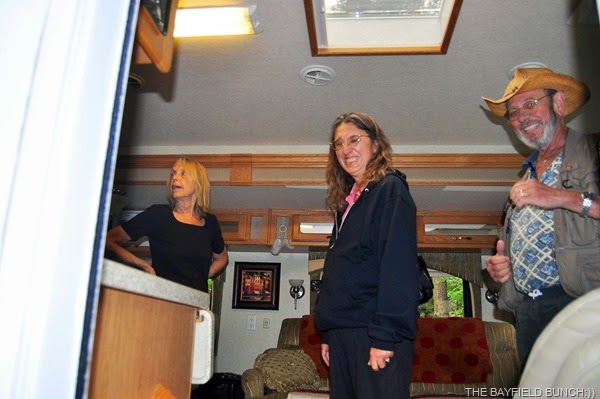 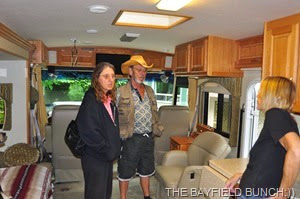 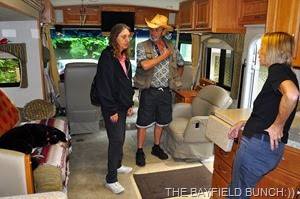 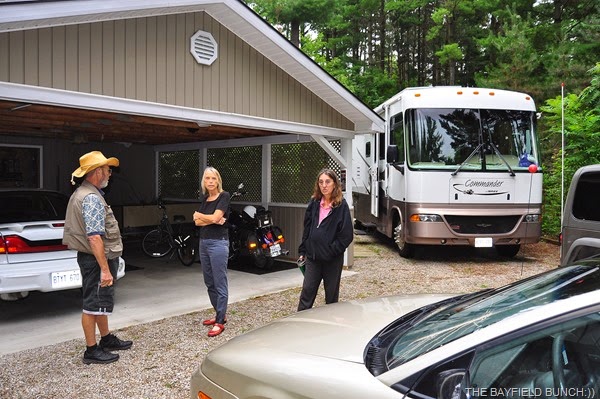 Kelly had picked up some Honey Garlic sausage, a blueberry pie & some ice cream at our favorite Mennonite market location just south of Bayfield so once the Google map thingy was installed we all headed for the kitchen.  Kelly had a couple questions for George about our Webber Q because George has the same BBQ.  It was nice sitting around our kitchen table talking with Suzie & George today & I'm happy they decided to drop in & see us.  George told us how he got into the habit of including a daily photo of their lunch or dinner.  He said when he first started his blog years ago he didn't have anything to really write about so just included a few foody pics.  A short while later when he began finding things to write about he didn't include the food photos.  Of course comments came in right away asking where his foody photos were so without further adieu he quickly reinstated the daily ritual & has been well known for his lean mean cuisine photos ever since:)) 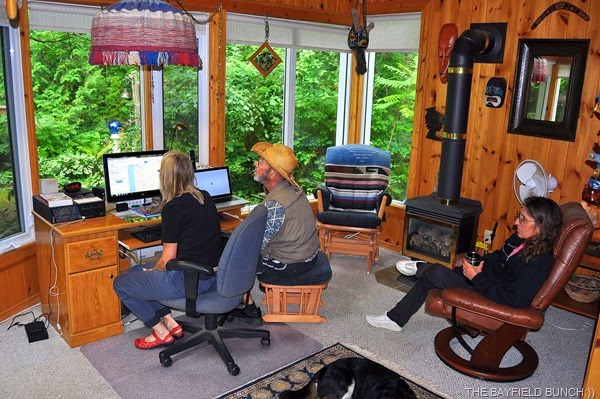 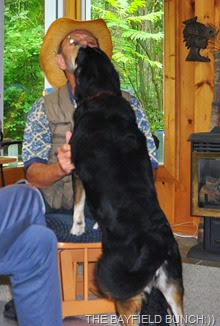 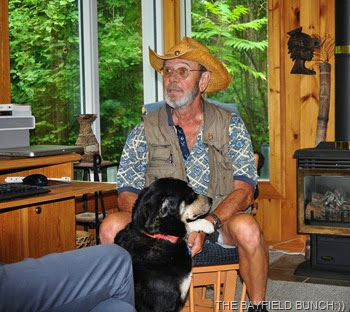 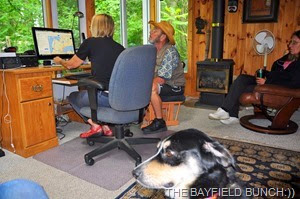 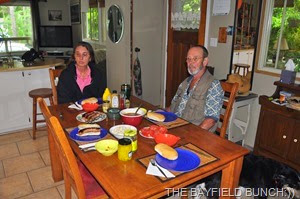 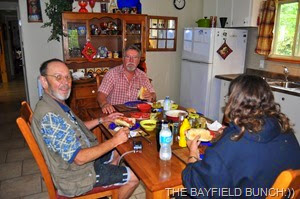 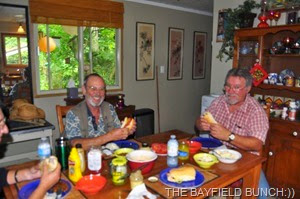 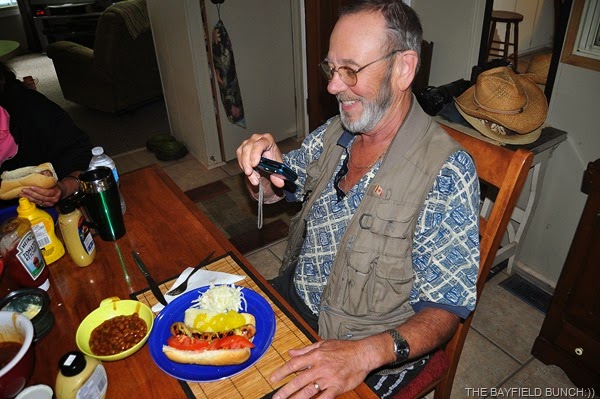 AND THIS IS HOW GEORGE DOES THOSE FOOD PHOTOS:))
Said goodbye to ‘Our Awesome Travel' folks about 2:30.  They spend their winters in the South-West as well so we'll probably see George & Suzie again somewhere in our wanderings this winter.  Possibly at our home in Congress if they get up & around that way.  Nice down to earth people & we so much enjoyed getting to know them better today. 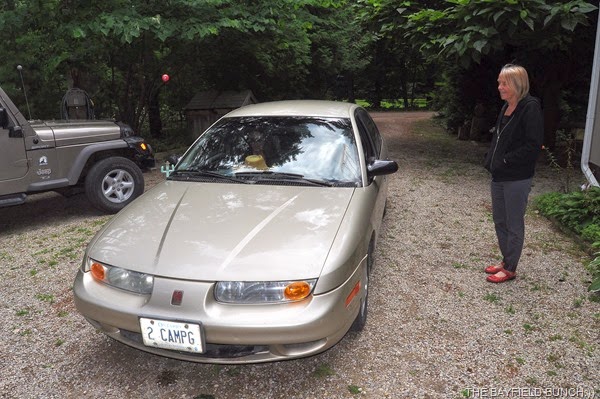 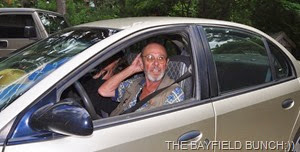 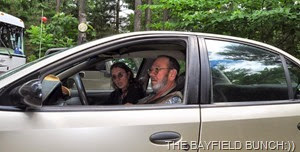 SEE YA SOMETIME IN THE WILD & WOOLLY SOUTH-WEST THIS WINTER
Skies cleared about mid afternoon & how nice to see old Sol back on the job again.  Temps only made it into the low 60's today but what a welcome relief from last week's 80+ humidity.  The seasons are definitely beginning their change & I'm looking forward to hearing my first Cricket.  For me that marks the beginning of my very much most favorite time of year & makes it all official.

Well, with a little bit of luck our 2014/15 travels should begin in another 6 weeks or so.  Plans are still to leave on Saturday September 27th which is about 3 weeks before we normally head out.  Our route plan is still on for Utah & Arizona via South Dakota.  Looking forward to seeing Autumn in the West this year.  I am soooooooooo much looking forward to once again hitting the road & making tracks for the great American South-West.  Oh how I strain my eyes every year for the very first glimpse of a distant mountain top emerging out of the haze shrouded horizon.  Eyes to the ground for that very first cactus.  So much looking forward to that big beautiful & unobstructed night sky & all my favorite constellations.  Diamond studded stars shimmering from horizon to horizon.  Moonbeams playing out over the stillness of a surrounding desert landscape with the 'Sons Of The Pioneers' in the background singing 'Along the Santa Fe Trail'.  South-Western Ontario has always been my home but it is in the American South-West where I feel I have always belonged.  My stress levels drop, my often times depressive nature & mood swings calm right down & a feeling of kinship with the old West takes hold of me.  I feel I am in a land where I am meant to be.  I am in the land & the land is in me............................................... 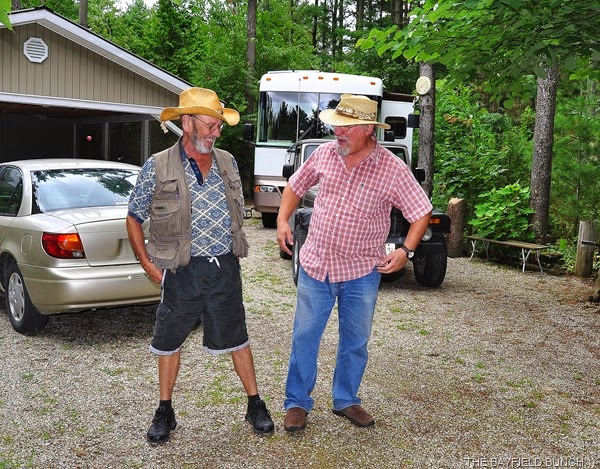 YEP, WE GOT US SOME KIBITZING GOING ON HERE ALRIGHT
GROANER'S CORNER:(( A priest, a rabbi, a doctor and a lawyer are gathered at a mutual friend's graveside to mourn his passing. The priest says to the others, "I think our good friend would have liked to take something with him to his next life." He pulls a $100 bill from his wallet and drops it on the casket.
The rabbi agrees, "That's a fine idea," and drops his own $100 bill on the casket.
The doctor, not to be outdone, does the same.
The lawyer murmurs, "What a wonderful thought," as he gazes down at their friend's casket. Whipping out his pen, he quickly writes a check for $400, drops it into the grave and takes the three $100 bills as change.