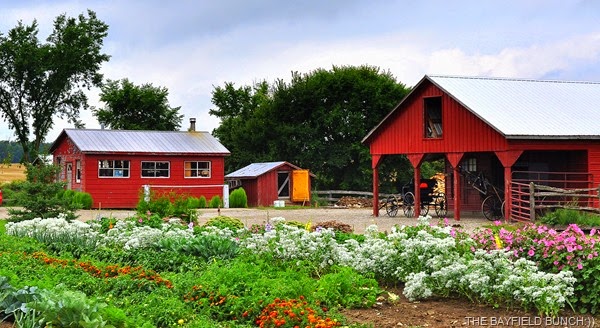 HOW CAN YOU TELL PHEEBS & I WERE UP IN MENNONITE COUNTRY AGAIN TODAY
Kelly had some errands to run in Goderich.  Rained in the night & the air was muggy with lots of bugs.  Flopped into my recliner with fans going & thought, 'no way am I gonna sit here all morning'.  Minutes later Pheebs & I had the windows down in the Jeep & we were off on another mystery tour.  It's always a mystery because we never really know where we are going until we are almost there…………..wherever there turns out to be. 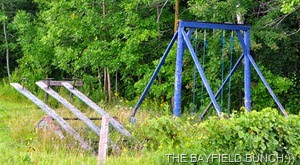 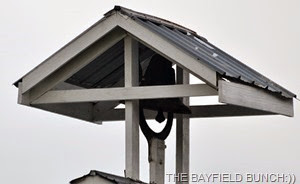 LAUNDRY DAY IN THE COUNTRYSIDE

SOME OF THESE MENNONITE FARMS HAVE THE NICEST FLOWER GARDENS
Swung through Clinton's Tim Hortons for a standard small coffee & carrot muffin.  Soon as I turn in there & head towards the drive-thru Pheebs goes bonkers.  She knows where all our stops are.  From there it was out on the muddy country roads.  Muddy because of the overnight rains.  Didn't take us long to get the Jeep all grundged up.  With every pit stop we managed between the 2 of us to drag copious amounts of mud into the Jeep.  We just grinned at each other & felt very much at home.  Despite a heavy overcast we did manage to find us a few photos along the way.

SHEAVES OF WHEAT ARE STACKED BY PITCHFORK & CALLED STOOKS AS IN ‘STOOKS OF WHEAT’
Our North-East travels did manage to swing us back into a westerly direction after awhile & we soon began to see the big wind turbine Monsters on the distant horizon.  Figured I'd head on over that way & see what progress was being made on the towers.  Closer I got the soupier the roads became as I began to encounter heavy construction machines & trucks on the recently rain soaked roads.  Spotted a big 18 wheeler carrying one of the giant blades to a wind turbine site.  Swung in behind the little convoy of trucks until they reached their destination.  Interesting watching the big truck manoeuvre. 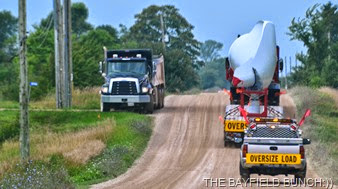 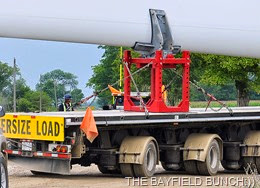 THESE COUNTRY ROADS WERE SURE MUDDY 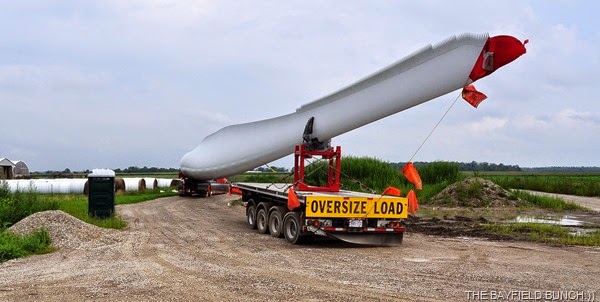 THE BLADE NEARS IT’S FINAL DESTINATION IN A NEARBY FARMER’S FIELD
Spotted another wind turbine not far away with a big blade assembly hanging off the end of a crane.  They were obviously hoisting the big blade hub to the top of the tower to connect it to the nacelle.  It was about a quarter mile away in a field but I did manage to get a few photos.  Wasn't until I enlarged the photos later at home that I noticed a construction worker atop the nacelle at one end waiting for the big blade assembly to be swung into place & fitted.  Unfortunately I was running out of time & couldn't wait to see the final connection.  I did manage to get a last photo from a different angle though showing the joining almost complete.  Had to be home by 1:30. 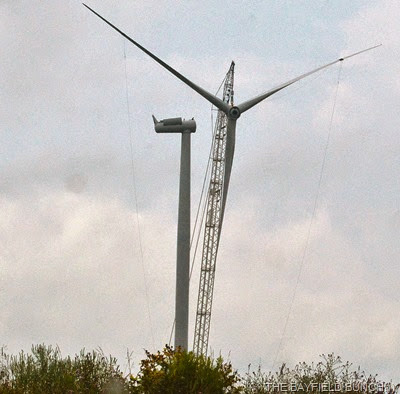 Reason I had to be home was kind of coincidentally linked to these many wind turbines in a round about but maybe direct way.  We had a fellow coming at 1:30 to have a look at our aging & costly electric furnace & give us a quote on swapping it out for a new gas one.  Our monthly electric bill has become crippling.  The cost of electricity has gone through the roof & Ontario now has the distinction of having the most expensive electric rates in North America.  Kelly & I & millions of others here in Ontario have alarmingly watched our monthly bills sky rocket these past years & months.  We know of the gross mis-management of our electric company called Hydro One but what we hadn't realized according to this WIND ONTARIO article was how this whole wind turbine project could very well be part & parcel of our escalating rates.  I did read the article & must admit I did think about half a dozen points were exaggerated but other than that I think there is a lot of food for thought in this Wind Ontario website.  And again, politics, politics, politics:(( 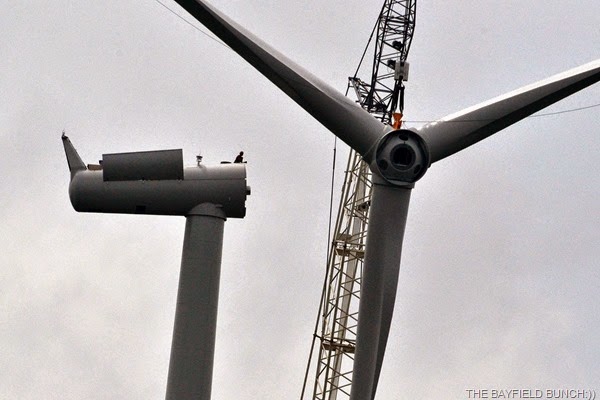 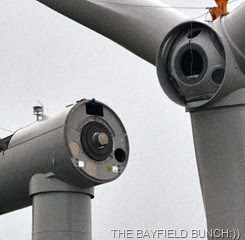 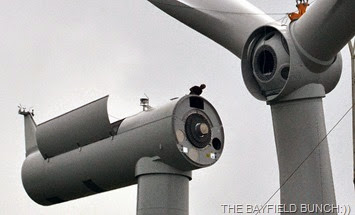 THESE VIEWS ARE FROM WEST OF THE WIND TURBINE

THIS VIEW FROM THE EAST SHOWS THE TWO SEPARATE COMPONENTS NEARING CONNECTION
Sure is worrisome with this deluge of rain in our area of Congress Arizona these past few days.  What will we find when we reach our little adobe ranch house sometime in probably late October.  Will our new roof on the north end of the house have done it’s job?  Will the small leak between the living & dining room have worsened?  What about the stuff in our garden shed, did I remember to get things high up enough from the floor knowing it does have water flow in there?  We haven’t heard anything from the folks keeping an eye on our place so we’re thinking maybe no news is maybe good news.  Hope my utility trailer hasn’t floated away.  We do love our little place there but sometimes we think maybe we are just toooooo far away for toooooo long a period of time…………………….

GROANER'S CORNER:(( A small town prosecuting attorney called his first witness to the stand in a trial -- a grandmotherly, elderly woman. He approached her and asked, "Mrs. Jones, do you know me?"  She responded, "Why, yes, I do know you Mr. Williams. I've known you since you were a young boy. And frankly, you've been a big disappointment to me. You lie, you cheat on your wife, you manipulate people and talk about them behind their backs. You think you're a rising big shot when you haven't the brains to realize you never will amount to anything more than a two-bit paper pusher. Yes, I know you."  The lawyer was stunned. Not knowing what else to do he pointed across the room and asked, "Mrs. Jones, do you know the defense attorney?"  She again replied, "Why, yes I do. I've known Mr. Bradley since he was a youngster, too. I used to babysit him for his parents. And he, too, has been a real disappointment to me. He's lazy, bigoted, he has a drinking problem. The man can't build a normal relationship with anyone and his law practice is one of the shoddiest in the entire state. Yes, I know him."  At this point, the judge rapped the courtroom to silence and called both counsellors to the bench. In a very quiet voice, he said with menace, "If either of you asks her if she knows me, you'll be jailed for contempt!"
Posted by Al Bossence at 8/20/2014