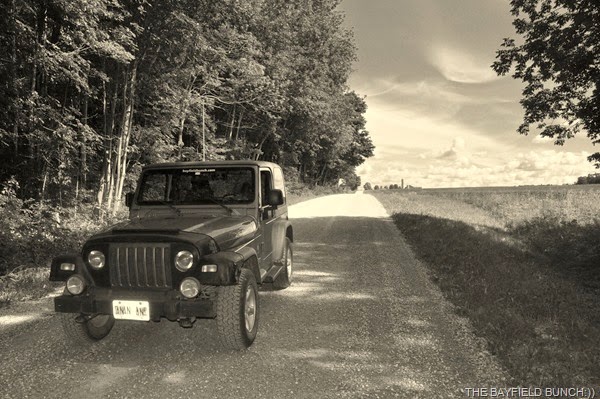 I usually finish up my daily post somewhere around 9 ever night.  Into my PJ's, out to the living room & stretch out in my recliner for some TV time.  Kelly's in her recliner & Pheebs is all stretched out on her very own couch.  Same one we had in Winnie The Bago over the winter.  As is routine Kelly heads off to bed somewhere around 9:30 or 9:45.  I hang on until 11.  TV off, stove light off & a small night light on.  I shuffle off down the hall to bed with the Pheebs trotting right along behind me.  She waits until I have flopped onto my bed without hurting myself then lays down on her special doggy mat right beside my bed.  That's how we end each & every day here in Bayfield.  Morning starts for us usually somewhere between 5 & 6 a.m. & again it is pretty much routine.  I roll over onto & bump into a snoozing furry object.  Well sort of snoozing.  No need to open my eyes because I know it's the Pheebs.  She always climbs on my bed sometime in the night when I'm sleeping.  But now begins the fun.  If I want to sleep in a little longer I have to be careful to make only sleeping sounds & not waking up sounds.  A waking up sound could be a deep breath & that's just exactly what Pheebs is waiting for.  If I'm not quick enough to get a cover pulled over my head my day starts with a whole bunch of slurpy doggy smooches on my face & an over exuberantly happy bouncing little Pheeber Buns on top of me.  We go through this every morning & our frolicking lasts for nearly a minute sometimes before she lets up & I am able to roll out of bed & onto my feet.  What a super great way to start every day I’d say:)) 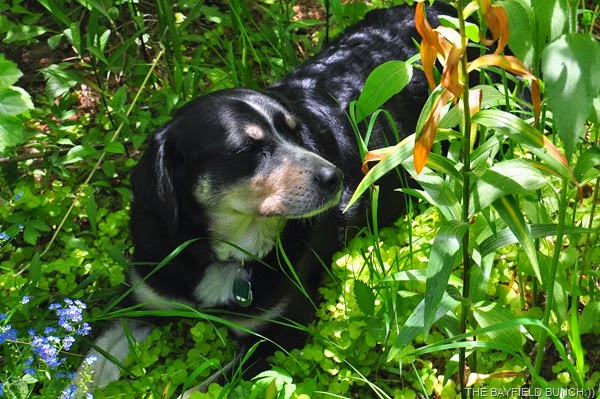 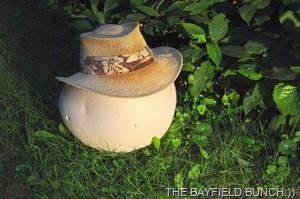 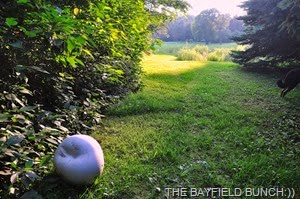 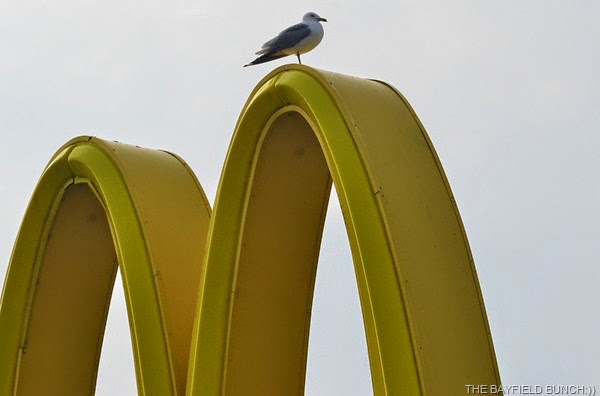 OH GEE I WONDER WHERE THIS FELLOW LIKES TO EAT
Kelly noticed we still had last year's calendar on one of our wall & in taking it down she casually flipped though it.  With the words, "well we sure had a different summer last year" she pointed out last summer’s Doctor appointments, a couple emergency room visits, blood work appointments, tests & procedures in both the Goderich & Stratford Hospitals.  Big change this summer from last summer.   However, we are off to London's University Hospital this Friday morning where Kelly has an appointment with her liver Specialist.  Far as we know it will just be a routine check-up to bring her up to date on how her auto immune problem is doing.  As I said, it's been a much better summer for both of us on the medical front.  My hip pain cleared up just over a year ago & other than the everyday stiffening arthritis in my legs & the fact I am overweight I'm doing fine.  And of course Pheebs is always her happy little self as well.  Motorcycle is running good, Kelly loves her Sunbird, we finally have an RV we are totally happy with & the Jeep continues to be my all time favorite vehicle. 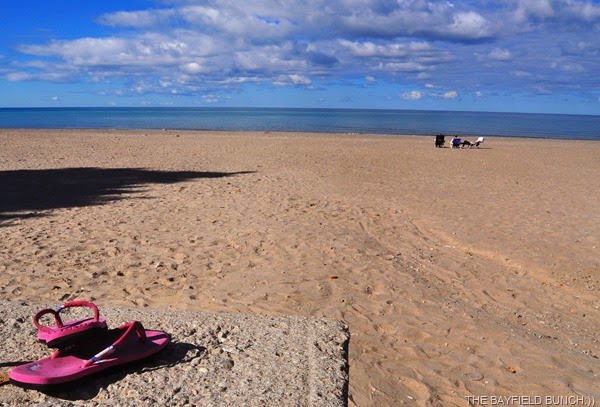 Now speaking of vehicles I am reminded of a post I wrote back in 2007.  I looked up that post a short while ago & updated it.  A few guys out here might find it kind of interesting because It's all about cars, pick-trucks, motorcycles, RV’s & stuff.

1959 TRIUMPH TR3
ARCHIVE MEMORY:: (Updated:: August 2014)   ‘A Lifetime Of Old Clunkers And Some Nice Ones Too’………………….Yup that's really me in the Triumph TR3 above:)) Originally wrote this article in response to some postings on the 50+ forum one time by some guys talking about all the different cars they've had over the years. It got me thinking back to seemingly simpler times & ways of doing things. Once I sat down with a pencil & paper & began putting to-gether a list of remembered vehicles I was truly surprised at the sheer number of vehicles that have passed through my hands.  And trying to remember them all sure has been a great exercise for clearing the aging cobwebs out of my brain. Hard to recall exact years of the vehicles but I think most of them are right or very close.  One of the reasons for so many vehicles was that years ago you could buy a used car from a buddy for fifty bucks or off a lot for a couple of hundred. Sometimes you just traded stuff. All my vehicles were used except for a 73 Mazda 808 & an 85 Pontiac Fiero. Didn't need expensive insurance (if any) back in the 60's, no costly safety checks, & sometimes ya got away with an expired drivers license for awhile too. And sometimes you didn't even bother changing over the ownership before you sold it again. Oh dear!! To the best of my knowledge here are the vehicles I've had. I probably have forgot a few VW Beetles here & there.  Loved those things & ya could take em anywhere.....& I did.  As far south as Sarasota Florida, east to Halifax Nova Scotia, & west to British Columbia’s Okanagan Valley.  Well, here’s my line-up…………………………………………………………………..
1 - 1961 Volkswagon Beetle (my very first car. but being a smart-aleck teen-age male, I wrecked it:((
2 - 55 Ford (red & white with big rust holes in the floor))
3 - ?? Ford Falcon (blue....hit a parked car with it & that was the end of that!!) 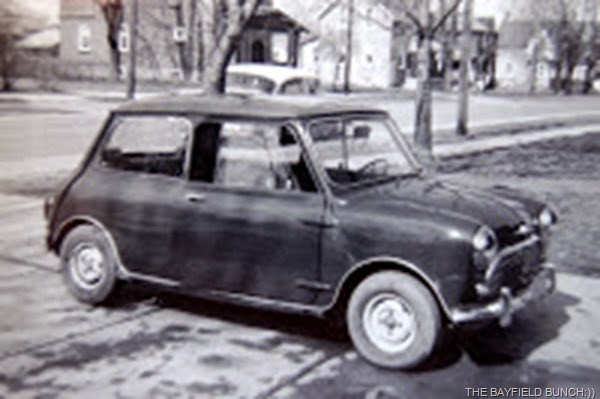 7 - 64 VW Beetle (white, bought it in Halifax Nova Scotia & drove it back to Tavistock Ont.) 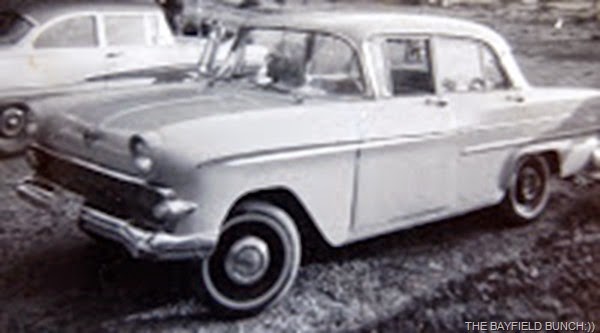 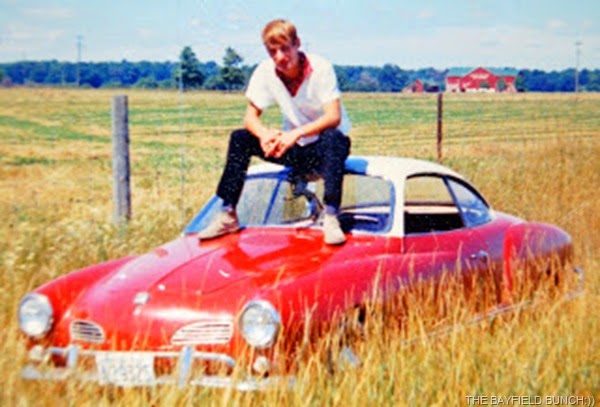 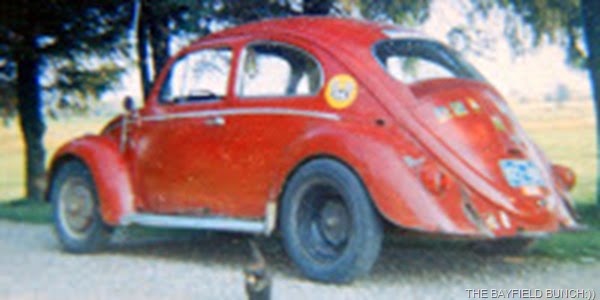 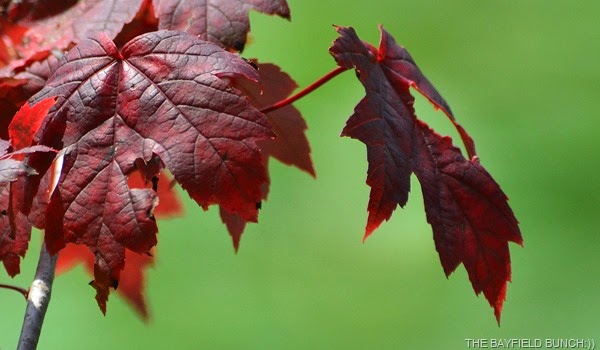 GROANER'S CORNER:((  An artist asked the gallery owner if there had been any interest in his paintings on display at that time. "I have good news and bad news," the owner replied. "The good news is that a gentleman inquired about your work and wondered if it would appreciate in value after your death. When I told him it would, he bought all 15 of your paintings."  "That's wonderful," the artist exclaimed. "What's the bad news?"  "The guy was your Doctor."