IF WE MOVE TO TOWN SOMEDAY WHICH TOWN WILL WE CHOOSE 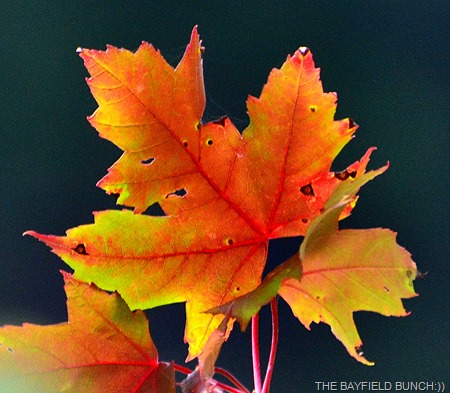 Imagine my surprise this morning when Kelly expressed an interest in coming along for a country drive with Pheebs & I.  Pheebs was a little put out about having to take a back seat but she soon got over it as all three of us headed out on a weatherly beautiful Monday morning.  A couple errand stops & we were soon in downtown Goderich to have us a look at the town's Court House square where a permanent outdoor stage is currently being erected. (when I know more about what this stage will be used for I will let you know) Although the center of town is actually round it has become affectionately known as 'the square' over the years.  It was this area of Goderich which was heaviest hit by a devastating tornado 3 summers ago.  It is truly amazing how parts of the downtown area in Goderich are being & have been rebuilt.  As so often happens after the winds of destruction have had their way, new & better ways arise to replace that which has been destroyed.   Good job Goderich, well done & keep up the good work. 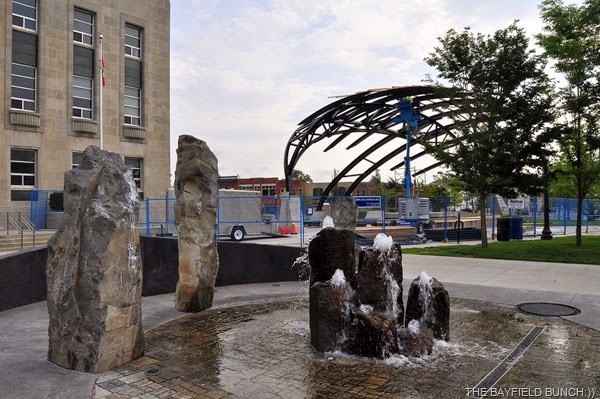 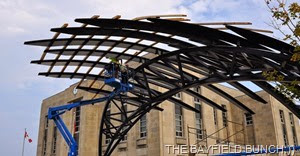 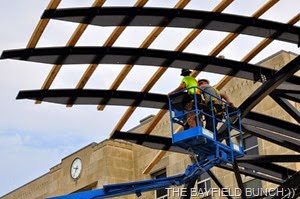 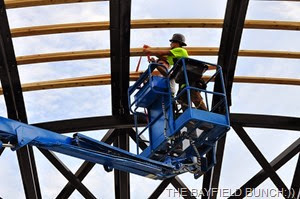 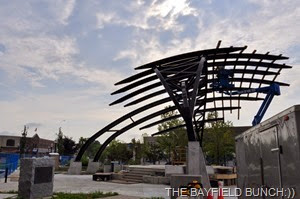 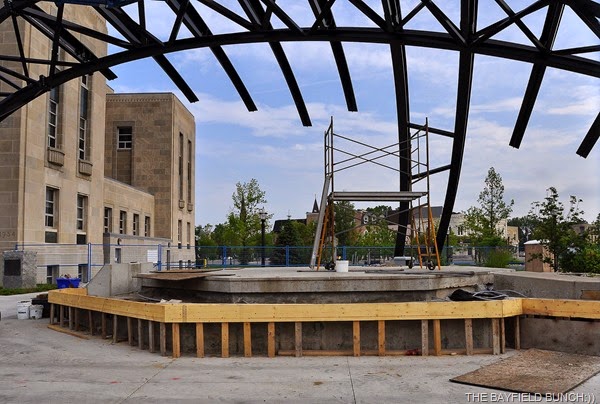 THESE NEW BUILDINGS NOW UNDER CONSTRUCTION HAVE RISEN FROM ONE OF THE MOST DEVASTATED CORNERS ON THE SQUARE…;CARMAN CAMERAS; USED TO BE AT BOTTOM RIGHT

A drive down around the harbor & out along the beach to a dog 'off leash' area.  Pheebs was needing a run & we was needing a stretch.  Our drive around Goderich this morning re-affirmed some long range plans we had first touched on a few years ago & set off on a back burner to simmer for awhile.  Both Kelly & I like Goderich with it's scenic harbor & boardwalks along the beach.  Fine old homes with a relaxed easy to get around atmosphere.  At some point we will probably have to move into a town & for us we decided awhile back Goderich would be that town.  As much as we would both like to live in the country we have to be practical about that.  We’re not exactly getting any younger & with some possible health issues in the future we have to look ahead a few years to a time when winter travels south may no longer be an option.  Winter in the country around here can be brutal.  Drifted in laneways, icy snow blocked roads to town.  Higher fuel bills from being out in an open landscape.  A vehicle is needed for everything.   Any kind of an illness could leave us in a tough spot, etc.  Just simple realities one has to consider now that time seems to be marching a little faster for us.  If we were 10 years younger we wouldn't even consider living in a town but at this age & stage of the game we have to start planning ahead more practically.  A little more thinking with the head & a little less thinking with the heart.  Darn!!  When health begins to deteriorate for us as it naturally does for everyone we want to be in the right place at the right time to deal with that next upcoming phase of life……………….Just a few thoughts today:)) 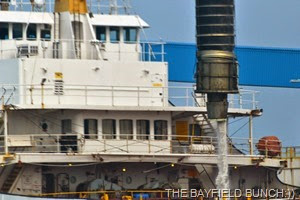 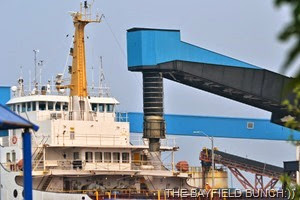 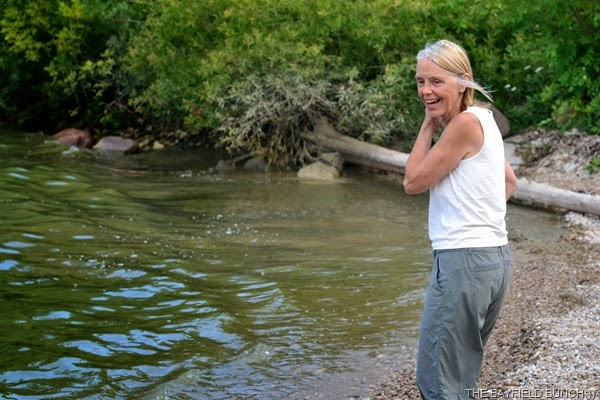 KELLY LAUGHING AT PHEEBS BY THE WATER’S EDGE…PHEEBE GOES TO GREAT LENGTHS TO KEEP HER PAWS DRY
In a few months I will be 70 years old & I am a little surprised by that.  I never really figured on making it this far.  Don't ask me why but I just never thought I would.  Many of my friends didn't.  I never thought much about aging through my early & mid 60’s but the looming number 70 just seems to have a bit of a hard edged reality check to it.  Can't tell you I am all happy faced & cheery to be moving into my 7th decade.  I don't buy into that false bravado way of thinking the best years of life are still ahead.  Centuries of simple human reality clearly tells me it is not.  It is only natural for any living being, plant, animal or organism to decline with age.  Its an inescapable fact.  Yes we try to make the best of it of course but the inevitable is the inevitable.  Nothing to do with that positive/ negative thinking thingy here & everything to do with the reality of our aging minds & bodies.  I don't think there is one person in their Senior years on this entire planet who wouldn't give just about anything to have not only their mental & physical youth driven health & well being back .  I don't think any of us years ago ever said, 'oh gee I can't wait to get old, it will be such fun. 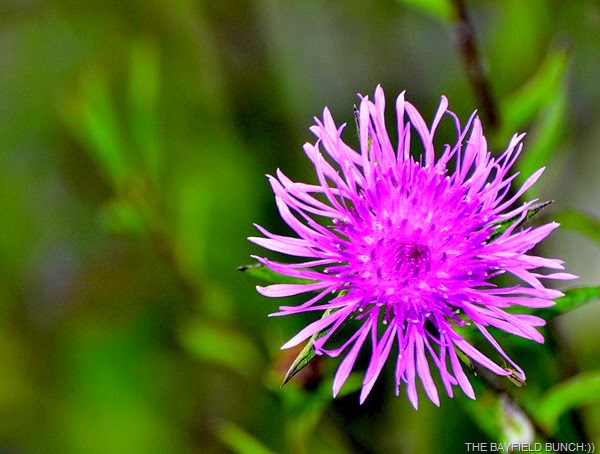 The remainder of our morning drive took us again up near Dungannon Ontario where we stopped to let Pheebs out to see her Llama Pals.  Or could these be Alpaca’s.  Although Pheebs did a lot of running up & down the fence line she just couldn't seem to stir up any frenzied interest.  Her Pals just kind of stood off aways curiously watching her. 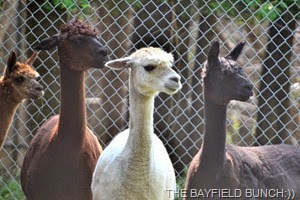 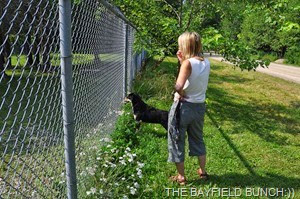 Lots of WIND TURBINE action going on in this area so we drove along slow having us a look at the progress.  It's a long week-end here in Canada so there were no workers around.  The country roads northeast of Goderich were quiet.  Sunday night we watched a TV show on wind turbines & our area of South-western Ontario was part of the shows focus.  Wind turbines are a real mixed bag of emotions for folks around here.  Well anywhere as far as that goes.  Where do the fantasies stop & the facts begin.  Who's right & who thinks they’re right.  The show left us with more questions than answers.  One doesn't think too much about these giant windmills until they begin popping up in one's own backyard & neighborhood like a bunch of white & waving armed manic mushroom Monsters.  And then there's the health risks & symptoms people living close to these wind turbines have.  Maybe the problem isn't so much the turbines themselves as it is to their placement close to human habitat.  Yes it's a raw issue here along the Eastern shoreline of Lake Huron & one which local residents have no control over.  The wind turbines are here & they are here to stay……………………. 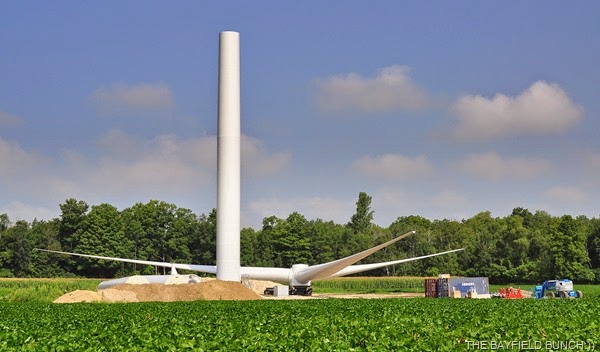 A BIG CRANE WILL SOON ARRIVE TO LIFT THAT BLADE ASSEMBLY UP WHEN THE CENTER TOWER IS COMPLETE…MAYBE TWO CRANES FOR THAT JOB
Thank you to readers for your support & understanding not only in our Shout Box lately but blog comments & emails as well.  And of course a big thank you to my few faithful Facebook supporters.  Bit of a disturbance in our Shout Box these past few days but I'm hoping things will calm down. 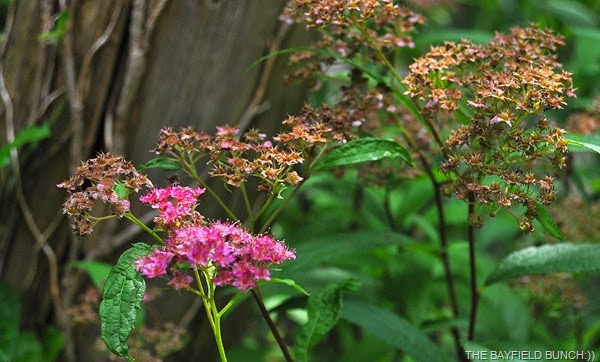 GROANER'S CORNER:((  Anyone who's ever ridden in a cab in Washington DC knows they're some of the world's most brazen drivers. Oddly enough though, their current accident rate isn't all that bad. One day I asked one of the drivers the reason for that. "Easy," he said. "all the really bad drivers are dead now."