SHEEPS, WIND TURBINES & AN ARCHIVE MEMORY ABOUT A NOT SO BRIGHT CRAYON:(( 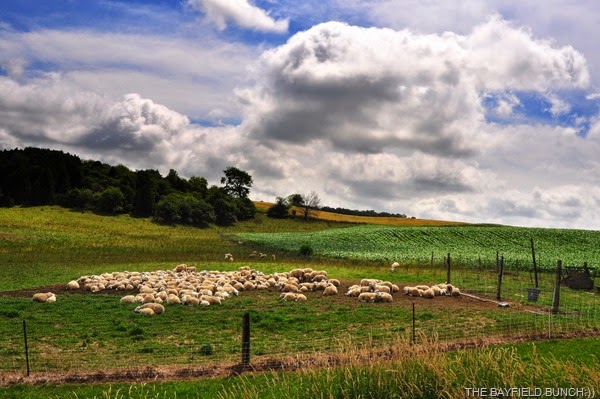 YES I KNOW ABOUT THE ‘S’ ON THE END OF THE WORD SHEEP IN THE TITLE:))

It was the high pitch whine of our zoomerator Hoover vacuum cleaner more than anything else that hurriedly drove Pheebs & I out of the house this morning & off into the much quieter mid-summer picturesque countryside.  Kelly had a cleaning bee going on & of course me & the Kid didn't want to get in the way of that. 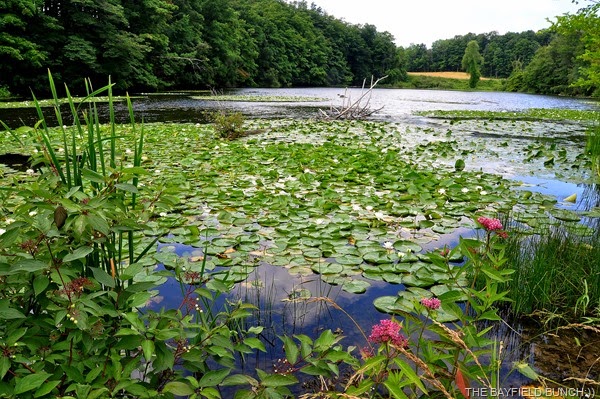 A quick stop in Goderich at Canadian Tire to have a couple extra ignition keys made for the Sunfire & we were back on the road headed out of town.  No particular destination again, just wandering.  I always get excited whenever I see Real Estate signs on rural properties so I always stop & take a couple photos.  Upon returning home Kelly then tracks them down on the Real Estate sites to check on the price.  Of course it is always discouraging but it's fun to look & I do like the excitement high I get.  Well until we look up the price on-line that is.  That's where the dream always get's busted. 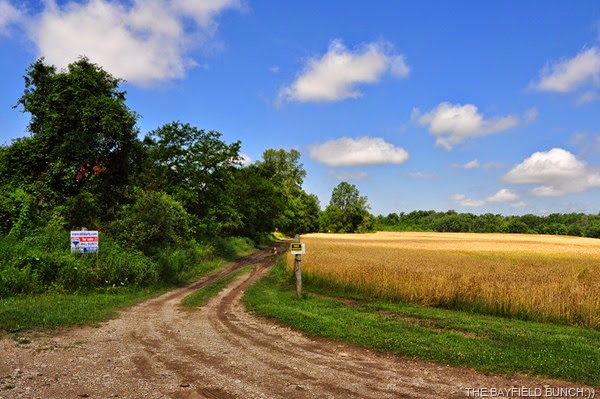 WE LATER LOOKED UP THE PRICE ON THIS PIECE OF PROPERTY & IT TURNED OUT TO BE 40 ACRES FOR $599,000
Nice sunny day with a breeze off the lake & low humidity.  My kinda day.  Pheebs & I stopped to have a close up look at a wind turbine south of Bayfield.  None of the area’s new turbines are on line yet & we were able to drive right up to the base of one in a field.  After our overnight rain the site was soggy so between shoes & paws we probably have as much mud inside the Jeep now as we have on the outside.  Oh Dear, another big clean-up job coming again:(( 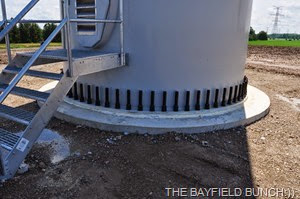 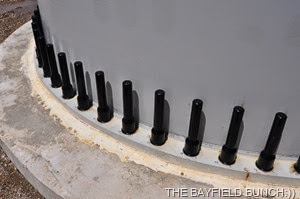 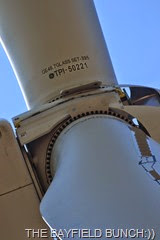 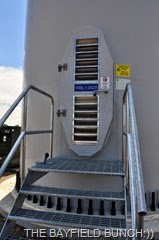 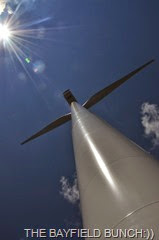 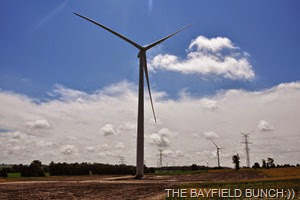 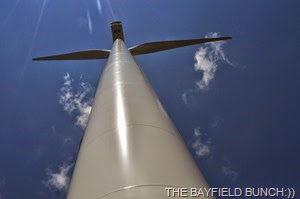 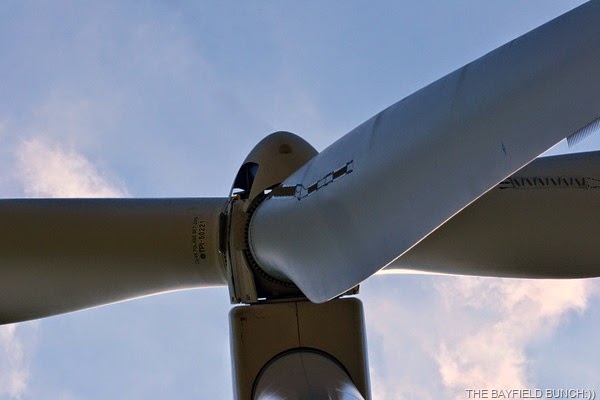 Before I tell you what we paid to have the Motorhome's finish restored let me emphasize the fact that just about anything is always cheaper in the States.  Doesn't seem to matter what it is whether groceries, car parts, hardware, or whatever, it's best to get things done south of the border if one can.  I've had two people tell me they paid $350 to have their rig's done.  One was in Florida (thanks Chris) & not sure where the other one was.  We paid $500 to have the coach detailed.  Well worth it in our minds when you consider the work & expertise involved in the job.  It's a very labor intensive project.  Everything about the coach was in tip-top shape when we bought it except for the oxidation on the finish so having that done now puts a contented & satisfactory smile on my face:)) 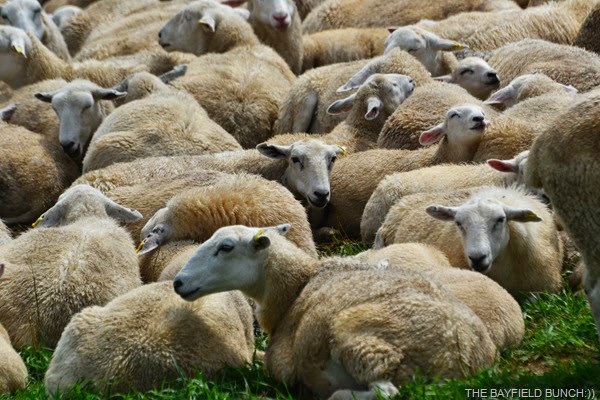 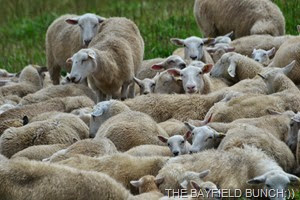 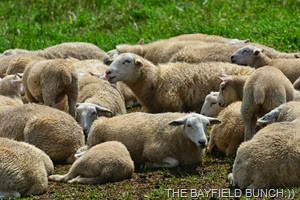 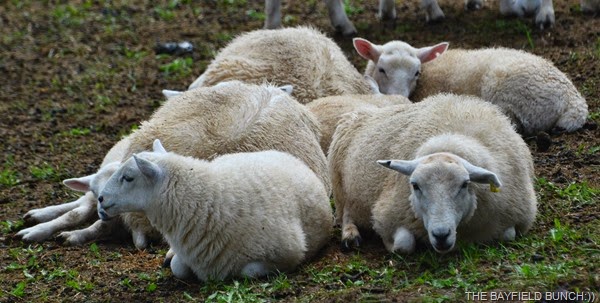 A FINE EXAMPLE OF SOME SHEEPISH TOGETHERNESS TODAY
A commenter in part said, 'new MH with a new finish, new car parked on a new concrete slab.'  I know what the commenter meant but just want to clear that up by saying the MH & car aren't new but yes the Motorhome's finish & our carport's concrete slab are definitely new.  The 03 Triple E Motorhome & the 04 Pontiac Sunfire are new in the sense they are ‘new to us’ & I know that is what the commenter meant:)) 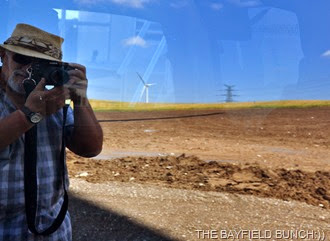 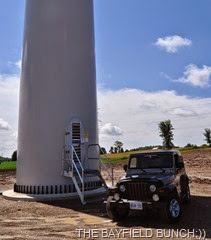 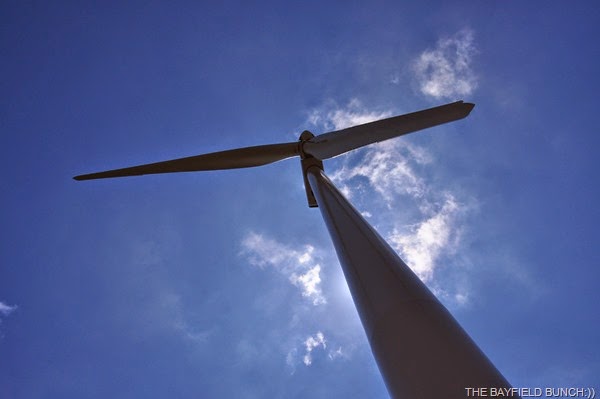 I wrote this back in October of 08.  We were just about ready to head for the southwest with our new to us 33’ 2003 Class A Damon Challenger.  I entitled it 'Not The Brightest Crayon In The Box'.

ARCHIVE MEMORY::  Well, my brain did it to me again just a few days ago!! The hose connection on the side of the motorhome has always been a pain in the butt for attaching or detaching the water hose. In fact attaching a garden hose to a tap has always been one of those things causing me grief.  Usually end up having to use the vice grips. Figured there must be a better way of doing things & wondered about some kind of hose quick disconnect apparatus. I don't use that system at home here but remembered seeing a couple of plastic dis-connect pieces laying in a box somewhere. Rounded them up, grabbed the rigs water hose, & had a look at hooking everything up. No problem getting the larger piece threaded onto the rig but then the hose end didn't seem to match either one of the plastic fittings. Figured there must be a piece missing or something or maybe it's some kind of special RV device that is needed. At no point did my brain step up to help me figure out this problem. A few years ago it would have said, "hey dummy, try the other end of the hose!!" But, oh no, it was gonna keep that little tidbit of information to itself. Sometimes brains do not like to share things with their owners. Especially in these later years & I'm convinced my brain derives great pleasure in driving me right round the bend whenever it sees a golden opportunity to do so. With the 2 plastic pieces in my pocket, Kelly & I head down to STORMRUNNER RV SALES & SERVICE, our local RV dealer. Well, it didn't take Harry long to size up the situation & realize he's obviously dealing with someone as thick as a brick here. He quietly pointed out I was trying to connect the wrong end of the hose to the right end of the coupler!! So embarrassing:(( I made a comment about not being the brightest crayon in the box & I heard Harry's wife Dianne over at the main counter give out a little chuckle. "Hey," she said, "at least you do a good job with your blog & we enjoy reading it." Hey, I thought to myself, now there's a kind person who understands the thickness of a human brick & the failings of an aging male brain. Harry, on the other hand was probably considering submitting my name for the annual dunce cap Darwin awards:(( Needless to say, I felt pretty stupid for the rest of the day:((  Update:  Harry & Dianne actually met us in Bisbee Arizona a couple winters ago & we had breakfast at the BBC. I remember Harry eating up a big mess of grits & gravy.  No idea what the rest of us had.  The BISBEE BREAKFAST CLUB was always one of our favorite eateries when we were Ranch sitting in the area years ago & oh boy I sure do got a lot of great old memories from those early RVing years at the Ranch…………………………:)) 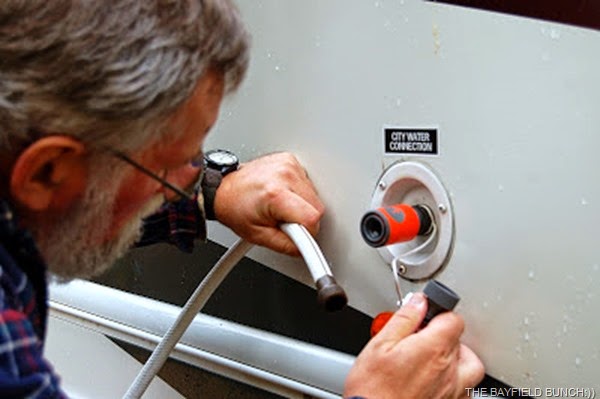 I took the above photo using a tri-pod & self timer on the camera. Do you suppose my brain reminded me how to use the self timer?? Not a chance!! Had to go in the house & get out the camera manual, but hey, the old foggy brain must have taken a little pity on me because it gave me a break & told me right where to find the camera manual. Now, how's that for some rare co-operation:))

GROANER'S CORNER:(( My friend, the manager of a grocery store, nabbed a shoplifter in the act. He was escorting the suspect to the office in the front of the store (near the cash registers), when the shoplifter broke from his grip and tried to run.  After a scuffle, my friend pinned him against the wall and looked up to see a number of surprised customers staring at him.  "Everything's fine, folks," he reassured them. "This guy just tried to go through the express line with more than ten items.
---