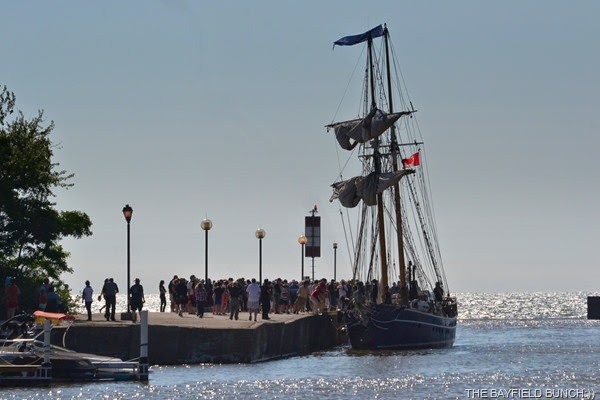 Well there I was Wednesday night after publishing the post with my Benchmark Atlas, my Mr. McGoo magnifying glass & a strong reading light pouring over the States of Colorado, New Mexico, Arizona & Utah.  The first stirrings of my ever present hitch-itch bug were beginning to make themselves felt.  My main focus was southern Utah.  Canyonlands & Capital Reef State Parks, Moab, Natural Bridges, Hovenweep, Page Arizona, etc.  Routes & roads, BLM lands, attractions & a time frame.  Just love pouring over maps.  So many memories come to mind seeing the names of towns & places we have previously traveled to popping off the pages.  Hmmmm, wonder if it's too early to start loading a few things into the rig.  Only about 3 months left before we head out once again onto the scenic highways & by-ways of North America.  Gotta love & totally embrace this Snow Bird lifestyle while it lasts:)) 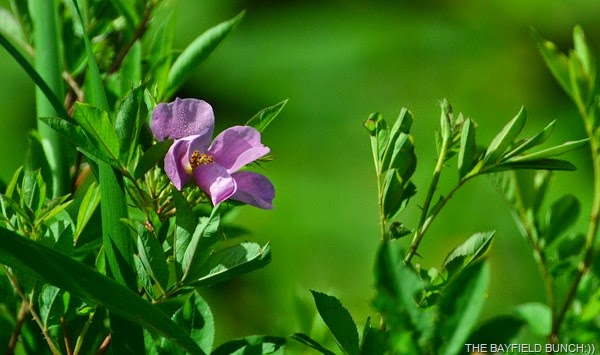 Well I couldn’t believe it either.  I was just out of the washroom after my shower this morning when Kelly said to me, "Here's what's new today, we're getting the Pontiac Sunfire".   Oh, Ooooooooookay.  Last I heard Wednesday was that we were not getting the car & I had been fine with that so now I had to get myself turned around right quick, line up all the ducks again & re-check my checklist as to the number of reasons we felt the Sunfire was a good deal for us in the first place & the right thing to do.  Check, check, check, Okay we're good to go.  You can sure tell who kinda wears the pants in this family eh……………..:)) 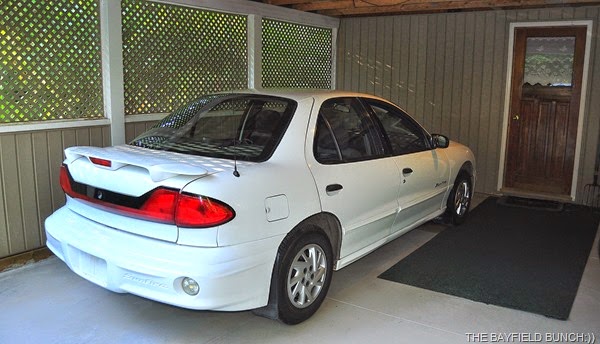 OUR CARPORT IS NOW THE PONTIAC SUNBIRD’S NEW HOME

Pheebs & I had ourselves a nice relaxing country road drive this morning.  (needed some fresh air to clear my head) We didn't go too far but did manage to put a couple hours in stopping here & there to just savour the serenity of rolling farm lands & forests of our rural South-Western Ontario.  Ontario’s West Coast as it is often referred to.  If it wasn't for my  little outings I would be really hard pressed to keep my restless nature in check. 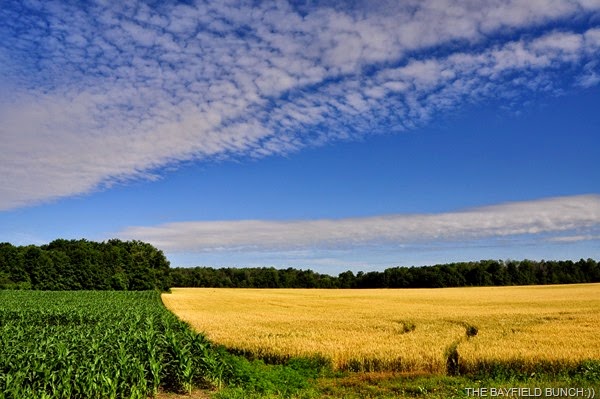 CORN & WHEAT GROWING SIDE BY SIDE

Part of our late morning & early afternoon was taken up with finalizing the Sunfire deal.  It passed it's safety inspection at the Bayfield Garage with flying colors.  We did the paperwork at Freds, shook hands on the deal & the Sunfire is now in our carport.  It's been quite a couple days going back & forth with this car thing but the deal is done now so it's off to our next  challenging change......whatever it may turn out to be:))  Oh, talked to Jerry in Hensall this afternoon & we can pick up the Big EEE Friday:)) 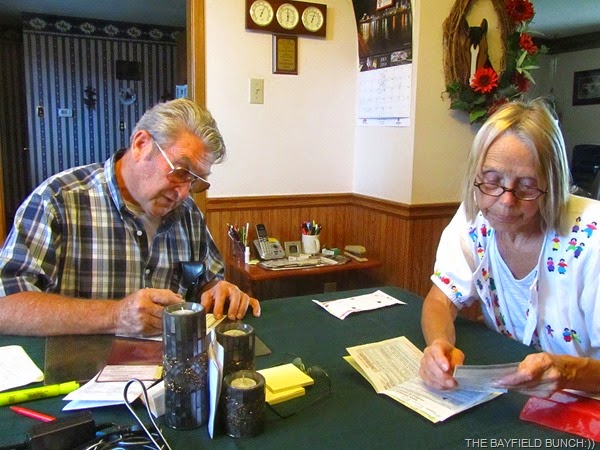 INKING THE CAR DEAL IN FRED’S KITCHEN ABOUT 1:15 THIS AFTERNOON

Two TALL SHIPS sailed into Bayfield Harbor this afternoon shortly after 5.  The TS Playfair along with her sister ship S.T.V. Pathfinder.  Based in Toronto these 2 ships are both youth sail training vessels crewed by 13 to 19 year old teen-agers with the exception of a fully experienced adult Captain.  They will be in Bayfield for the week-end welcoming visitors aboard to tour the ships.  The Playfair was actually commissioned by Her Majesty Queen Elizabeth II in 1974, and remains the only Canadian ship to be commissioned by a reigning monarch.  Of course you remember my story a few days ago about me & the Queen Of England, right………………..:)) 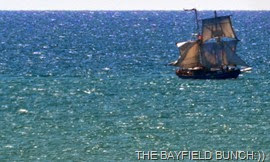 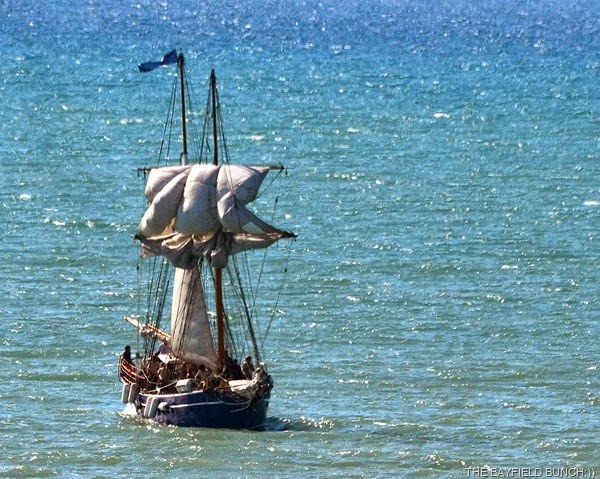 About 4:45 this afternoon I slipped on over to Bayfield's Pioneer Park overlooking Lake Huron & took a few photos of the tall ships coming in.  They were still quite away out so my long telephoto shots leave a little to be desired.  Slipped down to the north side of the Bayfield River & managed a couple more long shots when the ships tied up alongside the main pier. 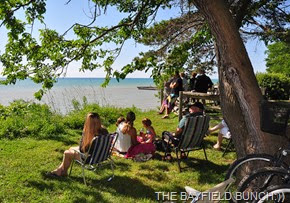 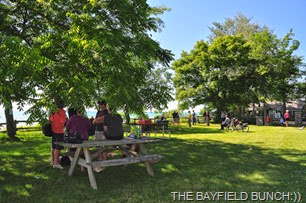 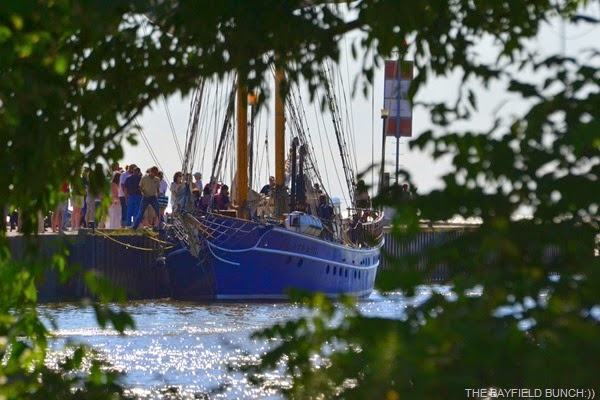 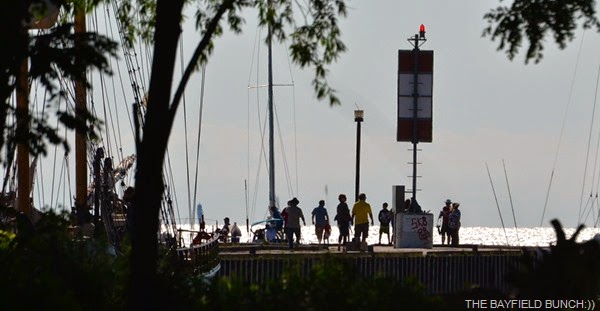 GROANER'S CORNER:(( A man walks into a shoe store and tries on a pair of shoes.  "How do they feel?" asks the sales clerk.   "Well ...they feel a bit tight," replies the man.
The assistant promptly bends down and has a look at the shoes and the mans feet. "Try pulling the tongue out," offers the clerk.  Theyth sthill feelth a bith tighth," he replied