NOT A WHOLE LOT ON MY MIND TONIGHT 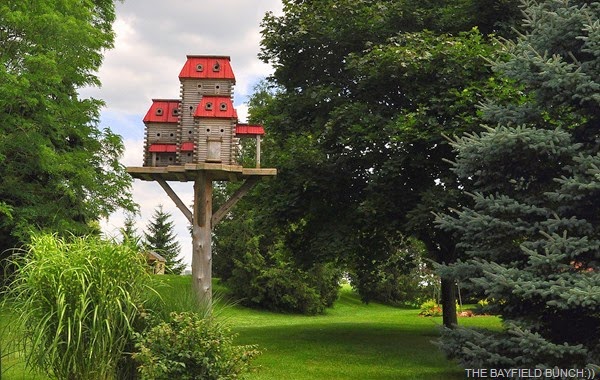 A RURAL & VERY WELL TO DO PURPLE MARTIN BIRD HOUSE

Decided not to try & hook up the Big E's surround sound rear left & right speakers.  It's not that it can't be done it's just that I am not the guy with the patience & carpentry skills to run the speaker wires behind panels & drill holes through cupboards to feed those wires invisibly from the receiver to the speakers about 12 feet away.  Rolled the speaker wires up tonight & put the speakers back in the closet & that was that. 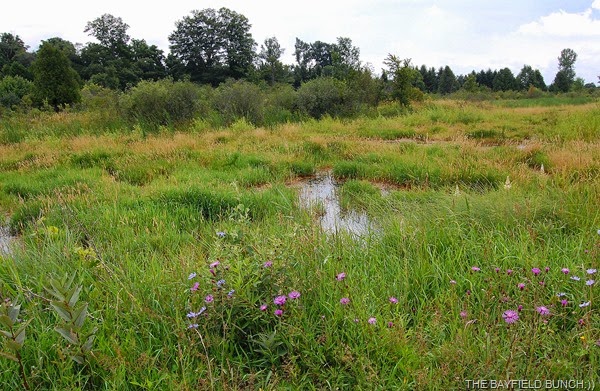 JUST TOO MANY BUGS, FLIES & MISERABLE MOSQUITOES OUT THERE FOR PHEEBS & I TODAY
Pheebs & I took a drive over to the Hullet-Marsh this afternoon in hopes of hiking around & taking some photos.  Of course the biting flies & miserable mosquitoes had other ideas & we had to abandon our walk & head on back home.  Other than that little outing for an hour the day was about as dead as a dead day can get. 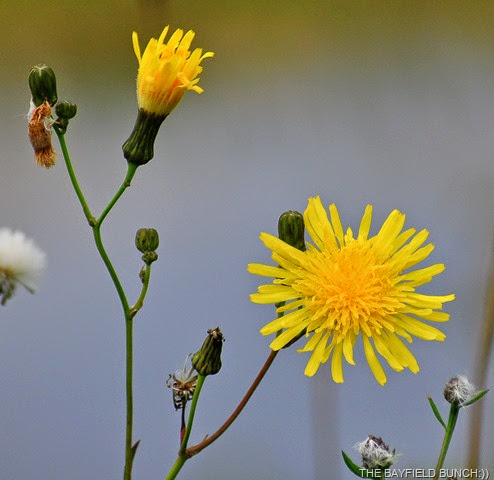 Not a whole lot my mind can think to write about tonight so I will leave you with an archive memory.  It's one I have linked to half a dozen times before over the last 6 years but here it is again for any new readers that might be out here. 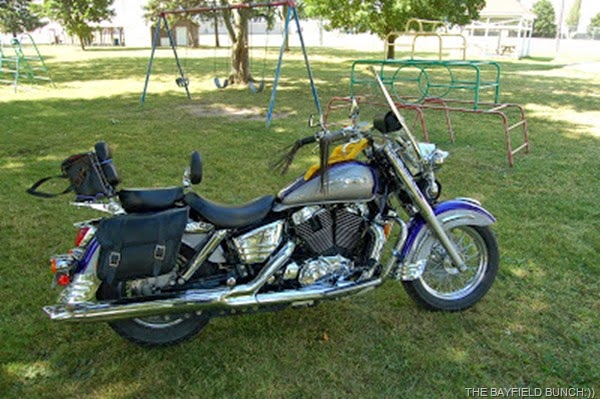 ARCHIVE MEMORY::  August 26th, 2008............. "Is that a diesel motorcycle sir". Thought it odd hearing those words coming from the young gas attendant fella at a Shell station in Goderich Ontario a few days ago. I had just rolled in on my motorcycle & topped up my gas tank. I generally run regular gas in the bike & about every 4th tank or so I fill it up with Premium. To-day I decided on premium, so by-passed the regular nozzle & without looking, reached for the premium nozzle on the other side of the pump & filled er up!! I said to the young fellow, "no, this is a gas motorcycle, to which he kindly replied, "well, you just filled up your motorcycle with diesel fuel......sir." ARRRRGGGGHHHHHH!!!! There it was, right on the pump beside me....DIESEL. Well, to say I could feel my stomach sliding right out from under me would be putting it mildly. What a huge feeling of frustration & anger I had with myself. (not to mention embarrassment) Just taking things for granted & not paying attention to what I was doing again!!!!
Wheeled the bike around the corner of the garage, slunk out of sight & got the owner's manual out of the saddle bag. Tried to find out if there was some kind of a gas tank drain valve. Couldn't find anything. Even got down on the ground & had a close look for some kinda valve or something. Suddenly dawned on me that if I had a hose I could probably siphon the diesel fuel out right out of the tank. No hose at the gas bar so walked across the large parking lot to a Canadian Tire store at the far corner. Got me a siphon hose with a plunger thingy on it & headed back. The young fellow at the gas bar fetched me a big white 5 gallon plastic pail. The siphon didn't work well because the siphon part was a solid plastic tube so wouldn't bend well to get down into & around the bottom of the bikes tank. Back to Canadian Tire for a second time & got a 3' section of flexible gas rubber hose. Should have done that in the first place because this hose worked perfect except for one little thing. No suction plunger on this one so I had to use my mouth to start the diesel fuel flowing. Diesel fuel in my mouth, up my nose, in my beard down my chin, on my pants & of course I did not miss my shoes. The bucket I was draining it into tipped over at one point so I had quite a mess of diesel fuel going on all over the place. Moved the hose around in the tank making sure I got as much fuel out as possible & by the time I was done I had about 3 gallons of diesel fuel in the 5 gallon plastic pail. Probably another half gallon on the ground & another half gallon on me!! Pushed the bike back out to the gas island, DOUBLE CHECKED THE GAS PUMP & re-filled my tank with V-Power Premium....GAS!! This whole ordeal lasted about 40 minutes but luckily ended well. If that young sharp eyed gas attendant hadn't noticed my mistake I would have rode out of there with a tank full of diesel fuel & promptly ruined my motorcycle engine. That would have been a major repair!! I thanked him & insisted he take $20. Probably should have given him another ten for not laughing at me & calling me a dummy. He didn't want to accept the $20 but I pulled rank on him using my superior age factor. Truly a nice kid. Next stop was the car wash to hose down the diesel infested motorcycle & the last stop of the day was home to hose down the diesel infested & somewhat embarrassed human!!!!

GROANER'S CORNER:((  A father took his five-year-old son to several baseball games where The Star-Spangled Banner was sung before the start of each game. Then the father and son attended church on a Sunday shortly before Independence Day. The congregation sang The Star-Spangled Banner, and after everyone sat down, the little boy suddenly yelled out, "PLAY BALL!!!"

The banquet was about to begin when the master of ceremonies was informed that the clergyman invited to give the blessing was unable to attend. He asked the main speaker if he would oblige, and the man agreed. He began, "There being no clergyman present, let us thank God."