NEARBY TORNADO TOUCH DOWN, TRAVEL TALKS & WE HAD THE BIG WHEELS ROLLING TODAY:)) 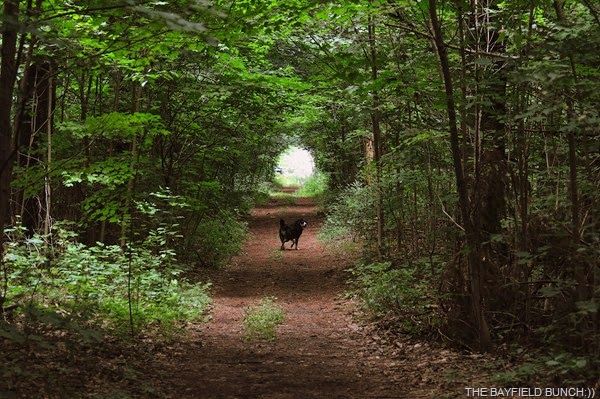 While putting together Sunday night's post I noticed darkening skies outside our sunroom.  Checked our areas real-time weather & saw a band of fast moving  thunder storms coming in across Lake Huron heading right for us.  Our electricity goes off here with a mere sneeze so quickly published the blog early before we lost power.  Twenty minutes later with rain, thunder & lightning upon us our electricity went off & came on 3 times in 5 minutes.  Checking the radar again I could see the bulk of the storm had veered south of us clobbering Grand Bend & it was confirmed today that the area immediately south of Grand Bend was indeed struck by a Tornado.  One person injured with large trees down on houses & vehicles.  Funnel clouds later spotted near Kitchener Ontario.  We are halfway between Grand Bend & Goderich & it was Goderich just 3 years ago 13 miles away that had a tornado tear up the town resulting in one death.  That's 2 tornados on either side of Bayfield in the last 3 years.  That makes us a bit nervous here in amongst our towering pine trees. 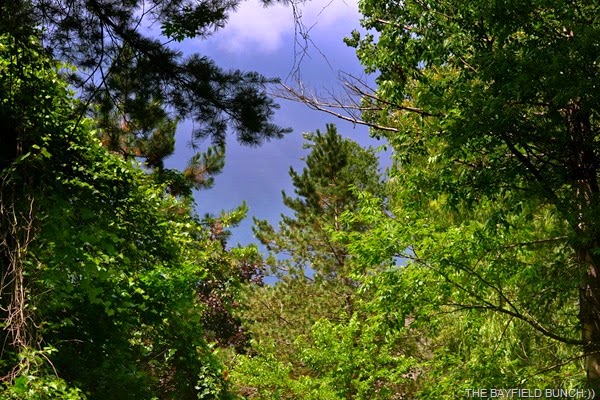 Knowing we had a storm headed our way we put the Big E's awning up on the rig & pulled the slides in.  Battening down the hatches if you will.  Everything was fine through Sunday night's storm so figured we'd take the Motorhome for a run this morning to charge up the engine battery & just give those sitting tires some exercise.  Needed a few things so we all piled in the rig & headed ourselves off to Goderich.  Nice sunny cool morning for a drive & just love getting behind the wheel of that Motorhome to go somewhere.  Smoothest riding & quietest running RV we have ever owned.  Just a real treat to drive something like that. 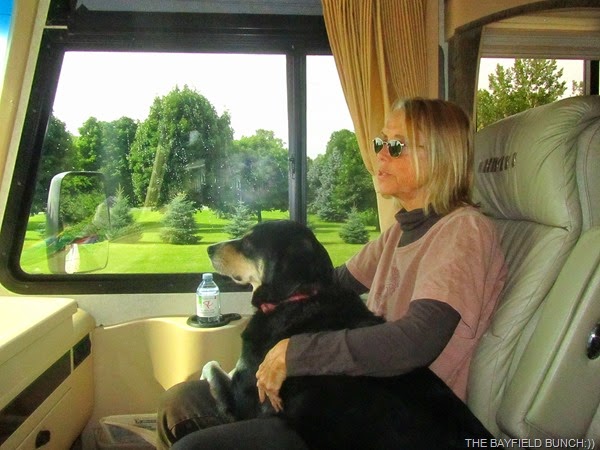 Kelly had a Harvey's coupon offering 2 hot dogs for $4.  Harvey's is located at the east end of Goderich in a large mall parking lot so lots of room.  Ate our dogs & Kelly popped into Zehr's Supermarket for a few things.  It's the only place I can get the natural peanut butter I like.  While Kelly was in the Supermarket I popped into a Dollar Store nearby to get a cinnamon scented candle for the rig.  I was surprised by what I saw walking back to the rig.  There was the Pheebs sitting right up on the dash where we had never seen her sit before.  What a rascal. 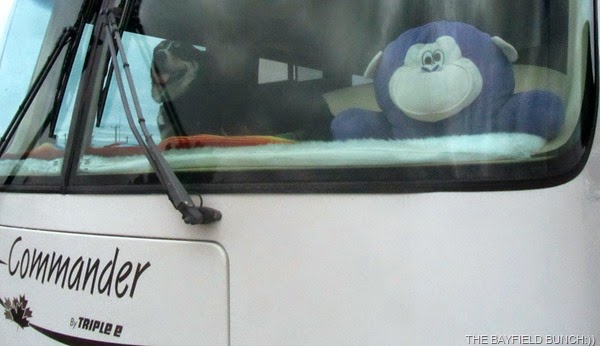 Moving to another area of the parking lot we stopped & Kelly slipped in & picked up a couple Tim Horton coffees for the drive home.  So nice to be out & going somewhere in the Big E even if it was only to Goderich & back.  And I’m sure loving these cooler 60 degree temperatures.  We are now only a couple weeks away from the time of year our weather patterns change so my fingers are crossed we will not have to endure any more of those muggy hot weather days this year. 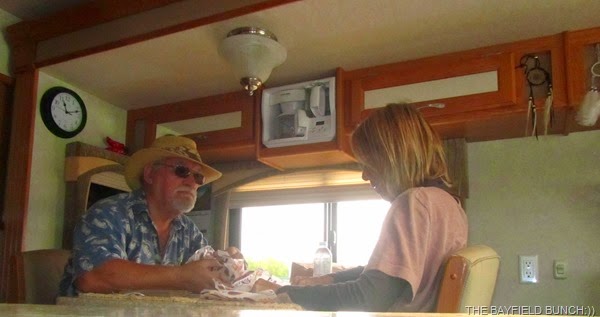 OTHER RV’ers PARKED THEIR RIGS NEARBY & HEADED INTO TIM HORTONS
After detecting some Skunk smells close by a few days ago we have determined a Skunk is living under our woodshed.  Found where he had dug himself in under the shed so I sent him an eviction notice with the garden hose.  However Skunks have been known to wear Scuba Suits so the water obviously did not phase him because I saw evidence of his comings & goings after I sent him that notice.  I have a small cage for catching pesky Squirrels but don’t think it’s big enough for a Skunk & for sure I would end getting myself sprayed if I tried to use it.  Shovelled some loose dirt over the hole & I will check later tonight see if the dirt is pushed back out which will tell me he is out for the night.  I will then lay in some heavy concrete slabs along the ground where the hole is.  Of course I already know all this will do is to have him move around to another side of the shed & dig in a new hole.  I have a feeling this is going to be a very tough eviction. 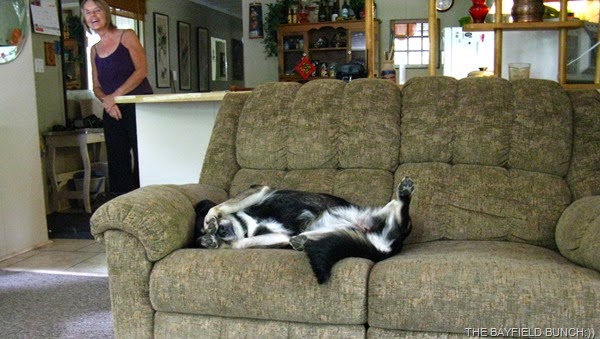 Thought Cheryl Ann at DEEP CANYON had an interesting follow-up post to her ‘School Memories’ post last week.  Some interesting comments as well. 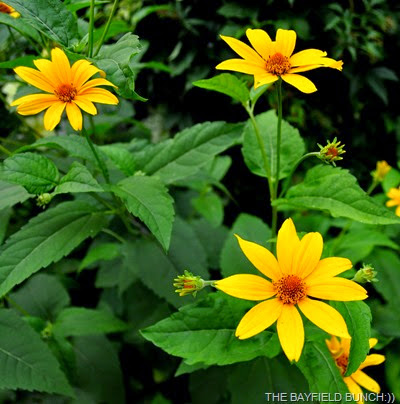 A little bit of travel talk on our walk this morning.  We are only days away from the month of August already & possibly only weeks away from heading south again.  Ok well I'm pushing it a bit but 8 weeks from now could maybe see us rolling out depending on the route we choose to take.  We hauled out the maps & had us another look at a more northerly cross Canada route.  Taking that route from Bayfield Ontario across the Prairies through Alberta & British Columbia then down through the States to Congress Arizona totals about 4,000 miles so we have pretty much decided not to do that.  That extra distance could easily add another thousand dollars to the gas bill.  Our thinking is this.......at some point we may not be able to travel to the States anymore because of health insurance costs etc.  If & when that happens we will then again take another look at travels within Canada.  And that includes Canada's east coast.  We feel it's more important to travel & spend as much winter Snow Bird time as we can in the South-Western States while we can.  Also at some point if gas prices keep getting too crazy we may have to shorten our travels one day & look for areas in maybe Georgia or Florida to hang out for the winter months.  We will cross those decisions when we get to them.  So for now we are looking to possibly go through Nebraska to South Dakota on our way to Utah where we intend to spend time before heading on down to Congress Arizona.  If we decide on that northerly Dakota route with South Dakota's BADLANDS NATIONAL PARK being our first destination I would like to head out of Bayfield around the end of September before bad weather settles into the Dakotas.  And that's only 8 weeks away.  Oh boy oh boy does this mean I can start loading up the rig in the morning.  That's 'almost' a Yahooie Louie.  Nothing like travel talks to lift my annual sagging Summer spirits:)) 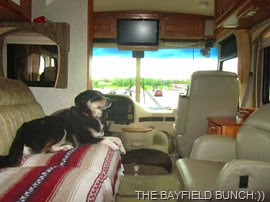 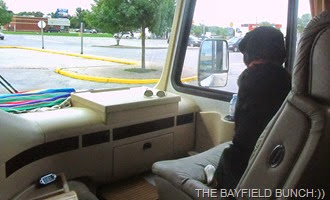 PATIENTLY WAITING & WATCHING FOR MOM TO GET BACK WITH THE HOT DOGS:)) 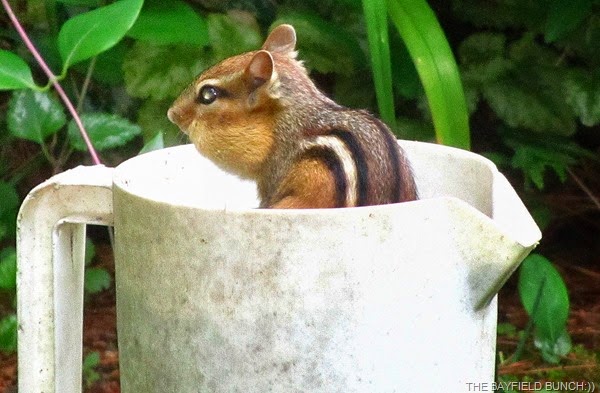 THIS LITTLE SCALLYWAG GOT INTO MY PITCHER OF BIRDSEED THIS MORNING WHILE I WAS LOOKING THE OTHER WAY & IT LOOKS LIKE HE’S ALREADY GOT A MOUTHFUL
GROANER'S CORNER:((   Overheard in a Social Security office: "I'd like to apply for Disability, please."  "What is your disability?"  "I'm having trouble with my eyes."  "What kind of eye trouble?"  "I can't see myself going to work."
---
One night, a lady stumbled into the police station with a black eye. She claimed she heard a noise in her back yard and went to investigate. The next thing she knew, she was hit in the eye and knocked out cold.  An officer was sent to her house to investigate, and he returned 1-1/2 hours later with a black eye.  "Did you get hit by the same person?" his captain asked.  "No," he replied. "I stepped on the same rake."