My energy levels were once again generated by cooler weather this morning.  58F works just fine for me when there are things to be done outside.  June is our lushest month for plant growth so there's no end to the trimming & weeding.  Hauled myself a utility trailer load to the dump this morning.  After our recent rainy conditions things were pretty muddy & the Jeep did a little slipping & sliding.  Of course that meant I had to again hose the Jeep down when I got back.  No problem though, I'm just happy to have something to do I enjoy doing:)) 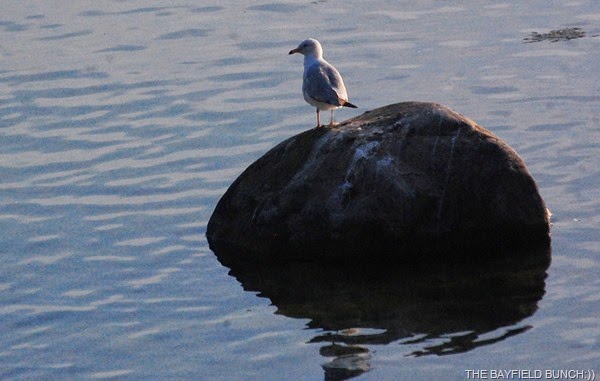 A reader recently left this comment saying, "Al, For the past several weeks, each day I log on to your site, as soon as it is loaded, a "sponsors" box fills the screen with a 30 second count down. I don't know if your aware of this and it's very annoying, so I wanted to let you know".........Thanks to the reader for that comment.  Always appreciate folks letting me know if there is anything amiss on my blogsite somewhere.  Not sure if anyone else has had this problem but Ed over there at the THE PEREGRINATING GRAYBEARD responded to reader Bob's comment with his own comment saying, "I think it is you. (meaning Bob) I don't see any "sponsors' box.  You have made Al aware of it but I don't think it is anything that he can fix"........... I am inclined to agree with Ed:)) 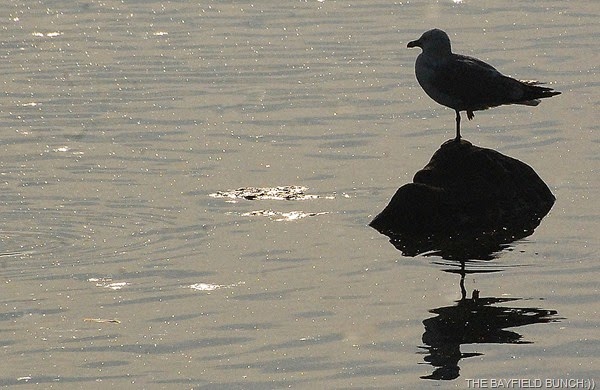 Well it was a decision I knew better than to argue with today.  Kelly decided late this afternoon that she was not comfortable with the decision to give up our Santa Fe.  She has always really liked this car & especially the convenience of it's large hatch-back cargo carrying capacity.  There were pros & cons of course but in the end it was Kelly's call & I agreed with her feelings about the deal.  Kelly called Fred & also cancelled the 2 safety inspections we had lined up.  There's no doubt the Sunbird was a good deal but I'm sure we will find another good deal when the right time comes along to look for another vehicle.  Actually we both have a preference towards another mini-van at some point in the future anyway.  And that's it for that.  Nothing like 'changes' to keep our aging adrenalin levels up to par eh..............:)) 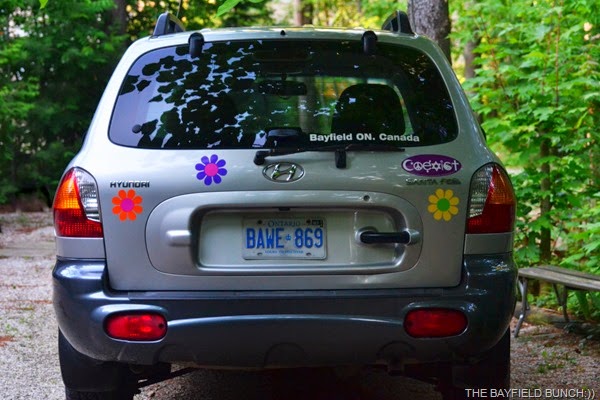 KELLY’S LITTLE HIPPY WAGON IS STAYING WITH US:))

I'm a little short on thoughts & day's activities tonight so I'll leave you with a story of an event which occurred back in October of 2008 entitled 'A Convert Operation Under The Cover Of Darkness'. 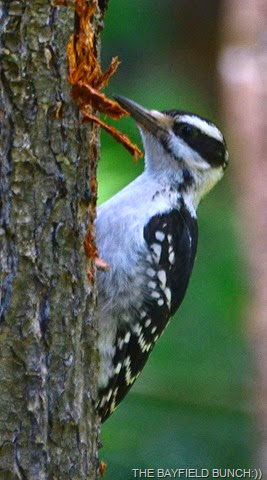 ARCHIVE MEMORY::  Under the cover of darkness I quietly moved my darkened van into position at the side of the street & shut off the motor. In the back were 3 large boxes containing 50 objects that had to be hastily deployed before drawing any attention from nearby houses. This was not an easy mission because 2 metal rods had to be affixed to each object & the holes for the rods did not match. The rods then had to be carefully pushed into the ground. But, there was no turning back. Two days earlier I had received a telephone call from a shadowy figure in Nova Scotia who was in need of help. She outlined her plan & said it was imperative that this mission be executed late Sunday night. She said, "this is your mission Al, can you handle it?" I ran it through my cranium & immediately thought, no this is not something I can do so I quickly said to her, "yes, I'm the right guy for the job!!" I code named the mission, ‘KayakAttack’ after the person who had called.  Sunday night arrived soon enough & I dispatched myself to the target area.  Moving swiftly it took me 27.6 minutes to deploy all objects one at a time being careful not to leave any metal rods lying on the ground. Didn't want anyone unnecessarily injured!! Turns out not all the rods had been shipped so I had to carefully place some of the objects in trees & shrubs. At one point I detected cigarette smoke in the air so quickly launched a night vision scan (I have excellent night vision) & immediately detected a dark figure standing beside a vehicle about two hundred yards away. I quietly deployed 2 more wire objects into the ground & re-scanned. The figure was gone. Someone down the street had just slipped outside for a smoke & then slipped back into their house. Minutes later I hooked the wires to the last object & strategically placed it near a darkened window. Within seconds I was back in the van & rolling with lights out. Minutes later I was home & silently slipped into the driveway. Well, not quite silently enough for our 3 super watch dog guys because they immediately sensed a driveway intrusion & let out an uproar which probably woke up every neighbor for about a mile around. So much for my super stealthy covert operation.......................... 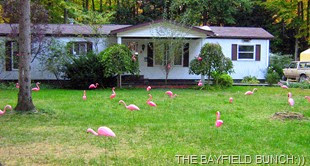 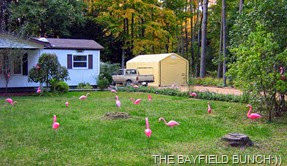 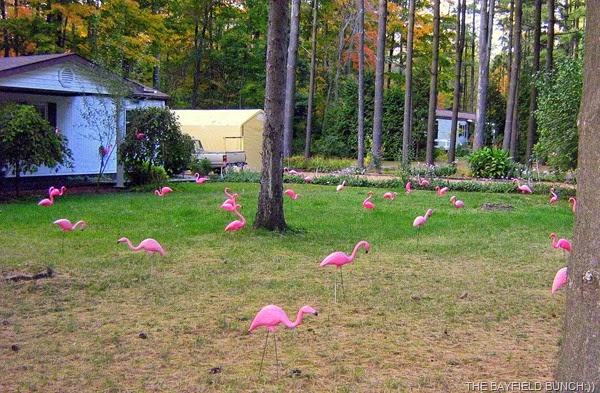 Now, here's the rest of the story:))
The phone call from Nova Scotia was from my friend Bruce's daughter Shannon. Bruce's Birthday was Monday & she wondered if I could pick up 50 pink Flamingos at a store in Goderich (Balloons To You) Saturday afternoon & put them all over Bruce's lawn late Sunday night. Of course that was my covert operation.  Kelly swung around that way this afternoon & took a few drive-by pictures of my shenanigans the night before. I would have gone over & took the pictures myself but I didn't want Bruce chasing me down the street shouting loud obscenities & throwing pink Flamingos at me. Could have been most embarrassing seeing two old guys hobbling down the road under duress with pink Flamingos flying through the air!! 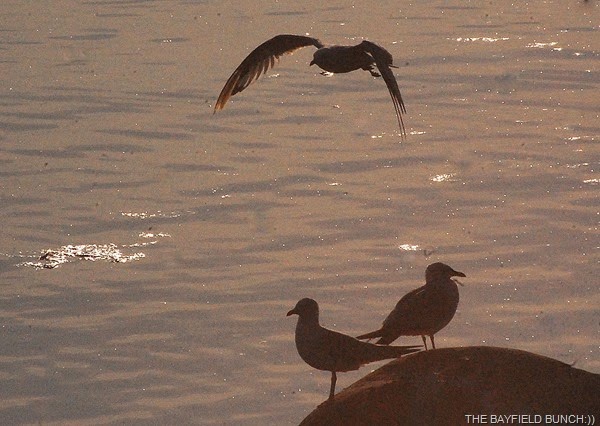 GROANER'S CORNER:(( The Chaplain had been assigned to the ship and he noticed how much grief the cooks caught from the crew and how they gave back as much as they got. He talked to the Food Service Officer and decided to talk to the cooks and get them to be more cheerful when they served the meals to the sailors coming down the line.  "A smile, a cheerful comment, and a willingness to serve, will all reap great benefits," he told them.  After his pep talk the Food Service Officer and the Chaplain stood back and watched the food being served.  A new sailor aboard walked down the line but he didn't like anything he saw so he just carried his tray down the line till he got to the desert section. He picked up a saucer containing a large piece of chocolate cake.  The head cook looked at him, "Is that all you're gonna eat," he asked.  The sailor said, "Yeah, the rest of it don't look too appetizing."  The cook smiled and said, "Well, in that case would you like two pieces of cake?"  The Chaplain smiled and nudged the Food Service Officer in the ribs, "I told you my talk did them some good."   The kid said, "Yeah, man, I'd appreciate it."  The cook leaned over and cut the piece of cake on the tray in half.