A CHANGE OF PLANS FOR AL’S BIG POLISHING & WAXING PROJECT 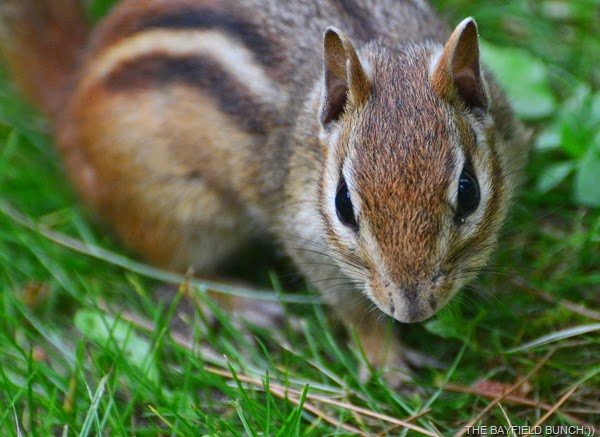 Thunder & lightning in the night knocked our power off just long enough for us to re-set all the clocks & outside light timers this morning for about the dozenth time since arriving home in early April.  With everything dripping wet & threatening clouds overhead we did forego our morning walk. 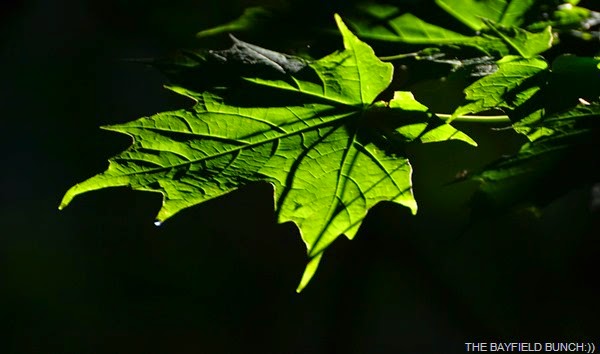 First order of business for me was to wash/wax the Santa Fe.  Had a bucket of waxy water left over from doing the Jeep Sunday so rather than waste the wax & water mix I did the Santa Fe.  Looks good. 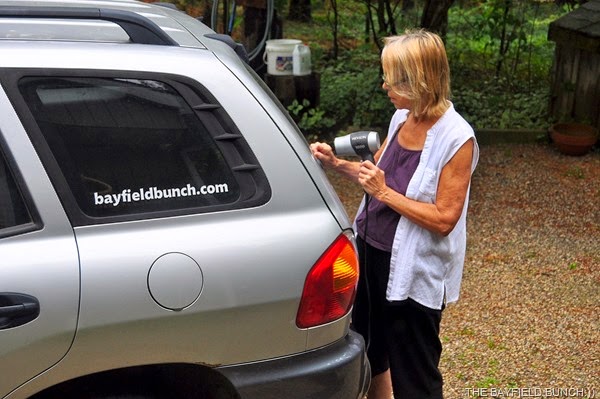 REMOVING SOME LETTERING & DECALS OFF THE SANTA FE WITH HOT AIR FROM A HAIR DRYER THIS MORNING
My change of plans for the rig's big polishing & waxing project began with a few phone calls this morning.  Kelly called Home Hardware & Napa in Goderich to see if they had the Meguiar's products needed to get started on the Big EEE's exterior finish.  Home Hardware didn't have what I needed but the lady suggested we check out the Bayfield Marina.  We have lived in Bayfield now for nearly 12 years but had never been in the Bayfield Marina.  In fact neither one of us were exactly sure where it was.  You can tell we are not boat people.  Kelly phoned them & they had the MEGUIAR'S  products I figured I needed.  Although we had driven by the Marina store many times we had just never taken notice of it.  What a surprise a half hour later to walk in the door of an older building near the dock into a big bright well lit & well stocked showroom.  Lots of Meguiar's products along with other brands as well.  They do a lot of boat repairs & refinishing at the Bayfield Marina as well.  Did you know 3M actually bought & now owns Meguiar’s. 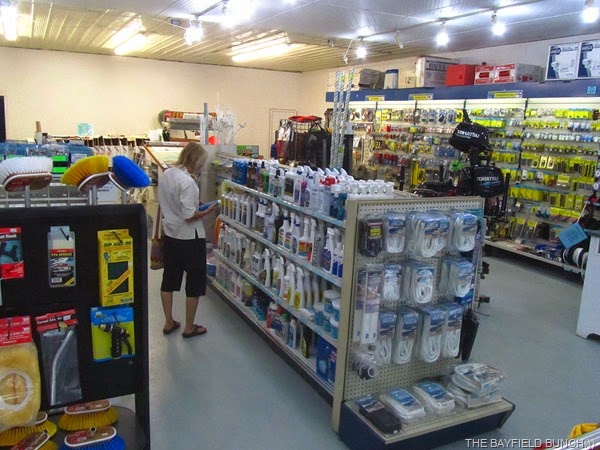 Ron, an employee at the Marina was very helpful answering all our questions about preparing & waxing faded fiberglass etc.  Kelly hasn't been to keen on me tackling this big job & of course I have been leery of it as well.  Ladders, buffers, inexperience etc.  Kelly casually asked Ron if he knew anyone in the area who did this kind of work professionally & amazingly enough he did & gave us a fellow's card in Hensall Ontario that does detailing for boats, RV's, etc.  Hensall is only a 25 minute from Bayfield.  Kelly phoned & a short time later Pheebs & I arrived at DETAILERS' with the Big EEE & Kelly right behind us in the Jeep.  We took the Jeep in case the estimate was affordable enough for us & we could leave the Motorhome there.  And that is exactly what happened.  Incidentally the owner of DETAILERS, Jerry Smith has this motto on his business card which reads, ‘If It Rolls, Floats Or Flies We Clean It’. 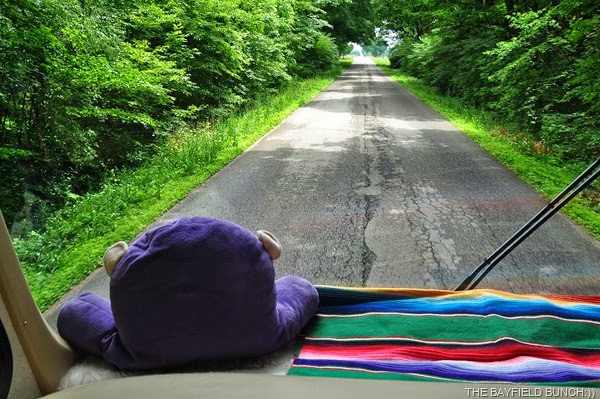 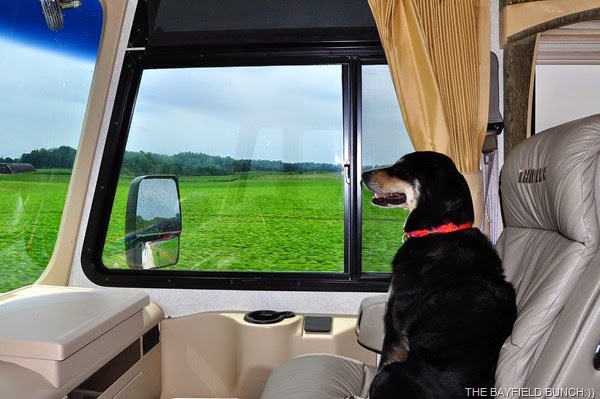 We liked Jerry Smith the owner of Detailers & felt confidant we made the right decision to have this big job professionally done.   I will let you in on the price & 3 stage process he uses when we pick the coach up later this week.  They also use Meguiar's products exclusively here.  We were back home by 2:30 & that pretty well wraps up our day.  Oh, & we can now take back the heavy Simonize 8 inch heavy duty buffer/polisher machine I had bought at Canadian Tire Sunday morning.  Never even took it out of the box.  I am so glad I do not have to try & use that thing.   Machines & I do not have a good track record of getting along well with each other. And I'm so glad I do not have to try & haul that heavy polisher up a shaky ladder & teeter in the air trying to buff & polish something.  At least this way & in this case I know the job will be done right by someone who knows how to do it properly.  For sure they will do a much better job of this than I ever could have hanging onto a tall stepladder.  After this detailing of the exterior all I have to worry about from now on is yearly maintenance with easier to use spray on washes & waxes etc.  Phewwwwww, feel like I just dodged a big nasty bullet in not having to try & do this job myself:)) 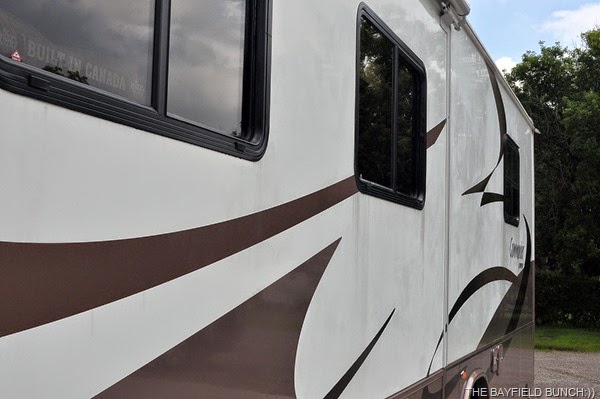 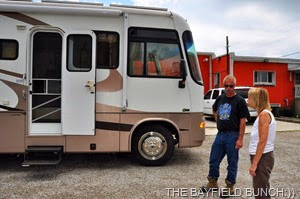 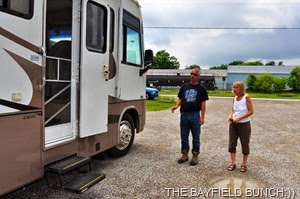 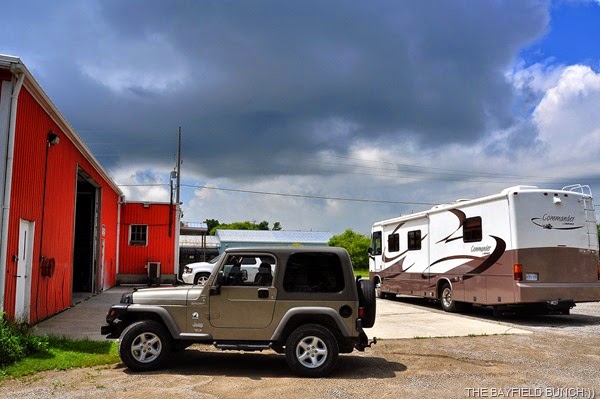 HOPEFULLY THE NEXT TIME WE SEE THE RIG OUR DULL OXIDATION PROBLEM WILL BE SOLVED & WE WILL HAVE A NICE SHINY COACH:))
GROANER'S CORNER:((  I failed a Health and Safety course at the Senior Center today.
One of the questions was: "In the event of a fire, what steps would you take?"  Apparently, "Great Big Ones" was the wrong answer.
---
A new hair salon opened up for business right across the street from the old established hair cutters' place. They put up a big bold sign which read:
"WE GIVE SEVEN DOLLAR HAIR CUTS!"
Not to be outdone, the old Master Barber put up his own sign:
"WE FIX SEVEN DOLLAR HAIR CUTS"