TODAY WE MET THE MOST DELIGHTFUL COUPLE:)) 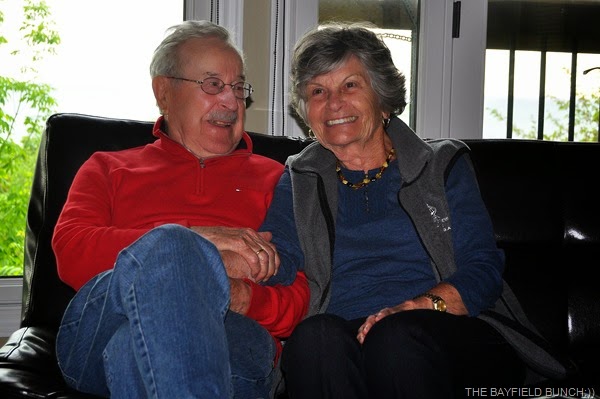 Looks like we will probably have the big wheels rolling Thursday morning rain or shine.  My reason for preferably wanting to go on a clear day was simply to avoid another big Motorhome road grime clean-up.  Call me lazy if you will.  Driving in rain is no bother.  Done enough of that over the years for sure.  Ice, snow, freezing rains, high winds, fog, yep done em all.  Our first year out with a truck & fifth wheel saw us iced up so bad coming home through Michigan that I had to get a propane torch to un-thaw & free up the hitch assembly when we got home in order to unhook the fifth wheel. 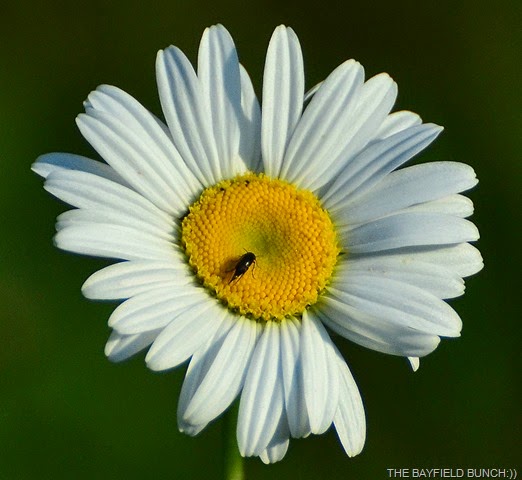 If we had left Saturday we would have had to be at the border early.  That's the key for beating the week-end cross border shoppers.  When heading south in the Fall we always leave early on a Saturday morning & there is hardly ever any wait time at the border.  Saturday & Sundays are the best travel days simply because there are no morning & afternoon rush hours.  Anytime we have to do a city or a heavy traffic area we find it is always best between the hours of 9 in the morning & 3 in the afternoon.  Before & after those hours can be chaotic. 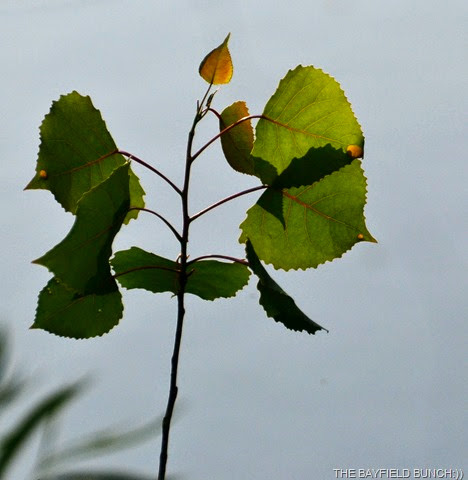 I haven't made a decision yet on how to proceed with trying to restore the coaches finish to a nice white shiny & lustrous sheen......if that is even possible for me to do.  Lots of helpful ideas & products out there so it's hard to know which is easiest & best to use.  I did read about one product having about half a dozen stages to it.  That would definitely not be for me.  Wished we could take it somewhere & have it professionally done but I'm sure the cost would be too prohibitive.  I'm afraid both the Sunseeker & Winnebago spoiled me with their super shiny gelcoats.  After all my talk about not liking shiny-shiny here I am trying to figure out how to get our new to us rig all shiny-shiny.  You know, there just doesn't seem to be a whole lot of logic to my shaky reasoning sometimes:)) 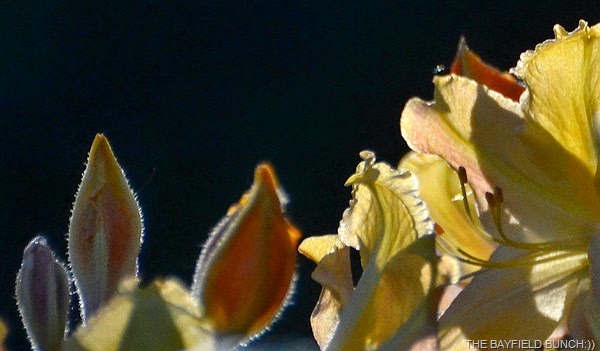 Late this afternoon we met the most delightful couple & it began with two unexpected phone calls.  The second phone call came this afternoon from Kirsten, owner of DEER PARK LODGE.   The first phone call came on the evening of March 4th 2013 well over 2,000 miles away in California.  But the phone call was not on our phone nor was it to us or for us.  We were boondocked at the Clark Dry Lake Bed near Borrego Springs.  Kelly, Pheebs & I were out scrounging around near the rig for a bit of campfire wood.  A truck camper had pulled in not too far away from us.   While carrying a chunk of firewood back I noticed a lady with a cell phone to her ear angling across the desert in my direction.  And our paths were about to cross.  Now rather than tell you all over again what took place I will just give you this link to the post I wrote today about that encounter.  RETURN TO THE 60 FOOT SNAKE  Scroll down towards the bottom of my post & pick up the paragraph beginning, 'I'm sure many RV'ers are familiar with the many coincidences’. 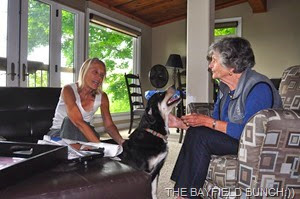 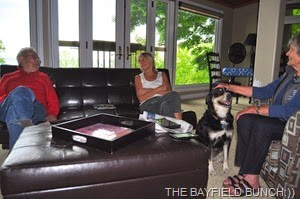 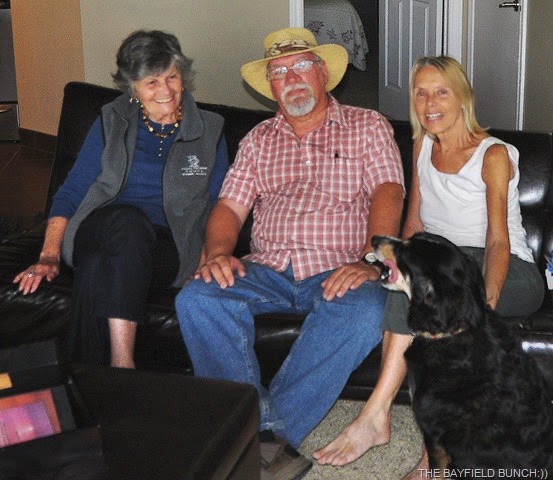 I’M THE WALRUS IN THE CENTER WITH THE HAT ON

Now if you read my linked post about the lady walking towards me with the cell phone I can tell you that this evening we met that ladies Mother who happened to be on the other end of the cell phone that evening.  And that brings me back to Kirstens phone call this afternoon.  A couple had checked into Deer Park Lodge & asked Kirsten if she knew Kelly & AL from the Bayfield Bunch.  Their names were Rita & Herman & they told Kirsten about their daughter Esther meeting us in Borrego Springs.  Kirsten thoughtfully phoned us right away.  Took me a few minutes to make my way through the many cobwebs surrounding the door leading to my mind’s memory department but I did recall the encounter in the desert with a cell phone carrying lady.  And I did remember talking to this ladies Mother in Ottawa Ontario.  Hmmm, could it be?? 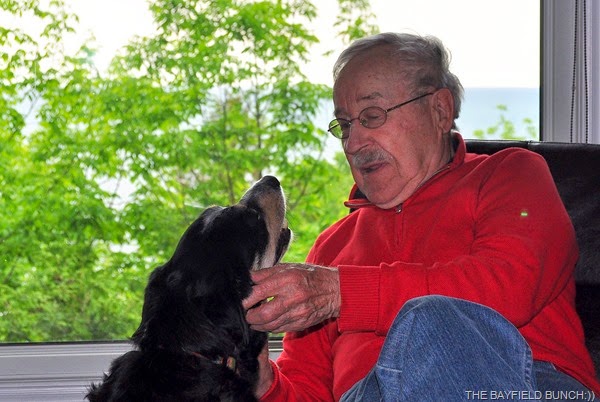 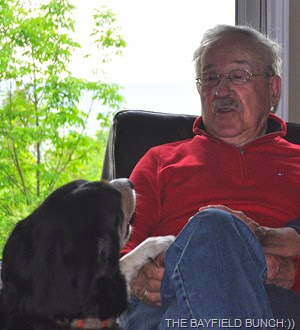 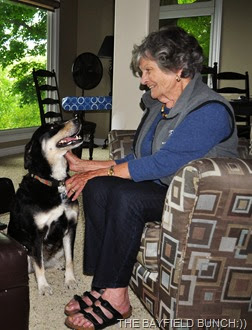 After supper Kelly, Pheebs & I drove over to Deer Park & located which unit this as yet mysterious couple were staying.  A nice white PLEASURE-WAY RV parked outside.  Yes this must be them.  Kirsten had put them in what is commonly referred to as the Penthouse.  Nicest spot at Deer Park with the best second story view out over Lake Huron.  Up the steps we went & knocked on the door. 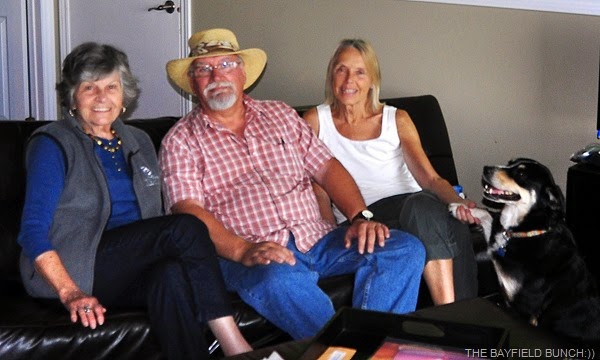 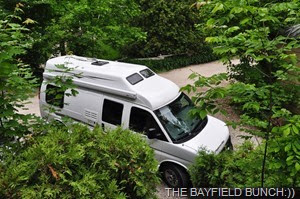 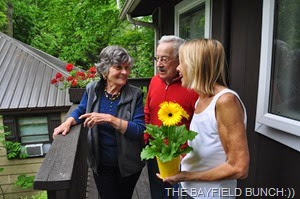 And yes indeed it was the very same lady I had spoke to on the cell phone while walking in the desert just outside of Borrego Springs California back in March of 2013.  Rita & her husband Herman were on a final cross country RV trip & had decided to slip into Bayfield.  What a charming couple.  RV'ers for many years they reminisced about how they once traveled in larger Class A Motorhomes but over the years have downsized to several Class B vans.  Herman doesn't drive anymore so the smaller van is much easier for Rita to handle.  She wasn't too keen on driving their former 38' diesel pushing Newmar.  They liked Pheebs & Pheebs like them just as we did.  They invited us out for supper tomorrow night so we will head for a Bayfield eatery called THE DOCKS.  What a pleasant coincidence this all was & how nice to meet these folks.  A big hello from the Bayfield Bunch to Rita’s Sister Irmgard (hope I spelled that right) & of course Esther & Steve.  And Herman, here’s that ‘Beer Groaner’ I was telling you about………………………:)) 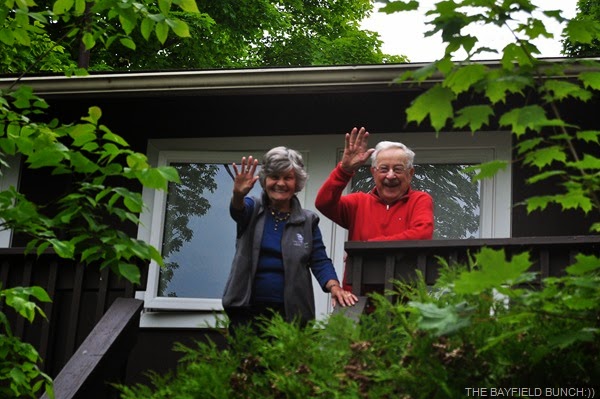 SEE YOU TOMORROW:))
GROANER'S CORNER:(( And here's some Beer trivia for ya::  It was the accepted practice in Babylonia 4,000 years ago that for a month after the wedding, the bride's father would supply his son-in-law with all the mead he could drink. Mead is a honey beer, and because their calendar was lunar based, this period was called the "honey month" or what we know today as the "honeymoon".

---
Before thermometers were invented, brewers would dip a thumb or finger into the mix to find the right temperature for adding yeast. Too cold, and the yeast wouldn't grow. Too hot, and the yeast would die. This thumb in the beer is where we get the phrase "rule of thumb".

---
In English pubs, ale is ordered by pints and quarts. So in old England, when customers got unruly, the bartender would yell at them to mind their own pints and quarts and settle down. It's where we get the phrase "mind your P's and Q's".

---
After consuming a bucket or two of vibrant brew they called aul, or ale, the Vikings would head fearlessly into battle often without armor or even shirts. In fact, the term "berserk" means "bear shirt" in Norse, and eventually took on the meaning of their wild battles.
---

In 1740 Admiral Vernon of the British fleet decided to water down the navy's rum. Needless to say, the sailors weren't too pleased and called Admiral Vernon, Old Grog, after the stiff wool grogram coats he wore. The term "grog" soon began to mean the watered down drink itself. When you were drunk on this grog, you were "groggy", a word still in use today.
---

Many years ago in England, pub frequenters had a whistle baked into the rim or handle of their ceramic cups.When they needed a refill, they used the whistle to get some service. "Wet your whistle", is the phrase inspired by this practice.