TODAY WAS A NO BRAINER……STAY INSIDE & STAY COOL 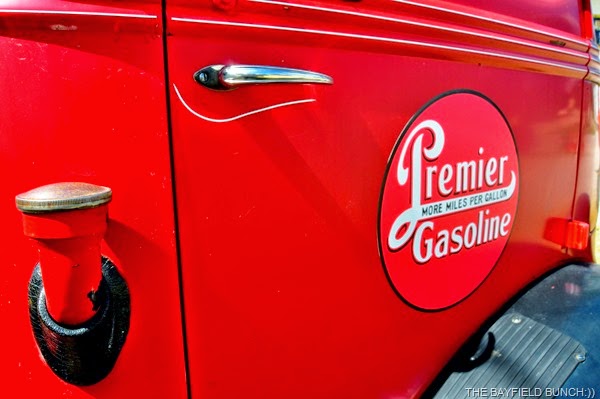 Update on Kelly's sister Becky.  She is home from the hospital.  It seems the strong pain medicine Becky was on for her knee interacted with the heart medicine she was taking causing heart attack like symptoms.  Cardiologist said Becky is not to return to work until after her knee surgery on July 26th.  Doctor's said no damage was done to Becky's heart & she should be Okay:))

Weather people had predicted a hot & humid day today & they were sure right.  Turns out May was the hottest May on record & I think June might be a close second.   We didn't do our morning walk because it was already humid at 8 a.m. & that meant the mosquitoes & biting flies would be out in full force.  Concentrated my efforts on the second clean up & re-organizing of our wooden shed.  A Mother Robin has a nest only feet away from where I was working & has become very trusting of me walking by.  We also have a noisy nest of baby Wrens in one of our old birdhouses as well.  Those little birds can sure send up a squawk.  But it wasn't the noisy birds that soon chased me back into the house.....it was the heat & humidity. 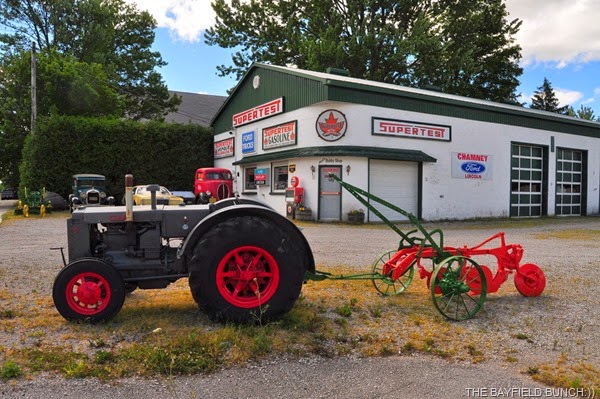 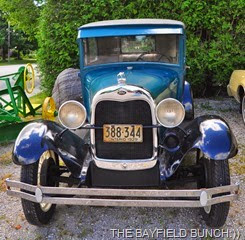 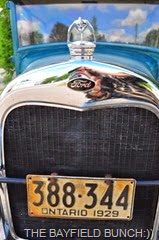 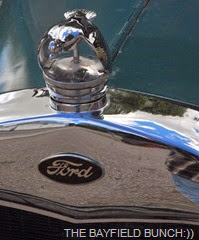 Kelly was off to Goderich running errands early this morning because with no A/C in the Santa Fe it gets pretty uncomfortable.  I am of the belief that our summers are getting hotter & our humidity levels are higher & longer lasting than years ago.  I base that on summer memories from the past 60+ years.  Weather changes are particularly more noticeable in the Northern hemisphere where weather changes can be readily seen & felt with the continuous clashes of warm, hot, cool, & cold air.  Far more frequently volatile than in the dryer South-West. 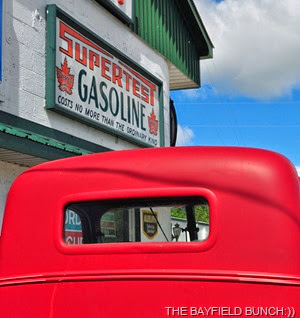 In Thursday's post I referred to the building where Fred kept his Motorhome as a 'driving shed'.  Driving or Drive shed is a common term on farms.  Generally large oversized garage type buildings used for parking farm machinery such as tractors, combines, trucks, wagons, & just about anything farmers can drive or fit into the big sheds.  Some are open sided while others are complete buildings with large doors.  On rainy days farmers can work on their machinery in their driving shed.  Barns are for straw, cattle, chickens, horses & hay while dog houses are of course for dogs & errant husbands. 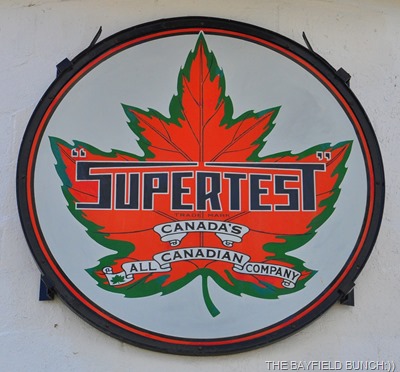 ARCHIVE MEMORIES::  Late November of 2008 found us traveling through the State of Kansas when the following happened...............Up about 5:30 a.m. hooked up the car, said good-bye to our scenic Pawnee campsite & we were on the road heading west on I-80 by 6:30. The buffeting Kansas winds were hitting us nearly head on from the northwest so we quickly pulled into a rest area & I tied some rope around the awning arms just in case. (turns out it was a good thing we did that) Turned off I-80 onto highway # 81 heading south for Kansas. This was a great 4 lane highway with hardly any traffic on it & was the nicest drive we had since leaving home. Very relaxing in a gently rolling countryside & a beautiful sunrise to boot. Because the big winds were behind us I figure we must have been getting about 351.2 miles to the gallon:)) At Salina, Kansas we picked up I-70 heading west for Colorado Springs & it immediately became apparent the winds had greatly increased & were now hitting us broadside!! Felt like we were on a midway ride at times as the wind gusts had their way with us. Made for some mighty exciting driving to say the least. We had only gone about 10 miles when we heard a "pop" sound like a parachute opening somewhere behind us. Kelly right away looked back out her window & hollered, "stop, stop!!!!" Quickly got the rig off onto the narrow shoulder out of the way of the huge trucks coming up behind us. Our worst fears had materialized.....about a third of the awning had been pulled out & was flapping fiercely over the top of the motorhome. 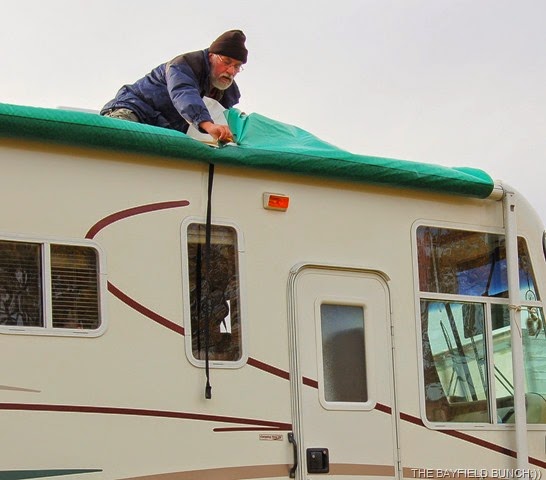 Quickly got our ladder & some rope out & went up the side but could not get the rope around anything because the wind had the awning totally out of control. Climbed up the ladder on the back of the rig & got myself onto the roof but didn't dare stand up because the wind was just ripping across there. Glanced to the northwest & could swear I saw Dorothy & Toto go flying by. Kelly came up the ladder at the side of the motorhome & between the two of us we were able to get some rope around one end of the awning but it was futile gesture. The awning was already ripped & I was afraid the wind gusts would pull more of it out at any second & blow me off the roof onto the dual lanes of I-70. Lots of big trucks going by causing a secondary whoosh of air complicating things as well. 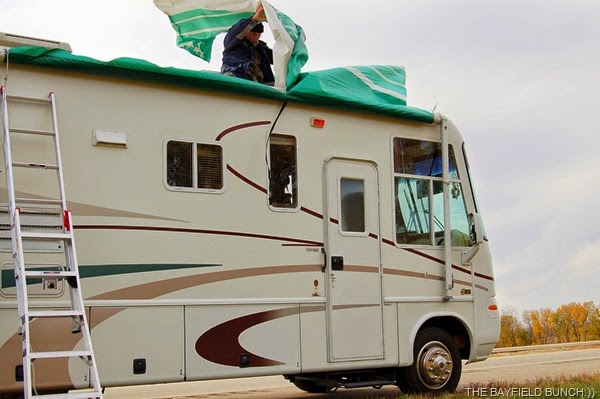 Kelly got me a knife & I proceeded to cut the whipping awning off. The wind was cold as well & only an hour before we had stopped at a Wal-Mart for some groceries & I had picked myself up a winter toque. (warm winter hat) That was a lucky break for me. I had taken a length of rope up onto the roof so I cut short 15 inch pieces & worked my way along the awning securing what was left with about a dozen pieces of rope. Kelly grabbed a camera in the meantime & took a few pictures. What a relief it was to get the last piece of rope tied into place. My fingers were froze.  Carefully lowered the big chunk of awning down to Kelly & she crumpled it into the back of the car for later disposal somewhere. Didn't want it blowing out across the freeway onto somebody's windshield. 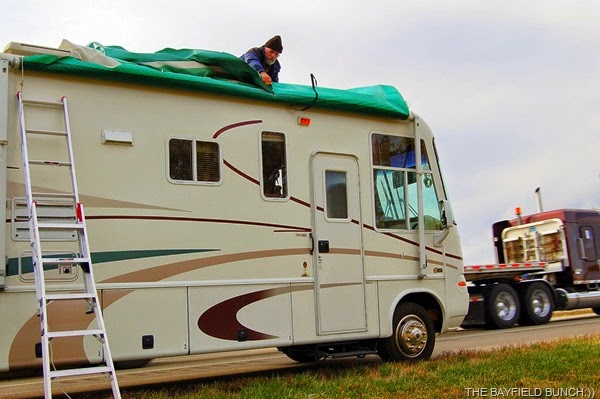 Finally got down off the roof & back inside to the warmth of the motorhome. Whewwwwww!! We'll see about getting a new awning when we get to Quartzite, Arizona later in January. (we did get a new awning in Quartzsite later) All & all we were very fortunate because had we not heard the "pop" of the awning opening & not got pulled over so fast, the wind would have quickly pulled out the rest of the awning which in turn would have acted like a fully inflated parachute & ripped the awning arms right off the motorhome causing damage to the coach itself. We never did open that awning since the day we had bought the motorhome back in the spring so what caused it to open like that, we have no idea. Glad we weren't pulling the fifth wheel because we never would have heard the awning go & would never have got pulled over right away. Also, on the fifth wheel we had last year there was no ladder to get onto the roof so we would have been in a big heap more trouble for sure 10-4!!  We made it to Ellis Kansas that day & spent Halloween Night in a quiet little county park beside a relaxing river.  What a day it had been.......................... 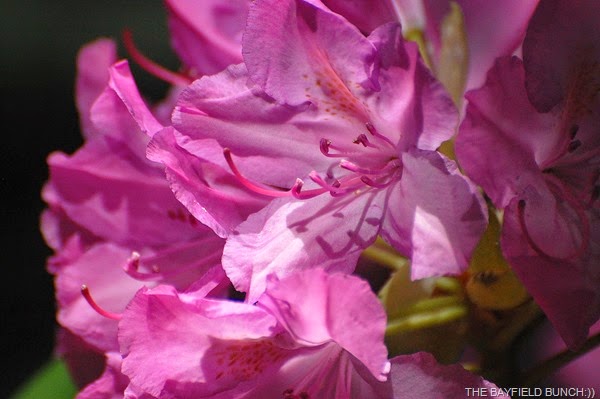 GROANER'S CORNER:((  After years of scrimping and saving, a husband told his wife the good news: "Honey, we've finally saved enough money to buy what we started saving for in 1979."  "You mean a brand-new Cadillac?" she asked eagerly.  "No," said the husband, "a 1979 Cadillac."

Two sea monsters were swimming around in the ocean, looking for something to do. They came up underneath a ship that was hauling potatoes. Bob, the first sea monster, swam underneath the ship, tipped it over and ate everything on the ship.  A little while later, they came up to another ship, again hauling potatoes. Bob again capsizes the ship and eats everything onboard.  The third ship they found was also hauling potatoes and Bob once again capsized it and ate everything.  Finally his buddy Bill asked him, "Why do you keep tipping over those ships full of potatoes and eating everything on board?"  Bob replied, "I wish I hadn't, but I just can't help myself once I start. Everyone knows you can't eat just one potato ship."