SCAMPERING AROUND THE BACK ROADS OF THE BRUCE

(Kelly worked a little magic on her Blackberry today & our internet signal improved so I will try publishing tonight’s post with it.  If it doesn’t work I will post the blog sometime hopefully Thursday morning.  This is Wednesdays post)  This is coming to you from the back of the Jeep in front of the Tobermory Public Library Thursday June 5th at 10:40 a.m. 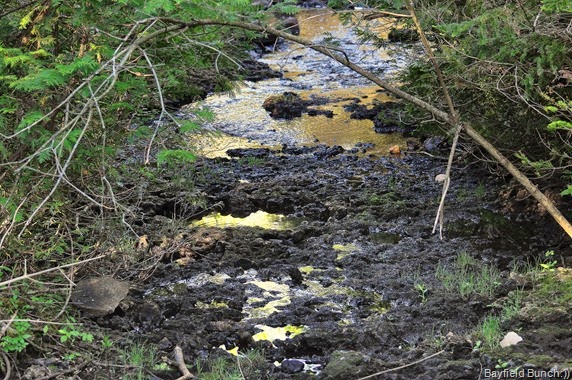 First night in the rig went very well.  No problem to easily make the couch into the most comfortable RV bed we have ever had.  Using the same piece of quality foam I had in the Winnie I unrolled it on the bed & slept like a log.  Pheebs curled up in the leather tub chair but was beside me when I woke up.  Didn’t have to put the furnace on till this morning for a bit to take the chill off.  How nice to open our curtains & see a great big view going on outside.  Sunlight tickling the tops of Island trees a couple miles out in Myles Bay to the West.  Clear skies overhead with Seagulls swooping low over the water’s edge out over the lake.  A mighty fine way to start another day. 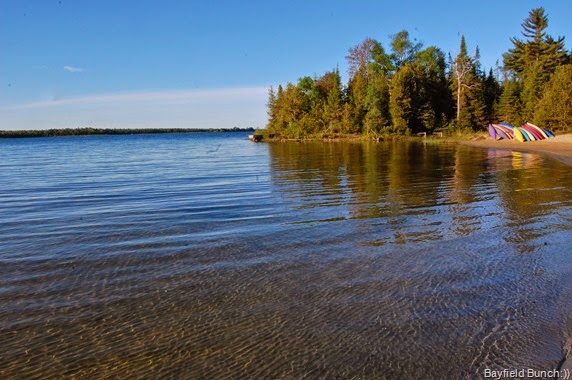 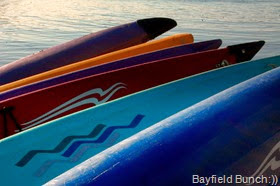 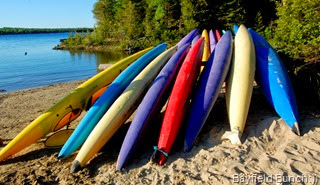 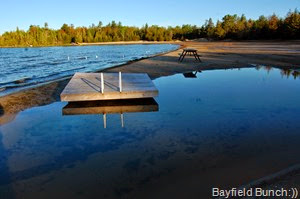 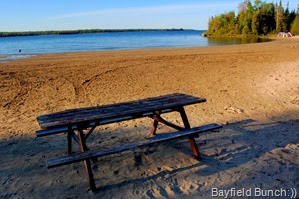 MORNING WALK ALONG THE BEACH

The Celtic camp bus driver had told us where to find a Beaver dam on one of the woodsy trails through the thick forest behind the beach.  We set off on our morning walk to find it.  How nice to be hiking along on a new trail.  Forest was thick with Cedar trees but the trail was in good shape.  We walked maybe a mile but did not find the Beaver’s lodge.  Found a nice inland lake but no Beavers.  Many birds in the trees & out of a dozen or so sounds I only recognized maybe 3 of them.  We are in the land of Loons & I did think I heard a faint weeble out on one of the nearby inland lakes. 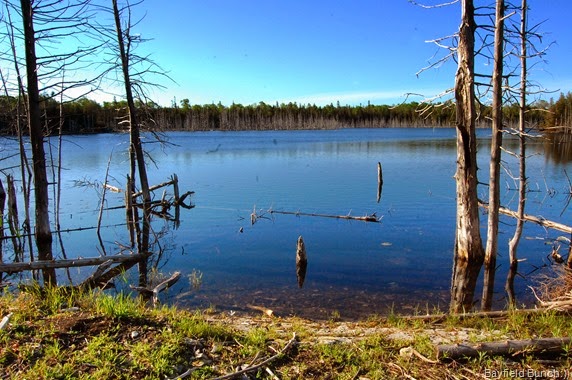 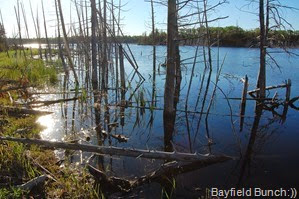 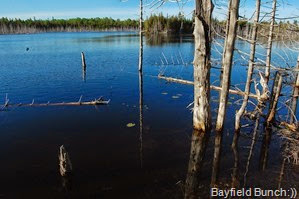 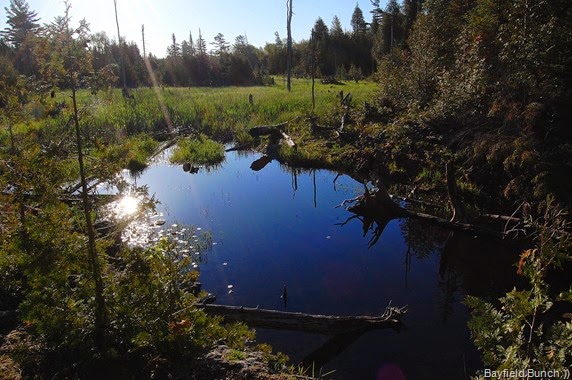 Why I did not end up with 2 very smashed Nikon cameras & lenses this morning I have no idea.  Just an unusual piece of luck.  It all started while loading the Jeep for a day trip around the area.  Tried carrying too much out to the Jeep at once.  Jeep was locked so set my 2 camera’s on the passenger side of the Jeeps hood.  Put the sack of egg salad sandwiches, maps, magnifying glass & my laptop computer in the Jeep, went back & locked the rig.  Ooops forgot my sunglasses which were in the coach but now we had a problem.  I could not get the rig’s door unlocked.  Kelly tried, I tried again but the key we had used to lock the rig while on our morning walk would not open the door.  Now we were locked out of our mobile house!!  Thinking of how to get into the rig I remembered I had left a living room window open.  I’ll just have to get a ladder out of the bin, climb up & punch a hole through the screen.  I was walking around the front of the rig to see how high up the window screen was when I walked past the driver’s door.  Driver’s door!!  Aha, a light bulb moment.  I did have a key for the drivers door on the rig’s key ring.  Presto, I unlocked the drivers door & crawled up inside to unlock the side door.  Oh thank heavens for that driver’s door.  A driver’s door was one of the things I was wanting when we were looking for another rig & this morning it paid off. 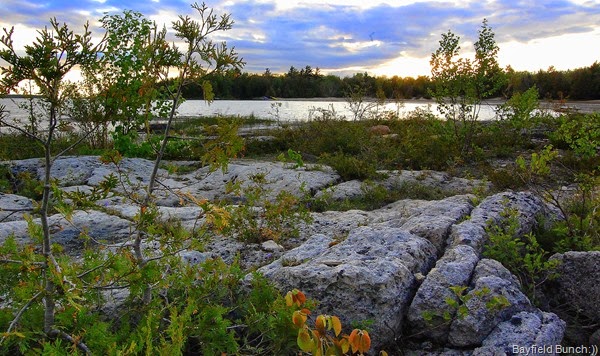 We decided to deal with the locking door problem when we returned so we jumped in the Jeep & off we went.  Have I forgot about anything??  Hmmmmmm.  Traveled about half a mile on a gently twisting gravel road to the highway.  Made a left turn & accelerated north up Stokes Bay road heading into Stokes Bay.  Had gone about half a mile when something caught my eye fluttering up by the windshield wiper on the passenger side of the Jeep.  We both saw it at the same time.  Holy Crap there were both my cameras still clinging to the hood of the Jeep.  First impulse was to get on the brakes but luckily I didn’t follow that impulse.  Braking would have slid the cameras forward on the hood, over the edge & down on the road where I would have promptly driven over them.  Very slowly slowed down to a gradual stop right on the highway expecting the cameras to disappear any second off the edge of the hood.  Kelly quickly jumped out & retrieved both Nikons.  Just an absolute sheer piece of luck both those cameras hadn’t slid off the hood when I made the left turn onto the highway.  Good thing I didn’t have that hood waxed to a slippery high sheen.  Talk about a mixed bag of feelings.  Sooooo mad at myself for making such a stupid mistake yet so happy & relieved my cameras were not lying on the road all broke to pieces.  Nearly lost one of my cameras about 4 years ago the same way but vowed at that time to never set a camera on a vehicle again.  Well there ya go………………………

Our Blackberry internet is too weak for me to post my blog so we drove into the town of LION'S HEAD looking for a Wifi spot like maybe a Library.  Spotted RACHEL'S BAKERY & CAFE with Wifi right on main street so in we went.  Fired up our laptops & connected.  Each grabbed a coffee & split a Blueberry muffin.  Minutes later I was able to publish Tuesday’s post.  A little drive around the town of Lions Head & down around the harbor & marina.  Lions Head is probably the biggest small town on the Peninsula.  Many quaint & artsy homes & the town has a nice Mayberry feel to it.  Hopefully over the summer we will spend more time in the area & I can show you more of what this rustic & folksy area has to offer.  Hope Bay, Cape Chin, Dyers Bay, Cape Crocker, Colpoys Bay & the list goes on. 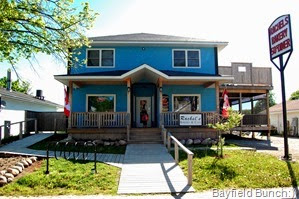 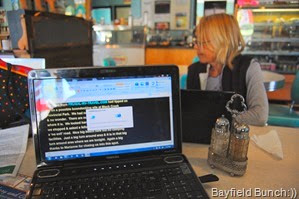 With map in hand plus a bunch of written notes we headed off on a bunch of winding twisty back roads snaking our way through heavy forests of Cedars, Pines, & hardwood trees.  We were curious to see what small properties were selling for on the Bruce.  Properties, not houses.  Looking for & finding properties for sale is a bit like Geocaching.  Directions off real-estate sites on the internet can be a challenge sometimes so it is always kind of fun trying to find what it is one is looking for.  We did manage to locate 6 out of 8 props.  Nothing of interest but we sure did get ourselves around a lot of scenic back roads. 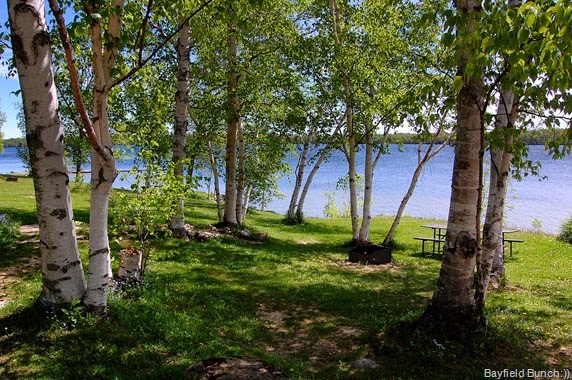 We were back to the rig by 1 p.m. & sorted out the locked door problem.  Just had to do with a mix-up in keys but that’s what shake down cruises are for……getting the bugs worked out & getting comfortable with our new to us rig:)) 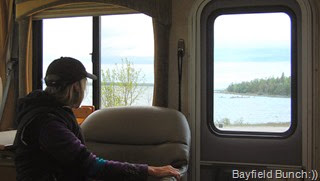 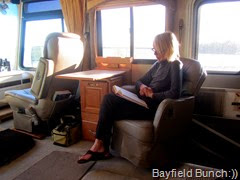 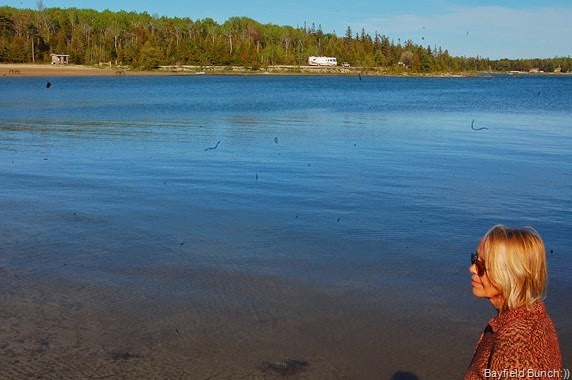 YEP THAT’S OUR RIG ACROSS THE BAY

We plan to Jeep ourselves up around the TOBERMORY area in the morning.  We will maybe drop into CYPRESS LAKE NATIONAL PARK as well.  We have camped here before but it was many years ago.  It was also at Cypress Lake back about 1991 when I was with a photo group in my Dodge camper van that 2 Bears rocked my rig as they hastily made their way through my campsite after destroying a fellow photo students tent looking for food.  I think I wrote a post about that a few years back.

We again spent our afternoon in relax mode just taking in all the beauty Mother Nature was again sending our way.  An early evening stroll along the beach with placid waters lapping at our feet rounded off another great day in another great way. 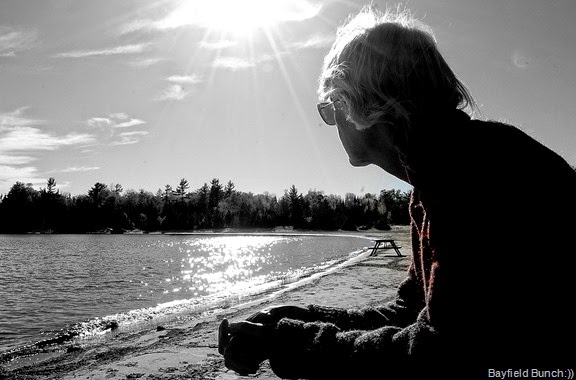 GROANER’S CORNER:((  Bill and Doug went into a diner that looked as though it had seen better days. As they slid in a booth, Bill wiped some crumbs from the seat. Then he took a napkin and wiped some moisture from the table.
The waitress came over and asked if they wanted some menus.  "No thanks," said Doug. "I'll just have a cup of black coffee."  "I'll have black coffee too," Bill said. "And please make sure the cup is clean."  The waitress shot him a nasty look. She turned and marched off into the kitchen. Two minutes later, she was back.  "Two cups of black coffee," she announced. "Which one of you wanted the clean cup?"