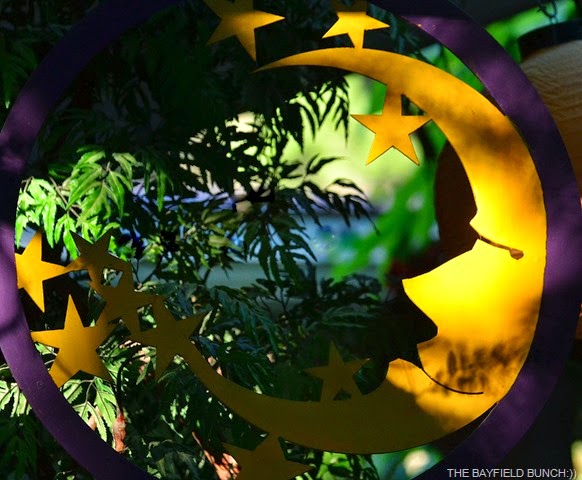 On the way home from Arizona this past April we kinda half decided not to get ourselves into our usual summer 'Real Estate' mode.  Agreed where we live now is pretty darn nice so why look for another place although we would like to have a house on our own piece of property.  Where we are now we own our unit but not the land & we pay a monthly lease payment.  Been making those payments for nearly 12 years now.  Kelly's been checking out some places on her real estate site again & we've been out looking around at a few prospects.  Of course prices are always too high for us but one never knows if there's a deal out there somewhere if one doesn't make the effort to at least look. 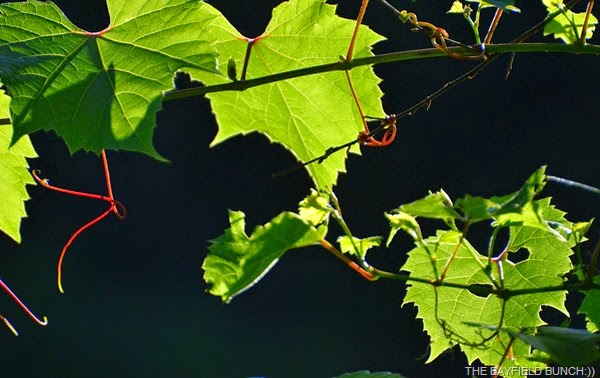 While out for a Motorcycle ride this morning I spotted a 'For Sale' sign on a piece of property just a few miles from where we live.  Looked promising so headed back home & Kelly looked it up on the computer.  A fully forested 69 acres & as expected out of our price range.  And besides we certainly do not need 69 acres but we took the Jeep over & had a look at the property anyway.  Had to look at it from the road because it was solid forest with no access.  But that was Okay because we always like looking at houses & properties anyway.  Gets us out of the house & gets a little bit of adrenalin pumping every time.  My kind of excitement. 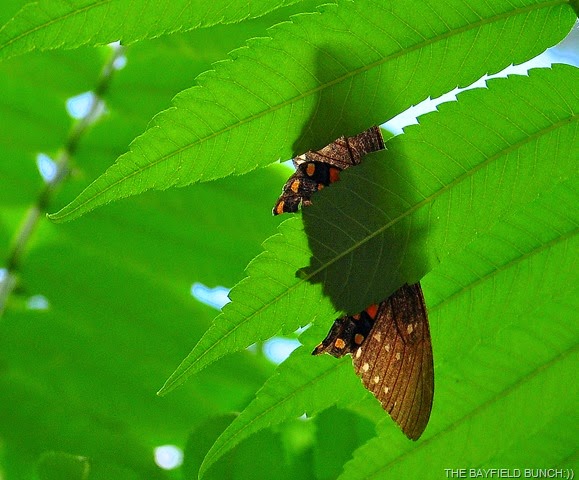 On our way home we spotted a small unoccupied house on a side road slowly being taken over by vines & trees.  Of course these places always intrigue us.  There was a nice looking farm across the road & Kelly spotted a fellow outside working away at some siding on his driving shed so in we went to ask about the property across the road.  Turns out this fellow owned the house & land in question but said the house was unliveable & the property wasn't really for sale.  In the course of the conversation Arizona came up & it turns out this fellow & his wife also spend their winter's in Arizona around Casa Grande & Quartzsite.  He walked over & opened the big driving shed door to reveal a big beautiful Class A Tiffen Allegro Motorhome.  We talked about RVing for a bit & in the course of that conversation came up the topic of aging, care facilities & nursing homes.  This fellow who's name is Fred mentioned that his Dad had just past away this past winter & with that nodded towards a white car sitting in the driving shed beside the Allegro.  Said the 2004 Pontiac 4dr Sunfire was his Dads.  Only 41,000 miles on it & the car had spent the past 7 winters in the driving shed & had only been driven a bit in the summertime.  Said he's probably going to sell it. 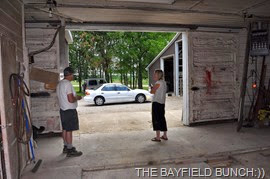 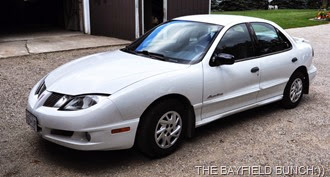 Well that grabbed our interest as we walked over & had us a look at this car which appeared to have just rolled off the assembly line.  All new tires to boot.  We hadn't actively been looking for another vehicle just yet but it has been in the back of our minds since we found out last summer the Santa Fe's A/C cannot be repaired.  Now with the recent clutch replacement & not knowing how long the repaired flywheel will last it may be time for us to to think about replacing the 2003 Santa Fe.  And besides we definitely need a vehicle with A/C.  Our summers are becoming hotter with higher humidity levels.  Fred said take the car for a drive so we did.  Liked it.  Couldn't get the A/C working but Fred said it was Ok last summer.  Probably just needs some Freon.  He's going to have it looked at & call us next week.   We haven't bought the car but we are thinking about it.  Car has been undercoated, well maintained, no rust & if we can agree on a price we just might pour some additional serious thought into it.  We'll see what shakes out next week.  Kinda funny how things work out sometimes eh...................... 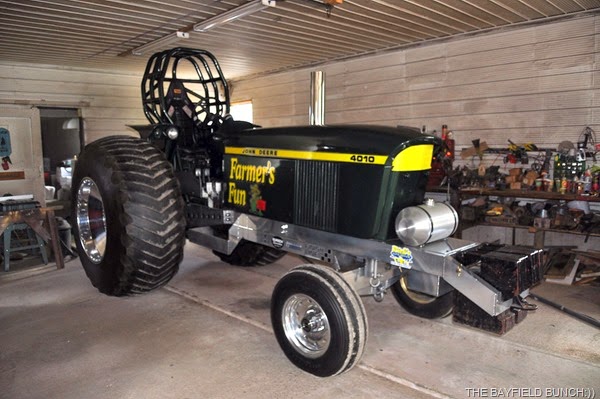 NOW HOW’S THAT FOR A POWERHOUSE JOHN DEERE TRACTOR

While talking to Fred this afternoon he took us over to another driving shed to show us the ‘toys’.  It’s a mechanical family here with interests in things other than the chores of routine farming. 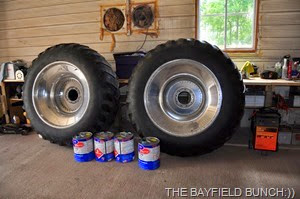 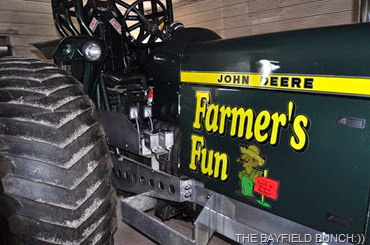 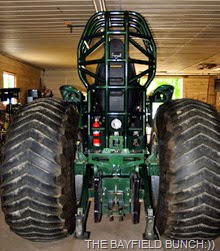 ARCHIVE MEMORIES::  APRIL 2008  Have you ever had a pine tree sneak up on you when you weren't looking. Happened to me last Saturday morning. I had walked out to the motorhome to unplug the electric cord because I intended to move the rig ahead about 20 feet to wash it. Opened the bin door, unplugged the cord, turned around & laid it on ground. Did you just catch my mistake!! I turned my back on an open bin door therefore making it a non existent open bin door. Kelly came out of the house with the dogs for our morning walk & off I went.

Upon returning I hopped into the motorhome, started it up, took a quick glance in the mirrors (no such thing as a quick glance!!) slapped it in drive & motored ahead. There is something about the sound of crunching & tearing metal that just kind of takes your stomach out on ya. You know you have just done something bad alright & by the sound of it there is probably going to be a costly repair involved somewhere. I knew there was no need to panic because whatever it was I screwed up would be out there waiting for me. I hazarded a look in my drivers side mirror & yup, there it was alright. A pine tree had sneaked up alongside the motorhome when I wasn't looking & all but tore off my (open) bin door. Trees will do that to motorhomes sometimes. But, I never thought a tree was smart enough to open the bin door first before attempting to wrench it right off the coach. After all, I had closed it...right??
Took my sick feeling stomach with me & exited the coach, walked around behind the motorhome to the drivers side. The bin door was twisted at an upward angle with the apparent & appropriate damage of course. Took it in my hands to try & twist it down but the whole door just came right off leaving an open & gaping electrical bin hole. The whole upper hinge mechanism was all torn & twisted. Torsion bar hanging askew, body flange bent, etc. etc. Amazingly enough the bin door itself was still intact. Wasn't twisted or bent, & no paint missing but that still didn't alleviate that awful feeling you get in the pit of your stomach when you've just screwed up by not seeing a pine tree sneak up on you. I remember my Dad having a brand new Honda generator years ago at his cottage, leaving it behind the car, & then promptly backing over it. The look on his face that day was the same look I had on my face last Saturday morning!!
No point in me trying to fix it because I'm still attending my 4th year night school class on how to change a light bulb. We have an auto body repair shop near us so Monday morning I took the rig over there & left it with the professionals. Picked it up Tuesday afternoon all fixed up but I'm too embarrassed to tell you how much that tree cost me. Let's just say it took a huge bite out of our income tax return this year.
Kelly was quick to point out to me that things like that don't happen to her. I was quick to point out to her that's because she never drives the motorhome or moves it around. She quickly pointed out to me that maybe it was about time she did!! Case closed:(( 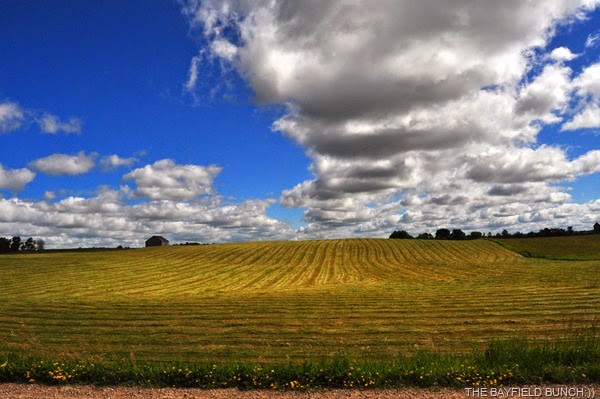 GROANER'S CORNER:((  And a nod to World Soccer today::  Sandy began a job as an elementary school counsellor and she was eager to help. One day during recess she noticed a girl standing by herself on one side of a playing field while the rest of the kids enjoyed a game of soccer at the other.  Sandy approached and asked if she was all right. The girl said she was.  A little while later, however, Sandy noticed the girl was in the same spot, still by herself.  Approaching again, Sandy offered, "Would you like me to be your friend?"  The girl hesitated, then said, "Okay," looking at the woman suspiciously. Feeling she was making progress, Sandy then asked, "Why are you standing here all alone?"  "Because," the little girl said with great exasperation, "I'm the goalie!"