HAMLIN BEACH STATE PARK TO BAYFIELD ONTARIO…..NICE DRIVE & NO PROBLEMS AT THE BORDER 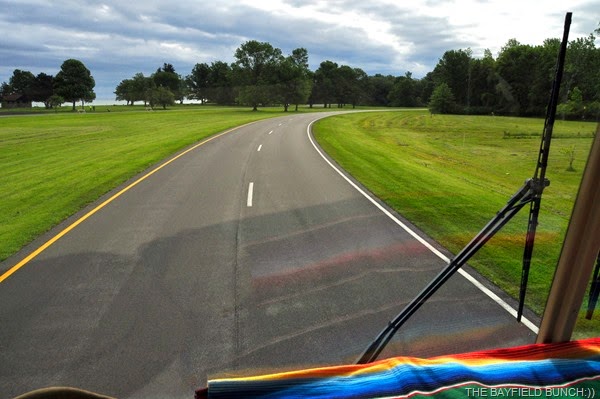 ROLLING OUT OF HAMLIN BEACH STATE PARK THIS MORNING

In Tuesday’s post I mentioned about tornado warnings in South-western Ontario & I see this morning one did touch down in the town of Angus.  What we didn’t realize was that same storm cell was heading directly to our area of Munroe County.  Kelly had turned on the TV to check the weather & sure enough we had a storm warning flash across the screen.  Quickly checked the live radar on our computers & sure enough we were in the bulls-eye of the same fast approaching  Ontario storm.  Skies darkened, wind picked up substantially, a few drops of rain on the roof & then down it came in torrents.  Thunder roared & lightning flashed but we were as snug as a bunch of bugs in a pile of rugs.  Storm lasted about half an hour before letting up.  That is except for strong gusting winds. 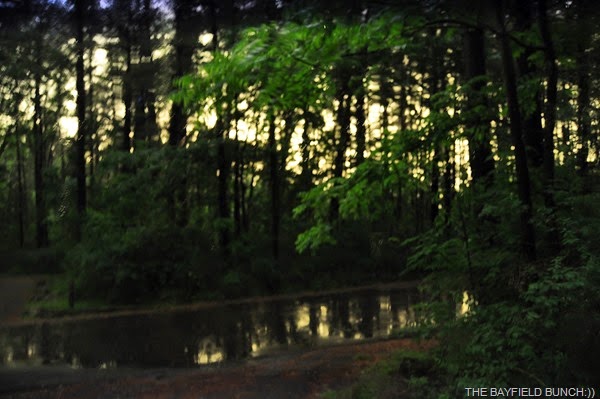 SKIES BEGINNING TO LIGHTEN AFTER A DELUGE OF RAIN & HIGH WINDS

Don’t know what time it was in the night but we were both awakened by the sound of crashing tree coming down somewhere nearby.  Didn’t land on us so we were soon back asleep.  This morning I figured I had better have a look around because I knew there was a tent camper just a few sites down from us.  They were OK & no tree had fallen on them.  Never did find the tree & we suspect it came down in the woods somewhere behind us.

NICE CLEAN WASHROOMS WITH DOUBLE SHOWERS IN THE CAMPGROUND AREAS & ALL HANDICAP FRIENDLY
Although I woke up feeling much better (think it may have been something I ate or tooooo much of something I ate) we decided to head ourselves back home this morning.  After last night’s storm our campsite was in a state of moocho muddiness & home was only a five & a half hour drive away.  And another thing to consider is that each day we Canadians spend in the States takes a day off our overall stay in the winter.  Doesn’t sound like much now but come next March we will have to leave the South-West earlier depending on how many days we have spent south of the border previously.  By heading home today we save ourselves another day or two at the end of our winter travels. 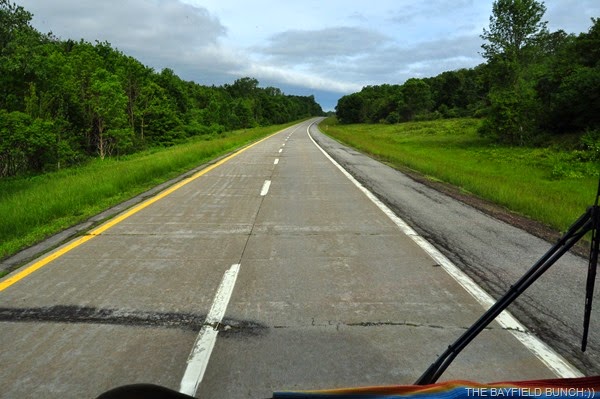 There was no point in hurrying to leave early & finding ourselves in the morning rush especially on the Canadian side of the border between the major cities of Hamilton & Toronto.  Took ourselves for a short leisurely walk on dry paved roads as opposed to muddy trails & we didn’t hurry our packing up.  Could see we would be under a heavy overcast for the drive home. 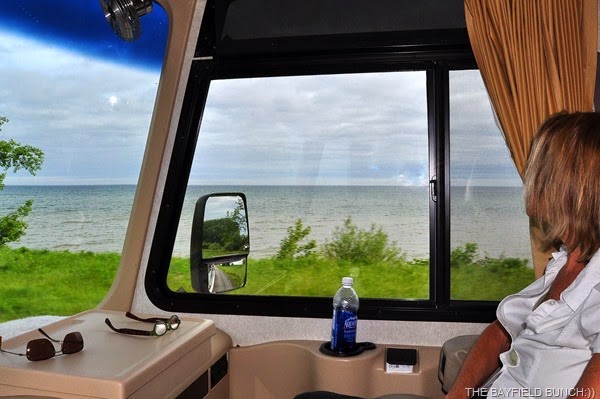 THE  PARKWAY RUNS PRETTY CLOSE TO LAKE ONTARIO IN SOME SPOTS & TORONTO ONTARIO IS OVER THERE ON THE OTHER SIDE
We were on our way by 8:40 a.m. & met with very little traffic all the way from Hamlin Beach to the border at Lewiston, a 65 mile trip.  The 35 mile scenic LAKE ONTARIO STATE PARKWAY running parallel with Lake Ontario reminded me of the Natchez Trace.  A four lane divided highway with no commercial traffic allowed.  We were basically the only vehicle on the Parkway with only 1 vehicle passing us.  The Parkway led us into highway 18 which again had a low traffic flow.  Nice. 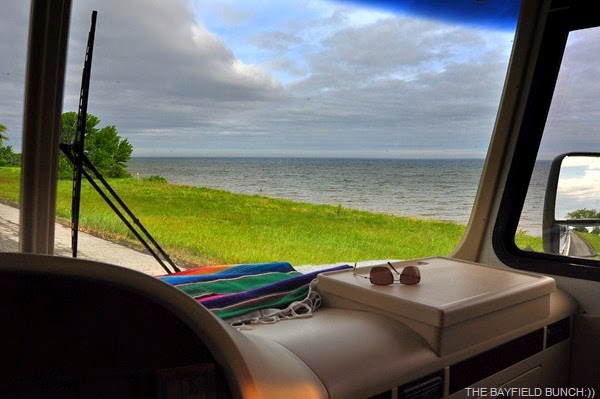 The only traveling I have ever done in the State of New York has been between Lewiston & Spencerport & I must say I have always been impressed with the neat & tidy look to most all the houses, towns & properties I have seen.  People really take a lot of pride in their homes & grounds.  Nicely mowed lawns, creatively designed flowerbeds with trees & shrubs trimmed.  Houses & buildings well kept.  Nice architecture & choices of color.  And I am always surprised at how many homes fly the American flag out front.  A nice touch we don't see too much of in Canada. 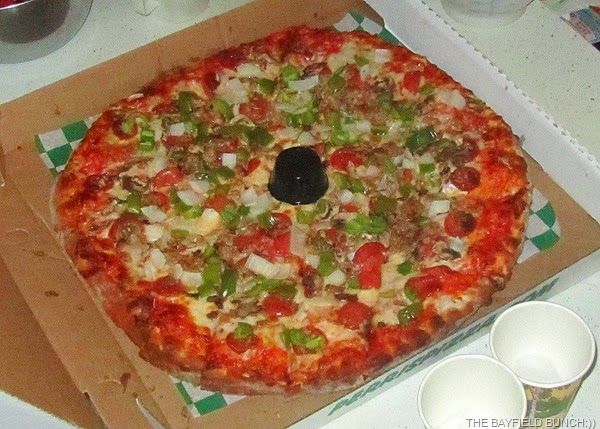 AND THIS WAS A SPENCERPORT PIZZA BEFORE WE DEMOLISHED IT TUESDAY NIGHT
One car ahead of us at the border at 10:15 & we had about a 30 second wait before we were at the checkpoint.  Half a dozen questions by a nice smiling young lady & we were on our way.  Now why can't it always be like that eh.  Traffic seemed lighter than our journey down last Thursday & we never had any problems but must say it is good to have a great navigator because if not I'm sure I would have missed some exits & entrances again today.  A few drops of rain on the windshield but not enough to turn the wipers on.  We were home by 2:30 & right away busy unloading.  Air was very humid & skies looked threatening.  Within an hour I was in the shower & soon stretched out in my recliner for a few brief zzzzzz’s.  Always great to be going somewhere & always great to be home:)) 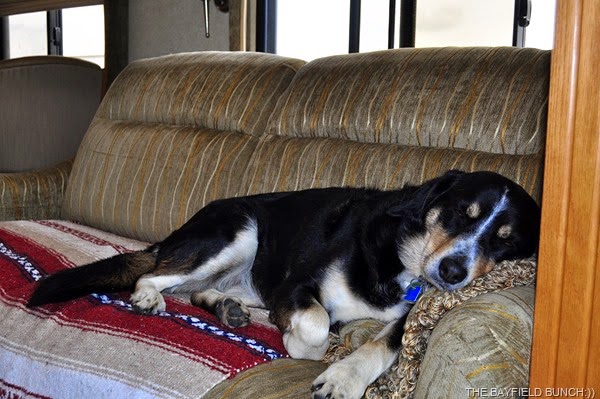 CATCHING A FEW BACK SEAT WINKS ON THE WAY HOME TODAY
GROANER’S CORNER:(( A research team proceeded towards the apex of a natural geologic protuberance, the purpose of their expedition being the procurement of a sample of fluid hydride of oxygen in a large vessel, the exact size of which was unspecified.   One member of the team precipitously descended, sustaining severe damage to the upper cranial portion of his anatomical structure; subsequently the second member of the team performed a self-rotational translation oriented in the same direction taken by the first team member.   TRANSLATION:
Jack and Jill went up the hill to fetch a pail of water.
Jack fell down and broke his crown and Jill came tumbling after.