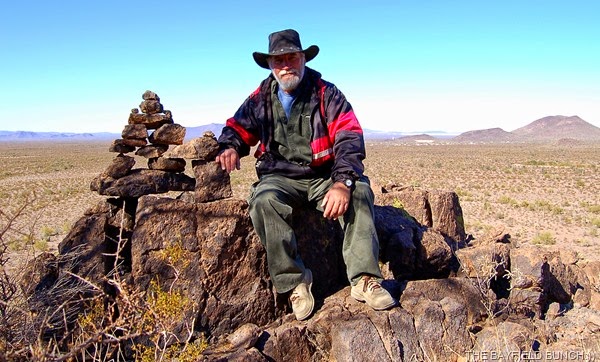 Kind of a carbon copy day of the last 2 days so nothing new at our end.  We sure are glad we have a nice cool air conditioned sticks & bricks to spend these hot summer days in.  Weather channel tells us we have one steam bath day left before temperatures drop by Wednesday.  Stormy weather headed our way Tuesday.  Was 85F here today but the humidity factor took that to 95F.    I will leave you tonight with a little something I call ‘dumb & dumber’.  A couple things I did back in early January of 2007.   We had a truck & fifth wheel at the time & we were staying at the HICKIWAN TRAILS RV PARK in Why Arizona.  Why is about 122 miles west of Tucson. 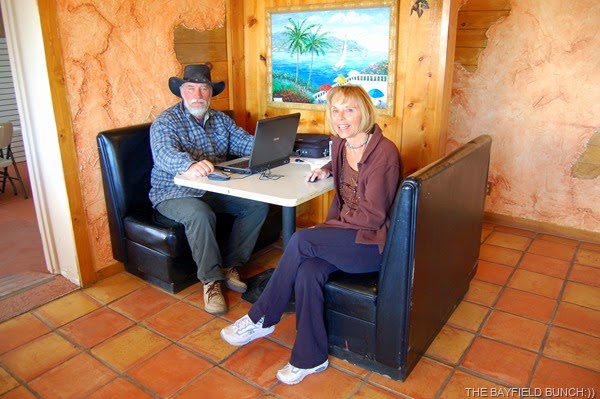 A LITTLE RESTAURANT IN AJO ARIZONA AT THE TIME WE WERE STAYING AT HICKIWAN TRAILS IN WHY ARIZONA
ARCHIVE MEMORIES::  Boy oh boy oh boy, did I ever do something dumb last night. I had been re-organizing my wallet after cleaning sand out of it in the afternoon & laid it on a small wood table beside my lawn chair. Max (our oldest dog at the time) in his quest to get a game of sticks going had apparently bumped the table knocking my wallet over the edge into the doggy guys water dish where it probably remained for a couple minutes. No problem I thought as I lifted it out, but noticed it was already pretty wet inside. In order to dry everything out I made the first part of a big mistake. I laid my wallet on the tonneau cover of the pick-up truck to dry. Laid out some credit cards, driver's license, CAA card, etc. The tonneau cover is black & felt warm from the sun so figured everything would dry quick. Well, you probably know what's coming. 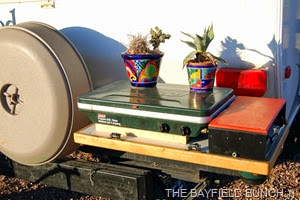 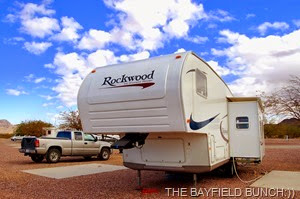 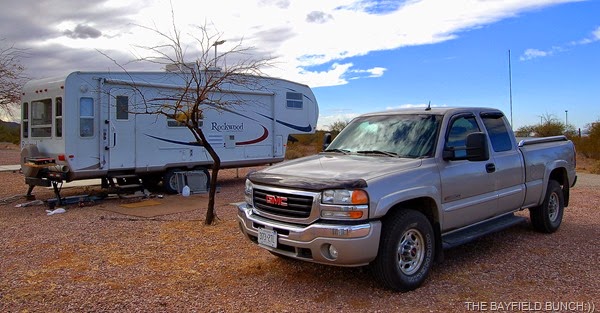 A couple of hours later just after supper I decided to head down the road about half a mile to check our Toshiba lap top for emails at a remote wifi spot near another campground.  (Coyote Howls RV Park) Out I went, jumped in the truck, & took off out of the park & down the highway. When I reached the wi-fi site I pulled off the road & stopped, got out of the truck, walked around to the passenger side to access the computer, glanced at the back of the truck & "OH NO!!" In a sickening flash I remembered my wallet & cards that I had laid out there earlier, and..........they were all gone.

Jumped in the truck & raced back to the trailer, rushed in & told Professor Rockhound (Kelly was collecting a lot of rocks at that time so I called her Professor Rockhound) what had happened. I knew the only hope I had of ever finding anything lying on the road in the day’s fading light was to get an expert ground scanning person involved. She quickly headed out the driveway to the highway in full ground scan mode. I took the truck & slowly started driving the highway shoulder & immediately found my Scotia debit card lying right in the middle of the highway. Continued up the road a bit & turned around. By the time I got back to the area where I found the debit card I saw the Professor busily scooping things off the highway & alongside the road. Oblivious to traffic which consisted of 1 ambulance heading east, she was on the job!! By the time I got the truck stopped she had already retrieved my wallet which had been lying open upside down in the eastbound lane. I probably drove over it myself in my rush to get back to the trailer a few minutes before. She had also found what was left of my driver's license. It was the only thing damaged. I found one more card on the southbound shoulder & that completed everything. We were only moments away from complete nightfall but the eagle eyed Professor had saved the day. Nothing missing from inside the wallet either. Both American & Canadian money were intact. 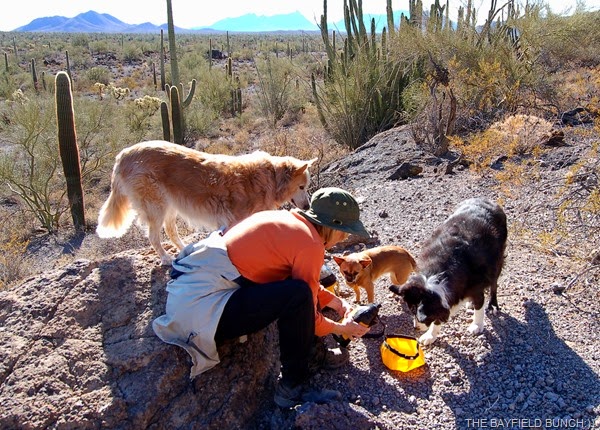 It sure would have put an unfavorable dent in our vacation plans if all had been lost. Thanks to our superb ground scanning Professor we were spared to travel another day. It was a close call & I had to promise that I would not be so dumb in the future. Well, that didn't work because here's what I did just a few days later.  Awwwww nuts!! 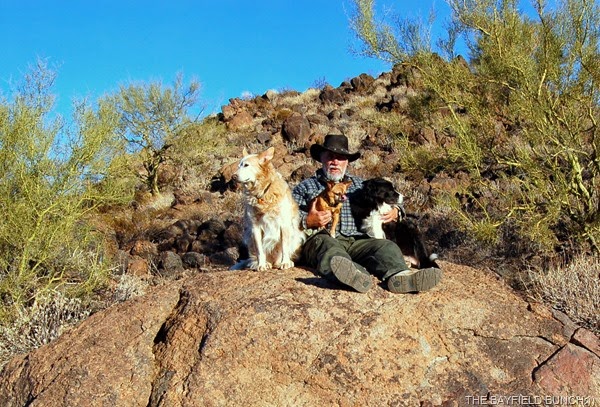 POSING FOR A PICTURE WITH MAX, CORA, & CHECKERS JUST EAST OF THE RV PARK
Decided to clean up the cab of the truck so opened the passenger door to pull the floor mat out. I was wearing my black cowboy hat which I had just purchased near Carlsbad New Mexico a few weeks before. As I bent over I knocked my hat off so just reached down, picked it up & casually tossed it around the corner onto the tonneau cover behind the cab. Sound familiar!! 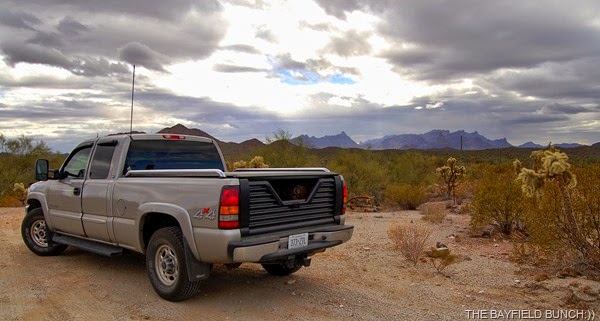 Finished the clean up & went inside the trailer. Kelly said she was heading into Ajo (about 10 miles away) for some groceries & would be back in an hour or so. I had some stuff to catch up on with the computer so said, "ok, see ya later." It was probably about 10 minutes later when the hair on my head almost stood straight up as I suddenly realized............my hat was on the back of the truck!!!! Oh noooooooo!!!! I rushed out of the trailer, down the road, around the corner & up to the highway vainly looking off in the direction Kelly had traveled with the truck. No black object on the road or shoulder resembling a cowboy hat. Walked a short distance along the road but knew it was futile. My hat was gone forever & that's all there was to it. 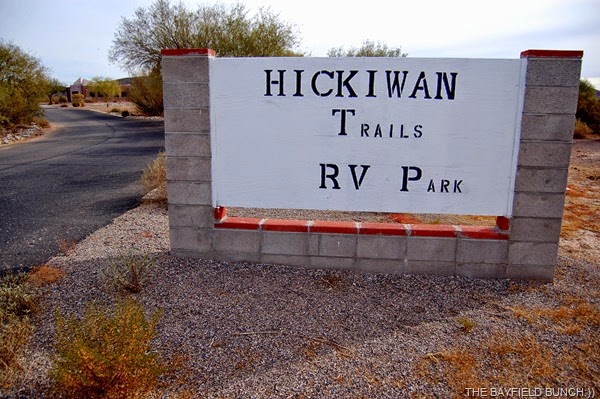 I'm not a hat person & this cowboy hat was the only one I had ever stuck on my head that I thought didn't make me look like a total nerd. I was like a little boy who had just lost his most prized possession of ever. And I was sooooooooo mad at myself because of the wallet incident just a few days before. Why didn't I learn my lesson that time about setting things on the back of the truck. 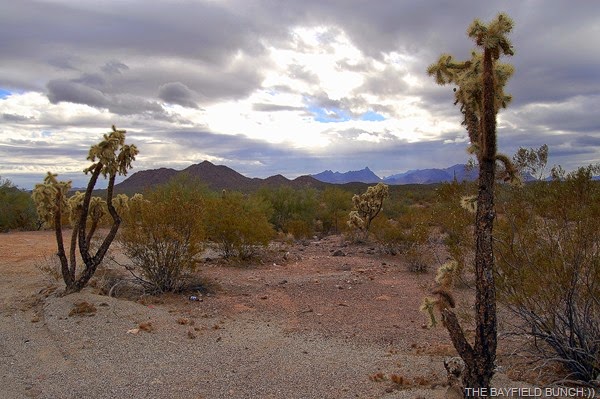 I was in the trailer slumped in a chair when I heard Kelly pull in with the truck. How was I going to explain to Kelly that she had probably married the dumbest creature on the planet. The thought did occur to me that she was most likely quite aware of that already:(( The screen door opened & Kelly came in with a couple bags of groceries and there perched atop her beautiful blonde head was............................ my black cowboy hat:)))))) At that moment I was the happiest little wannabe cowboy kid west of the Pecos. 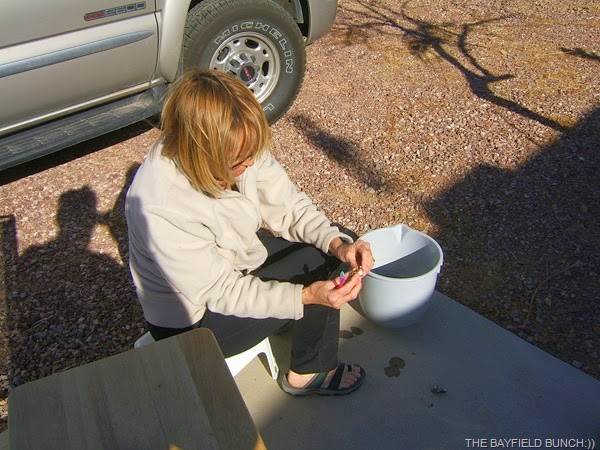 PROFESSOR ROCKHOUND WASHING UP HER DAILY FIND OF INTERESTING ROCKS

Kelly said it was a movement in the rear view mirror that caused her to look as she was accelerating down the highway after leaving the Park. That movement was my cowboy beginning it's take-off roll across the tonneau cover runway in preparation for lift-off into the big blue Arizona sky. She quickly backed off the gas, slowly braked & pulled over to the side of the road & retrieved my precious hat. Now she was faced with a decision. She could turn around & bring the hat back before I probably even knew it was missing or she could keep on going & let me stew about my missing hat until she got back. She made the right decision. She cranked up the burner & continued on her way letting me stew for an hour.  I certainly was well done by the time she returned!!  So do you think I learned my lesson??  Say, did I ever tell you about the time I..................... 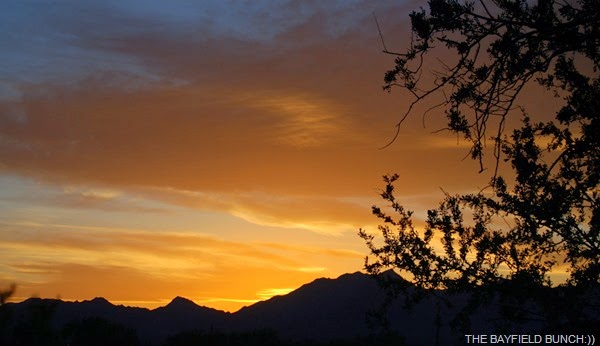 GROANER’S CORNER:((  The fourth-grade teacher had to leave the room for a few minutes. When she returned, she found the children in perfect order. Everybody was sitting absolutely quiet.  She was shocked and stunned and said, "I've never seen anything like it before. This is wonderful. But, please tell me, what came over all of you? Why are you so well behaved and quiet?"  Finally, after much urging, little Sally spoke up and said, "Well, one time you said that if you ever came back and found us quiet, you would drop dead."