DRIVEWAY DOCKED TILL NEXT WEEK SOMETIME

On wet roads under heavy overcast gloomy looking skies we had the big wheels rolling this morning about 8:50 a.m.  Nice to be on the move going somewhere again.  Last week on our trip up to the Bruce Peninsula we had so much static on our Sirius Satellite radio driving up & back we could not use it.  Radio works fine if the rig is stationary but as soon as we turn on anything electronic like the back-up camera especially we can't listen to the radio because of the static.  Must be an electronic anomaly in the rig's wiring somewhere.  I remember years ago we used to buy a small device called a capacitor or something & install it somewhere in the wiring or on the engine to cut out static but that was 40 years ago & probably none of that technology applies anymore.  Anyone have any ideas what could be causing the static on our Sirius Satellite radio??

KELLY SNAPPED THIS ONE OF THE HAMILTON STEEL YARDS

The trip to Spencerport NY went fine.  Traffic was normal for the time of day.  A few slow downs, a touch of construction & that was about it.  We made a coffee/gas stop near Woodstock Ontario.  Only 2 vehicles ahead of us at the border & only two questions before we were on our way.  Where are you going & how long will you be in the country.  A second gas stop at Smokin Joes to fill up the rig & we were again eastbound.  We took traffic light alley route 31 all the way to Spencerport.  About 70 miles with about a dozen small towns & about a thousand & forty two traffic lights.....well that's the way it seemed anyway.  Pulled into Kelly's Mother's place about 2:40 p.m.  Trip had taken us about five & a half hours with the rig just a purrrrrrrin along all the way. 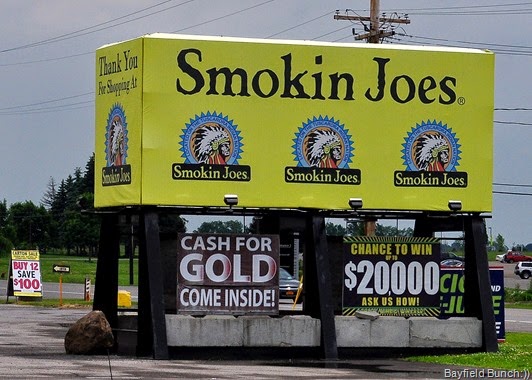 Didn't take long to unhook the Jeep & get the Motorhome backed into position up alongside the driveway.  Kelly's Sister Becky & husband Norm are here from Florida.  Last time I had seen them was in Truth Or Consequences New Mexico back in the Spring of 08 when they were working at the River Bend Hot Springs.  They had a Class A Challenger similar to ours at the time.  Hadn't seen Kelly's Mother for about a year so lots of visiting going on here today & the next bunch of days. 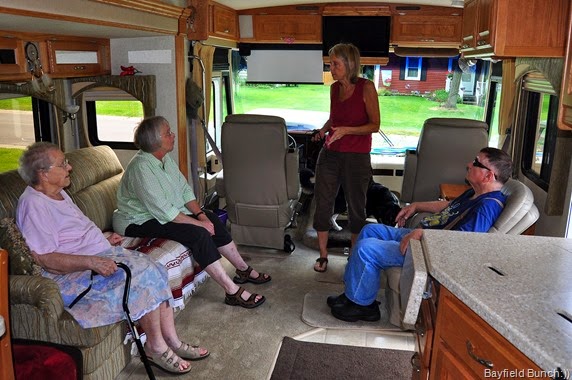 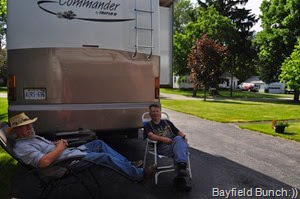 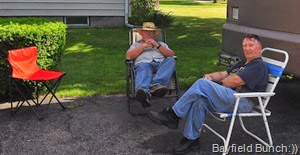 STAYING IN THE SHADE KEEPING COOL IN TODAY’S WINDY BREEZES

That's about it for today & we'll see what shakes out over the next week or so.  And sometimes I say the dumbest unthinking things in my blog.  More about that in a later post…….. 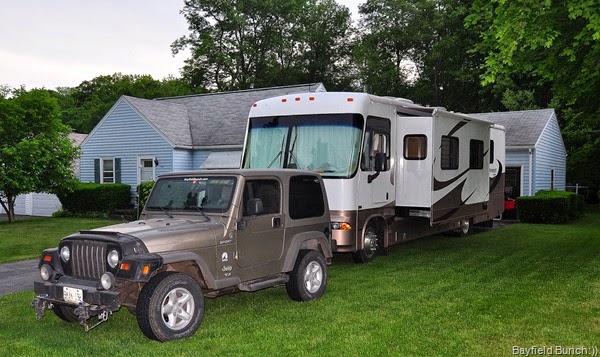 GROANER'S CORNER:(( A game warden noticed how a particular fellow named Sam consistently caught more fish than anyone else. Whereas the other guys would only catch three or four fish a day, Sam would come in from the lake with a boat full of fish. Stringer after stringer was packed with freshly caught trout. The warden, curious, asked Sam his secret. The successful fisherman invited the game warden to accompany him and observe.  So the next morning, the two met at the dock and took off in Sam's boat. When they got to the middle of the lake, Sam stopped the boat, and the warden sat back to see how it was done.  Sam's approach was simple: He took out a stick of dynamite, lit it, and threw it into the air. The explosion rocked the lake with such a force that dead fish immediately began to surface. Sam took out a net and started scooping them up.  Well, you can imagine the reaction of the game warden. When he recovered from the shock of it all, he began yelling at Sam, "You can't do this! I'll put you in jail, buddy! You will be paying every fine there is in the book!"  Sam, meanwhile, set his net down and took out another stick of dynamite. He lit it and tossed it in the lap of the game warden with these words: "Are you going to sit there all day complaining, or are you going to fish?"