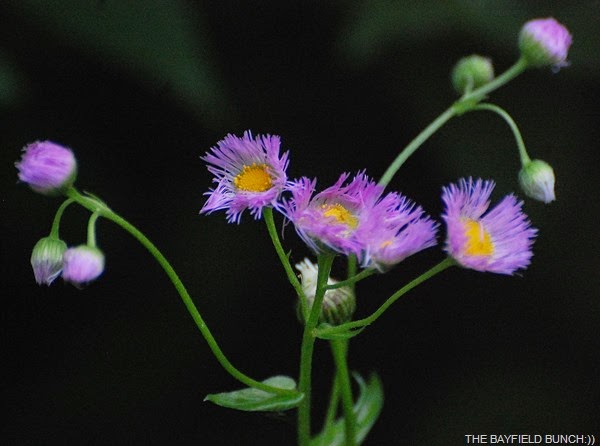 Rains came in the night & clouded us up for most of the day.  Grounds were dry & the rain was welcome.  Also helped to wash our annual yellow pine pollen menace off things.  Each year at his time pine trees give off a very fine talcum powder like pollen which puts a yellow dusting on everything.  Comes through screens, closed doors & locked windows. 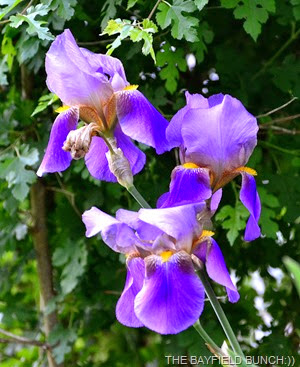 Washed the Jeep & cleaned all the bugs off the front end & windshield of the Motorhome today.  We will likely head out in the morning around 9.  Sure a lot more complicated getting things ready for cross border travel nowadays than it was years ago.  At one time there was no thought given to travel insurance & a drivers license was all that was ever needed for a border crossing.  Passports in those days were only used by wealthy folks traveling to European countries.  No cell phones so no special cell phone plans for the States.  No internet so no hassles there & televisions were only ever found in people's living rooms so no confusements there either & the word ‘remote’ meant somewhere in a far away wilderness & not a plastic device held in one’s hand for changing TV channels.  Indeed it was a simpler life & we all coped just fine without all our modern technologies.  We didn't miss anything because we didn't know what there was to miss.  Minds at the time had no way of seeing or comprehending the technology breakthroughs just over the horizon.  Guess it's the same now.  We just cannot fathom or foresee the ever increasing fast paced technology coming......just over the horizon. 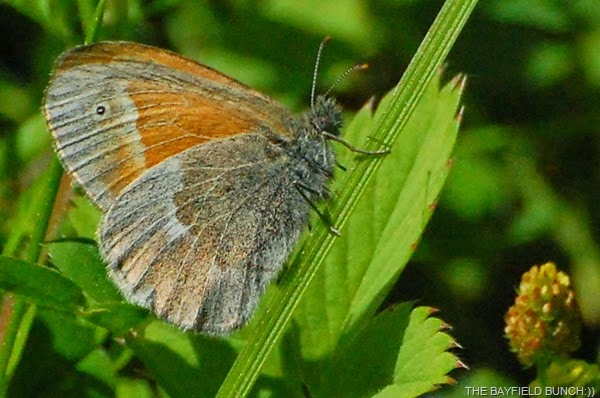 I customarily have myself a cup of flavored Yogurt every night after supper.  Last night it was a never before tasted 'Wild Berry' from Danone.  With the first spoonful I detected a slight taste that brought back a familiar memory to me.  There was a slight tang of bitterness & it reminded me of something I drank an excessive amount of years ago and never did like the taste of.  From the very first bitter tasting beer I ever drank to the very last bitter tasting beer I ever drank there was not one single solitary beer in between that I ever sat back & said, 'WoW' does that ever taste good.  Never, not even once.  Well not that I recall anyhow.  Now that may sound very strange coming from someone who's life revolved around beer, hotels, bars, & that type of lifestyle for about 20 years. 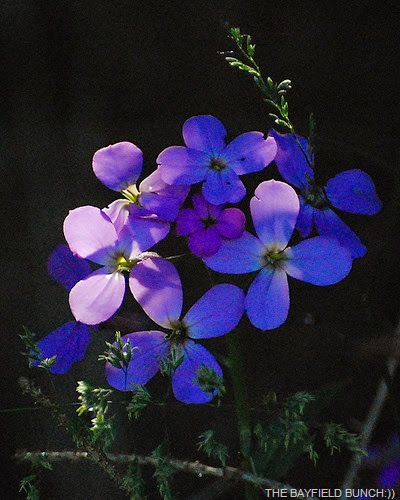 Only reason I ever drank beer was for the effect & I liked the barroom atmosphere of sitting around with a bunch of friends drinking, carrying on, telling wild stories, living some of those stories, & just embracing the whole zany & carefree lifestyle.   But I never ever did like the taste of the booze that kept me in that lifestyle for the length of time it did.  Beer to me was horribly bitter & I hated it.  I choked down wine only because of the mellow way it altered my mind.  I could never stand the taste of that stuff.  No matter if it was expensive wine or cheap wine it all tasted the same to me.  Yuk.  And I never understood how anyone could drink whiskey, vodka, gin, rum, or any of that stuff yet I've drank them all.  Mixed them with all the usual suspects like coke, orange juice, sprite or whatever & yet every mouthful, every swallow or every sip tasted awful to me.  Gagged me more times than not.  But to be a part of the gang, the group, the boys, or the society I hung out with at the time it was the way to get your mind to where you wanted it to be.  Took me to heights where sobriety never went.  And for the majority of those years that is exactly where I wanted to be & I did whatever it took to keep myself there.  I loved that party atmosphere.  Cigarette smoke, booze, loud music, lots of people & the camaraderie of best buddies.  That world ended abruptly for me nearly 35 years ago.  And none too soon I may add. So what do I consider the best tasting drink that has stood the test of time for me?  Why, a cold glass of Skim milk of course.  It was my favorite drink as a Kid & it is still my overall favorite drink now as a Senior.  A cold glass of milk works for me every time & doesn't mess with my mind in the process.  And I don't have to hang around in the bars & live that kind of life anymore to enjoy a nice cold glass of skim milk either.  And for that I am very grateful:)) 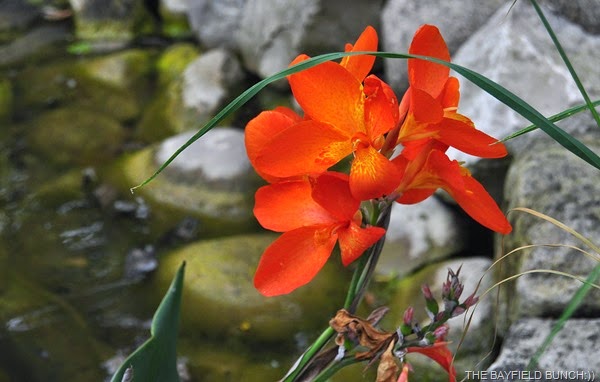 A FLOWER IN THE POND AT DEER PARK LODGE
We met Rita & Herman at 'The Docks' at 5 o'clock for supper.  Usually we are the early birds but they were there sitting on a bench outside waiting for us.  Rita was on the phone with her Sister Irmgard in Calgary.  She put the phone up to my ear & I was able to say a quick hello to Irmgard who incidentally is another blog follower of ours.  Seated inside we spent a couple hours chatting away & it turns out Rita & Herman have traveled far & wide in their varied RV's over the years.   And their first RV was a Triple EEE:))  They have been to Alaska 3 times & Herman an avid fisherman is quite proud of the 99 pound Halibut he caught in Alaskan waters.   Their favorite area of RV travel has always been the American Southwest & Herman especially liked the golf courses around Tucson.  He is one of those fellows with a perpetual twinkle in his eye & a ready laugh.  I think he is the spryest 90 year old I have ever met.  Truly nice people & easy to be around & talk to.  They have been following my blog for many years.  From here they are slowly making their way back to Ottawa.  Always sad saying goodbye to people like Rita & Herman because it is likely we will never see them again.  All the best folks, safe travels & thank you so much for taking the time to drop in & say Hello & thank you very much for supper:)) 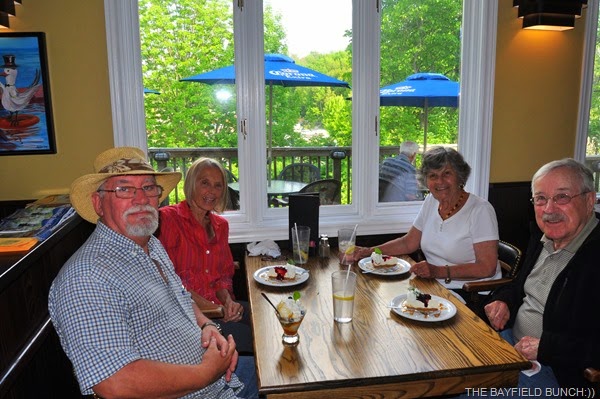 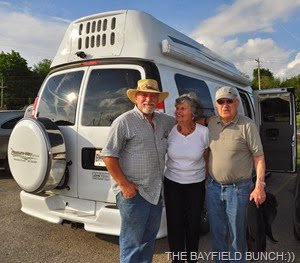 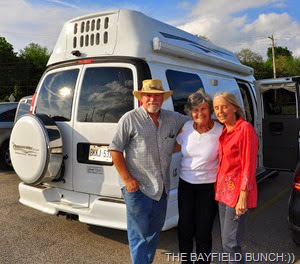 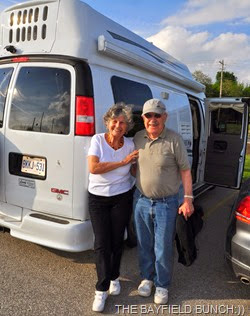 GROANER'S CORNER:(( When Beethoven passed away, he was buried in a churchyard. A couple days later, the town drunk was walking through the cemetery and heard some strange noise coming from the area where Beethoven was buried. Terrified, the drunk ran and got the priest to come and listen to it. The priest bent close to the grave and heard some faint, unrecognizable music coming from the grave. Frightened, the priest ran and got the town magistrate.  When the magistrate arrived, he bent his ear to the grave, listened for a moment, and said, "Ah, yes, that's Beethoven's Ninth Symphony, being played backwards."  He listened a while longer, and said, "There's the Eighth Symphony, and it's backwards, too. Most puzzling." So the magistrate kept listening; "There's the Seventh... the Sixth... the Fifth..."  Suddenly the realization of what was happening dawned on the magistrate; he stood up and announced to the crowd that had gathered in the cemetery, "My fellow citizens, there's nothing to worry about. It's just Beethoven decomposing." (you might have to think about this one for a minute:))