A LAST MORNING WALK BY THE LAKE & WE HEADED HOME 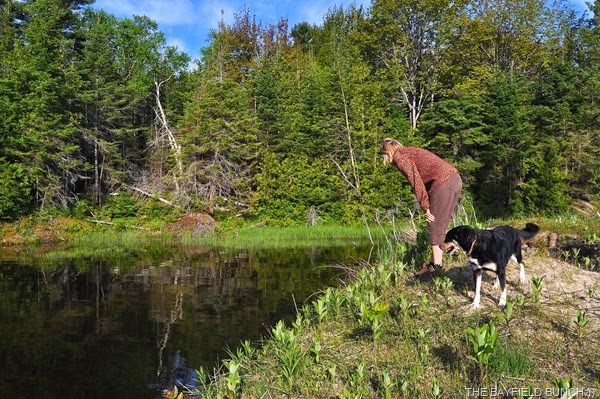 Can't remember the last time I stood by a lake under a starry night sky with Moonbeams shimmering across the water.  But that is what Pheebs & did Thursday night.  A half Moon overhead cast a faint pall of light across forested land but it was sparkling Myles Bay that focused my attention & my thoughts.  Thank you to the one's who made this all possible for us. 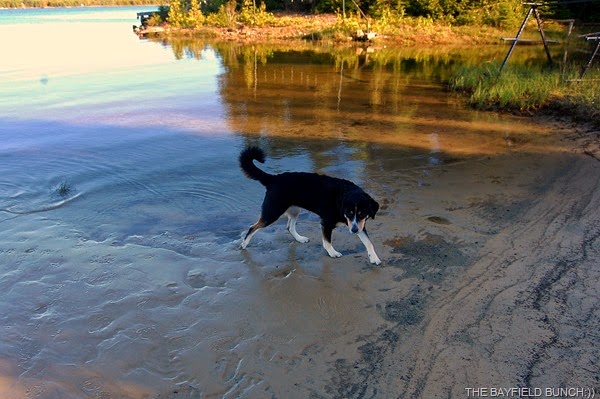 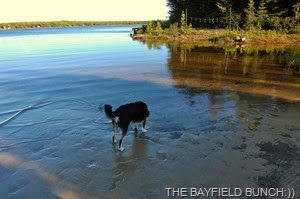 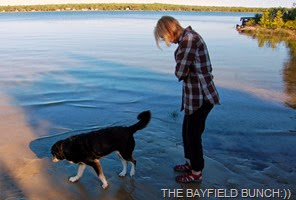 Imagine our surprise when a white CAMP CELTIC school type bus rolled in shortly after 7 a.m. this morning with about 20 exited young kids on board.  Out of the bus they went, across the beach & into the water.  Here's Kelly & I with the furnace running dressed in warm clothes & there's all these young kids in bathing suits out there splashing around in Lake Huron which less than 8 weeks ago still had large chunks of ice floating in it.  And I imagine this shallow bay would have been totally frozen over this past winter.

CHECK OUT THE SOUR LOOKS ON SOME OF THESE KID’S FACES & TELL ME THEY AIN’T COLD
Waited for the Kids to leave before we set out on our last tranquil beach walk.  Said goodbye to all the colorful Kayaks & gave our pet rock a final pat as we strolled by.  Remember the one I had some photos of in Thursday's post.  That big rock anchored in the beach sand with all the circles in it is now my Fav:)) 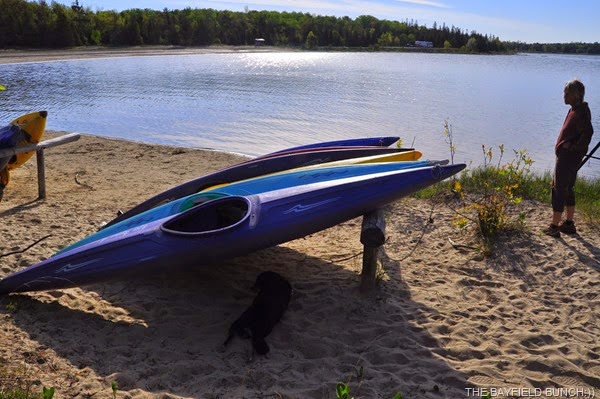 Didn't take us long to rig the coach for travel.  I had already hooked the Jeep up the afternoon before.  We marvelled at how well our 3 days had gone.  All systems worked well & we are totally thrilled with our Big EEE.  Love the 2 furnace idea.  With me sleeping in Zone 1 I can keep it warmer than Kelly who sleeps in Zone 2 likes it.  And yes that is how Triple E describes the areas each furnace heats.  And previous owner Don had never used the built in coffee pot but we tried it & loved it.  Beats having a big old Mossmagator of a Percolator taking up big space on a limited kitchen top Counterator.

WE’RE JUST ABOUT READY TO ROLL
Waved goodbye to our quiet little boondocking spot at 8:45 a.m. & headed off for the little crossroads whistle stop of Ferndale.  Took on a half load of fuel & pointed the rig's nose south for home.  Had it not been a week-end Friday night we probably would have slipped on down to the Cape Crocker area but we knew the week-enders would soon be on the road so wanted to be out of the area before they came pouring in.  A coffee stop at Wifi friendly Tim Hortons in Wiarton enabled me to publish Thursday's post.

Had ourselves a slow relaxing drive home through our Southwestern pastoral countryside.  A detour threw us a bit of a curve but no problem as the rig's a pleasure to drive & I didn't mind the extra miles.  We were home before 1 p.m.  And we both agreed, even though we had only been away 3 days it was nice to be home again.  Always nice heading out & always nice coming home.  A fine example of a nice/nice way to be able to do things. 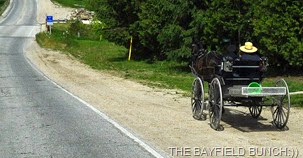 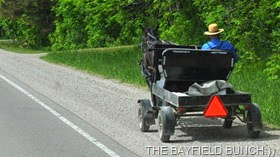 GENTLY ROLLING HILLS OF RURAL & SOUTHWESTERN ONTARIO CANADA
We have a few bugs to work out but nothing serious.  Have to come up with something to bring in a stronger Wifi signal for Kelly's Blackberry.  The locking gas cap has to go & we will replace it with a standard cap.  Going to have to bungee cord the windshield curtain which ties back beside the driver. (can be seen in photo below)  Driving with my window open a couple days ago the wind ballooned the curtain out wrapping it around my head.  Scary couple seconds there.  Gotta figure out why we have so much static on the Sirius Satellite radio at times.  And here's a unique problem I have with all the light beaming into the coach.  As bright & cheery as it is I can't see my laptop computer screen well enough to correctly edit my photos.  Just too many reflections everywhere.  Even with the day/night shades down. 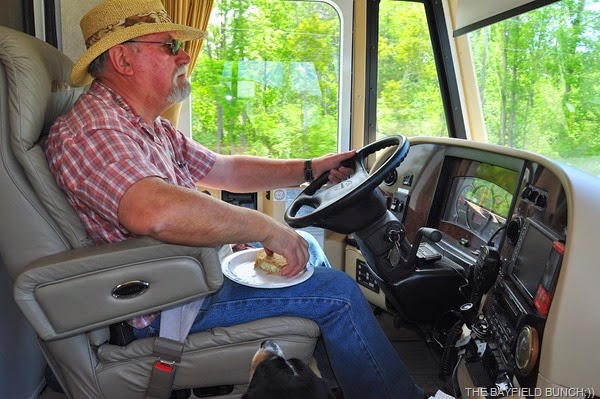 And 'in my opinion' there is a simple design flaw on the EEE's dashboard.  The FM/CD radio & the back up camera screen should have been reversed .  It is the radio that physically & visually demands more of the driver's attention than the much less used back up camera.  Radio should have been designed higher up on the dash with the back up camera underneath, not the other way around.  Heater controls are Okay & easily accessible but not the radio.  Not a serious problem but it bugs me because I keep reaching for where the radio should be easily accessible & it's not there. 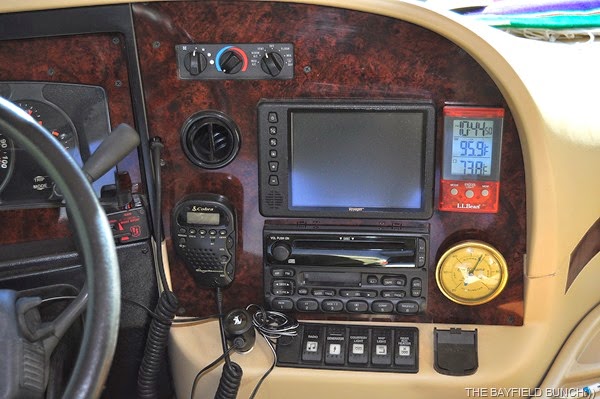 But all & all our shakedown cruise was a major success.  Mission accomplished:)))))))

I’M GETTING PRETTY DARING DAD
GROANER'S CORNER:(( A little boy watched, fascinated, as his mother gently rubbed cold cream on her face.  "Why are you rubbing that stuff on you face, mommy?" he asked.
"To make myself beautiful," said his mother.  A few minutes later, she began removing the cream with a tissue.  "What's the matter?" he asked. "Are you giving up?"

One morning, when my son was about 3 years-old, he saw me putting on a pale green face-mask. (Something I rarely do.)  "What 'ou doin'?" he said.  "I'm putting on a face mask," I replied.  "What it for?" he asked.  "It's to make Mommy look more beautiful," I told him.
He stood looking at me in that considering way that small children have, then said as gently as possible, "Well ... it doesn't."