A DISTURBING PHONE CALL & PHEEBS HEADS FOR THE SPA 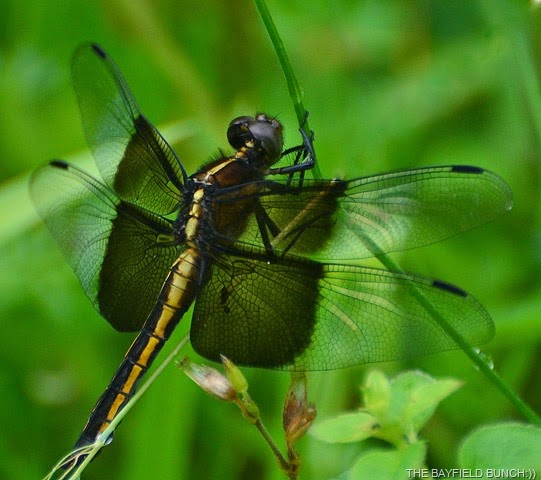 A disturbing phone call from Kelly's Mother in Spencerport this morning.  She had just received word that Kelly's sister Becky in Florida had suffered a heart attack & was taken by ambulance to the hospital where she remains undergoing tests & monitoring.  Readers may remember just over a week ago when Kelly & I were at her Mother's in Spencerport New York.  Becky & husband Norm were also there spending a 10 day holiday.  Becky is a nurse & luckily was on the job at a retirement home when the heart attack occurred.  We haven’t received any further word so are assuming Becky is in stable condition.

Pheebs was due for a nail trim so we opted to go all out & get her all spiffed up this morning.  She was needing a good bath & brushing anyway.  As an added bonus she also snagged herself a nice massage.  And on top of coming out of all that smelling like a rose she convinced Mom & Dad to get her a brand new spiffy red doggy collar as well.  What a pampered little pooch she was today.  Took about an hour or so at the groomers in Varna & she was just so overjoyed to see us when we came to pick her up. 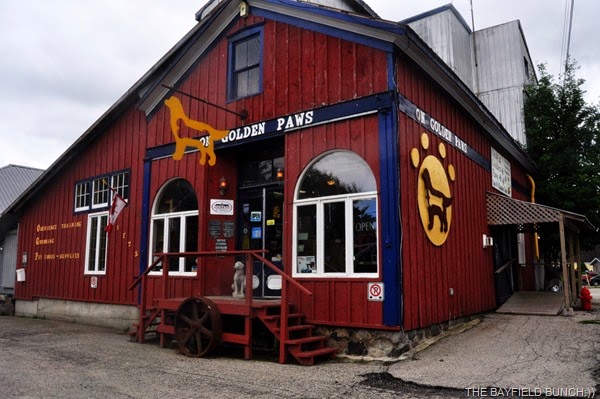 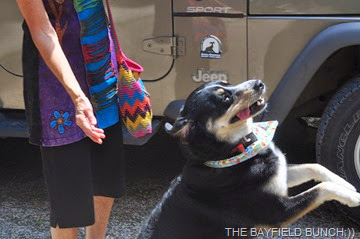 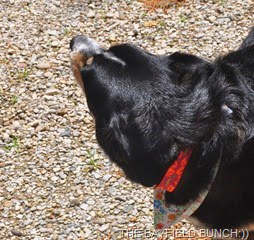 SHE SURE WAS A HAPPY LITTLE GIRL TO SEE US 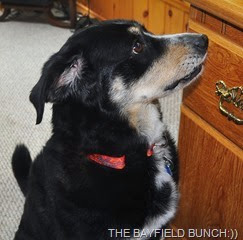 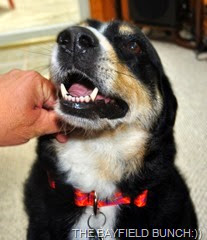 POSING WITH HER NEW RED COLLAR 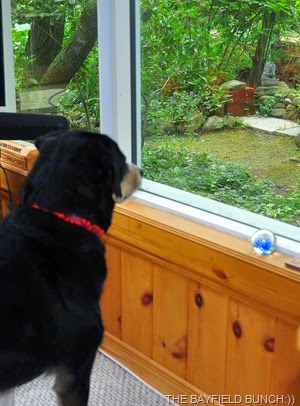 It started with our front deck.  Anyone living in a forest or an area with a lot of trees around their house knows about mold.  Summer heat combined with summer rains soon combine to grow mold in shaded areas.  Frequently on the north side of houses & we are no exception.   You know the stuff, it's green & soon begins growing on just about anything that doesn't move.  It was time once again to haul out a jug of anti-mold solution, a scrub brush & the power washer to do battle with the growing mold Monster.  From the front deck it was around to the back deck.  Then there were the patio stones, wooden steps, house siding, lawn furniture tables & chairs.  That mold is persistent stuff & the job took me the best part of 3 hours.  Kelly tried to grab the power washer & turn it on me.  Said because I’m slowing down she needed to get some of the mold off me too but I told her mold don’t grow on this here rolling stone.  Least ways not yet anyway.  And anyone using a power washer sure knows the water world one works in while using this kind of equipment.  I was about as wet as anything & everything I sprayed.  Do I look at it as work?  Not really, I'm just happy to have something to do:)) 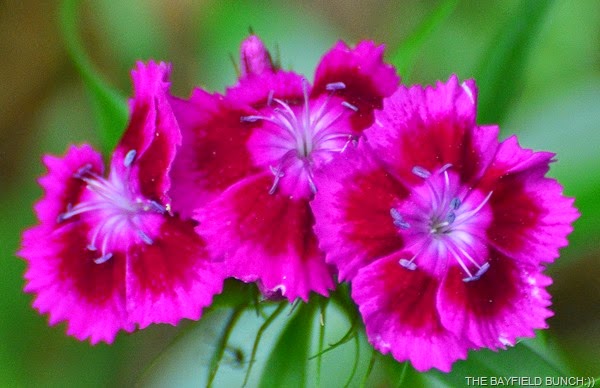 On my desktop screen I have a couple weather icons with one showing the current temperature in Bayfield Ontario while the other shows the current temperature in Congress Arizona.  Right now at 6:30 p.m. in Bayfield it is 62F.  There is a 3 hour time difference between here & Congress so at 3:30 in the afternoon our Congress house is sitting in 93F heat.  I am much happier with our Bayfield temperature than I would be with that Congress Arizona temperature.  It's an odd feeling being about 3,550 kilometers or 2,200 miles away from our Congress home.  There's our house & all our stuff just sitting there & there's nothing we can do to change anything like water some plants, open some windows, keep an eye on the ceiling when the Monsoons come, etc.  Too far to just drive on down & check things out.  We do have a neighbor keeping an eye on things but it just isn't the same as being there ourselves.  No idea how any of my plants are faring but at least this summer there are no sheep or goats wandering the property eating & stomping all my efforts into the ground.  Wow was that ever a big mistake we made the first year.  We have never seen the South-West in the summer time but the thoughts of flying down for a few weeks, renting a car & staying at the house just doesn't interest us.  It's the flying down part we don't like & stuffing Pheebs into a crate in the cargo hold of an airplane just is not an option.  Oh well, counting the days until we once again get the big wheels rolling south for our little adobe Ranchito on aptly named Ghost Town Road in Congress Arizona. 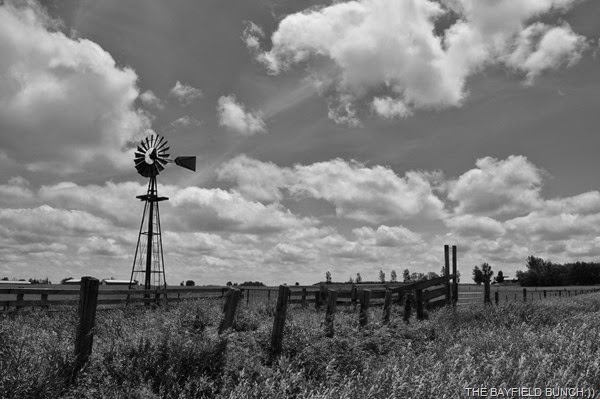 Might sound like I'm getting a little of my usual summer time hitch-itch but actually I'm doing better than in the past bunch of summers & I think it was that little trip up to the Bruce Peninsula & over to Spencerport New York earlier this month that has been instrumental in staving off that urge.  My country Jeep drives with Pheebs are also a big help as well.  But knowing myself as well as I do I’m sure that danged South-West hitch-itch will come knocking soon enough……………………….. 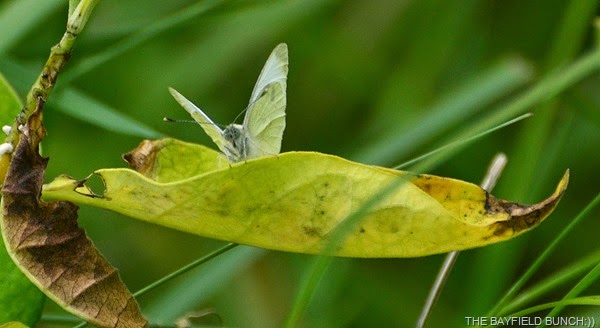 GROANER'S CORNER:((  A little boy and his dog were waiting outside a veterinary clinic. When asked if he was there to see the doctor, he replied, "Yes, I'm having my dog put into neutral."

One day at the veterinarian's office where I take my cat, a man and the receptionist were verbally sparring. After a few moments a technician came to her co-worker's defense. "Sir," she interjected, "do you know what happens to aggressive males in this office?"

A father and his small son were standing in front of the tiger's cage at the zoo. The father was explaining how ferocious and strong tigers are, and junior was taking it all in with a serious expression.  Dad," the boy said finally, "if the tiger got out of his cage and ate you up ..."  "Yes, son?" the father said expectantly.  "What bus should I take home?"