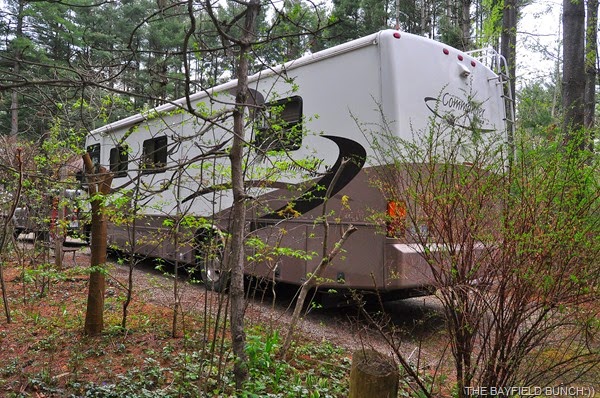 Had myself an exercise in frustration this morning.  After week's of waiting for a phone call to come pick up the Motorhome Don phoned this morning saying, "Motorhome's done & ready for us to pick it up".  Great news:)))) Only one problem, Kelly had headed off to Goderich about an hour earlier & I could not remember or find the cell phone number to call her.  I knew we had a big rain front headed our way & time was important if we were going to get over to Cambridge & get the rig back before the rain nailed us.  I didn't want to start off by having a big road grime clean up job on the coach. 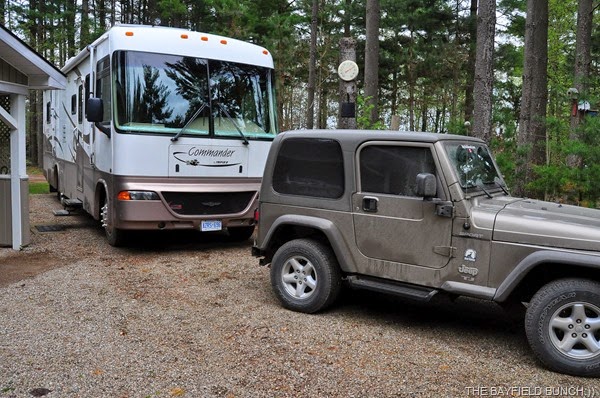 OUR BIG RV PARKING AREA  IS FILLED & OUR DRIVEWAY IS LOOKING NORMAL AGAIN
I searched high & low for that darn cell phone number but to no avail.  Nothing written on piece of paper near the phone, nothing in my little book I carry, nothing in our phone address book.  We had changed cell phone companies before leaving Congress & I just never remembered to write it into my shirt pocket book.  Fortunately Kelly had stopped in at Deer Park Lodge & before heading for Goderich she phoned home.  Soon as I told her the Motorhome was ready to be picked up she made a U turn on the highway & headed back.  Twenty minutes later we were in the Jeep happily heading for Cambridge. 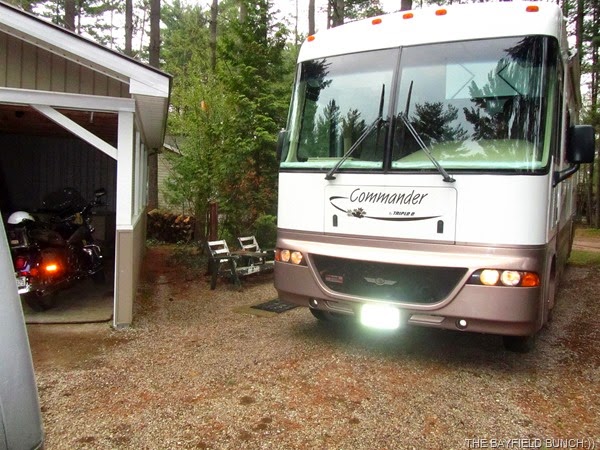 SHE’S IN HER SPOT

It was about 1:25 in the afternoon when we reached the campground  where the rig was parked & Don was outside laying out the attachable sunroom to show us how it all went together.  We did a walk around off the coach as well as Don explained all the workings.  There is a lot more to learn with this coach because of all the upgrades & accessories.  Even though we have been RVing (Snow Birding) for 8 years we had not come across some of the systems & features this coach has.  I felt like a Newbie as Don pointed out this & explained that.  In the coming days & weeks I will take photos & try to explain how things work.  Good luck AL!! 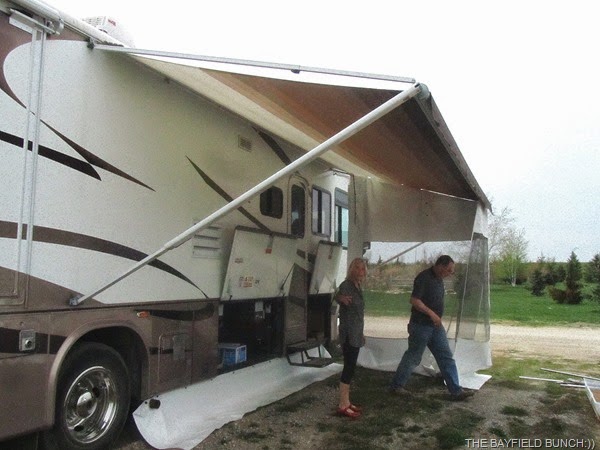 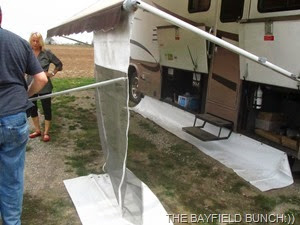 We had noticed in the past weeks that several times we contacted Don he was at opposite ends of the country.  One time Vancouver & a short time later he was in Halifax.  We couldn't figure out what kind of job this fellow had.  We guessed a company owner & President.  Maybe a traveling CEO.  With Don's meticulous nature, obvious intelligence, inventive nature, & particular attention to detail & overall handyman/craftsman skills I figured his job had to be something special.  And I was right.  Kelly finally asked Don what he worked at & when he told her, all those above things fell immediately into place for me.  I understood right away why the coach was in such great condition.  I understood why Don has done all his own maintenance including the installation of the whole solar system.  I remember him telling us he does all the work himself because he wants things done right.  In Don's line of work all things have to be done right & he has to be meticulous with a keen eye to attention & detail.  No room for doing things half right.  In other words no room for error.  Don is a pilot who flies from one side of Canada to the other for Fed-Ex.  I meant to ask him what kind of plane he flew but I'm assuming it's one of those big Fed-Ex jets like we've seen parked at the Indianapolis Airport when we used to go by there on our way south a few years back. 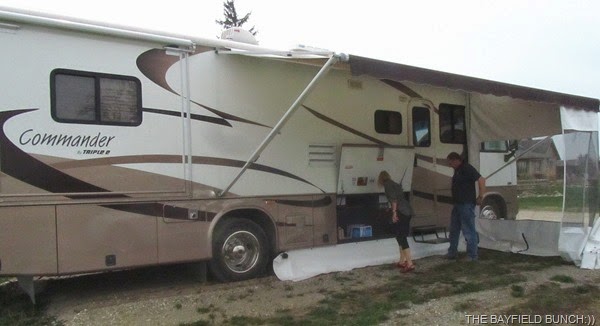 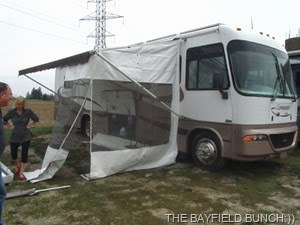 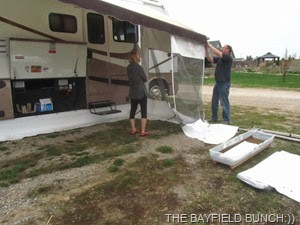 We did a tour of the coach's interior going over all the systems etc.  Paperwork was done, I put the hitch on the back of the coach, wheeled it out & hooked on the Jeep.  With a handshake & hearty Hi-Ho Silver we were off.  But we didn't get far before we totally embarrassed ourselves.  And that embarrassment began with me misreading one of the instrument panel gauges for starters. 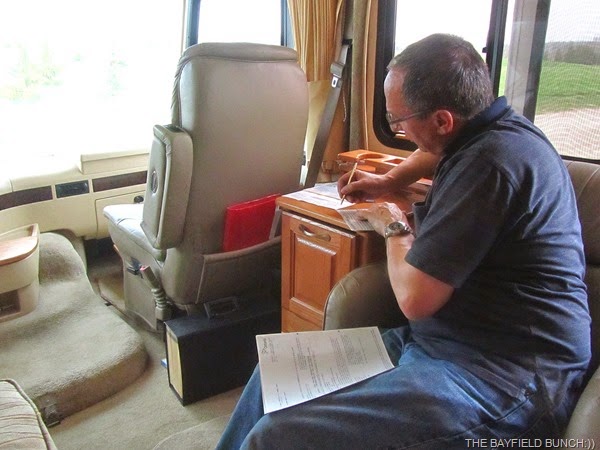 DON SIGNS OVER THE OWNERSHIP

Pulling out of the campground onto the paved road I glanced down at the fuel gauge & saw there was a quarter tank of gas in the rig.  I knew that was not enough to get us back to Bayfield.  We had spotted a Flying J on our way to pick up the rig so about 5 minutes later that is where we stopped for gas.  But.......try as we may we could not get the locking gas flap open.  We were familiar with these types of locks, had the right key but we could not get it open.  Both of us tried & tried.  Nope!!  Well how embarrassing was that because now we had to call Don & hope he wasn't too far away.  He had just opened that gas flap for us not an hour before.  Don said it would take him about 20 minutes to reach us but was befuddled why the door wouldn't open.  In the meantime I had moved the coach away from the gas pump.  We both continued to trying everything we knew until Kelly finally tried putting the key in only part way......and that worked.  Feeling rather silly we called Don back & said we were Okay.  Well actually we weren't & in few minutes we were again feeling like the Boobsters. 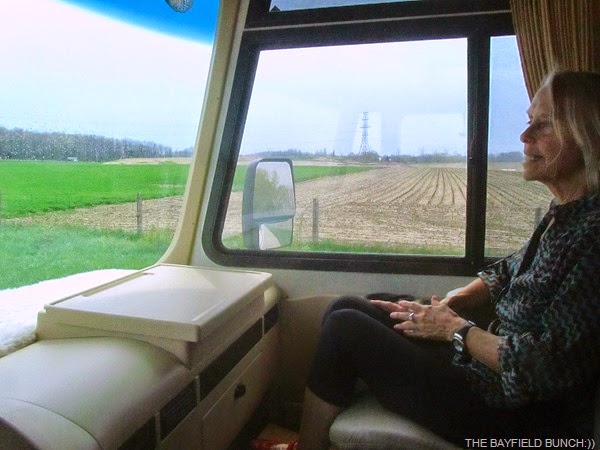 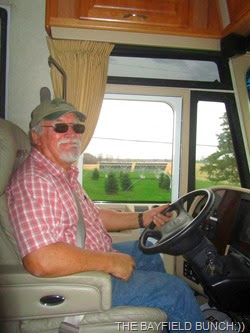 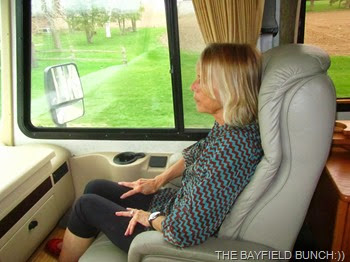 I had motored the coach back up to the pump again & we had not locked the gas flap in case we would have trouble again.  Kelly does the pump thing with her credit card & all I have to do is screw off the gas cap & pump some fuel in.  Simple eh, well nothing’s ever simple for this guy!!  Gas cap would not come off!!  Both of us twisted & turned that dam thing but no way was that cap coming off.  Oh no, how embarrassing is this going to be if we have to re-call Don back.  Then I noticed a very small hard to see rectangle in the middle of the cap.  Holy smokes it's a locking gas cap as well.  Spotted another key on the key ring beside the key that said gas.  Tried that other key & sure enough it fit the slot but we still had to fumble & bumble for another 20 seconds to get that cap off.  Of course you realize everything is normal with the coach so far & the problem is not with the rig, the problem is with the Clampetts who just bought it.  Everything has a knack to it & we will just have to get our knack in line with rigs knack & we will be just fine.  So.....were we fine now??  Nope!! 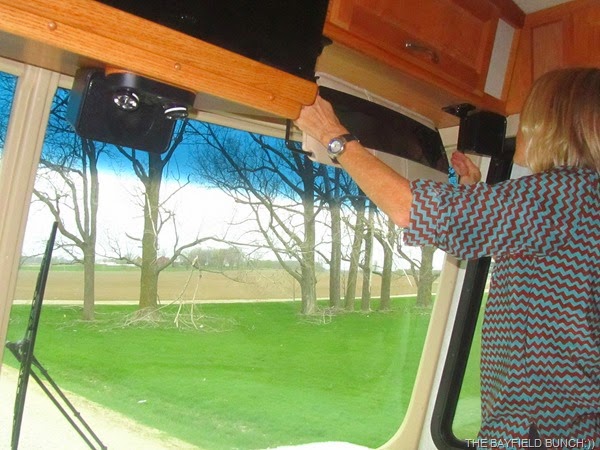 KELLY WORKS ON FIGURING OUT HER SUN VISOR, MINE IS AUTOMATIC…NEAT-O:))

I decided to put in about $70.  I didn't want to fill it & have the rig sitting at home with all the weight of a full gas tank (75 gallons) for the next month or two.  Soon as I started pumping gas & put the handle all the way in the pump would click off.  Awwww nuts now what!!  It kept doing that as if the gas tank was full.  You know how it automatically shuts off when the tank is full.  I did manage to get my $70 in though but it took me a little longer than usual to do it.  Had to keep manipulating that squeezy trigger.  We had a Ford Class C way back in late 04 that had some kind of a problem to get fuel into & this reminded me of that.  Now you would think I would have clued into something rather obvious by now right?  Wrong, & it wasn't until a few minutes later while sitting in the coach waiting for Kelly to return with a cup of Flying Jay coffee (mud) that I happened to glance at the fuel gauge again.  What the !!!!!!!!!  The gauge was now showing full.  How could that be????  Then I saw my mistake:(( 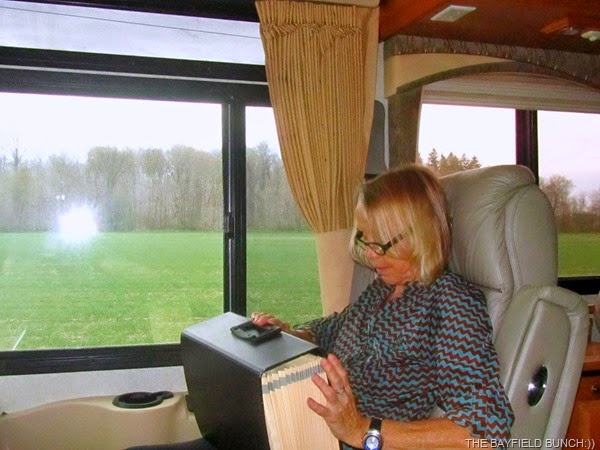 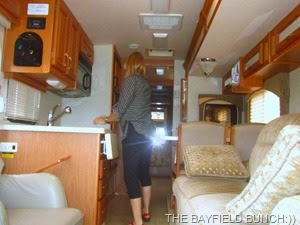 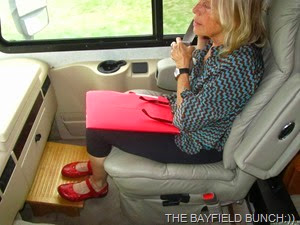 NOPE NO EGG SALAD SANDWICHES FROM THE GALLEY YET The gas gauge in the Jeep reads full on the right & empty on the left which means the needle shows it's full on the right side & empty on the left side.  I think the Winnie gas gauge might have been the same.  I had mis-read & confused the gauge with the Jeep but something else contributed to my mistake as well.  In all my years of buying vehicles (well over 40 now) nobody had ever left anymore than a quarter tank of gas (if that) in any one of the vehicles.  My brain being pre-programmed to that just automatically & hastily saw that gauge with only a quarter tank of gas remaining.  Good thing I'm not a pilot eh.  And speaking of pilots you can see how Don had thoughtfully left the rig with over three quarters of a tank of gas.  A responsible pilot like Don would never leave an aircraft with a quarter tank of gas knowing another pilot was coming to fly it.  Happened to singer John Denver though & that is how he died.  So a big thanks to Don for being so considerate but oh how foolish Kelly & I felt & especially me for making such a dumb mistake.  Anyway we finally rolled out of the gas station & headed for Bayfield.  With very sheepish looks on our faces I might add………………………. 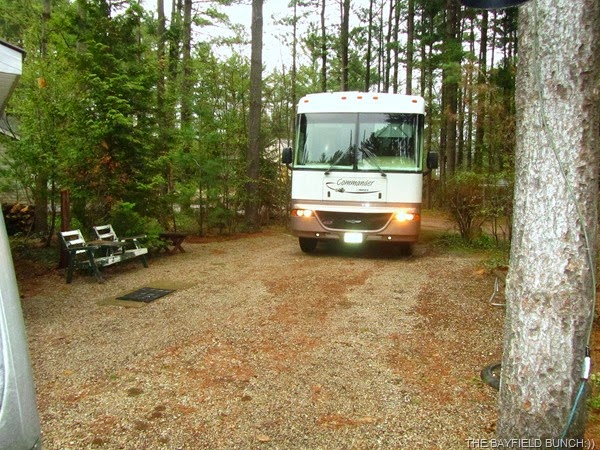 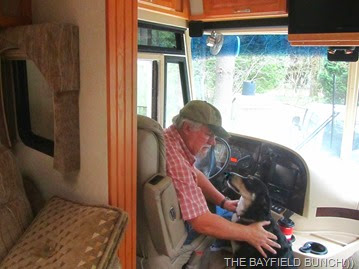 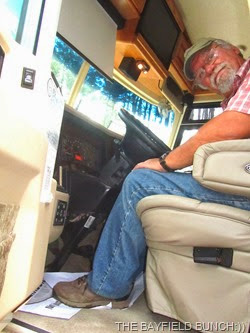 WITHIN SECONDS OUR EXCITED LITTLE PHEEBS WAS OUT OF THE HOUSE & INTO THE RIG…OF COURSE SHE WASN’T THE ONLY EXCITED ONE:))

I am soooooooooooooo pleased with how well this coach drove on the way home but I will write more about that tomorrow because it's getting late & when we arrived home around 6 p.m. tonight a message on our answering machine had me scrambling like crazy.  One of the main reasons I was anxious to get this coach home was all the RV stuff piled up in our carport that had come out of the Winnie.  We've been stumbling over & around this stuff for the last couple weeks or so.  Wanted to get all this stuff organized & out of the carport into the Big EEE before the guys came to dig out our carport in preparation for laying in a concrete pad.  Well guess who was on our answering machine??  Yep, it was the cement guys saying they would be here at 8 a.m. in the morning so have everything out of that carport.  With distant thunder out over the lake & rain on it's way I hardly had the rig parked before I was racing around getting everything out of the carport.  Motorcycle moved & covered, bicycles, garden tools, the Santa Fe, all the RV stuff had to be picked up & moved to the storage area.  Hooked the utility trailer to the Jeep & pulled it out & parked it on the road out front.  Left the Jeep out there too plus the Santa Fe.  Moved the rig back about 6 feet so everything’s good for the morning.  A late supper & here I am.  And here I go.......zzzzzzzzzzzzzzzzz.  An excited little Boy tucks himself in tonight with a wee smile on his face:)) 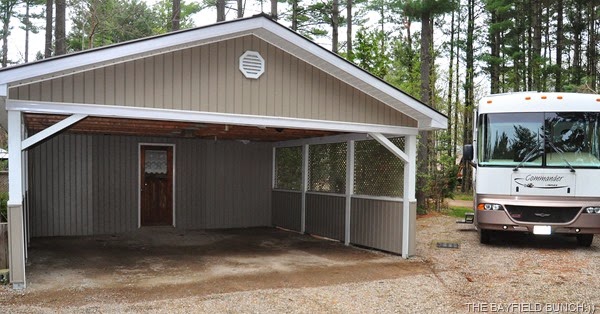 GROANER'S CORNER:))    Most of us have a bad habit we are constantly trying to break. For me, it's biting my fingernails. One day I told my husband about my latest solution: press-on nails.  "Great idea, Honey," he smiled. "Now you can eat them straight out of the box."