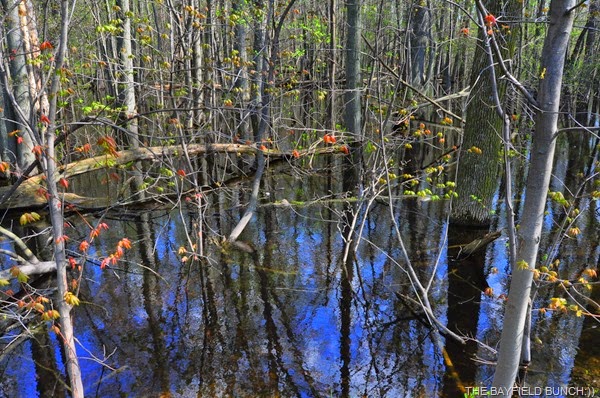 A mixture of sun & cloud this morning but enough sun to get little Bugsy & I into the Jeep & out into the countryside for a nice Sunday morning drive.  Air was a bit cool but no wind so we were able to get out & do a bit of exploring around at a few of our favorite places.  A stop in Goderich on our way home netted me a tote bin for the rig, some paint for a little project & a few 'quick connect' pieces for hooking up a garden hose to the rig.  I always seem to have problems threading a garden hose onto water faucets so that quick connect stuff makes it much easier & keeps my short patience fuse from launching me into orbit. 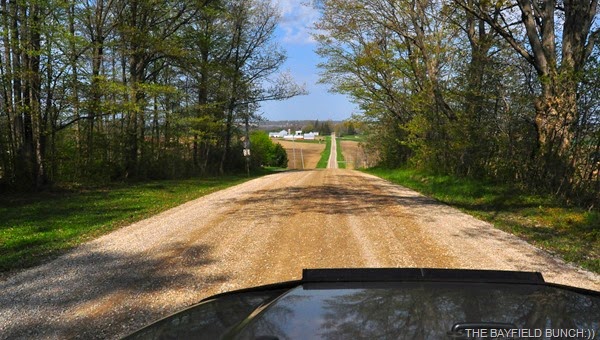 OUR TREES ARE BEGINNING TO FILL IN:)) 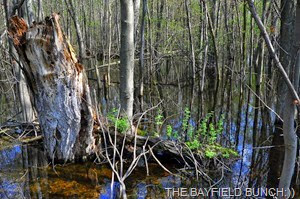 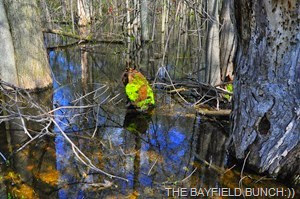 STOPPED ALONGSIDE A SWAMP FOR A FEW PHOTOS
We spent some relaxing time in the rig Saturday just sitting around with some nice music on the stereo revelling in all the comfortable space we now finally have.  With 2 full sliding wood doors between the living room & Kelly's bedroom (bathroom in between) the set-up is perfect for us.  The living room television or stereo isn't going to bother her later at night.   Pheebs & I can watch Family Guy.  And again we marvelled at the overall brightness in the coach with natures outside wonders beaming through our big windows. 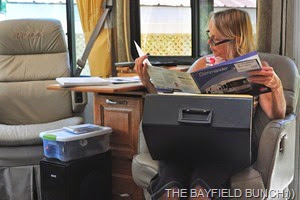 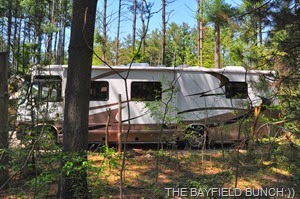 KELLY READING UP ON OUR36’ 2003 TRIPLE E COMMANDER
We somehow bumbled our way through the rig's de-winterizing process today as well.  Seemed to be the usual grumbling on my part, turning of valves & levers & shouting back & forth, 'is there any water coming out of that tap yet'?  Had to refer to the book half a dozen times but after nearly half an hour we finally had some H20 flowing freely from all the taps.  Previous to that I had even managed to keep myself reasonably dry while loading in half a tank of fresh water.  Didn't even have to put on my rubber boots, snorkel & water wings. 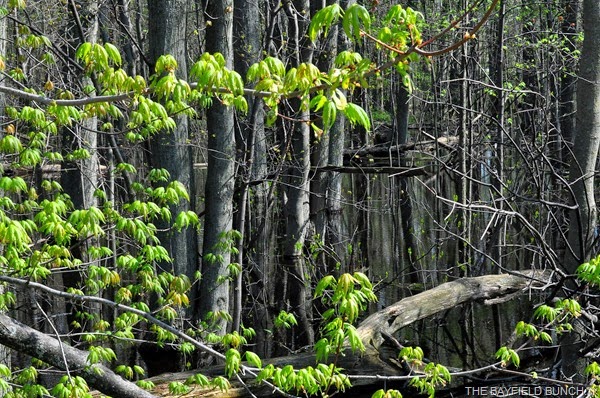 With a reasonably normal amount of difficulty Kelly figured out how to turn both the drivers & passenger Captains seats around.  I stayed out of that one except for  when some extra oomph was needed to leverage the swivel.  I did manage to figure out how to retract her sun visor for her a few days ago so I was able to score a few points with that one. 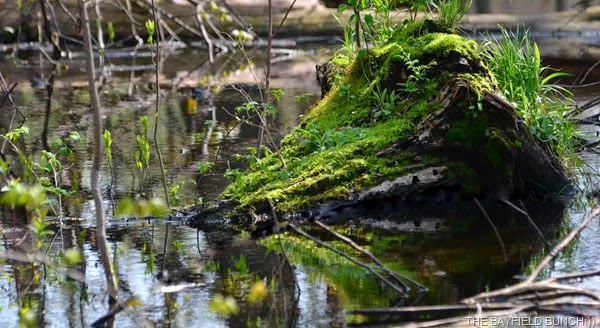 We have hydraulic levelling jacks on this coach & I kind of have a love/hate relationship with those things.  It's a better system than our Damon & I've had to do some reading on their operation.  Hydraulic jacks do have their pluses for sure....as long as they work properly. 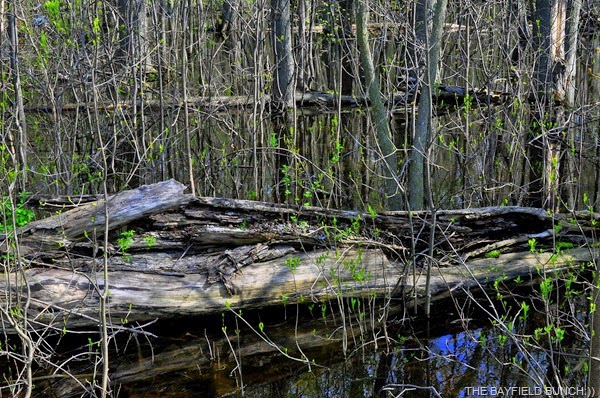 For whatever reason every day last week felt like a Saturday.  Week days have been melding together on me for quite awhile now & I think that is natural for anyone stepping away from the workforce after awhile.  Dates & times become less important as a once necessary awareness takes on less importance.  I'm still very time conscious but with my week-end days now merging with my week days I find myself increasingly having to ask, 'what day is it today'?  Saturday, right...... 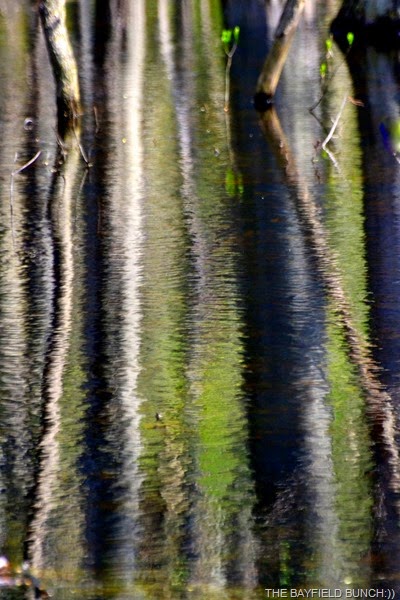 Saw a question in our Shout Box while writing tonight’s post.  Question asked: “Why do so many RVers own a dog, cat or both”?  My answer to that question is simply, ‘because it is the type of caring people we RV folks are.’  When we began RVing back in 06 we had 3 dogs & it never entered our minds once that our 3 beloved family members would not be traveling with us.  And I emphasize the words ‘family members’ because that is exactly what our best Pals are.  Pets bring endless hours of love, affection & entertainment for us.  Whether we be out traveling or not they get us out for walks, remind us when it’s breakfast time & keep our laps warm on chilly nights.  They give life meaning.  And they give us a purpose for getting up in the morning & a contented reason for going to bed at night.  In their own way which sincere & caring pet owners understand they communicate with us & us with them.  It is a special bond like no other.  Our pets are our life.  Take away my best Pal & you take away my heart. 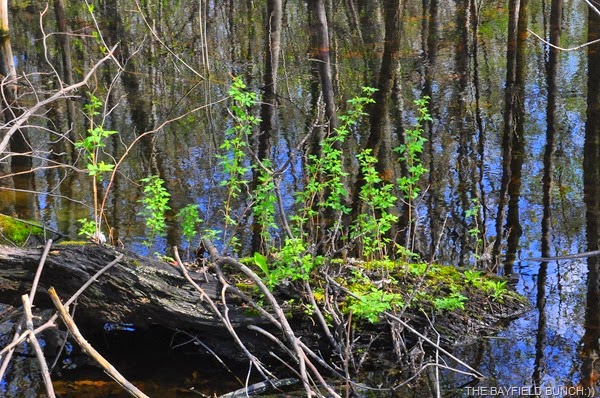 I have started my second Kindle book & have decided to stick with the fact based issues of UAP's (Unidentified Aerial Phenomenon) commonly referred to as UFO's. (Unidentified Flying Objects) Fascinating stuff for many of us.  This one is entitled, "UFO's: Myths, Conspiracies, and Realities” by Col. John Alexander.  Thanks Kevin M:)) 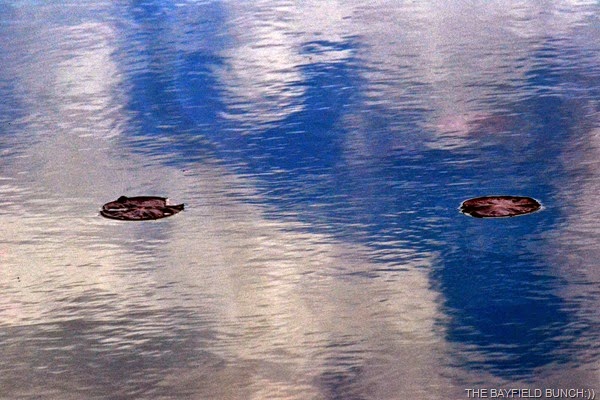 NO NOT UFO’S…….JUST A COUPLE LILY PADS FLOATING ACROSS A SKY REFLECTION
Looking forward to having some warmer weather move in Monday.  Up to 70F inland they say but of course cooler here along the lake which I'm thinking still probably has ice on it out in the middle regions.  We will probably be lucky to reach 60 but no matter, 60 is good:)) 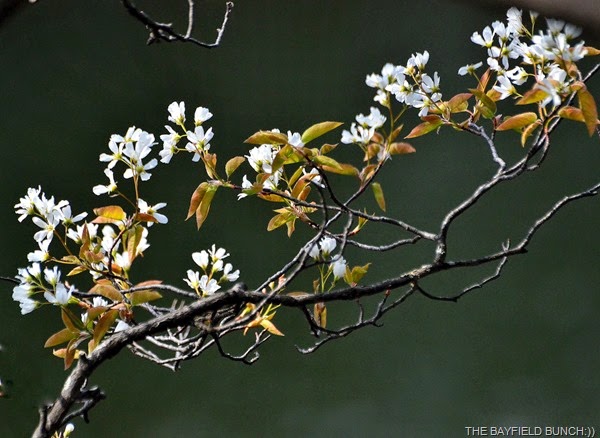 GROANER'S CORNER:((    A man was in bad shape. He constantly gasped for breath and his eyes bulged. The doctors didn't give him long to live. He decided to live it up. Withdrawing all of his money from the bank, he went on a shopping spree. His last stop was at the most expensive haberdashery in the city. He pointed out a dozen silk shirts. He wore a size fourteen.  The clerk said, "Your neck looks bigger than fourteen. You need a sixteen."  The man said, "I know my size. I want them in a fourteen."  The clerk said, "I'll get them for you, but I want to warn you...if you wear a fourteen you'll gasp all day and your eyes will bulge."