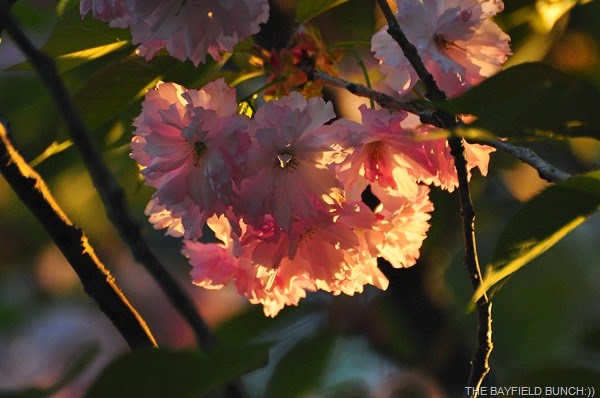 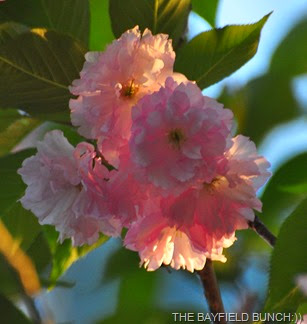 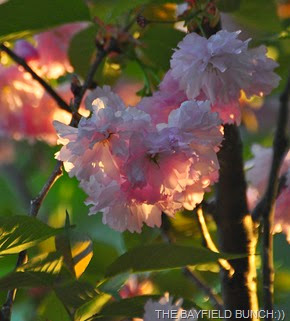 The bulk of my entire morning was spent on the working end of a shovel first digging up plants then digging them back into the ground in a different location.  I liked a thick stocked bamboo looking plant our neighbor had planted along his fence line for privacy.  Said he dug it up in a ditch less than a mile from where we live.  With directions in mind I set off in the Jeep & dug me up over 30 plants.  Forgot to take a pic of the plants but I will be going back for more.  Took me awhile to get them all replanted & watered around our property but if all goes well they should form an additional heavy growth of vegetation around us.  Humidity was up by the time I finished planting & that drove me back Into the house & right into the shower.  From there it was off to my recliner for a few zzzzz's in front of my stack of 3 cooling fans.  We held off from hitting the A/C button. 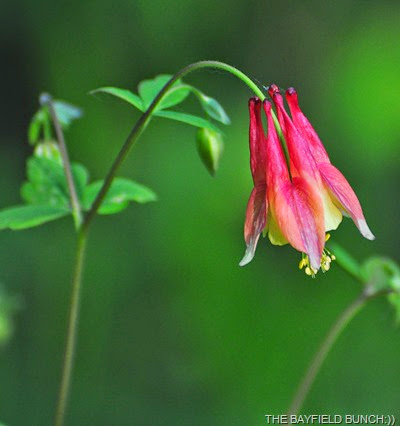 I did manage to remember a few questions from readers tonight.  The  last photo of flowers in Monday night's post are Primrose………  Someone asked about the windmill in my POST about the WINDMILL LAKE WAKE & ECO PARK near us.  At the moment that windmill is in a state of disrepair but the new owners of the property have plans to restore it back to it's original state.  I remember years ago when it was a tourist attraction & tour buses would make stops at the mill.  It was operational & I understand it had a gift shop.  I know a Dutch family lived on this large piece of scenic property years ago & I am assuming they were the folks who built it……..  And I sorta recall another reader asking if there were free places for boondocking here in this area of Canada.  Unfortunately we do not have those nice big free BLM (Bureau of Land Management) areas like the South-Western States.  It will be a real challenge for us locating places to stay & I'm just not sure how we are going to handle that yet.  As long time readers know we prefer to stay away from RV Parks.  Kelly did phone one National Park called CYPRESS LAKE NATIONAL PARK but RV sizes are restricted to 26' there.  Too bad because we have been to Cypress Lake before & really liked it………  Remember, if you have asked me a question & I haven't answered it please don't think I am ignoring you.  I just have a very frustratingly short term memory & have a habit of simply forgetting to answer.  Happens to me with emails as well. 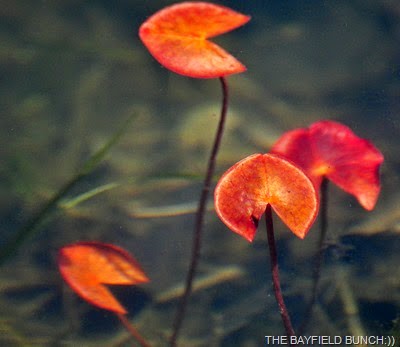 THESE UNDERWATER LILY PADS HAVEN’T QUITE REACHED THE SURFACE YET >>>

And speaking of forgetting here is a good example of how my mind works.  Last week I was taking some photos in the rig & around our carport.  I was using the flash on my camera & when I do that I have to remember to take the lens hood off my lens or the flash casts a shadow across the bottom of my photos.  Amazingly enough I did remember to take the hood off for a change & I distinctly remember unscrewing it.  That was about 7 or 8 days ago & I have not seen the lens hood since.  I remember taking it off but have zero recollection as to what I did with it only seconds later.  I have gone through shirt & pants pockets, jacket pockets & nowhere is that lens hood to be found.  If I had laid it down I would have found it by now.  Only logical explanation is that it was beamed up immediately after I removed it from the lens by a passing Alien spaceship.  If I ever find that shade again I will let you know where I found it or if that Alien spaceship decides to beam it back to me again I will let you know about that too:)) 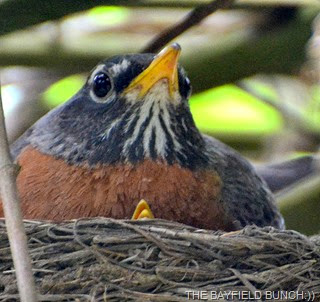 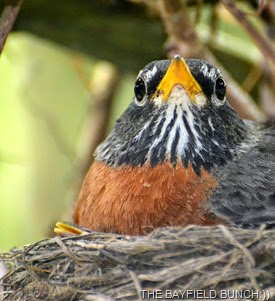 CAN YOU SEE THE HUNGRY LITTLE BABY ROBIN BEAKS
Bob from THE CARETAKER CHRONICLES made a good point in his comment on my Monday night's post when he in part said, "Most RV folks tend to claim that whatever they're driving is just about the best they've ever had. Well, mostly".  I have found that to be the case over the years as well.  If someone didn't think it was the best RV then why buy it.  Sounds nice in theory but most of us are not in the position to order a new rig from a factory custom built to our own likes & preferences.  Over the years any rig we have ever had I always trot out the ‘what it is I like about it’.  All the pluses, all the positives.  Readers of my blog also know I trot out the negatives as well & there are always some negatives.  Unless you live in a perfect world of course.  I came across a good example of that this morning with the Triple E.  On all our RV's the rear ladder was full length & could be easily accessed from the ground.  I have always liked that.  Decided to slip up onto the rig's roof this morning for a first close up look around.  Before I could do that I had to attach another ladder to the rig's already attached ladder.  You see these partial ladders on a lot on Diesel Bangers so you have to carry another ladder attachment along in one of the bins.  I don't like that ladder attachment idea.  I suppose it's done that way so Cows wearing horseshoes, clumsy climbing Chickens, oogling Ostrich's, rambunctious baby Elephants, & salt water Crocodiles can't climb up the ladder & stomp around on the roof at night keeping everybody awake inside. 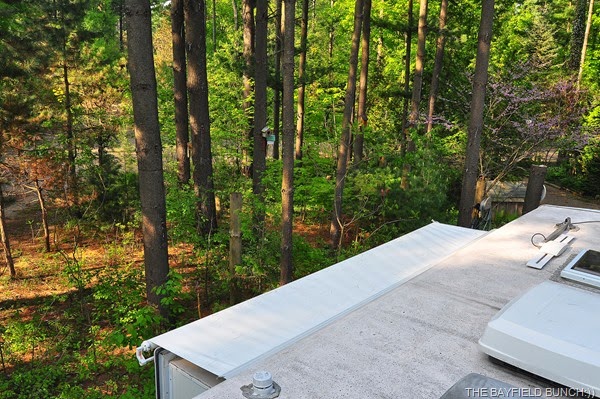 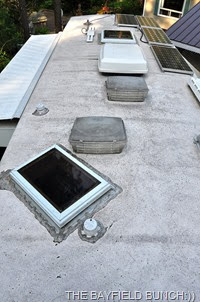 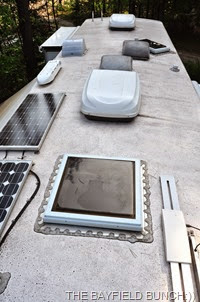 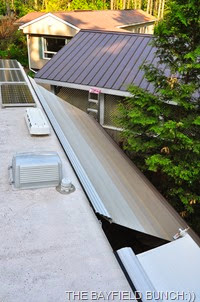 ON THE RIGS ROOF LOOKING FORWARD, REAR, & OFF TO THE AWNING SIDE --- ANGLED SKY LIGHT IN FIRST PHOTO IS OVER THE SHOWER & THE LIVING ROOM SKY LIGHT IS VISIBLE IN THE FOREGROUND OF THE SECOND PHOTO --- OTHER DARK RECTANGLES ARE SOLAR PANELS 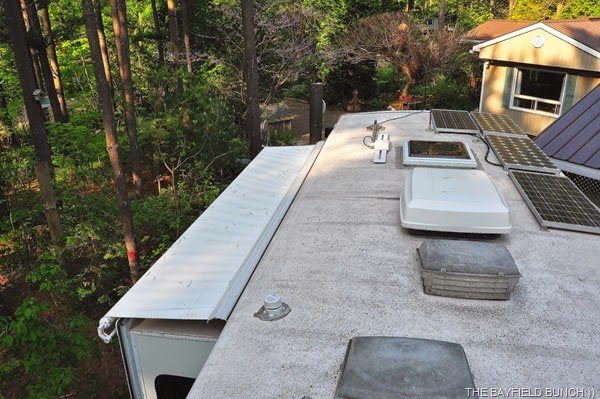 The power awnings on the Sunseeker & Winnie Wagon really totally spoiled us & the manual awning on the Triple E seems like a Dinosaur to handle compared to the power awnings.  But of course we are used to those big manual awnings because that was what we had on our Damon Class A all the 6 years we owned it.  I really liked how the transmission automatically geared itself down on steep grades in our Class C Winnebago Ford V-10.  As I recall that has to be done manually with the Chevy transmission.  Liked how we didn't have to mess with the levellers to get our slide out in the Damon too.  Not so with the Big E but I think I just discovered Monday that the jacks or a single jack does not have to be all the way down for the slide to work.  I have recently written about all these things & as I come across more comparisons whether positive or negative ‘in my opinion’ I as always will write about my thoughts right here in the blog.

GROANER'S CORNER:((  The co-ed came running in tears to her father. "Dad, you gave me some terrible financial advice!" she cried.  "I did? What did I tell you?" asked the dad.  "You told me to put my money in that big bank, and now that big bank is in trouble."  "What are you talking about? That's one of the largest banks in the world," he said. "Surely there must be some mistake."   "I don't think so," she sniffed. "They just returned one of my checks with a note saying, 'Insufficient Funds.'"