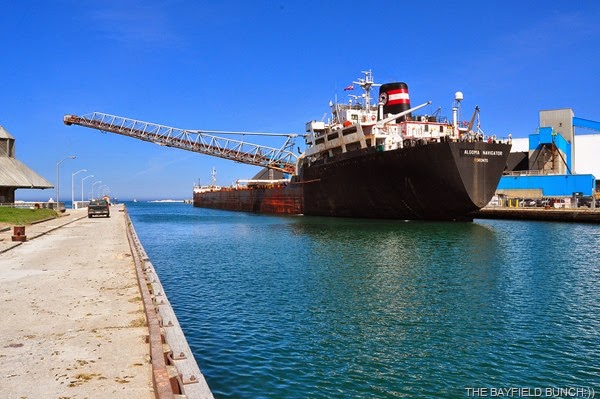 GODERICH HARBOR THIS MORNING
In Wednesday's post I had a couple pics of an unidentified jet aircraft I saw heading slow in a northerly direction over Bayfield.  Tom thought it might be an L-39 Jet Trainer & Cyndi sent the following comment, 'The aircraft is called a Galeb/Jastreb, manufactured in Yugoslavia. It's used by these countries: Bosnia-Herzogovina, Burma(Super Galeb), Libya, Yugoslavia, Zambia. I have no idea what it is doing in Canada. Here's an article that shows the silhouette: SOKO J-21 JASTREB………. I was curious this morning to know if that small Jet had indeed landed at Goderich's Sky Harbor airport so without further ado Rascal Buns & I were in the Jeep headed for Goderich.  I was running low on my favorite natural peanut butter found only at Zehrs Supermarket so that was our first stop.  Next was a gas fill-up followed by a tour down around the harbor.  Two big freighter’s loading salt & another one inbound a couple miles out.   From there we headed for Goderich’s Sky Harbor Airport.   Although it has actually been closed for awhile now the runway is still operational I think & I did see 4 cars at the terminal office.  One small prop plane sitting off to the side but no sign of any small Soko Jet. 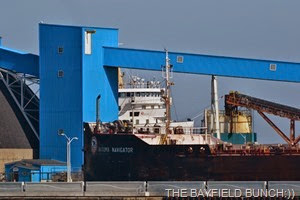 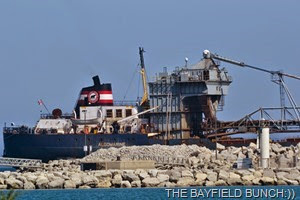 A cool weather front blew all our humidity out of town & the last couple of sunny days have just been great.  Pheebs & I meandered our way up through Mennonite country for a few hours just taking in all the beautifully peaceful rural countryside.  Farmers were busy on the land fertilizing & planting.  Horses & cows in the fields.  All the hardwood trees have filled in & the bush lines are vibrant with colors of green, green, & more green.  Everything looks so fresh.  One of our nicest months of the year is just about upon us.  June it seems is when most everything seems to be so lush & full.  We stopped in a swampy area & were able to walk around without any bugs or mosquitoes bothering us.  I suspect that will end very shortly.  We had left at 9 this morning & we were back home just before 1 p.m. 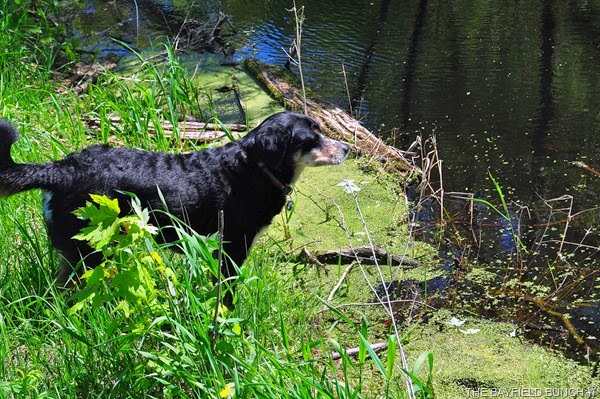 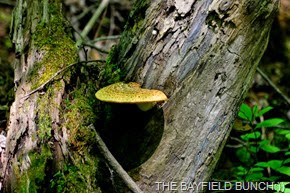 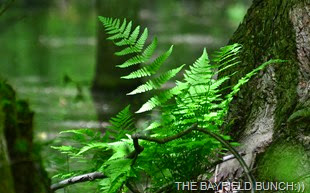 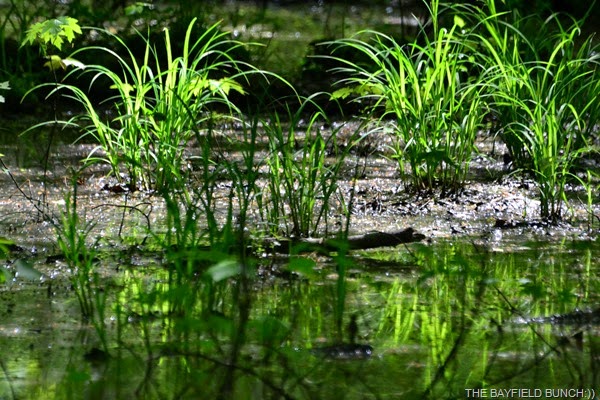 A FEW SWAMPY SCENES
Want to thank folks for the emails, shouts, & comments regarding all the various cleaning solutions & ideas for bringing back the shine on our rig.  Much to think about & research.  Some products seemed very involved while others seem to offer an easier way.  I guess it is just going to depend on how much effort I want to put into this.  I do know that if I am going to try & restore at least some of the shine I have to do it now before my interest & attention fades along with the finish.  Now if I was a rich guy I would just take the coach & have it professionally done somewhere.  But I'm not so I can't.

ALWAYS A TREAT TO DRIVE UP THROUGH MENNONITE COUNTRY
And also another word of thanks to readers for their concern about my planting of what we thought was Cow Parsnips.  After an email from Linda K with this JAPANESE KNOTWEED link I decided to err on the side of caution & pull out all 30 plants I had dug into the ground just a couple days ago.  I loaded them in the Jeep, drove down the road & deposited them in the very spot from whence they had come.  Do you know that the weed control center here in our county even has a hot line for that Japanese Knotweed.  Kelly phoned the number & a real person actually answered.  Kelly gave them the location of the Knotweed so I suspect the Weedwhackers Swat Team will swoop in & eradicate that patch.  Too bad in a way because I really liked the looks of the plant & how it tightly filled in offering a nice privacy hedge.  But it’s another fine example of how beneficial a blog can be.  Had it not been for reader’s concerns we might have had Japanese Knotweed growing out our ears. 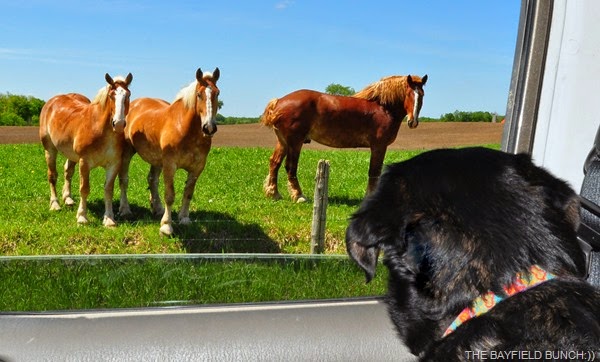 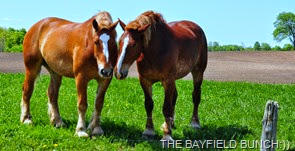 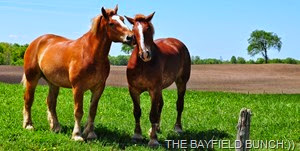 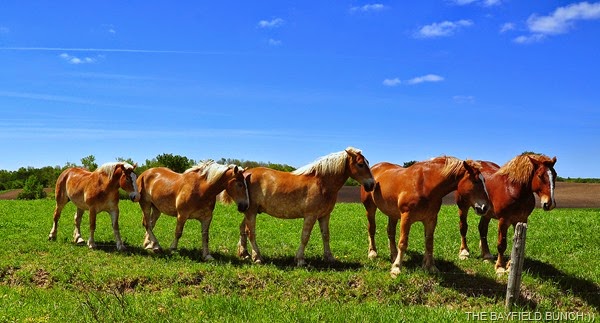 (Now the following paragraph is a prime example of not putting the cart before the horse or not guessing at an aircrafts power source before checking your own photos.  I wrote the paragraph before I downloaded the photos)  Again today while Pheebs & I were out on our country tour I heard the sound of an approaching jet aircraft & again this one was lower than normal.  He had the power on & I was able to catch a quick shot of him before he banked left over a distant forested horizon.  Appeared to be descending & again it was headed in the direction of Goderich.  Hmmm, wonder what's going on around here. 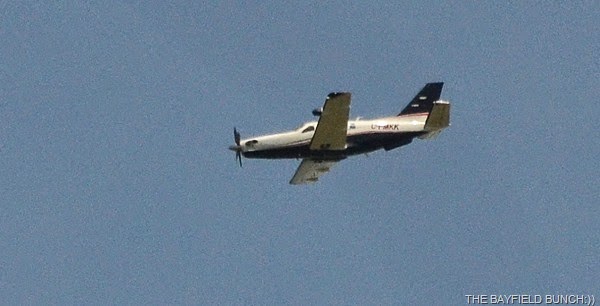 NOTICE THE PROPELLER ON THE NOSE OF THIS PLANE…SO MUCH FOR ME THINKING IT SOUNDED LIKE A JET COMING…GOES TO SHOW HOW MUCH I KNOW ABOUT ANYTHING EH
Best news of the day is that our Santa Fe is finally out of the garage & back home in our carport.  Can you imagine the surprise on the little Santa Fe's face when I drove her into the carport onto a cement floor:))  The clutch problem was an expensive fix but not as expensive as it could have been had we had opted for a new flywheel.  The Santa Fe is 11 years old & Don at the Bayfield Garage didn't feel the car warranted that kind of expense.  We do have a new clutch though.   I drove it home from the garage & the clutch seemed to work perfectly so we'll see if we can get away without a new flywheel.  The Santa Fe is only used 6 months of the year & now that Kelly isn't working at Deer Park Lodge any more the car will not be used every day.  It would be nice if we could get a couple more summers out of our Hyundai because overall we really do like this solid little car. 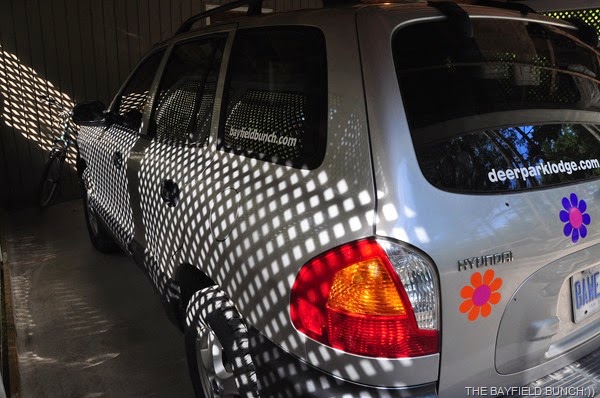 GROANER'S CORNER:((     When my son was in the ninth grade, we reluctantly agreed to let him move into the basement. Then I realized how convenient it was to get him to the breakfast table. Before, I used to stand at the bottom of the staircase and scream his name. Now all I had to do was flick the basement light off and on, and he was here.  One morning I flicked the switch, and nothing happened. I did it several more times. "I'm on my way," my son called up. "You didn't have to yell."
---
At the UPS cargo phone center where I worked, a woman called and said, "I need a baseball quote."  I immediately answered with Yogi Berra's famous "It ain't over 'til it's over!"  There was a brief moment of silence before the woman asked, "What was that?"   "You asked me for a baseball quote, and that was the first thing that came into my head."   "Oh ... my husband told me to call and get a baseball quote."   "Does he want to ship something?"  "Yes."   "Maybe he meant a ballpark figure?"
Posted by Al Bossence at 5/29/2014