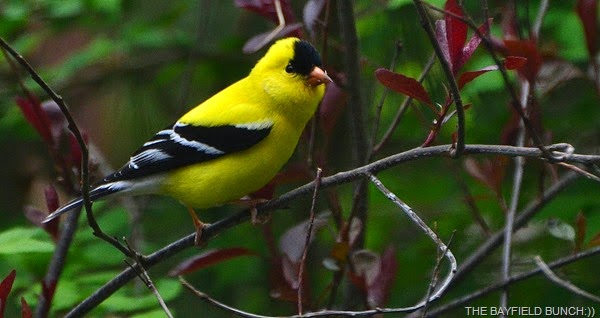 ALWAYS LOTS OF GOLDFINCHES IN OUR YARD THIS TIME OF YEAR

Well I definitely had myself a ho-hum day alright & was determined not to write a post tonight but here I am again with myself ker-plunked down at the keyboard.  My determination sometimes has a few holes in it.  Maybe it is a need for people like myself to express themselves.  Whatever it is, for the most part I do enjoy the daily challenge of attempting to come up with something remotely interesting to write about.  Sometimes it is as mundane as saying I’m attempting to come with something remotely interesting to write about.  Say, have I told you about my fear of repetition…………………………

SPRING IS DEFINITELY IN THE AIR
It was almost non-stop lightning for about half an hour late Wednesday night & the rains were torrential.  Checking live radar on my computer I could see a line of several small severe weather cells had formed up out over Lake Huron & steam rolled their way directly into & right on through Bayfield.   Our driveway looked like a lake in the lightning flashes.   Our power somehow remained uncharacteristically on for a change.  Most amazing. 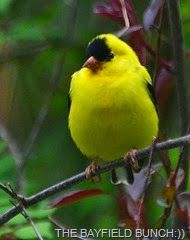 Kelly is re-thinking the vanity sale.  Didn’t appear to be a lot of interest in it plus Kelly’s youngest daughter Rebecca today said she is thinking she may like to have it.  If so we’ll hang onto it until Rebecca & husband Ricardo can slip on over to Bayfield & pick it up. 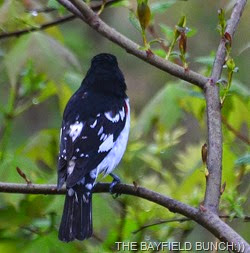 That overnight speeding freight train of a thunderstorm blew all our warm air & humidity out of town & replaced it today with cloudy & cold.  The cooler air spurred me on to finish up my little back yard project this morning.  As well I slipped on up my tall step ladder & cleaned a bunch of wet rotting pine needles out of our front porch eaves trough & that yukky job soon had me inside running my frozen hands under the hot water tap. 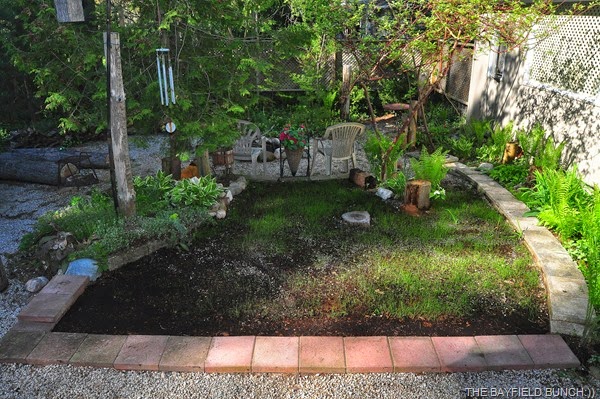 Years before we were the Bayfield Bunch we were the 'Dreamweaver's'.  In the late nineties living in an old farmhouse near Fullarton Ontario we decided on that name after buying an old & aging (think it was a 1979) 17' Class C Dodge Centurion. It was our first RV. We were very new to computers in those days but I do remember putting some kind of RV site together even then. It was probably 5 years or so before we even knew about Blogger. In fact I'm not sure if the word 'blog' had even been thought of then. I remember having a few pics on the site along with some kind of blurb. I don't think anyone ever saw it except Kelly & I but at least it was a start to something we knew nothing about. Those were exciting days & I did have a slight inkling even back then that maybe something just might come out of all that darn fancy new space age computer stuff. Digital photography was new to me & had re-newed my lapsed interest in a 35mm photography hobby I had dropped years earlier.   Traveling has always been in my blood & it wasn’t long before another long lost but not forgotten interest from years gone by made it's presence known again. Writing. Kelly's Son made up some decal lettering for us & you can see our Dreamweaver name & website on the back of our rig in the photo below. 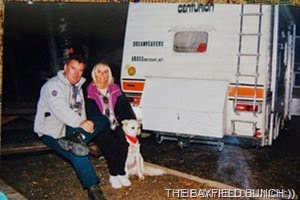 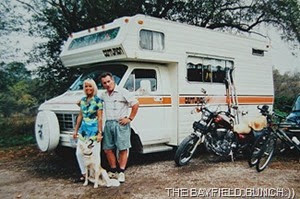 The whole RVing thing was new to us but we were eager to learn & get out there & be a part of that daring lifestyle. We began weaving our dreams into a plan & that is how our first name came about. 'Dreamweavers'. It wasn't long before large pieces of the giant jigsaw puzzle started falling into place & I began to realize how to tie all our interests of Traveling, Photography, RVing, & Writing together. Yes indeed, those were exciting days. You can see how young we looked back then & our dear boy Max was only a year or two old.  Photos were taken at the PINERY PROVINCIAL PARK about a half hour’s drive south of Bayfield.

YES WE DO LIVE IN A NICE AREA

GROANER'S CORNER:(( A guy goes into a bar. He's sitting on the stool, enjoying his drink when he hears, "You look great!" He looks around - there's nobody near him. He hears the voice again, "No really, you look terrific."  The guy looks around again. Nobody. He hears, "Is that a new shirt or something? Because you are absolutely glowing!" He then realizes that the voice is coming from a dish of nuts on the bar.  "Hey," the guy calls to the bartender, "What's with the nuts?"  "Oh," the bartender answers, "Well they are complimentary."