LONDON’S ‘UNIVERSITY HOSPITAL’ WAS OUR DESTINATION FIRST THING THIS MORNING 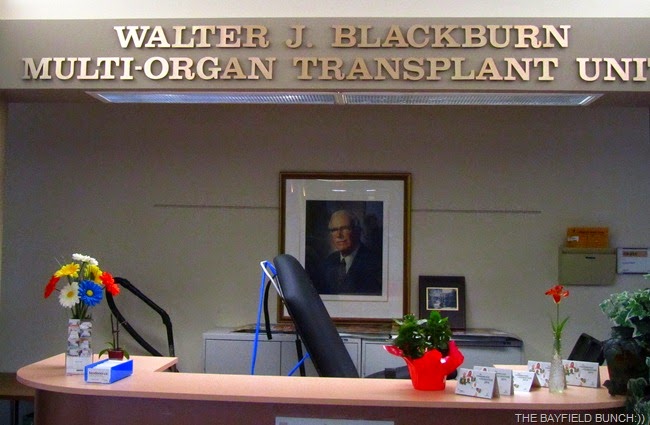 We were up a tad earlier this morning because we had to be at London's University Hospital for Kelly's Specialist appointment at 9:45. University Hospital is in London's North end & when driving for Town & Country a few years back it was a place I drove wheelchair folks to for various medical appointments. It's a big hospital complex but my Town & Country trips there over the years gave me a good idea of where it was we had to park & where it was we had to go. We were on the on the road headed for the hospital by 7:45. 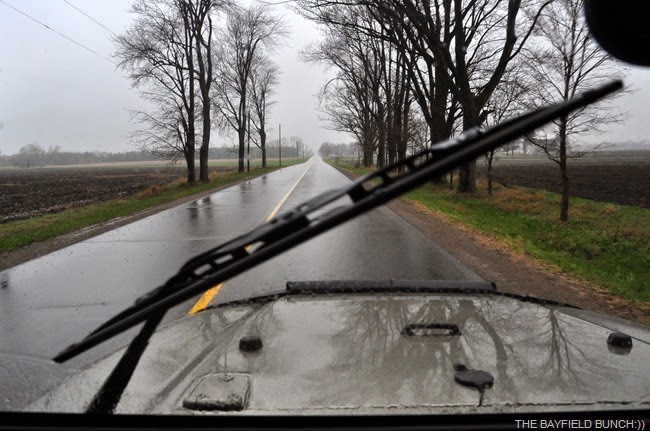 RAINED PRETTY MUCH ALL THE WAY TO LONDON & BACK
Rained most of the way to London but that’s alright at least it wasn’t snow.  Took us about an hour & some to reach the hospital & as expected the parking garage was our main obstacle when we got there.  Round & Round we went trying to find a parking spot………… Aha at last!! 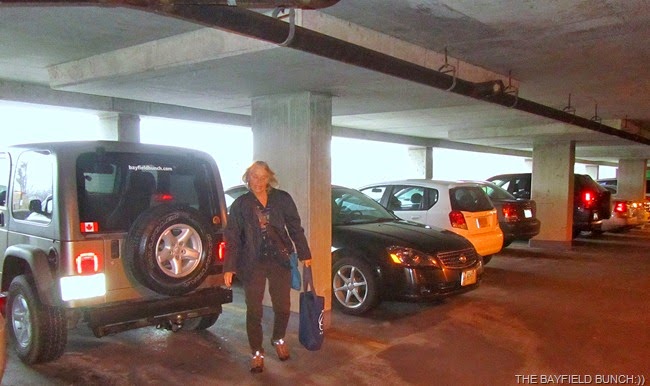 SEEMS LIKE WE DROVE AROUND & AROUND THE PARKING GARAGE ABOUT 846 TIMES BEFORE WE FOUND A SPOT
Ten minutes later found us on the third floor of London’s University Hospital seated in an outer waiting room.  We were a good half hour early & that’s the way I like to time things.  Right on que at 9:45 Kelly was called into an examining room & I went with her. 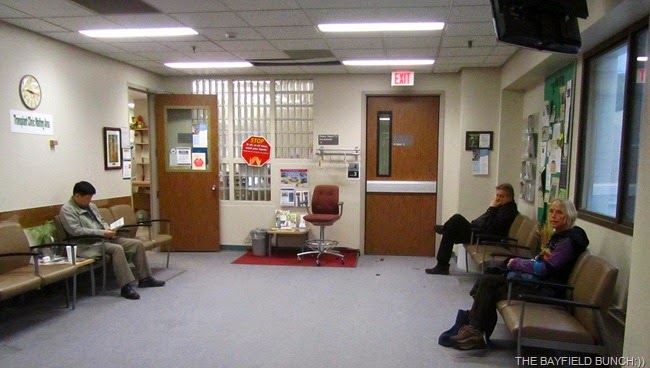 WE ONLY HAD ABOUT A 20 MINUTE WAIT IN THE OUTER WAITING ROOM
As per what seems a standard procedure a student Doctor comes in first & does all the preliminary work like asking questions, taking notes, etc.  He goes out, confers with the specialist Doctor & they both re-enter the room.  Kelly had already researched Dr. Levstik on the internet & found good reviews about him.  Patients held this fellow in high regard.  Bit of an older chap than a lot of the younger medical people we had been accustomed to seeing.  ‘Older’ works for me because one gains the irreplaceable wisdom, knowledge, professionalism, & vast experience only age can sometimes bring to the table.  Dr. Levstik had good news for Kelly. 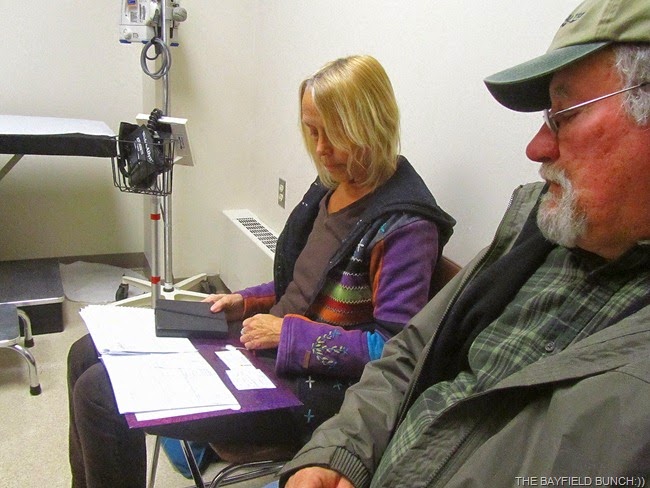 KELLY COMES TO HER APPOINTMENTS WELL PREPARED WITH TEST RESULT COPIES & A LIST OF QUESTIONS…WHEN I GO TO SEE THE DOCTOR I’M LUCKY IF I REMEMBERED TO TIE MY SHOES
Her liver is fine & she does not need another bi-opsy.  She is to stay on her current medication but take it all at once at supper time & not 3 times a day as previously instructed.  What Kelly does have however is Primary Biliary Cirrhosis which is an Auto-Immune disease that attacks the bile ducts.  No damage to her liver yet but it is something that will have to be periodically monitored to prevent future problems.  He sent her to the lab for blood work before we left & said for her to return in 3 months which will be early August.  And that was that, we were on our way.  Our total time in the hospital was slightly over an hour.  Tim Hortons has a spot in the lobby so it was 2 coffee’s to go & we were on our way.  (Kelly does have an appointment with her Stratford Internist in 3 weeks & has to have another bone scan for her Osteoporosis) 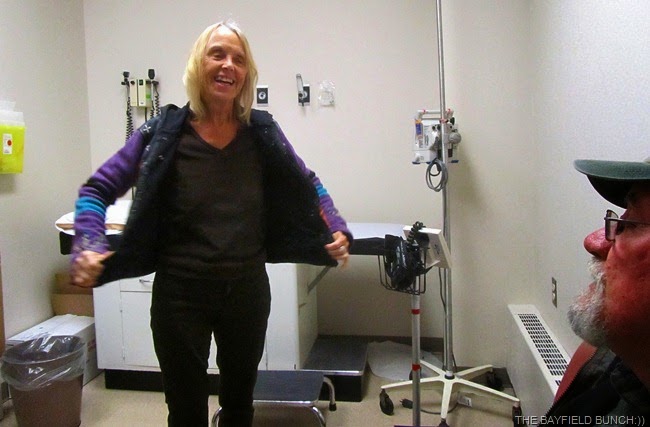 SHEDDING A HEAVY SWEATER BEFORE HER WEIGH-IN WHICH TURNED OUT TO BE 115 POUNDS…WHEN MY DOCTOR WEIGHS ME HE MAKES ME STAND ON THE TRUCK SCALE NEAR THE HOSPITALS LOADING DOCK
Our drive home was again under cloudy skies & rain.  No stops anywhere just straight back to Bayfield.  With damp temperatures in the mid to high 40’s I had no desire to be outside so it was another snoozy inside recliner afternoon alternating between the television set & the computer.  Same weather for Saturday again…….cold, cloudy, & wet:((

DON’T TRY TO IGNORE ME RALPH I KNOW WHAT YOU TWO WERE UP TOO!!!!!!!!
Oh, & I did take our Kindle along this morning & was able to sit quite contentedly in the hospital waiting room with my easy to see screen reading more of my UAP/UFO (Unidentified Aerial Phenomena/Unidentified Flying Object) book by author Leslie Kean entitled, ‘UFOs: Generals, Pilots, and Government Officials go on the Record’ .  I am about two thirds the way through now & happy to say my thoughts over the years on the UAP/UFO phenomena are as expected……'definitely confirmed’.  Anyone reading this factually concise book cannot help but arrive at the same accurate conclusion.  (not unless you belong to the ‘Earth is Flat’ society that is) There are unidentified craft in our skies being operated by an obvious intelligence of some kind.  What these craft are, who or what is operating them, & where they are from is still unknown. The hard & fast evidence is documented & it is not a question of ‘are they real or not.’  Of course they are real.  And why is it of all the leading countries in the world it is only the United States Of America that repeatedly debunks the reality of Unidentified Aerial Phenomena or UFO’s as they are commonly referred too.  This is a no-nonsense book & the author goes to great length to answer that as yet unanswerable question.  If you really want to find some answers & have an interest in knowing what is actually going on I suggest you first read this REVIEW of Leslie Kean’s book & then the book itself…………………

TODAY WAS RED WING BLACKBIRD DAY
GROANER’S CORNER:((  We took the family to one of those restaurants where the walls are plastered with movie memorabilia. I went to see the hostess about reserving a table.
When I returned, I found my 11-year-old daughter staring at a poster of Superman standing in a phone booth. She looked puzzled.
"Doesn't she know who Superman is?" I whispered to my husband.
"Worse," he replied, "she doesn't know what a phone both is."
Posted by Al Bossence at 5/02/2014