JUST A RUNNIN ON THE BEACH TODAY

It was the color blue that saved me this morning.  Up until 9 a.m. we were under a damp heavy overcast & I had resigned myself to another long boring day inside.  Finally, with sunlight beaming through our Pine trees Pheebs & I hustled our buns outside.  Kelly was already off running errands in Goderich.  Cranked up the Jeep, threw the cameras in, loaded up the little Bugs & off we went in search of whatever.  And whatever is just what we found. 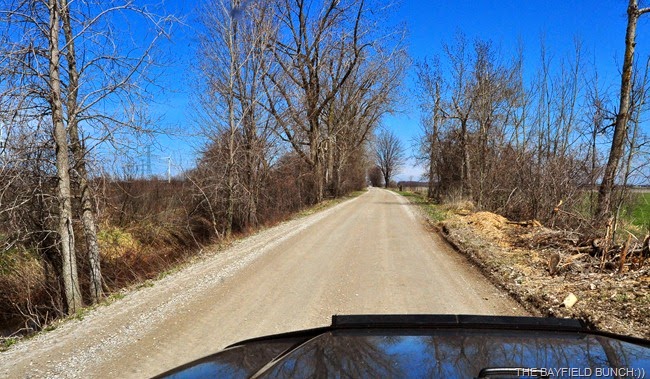 Our travels rolled us south out of Bayfield.  About 10 minutes after we left home I thought we had driven into Orson Wells, 'THE WAR OF THE WORLDS'.  First saw a tall crane boom way off by itself in an open field. Thought that an odd place for a farmer to construct a barn. Another mile down the road I saw what appeared to be large arms reaching into a cloudless sky above a forested horizon. It was here my ‘War Of The Worlds’ thoughts quickly took shape. In that movie flashes are seen on the Planet Mars & a short time later meteorite like objects strike the Earth. From those impact points grew large metal Alien machine like Monsters standing up over the horizon. And that is what I saw this morning. Large metal Monsters looming on the horizon where large metal Monsters had not been when I last drove through the area. I was a bit startled by what I unexpectantly saw. Of course the word Monsters depends on which side of the rural fence one is standing on & for many in our area they truly are Monsters indeed. 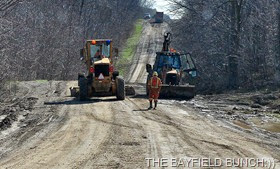 WHAT COULD BE GOING ON WITH OUR NORMALLY PEACEFUL COUNTRY ROADS & WHAT’S THAT STICKING ABOVE THE HORIZON IN THE RIGHT OF THE TOP PIC?
Of course it is large wind turbines I am talking about. Those ones you typically see stretching for miles upon miles down in the wide open spaces of Texas & other States in the area. Our scenic Huron County landscape is quickly being transformed into something that has turned farmer against farmer, neighbor against neighbor & friend against friend. I counted 6 turbines completely finished & standing.  Over the next half hour or so criss-crossing some country roads (Centennial & Pavilion) I saw another dozen Monster machines in various stages of construction.

LOOKING SOUTHEAST FROM THE GOSHEN LINE 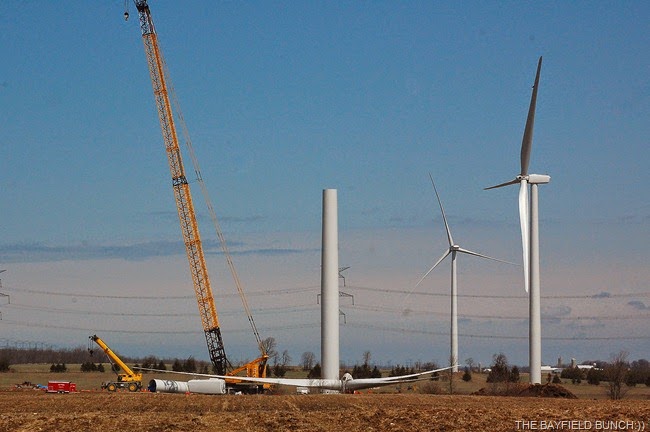 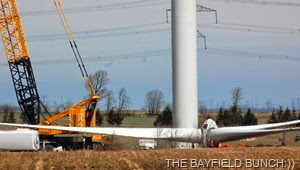 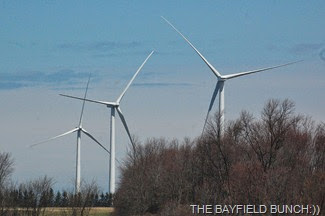 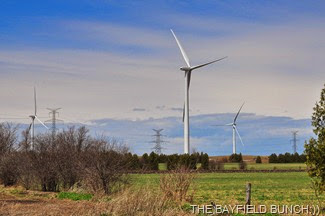 THE DARKER BLUE LINE ABOVE THE HORIZON IS LAKE HURON

On these quiet country back roads I also became suddenly aware of increased traffic. Dump trucks, heavy equipment haulers, numerous white pick-up trucks, a heavy duty tow truck, road graders, Terra Gators, Backhoes, a large fuel truck, men in orange suits, safety cones, flagmen, & outdoor blue portable washrooms. These usually peaceful picturesque serene farm fields were abuzz with human activity. New gravel roads crawling across muddy fields ended at large turbine construction sites. And I have a feeling this is only the beginning of the massive & controversial wind turbine project in our area. For sure our beautiful South-Western Ontario countryside here in parts of Huron County is not going to be the picture postcard it once was. . 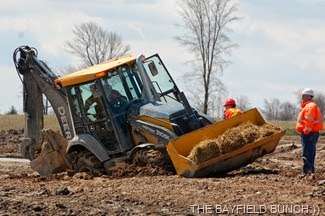 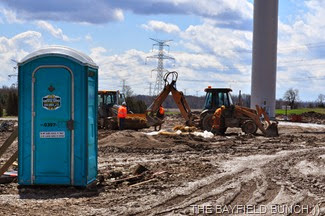 CAME ACROSS WHAT APPEARS TO BE A BASE OF OPERATIONS…NEVER SAW ANY OF THIS WHEN LAST THROUGH HERE IN THE FALL
From the wind turbine surprise Pheebs & I headed ourselves down to the lakeside town of Grand Bend. A wave to Winnie as we passed Ron's RV lot & headed for Tim Hortons. 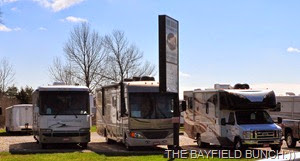 A small coffee to go & we headed down the Bend's main drag to the beach. I had brought a Morning Glory muffin from home & we sat in the Jeep watching Lake Huron's waves rolling in breaking against the pier. 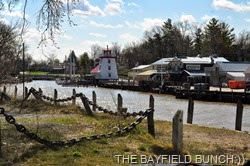 COFFEE & MUFFIN WHILE ENJOYING THE GRAND BEND HARBOR VIEWS
I knew where Pheebs & I could walk on a quiet stretch of beach just north of Grand Bend so that's where we headed. Pheebs loved running through the sand dunes & along the beach beside the water being very, very, careful not to get her paws wet. Despite wind coming in across Lake Huron it was a fine morning with sunny skies & a warming sun.  Pheebs just raced around a hundred miles an hour all over the place. 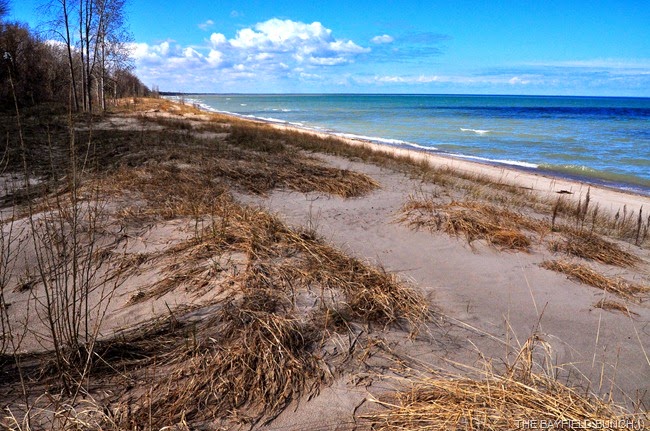 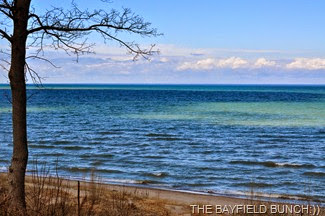 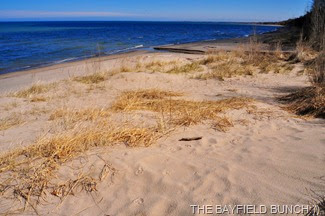 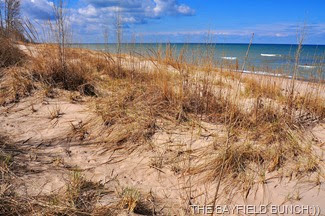 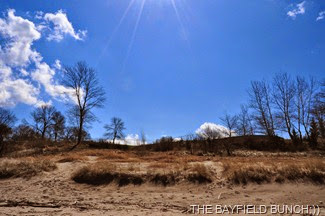 Another 5 miles or so north up the lake I knew of another spot where Pheebs could get out for a second run. Both these beach stops brought back a flood of memories for me. This was the area we sometimes hung out as young teen-agers in the early 60's & young adults in the late 60's & early 70's although the way many of us lived our lives didn’t have a whole lot to do with being adults.  The second beach stop was one of the first places I brought Kelly when we met back in the summer of 93 & it is the memories from that time forth I prefer to remember. 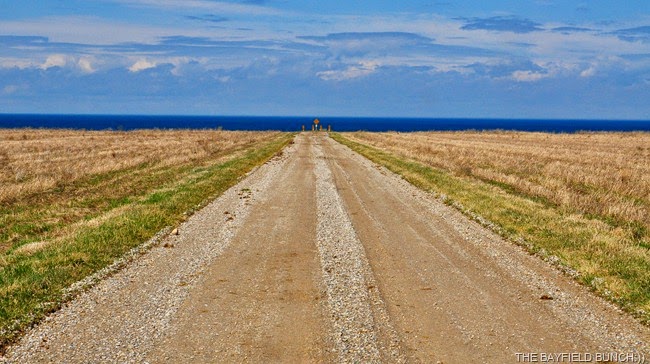 SLOW DOWN, MEMORIES AHEAD 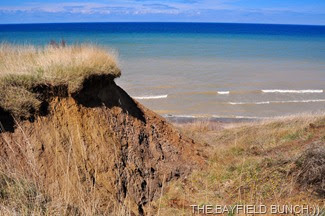 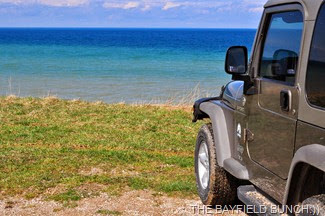 LAKE HURON IS SLOWLY ERODING AWAY THE SHORELINE 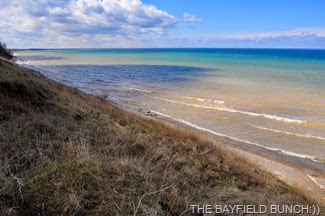 Noticed a weather front coming up from the South-West so we headed for home. By the time we reached Bayfield we were again under overcast skies but no matter, we had already had ourselves a nice sunny morning Jeep ride ambling our way through the countryside followed by a Tim Horton's coffee & a walk along the beach. It was just the Spring tonic Pheebs & I were needing & the 3 hours of sunshine we had sure went a long way into picking up my spirits & re-charging my tired batteries.  We even managed to get another utility trailer load of yard waste back to the recycle area before calling it a day.

I like TIOGA GEORGE'S attitude about his changing future. Not looking back & lamenting the fact Miss Tioga & the majority of his possessions are no more he has seized the opportunity of change to look ahead & embrace the positive aspects of a new lifestyle. Atta boy George, keep the wind in those sails............. 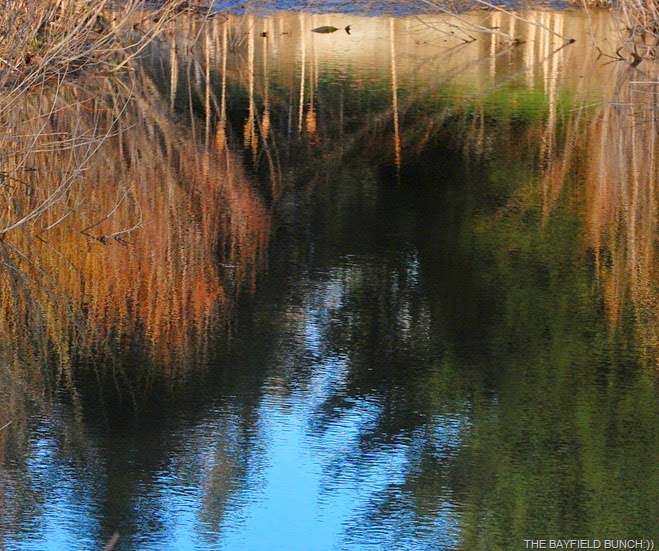 TOM figured the best way to deal with one of his long time fears was to step right up to it & strap it on. He hadn't planned on that but after riding a roller coaster named The Hulk 11 times in a row he later found himself standing in front of 2 tall towers. A decision had to be made……………. And a rough night for RETIRED ROD as he used a Purell spray bottle to do battle with an unseen enemy in a sometimes darkened no electricity strange No-Tell Motel room. 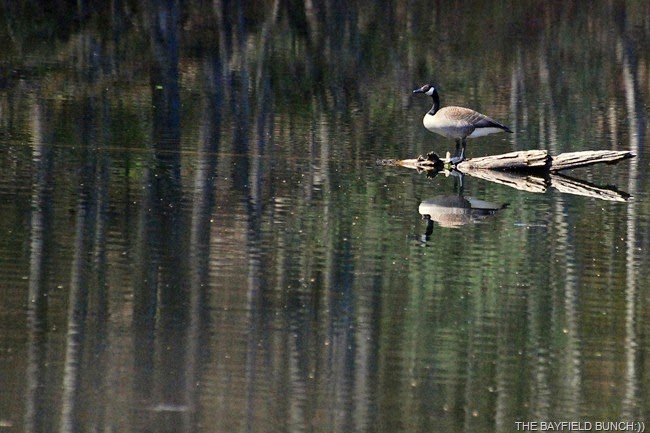 Back in the 60's Johnny Horton had a song called, 'North To Alaska' & many folks have since heeded Johnny's words & done just that. Latest adventurers currently in the process of pulling plans & equipment together to make that very journey are Montana's very own Mike & Janna from TIN TEEPEE/LOG CABIN. 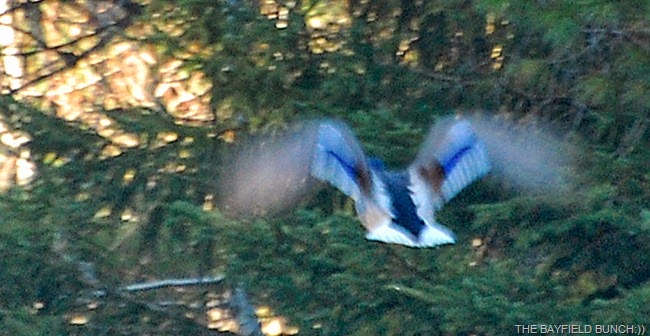 WITH A WHIRR OF MALLARD WINGS

A few reader questions from Wednesday night’s post regarding our soon to arrive Triple E Commander.  No problem getting into any of the boondocking sites we have ever been to over the years with a longer 36 feet.  Our problem will be squeaking through McDonalds, Cracker Barrel, & smaller gas stations.  We didn’t have too many problems with our 33’ Damon in most of those places but our length did tangle us up a few times here & there.  With the usual amount of hollering & swearing from me we were always able to untangle ourselves unscathed.  I can’t answer the question yet about enough power on the mountain grades with this rig but we always have the option of unhooking the Jeep if we run into any problems.  No matter what engine size, length, or how fast I am peddling, the Diesel bangers still blow our shorts off going up hill.   And yes we are seriously considering leaving earlier this year & traveling across Western Canada before dropping south to Arizona. 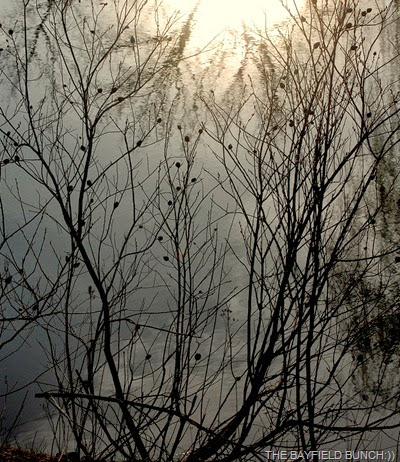 GROANER’S CORNER:((  An 18th-century vagabond in England, exhausted and famished, came to a roadside Inn with a sign reading: "George and the Dragon." He knocked.
The Innkeeper's wife stuck her head out a window. "Could ye spare some victuals?" He asked.
The woman glanced at his shabby, dirty clothes. "No!" she shouted.
"Could I have a pint of ale?"
"No!" she shouted.
"Could I at least sleep in your stable?"
"No!" she shouted again.
The vagabond said, "Might I please...?"
"What now?" the woman screeched, not allowing him to finish.
"D'ye suppose," he asked, "that I might have a word with George?"