I HEARD HER SAY ‘SORRY’…..I HEARD MYSELF MUTTER SOMETHING ELSE!! 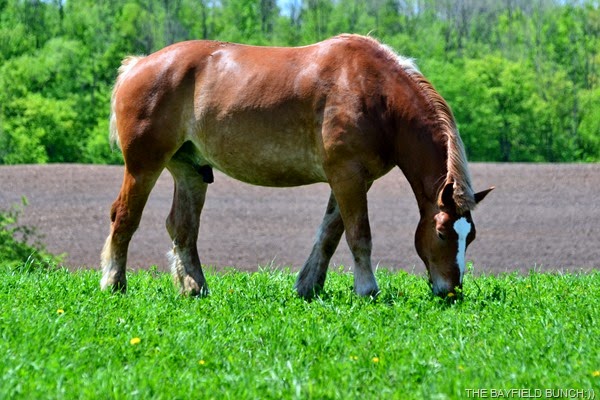 Can't remember the last time I was ever at opening day for anything.  Maybe the Grand Canyon's North rim back in May of 92 so Friday morning I figured I had better bring myself up to speed on my 'opening day' status.  Kelly & I slipped into Bayfield first thing to attend the grand opening of Bayfield's brand spanking new Foodland grocery store. 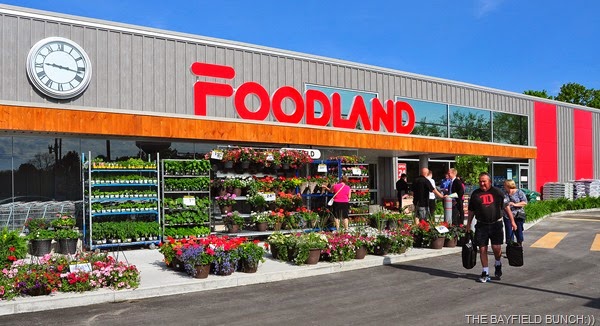 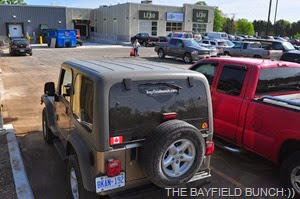 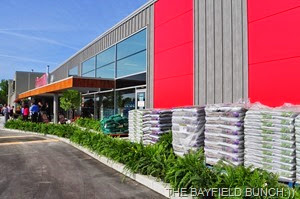 AND HERE COMES KELLY WITH HER LITTLE SACK OF GROCERIES 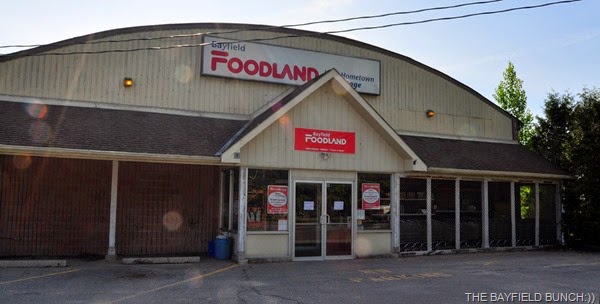 BAYFIELD’S OLD FOODLAND
We mistakenly thought if we went right at 9 we would beat the masses.  Well that was a wrong thought & I knew it was wrong before we even arrived at the store.  All the vehicles ahead of us on the highway had their right hand turn signals on....they were all heading for the new Foodland grand opening.  Big spacious parking lot with every spaced filled.  I could feel myself getting grumbly already.  People milling about in their cars looking for a space.  We caught a break when we saw a van leaving just in front of us. 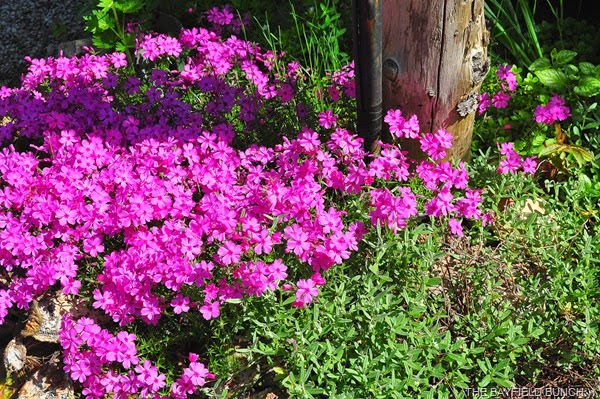 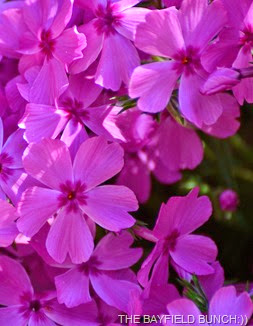 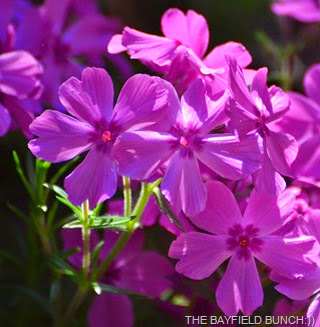 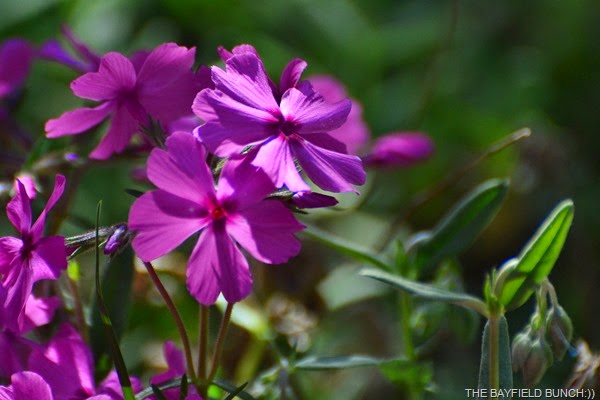 I should have known enough to just stay put in the Jeep & let Kelly go in.  But I didn't.  I also should have clued in when I saw 3 obviously smart men sitting in their vehicles while their wives had gone into the store shopping.  My grumble level was escalating.  I deftly dodged some people coming out of the store in an animated stage of conversation but my momentary distraction headed me off into the exit door instead of the entrance door.  An employee spun me around & headed me back in the right direction.  I was now well beyond grumble!!  Wall to wall people ahead & I should have immediately turned right around then & there & got the heck out of the place but before I could process that thought Kelly slammed on the brakes right in front of me to pick up a shopping basket.  What!!!!  I swerved left & was immediately T-Boned by a short heavy set lady racing at a break neck pace back to the entrance to grab a shopping cart.  I heard her say 'Sorry.'  I heard myself mutter something else. 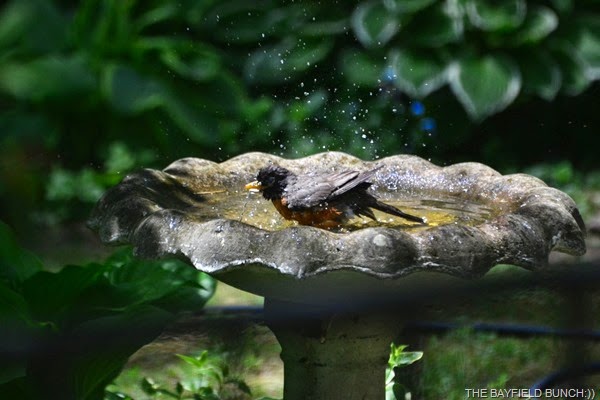 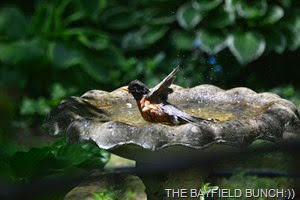 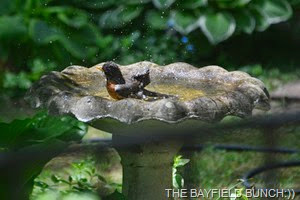 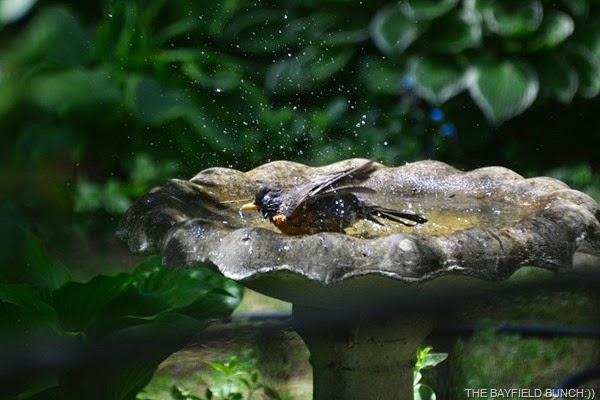 WE HAD ONE VERY HAPPY LITTLE ROBIN IN OUR FRONT YARD BIRD BATH THIS MORNING
There had to be 132,756 people in that store & I was pretty much in full blown people panic mode.  I knew I didn't have the patience to snail along behind Kelly while she looked at this & & fiddled with that so I pulled a fast right hand turn & went careening off down a few aisles figuring I would at least try to get to the far corner of the store just to say I had officially been there for opening day & seen the store.  In all this turmoil I can tell you that I did see a really nice big bright colorful grocery store flash before my eyes.  Well I saw parts of it anyway amid the crush of frenzied shoppers, browsers, dangerous shopping cart drivers & dawdlers.   Saw my friend Di in line at a check-out for a few seconds & she was just about as panic stricken as I was.  She said her husband Harry had already fled the store & was last seen running down the road in the direction of Bayfield. 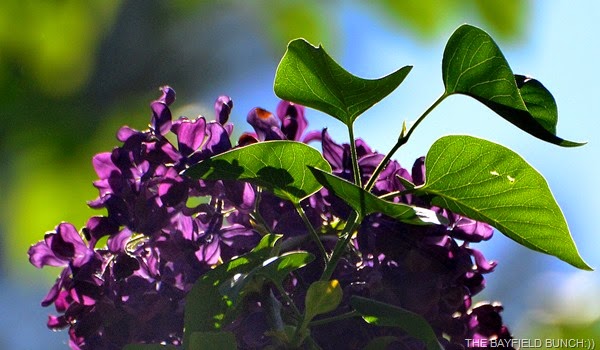 AND A FEW LILACS FOR MY AUNT JEAN IN FLORIDA TONIGHT 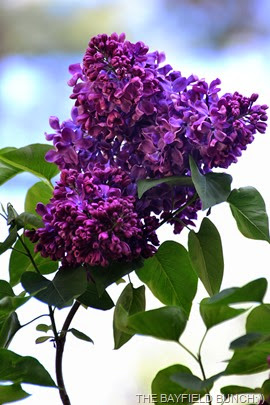 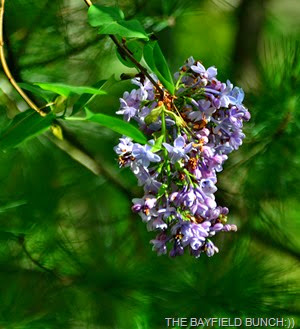 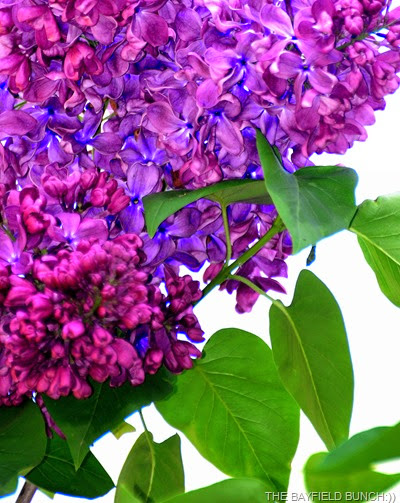 I jostled & pushed my way around one more aisle & then made a desperate attempt to exit the building fast as I could without knocking anyone to the floor in my rush.  With patience & tolerance in tatters I was a like a desperate man scrambling his way out of a shark tank.  Oh the freedom of fresh air outside as I made a bee-line to the farthest corner of the parking lot where the Jeep was parked.  And oooooooh the sweet feeling of space all around me again.  It occurred to me then why it has been so many long years since I had ever attended the opening day of anything.  Hopefully in my remaining lifetime that was the last Grand Opening of ever for me.  But again, what a beautiful new store Foodland now has in Bayfield compared to their old location.  And what a great addition for the town & folks from Bayfield & surrounding area.  Bravo Foodland & good work all you guys, looks great:))   I'll come back again on a heavily rain soaked day when I know everybody else is staying dry by…………………'STAYING HOME'.

NOW I KNOW THIS ISN’T BROTHER & SISTER BUT MAYBE VERY DISTANT COUSINS……..D’YA THINK:))
I remember someone asked what kind of reception we were getting with our new Jack antennae.  We'll know better once we are traveling.  We have never had TV reception in any of our RV's here in the pine trees but we did get 2 channels a couple days ago with Jack.   However, Rick & Kathy over at IT'S ABOUT TIME had this to say in a comment::   'We've had our Jack antenna since 2012 because the old bat wing only got two static filled channels at best. As soon as the Jack antenna was connected we had thirty-five channels. The only time we have a problem is when we forget to reset the booster after watching cable TV.
Be Safe and Enjoy! 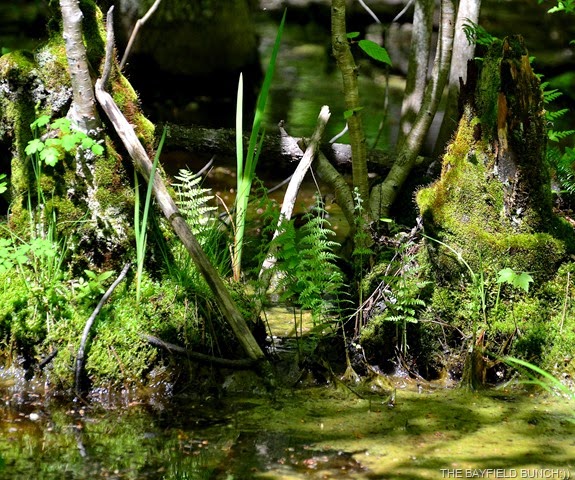 We are into our 4TH day of consecutively great weather here in Bayfield Ontario & I'm thinking this has to be the longest stretch of back to back super weather days this year.  It's a nice time right now before the heavier summer heat hits us. 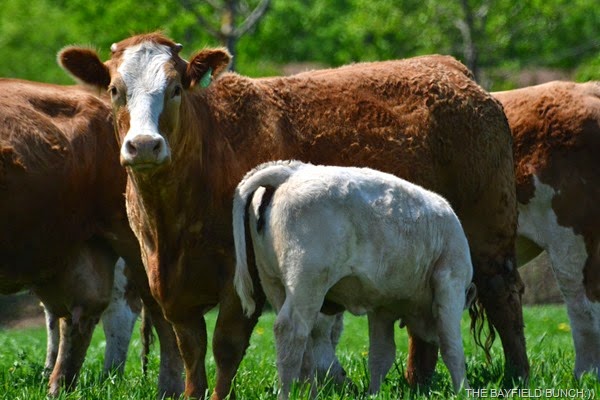 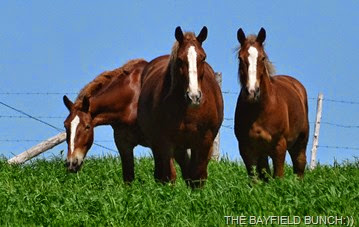 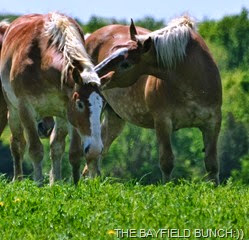 We had several reasons for heading up to the Bruce Peninsula Friday & one of them was to check out some locations for the rig.  Not too encouraging as far as boondocking areas go.  It's more of a rugged type of landscape on the Bruce, heavily forested, lots of rocks & small lakes.  Lake Huron to the West & Georgian Bay to the East have some of the finest clear waters with the Georgian Bay side also sporting caves, grottos, & rocky cliffs.  There's fresh clear & cold waters are  a haven for Scuba Divers.

We figured it had been nearly 20 years since we had last been camping up that way.  Some of Friday's photos were taken on a 10 acre piece of property for sale that out of curiosity we took a drive in to have a look at.  Emphasis on 'just to look at' but what a great rustic area this whole Bruce Peninsula is.  A perfect place for a reclusive summer retreat.   From Bayfield to TOBERMORY at the Northern tip of the Bruce is about a 280 mile round trip from Bayfield or 3 hours one way…………………… 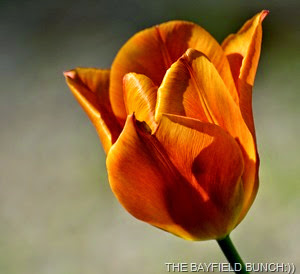 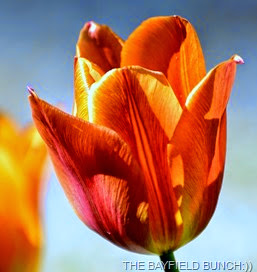 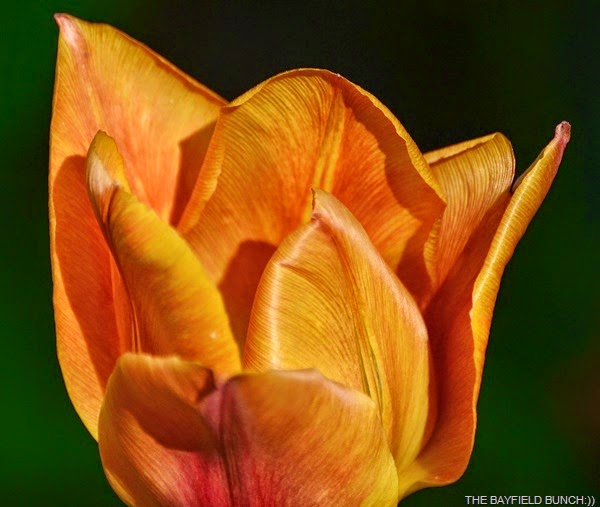 A FEW DAYS AGO THIS ORANGE TULIP WAS A DEEP RED COLOR
GROANER'S CORNER:((    A man wrote a letter to a small hotel in a Midwest town he planned to visit on his vacation. He wrote:  I would very much like to bring my dog with me.  He is well-groomed and very well behaved. Would you be willing to permit me to keep him in my room with me at night?"  An immediate reply came from the  hotel owner, who wrote:  SIR: "I've been operating this hotel for many years. In all that time, I've never had a dog steal towels, bedclothes, silverware or steal pictures off the walls or use them as a coloring book.  I've never had to evict a dog in the middle of the night for being drunk and disorderly. And I've never had a dog run out on a hotel bill. Yes, indeed, your dog is welcome at my hotel. And, if your dog will vouch for you, you're welcome to stay here, too."
Posted by Al Bossence at 5/31/2014