HAD THE RIG OUT FOR A SPIN & A LITTLE STORY THAT HAD SOMETHING TO DO WITH FLORIDA & MY AUNT JEAN:)) 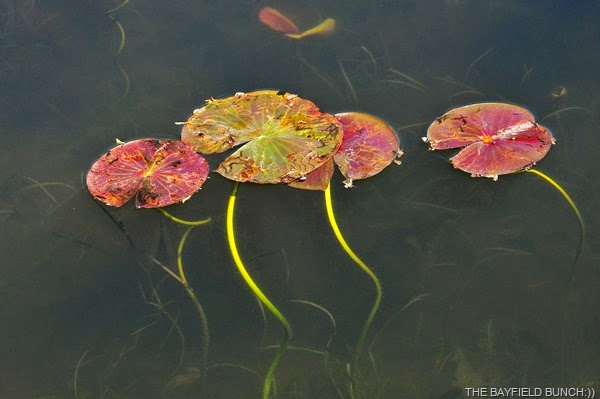 Nice that our forests are still bug free for morning walks.  With our weather warming up I'm sure our bugless times will soon be coming to an end. 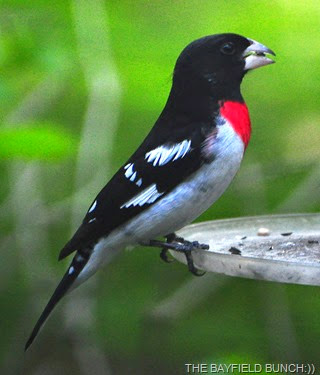 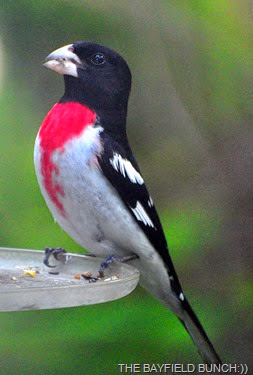 TWO SIDES OF MR. RED BREASTED GROSBEAK
I was feeling a need to take the Big EEE out for a drive so late this morning we loaded up the little Bugsy Buns & headed ourselves out for a wee drive in the countryside.  All paved roads of course as we headed south of Bayfield down around the Zurich area to have us another look at all the big wind turbines going up.  Just a weather perfect morning for a half hour or so drive in the rig. 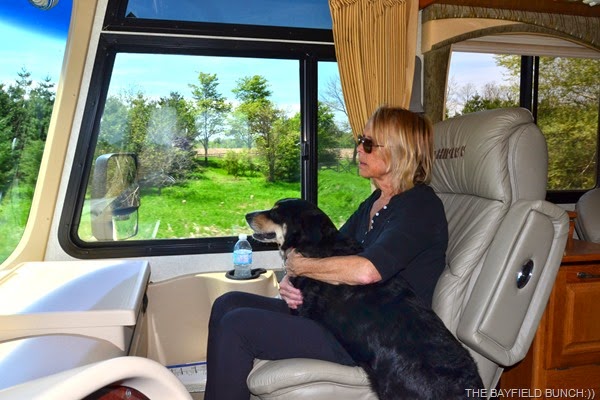 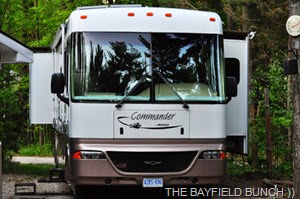 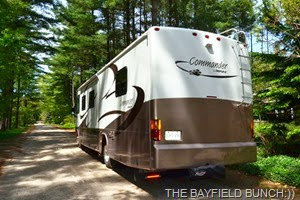 I am so impressed with the handling capabilities in this Motorhome.  We've never had a rig as smooth & quiet as this one.  And I'm especially happy we were able to again have us a rig with the powerful Chevy 8.1 Vortec engine & Allison transmission in it again.  Our Damon Motorhome & Class C Sunseeker had that Chevy engine & they were way peppier than the Ford V-10 engine we had in the Class C Winnebago.  This 36’ Class A Motorhome has far more torque than our 26’ Class C Winnie had.  The transmission is much smoother off the line & does not over-rev itself like the Ford V-10 seemed to do. 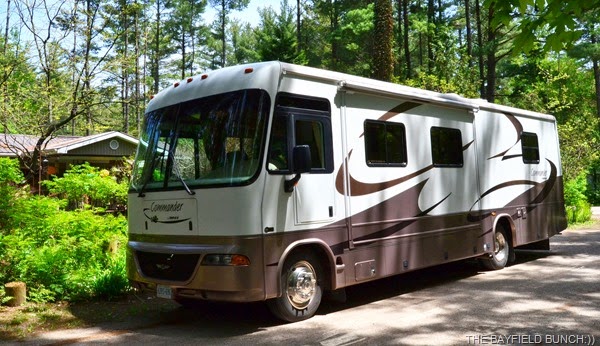 WE HAVE THIS PHOTO ON OUR SIDE BAR NOW
We didn't quite get off Scott-free on our morning drive though.  We have never had full length rear sliding closet mirrors in a coach before so we forgot to lock the doors.  Yep, by the time we arrived back home one of those doors had jumped it's track & a handle came off.  Lucky for us Kelly was able to fix it.  I went in the house & fixed something too.  A peanut butter & honey sandwich.  Second silly thing I did on our drive was a no brainer.  I am in the habit of putting my 4 way emergency flashers on when backing out of our parking spot onto the road here at home.  Did I remember to cancel those 4-way flashers once on the road ready to go?  Nope!!  The steering wheel position was such that it blocked me from seeing the flashing signal on the dash & sure enough I did our whole morning drive out on the area highways with my 4-way flashers going.  Didn't realize that until I stopped for some construction in Bayfield.  Any stop I make on a highway I always hit the 4-ways to alert traffic coming up behind that I am either slowing down or stopped so when I reached for the flashers in the construction zone today......they were already on.  Geeeezzzzzz:(( 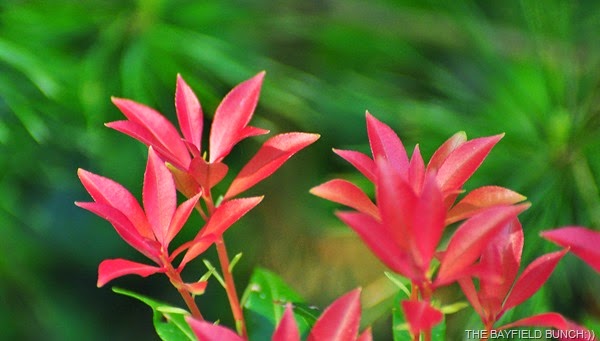 Despite feeling a little under the weather Kelly's been doing a lot of purging while re-organizing her room these past couple weeks.  Kelly buys a lot more stuff than I do.  I’m still wearing my old tattered & worn shirts from years ago.  It is rare for me to go out & buy a new piece of clothing.  Why would I do that when my decade old stuff is still hanging together.  Kelly’s already taken a couple Jeep loads of her stuff off to the Consignment & Thrift Stores in Goderich.  Another big load ready to go soon as we get the larger cargo area Santa Fe back.  Anyone with a house knows how stuff accumulates.  Seems stuff just begets more stuff.  At least we stopped going to garage sales & scratch 'n' dent stores years ago.  Maybe I’m long overdo for a big Thrift Store bash & super-duper make-over……………. 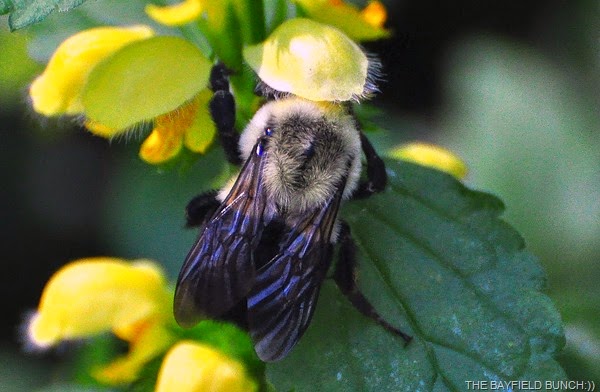 WE SEEM TO HAVE A LOT OF BUMBLE BEES THIS SPRING

Back in the late 90’s while in the last stages of recuperating from some foot surgery I flew down to Sarasota Florida to visit my Aunt Jean for a week.  We bopped around to different places & one of them was MYAKKA RIVER STATE PARK.  The thing I remember most about Myakka was the ba-zillion Alimagators we saw on a boat ride there.  Fellow RV Bloggers Chuck & Geri have been volunteering at Myakka for awhile now & just love it.  They have a month to go & recently posted about their remaining time at the Park.  You can read that post at HAPPY TRAILS.  We met Chuck & Geri at Darby Well Road near Ajo Arizona a few years back just about the same time we first met RV SUE & HER CANINE CREW. 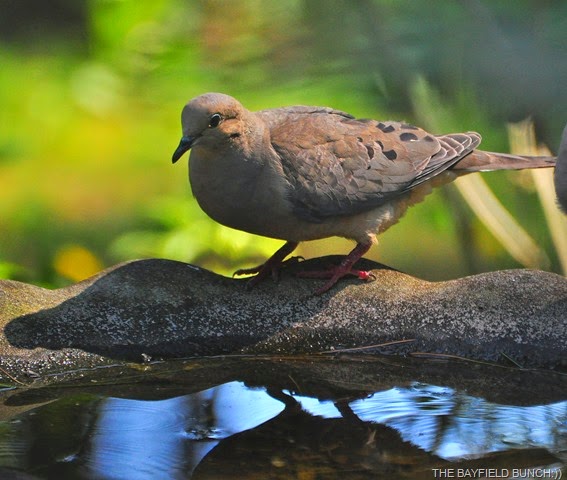 ON OUR BIRDBATH TODAY

Reading Chuck & Geri’s post about Myakka reminded me of a little story about that trip to visit Aunt Jean in Florida & about the Sunday I flew back & landed in Toronto.  Can’t give you the reason’s or details why my Mother would have gone ballistic if she had known I was in Florida visiting her Sister but I’ll tell you what happened on my return.  Kelly & I lived in an old farmhouse at the time near a little place called Fullerton west of Stratford Ontario.  My Mother lived in Tavistock east of Stratford.  Sometimes on a Sunday evening we would meet in Stratford for supper at Swiss Chalet a favorite chicken eatery of my Mother’s.  Turns out while I was in Florida my Mother called Kelly at the farmhouse to say her & Dayton (remember my 2 part LAMP part one & LAMP part two story) would meet us at Swiss Chalet Sunday afternoon at 5 p.m.  My Mother had no idea I was in Florida but as would have it my return flight was for that very Sunday.  My plane landed in Toronto around 3:15 as I recall & luckily the company I was working for in those days (Stratford Airporter) had sent a van for me so I would not have to wait until the 6 p.m. Stratford shuttle left the Airport for Stratford.  I told the driver who was a good friend of mine about my predicament & having to be at the Swiss Chalet in Stratford by 5 p.m. or a family situation could turn ugly & go off like nuclear blast.  He didn’t spare the horses & had me back to the Stratford Airporter office which was in the East end of Stratford just minutes before 5.  Kelly was there waiting for me with the engine running.  Swiss Chalet was about 4 blocks up the street & just as we pulled out & made a right hand turn we spotted Dayton’s car in the distance approaching from Tavistock to the east.  We quickly got into some traffic & they didn’t see us.  We made it to the Swiss Chalet about 3 minutes before they did.  Both Kelly & I had to be very careful over the next couple hours so as not to let anything slip about where I had really been for a week.  We ended up getting away with it & my Mother never ever did find out about my flying down to Florida for a week to visit her Sister, my Aunt Jean:)) 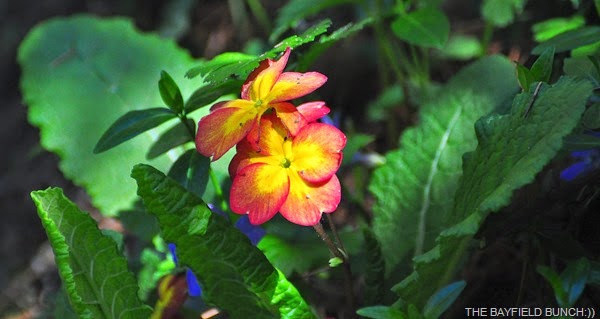 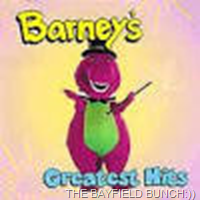 <<< AND JUST IN CASE YOU WERE WONDERING WHO BARNEY IS:))