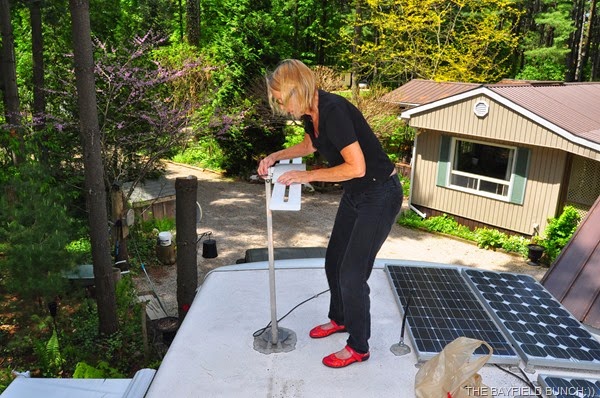 I had a part here for the Winnebago that I had forgot to put in the rig when we took it down to Ron's at FOUR SEASONS PERFORMANCE in Grand Bend a month ago.  Ron had emailed Tuesday night saying there is an offer on the table for the Winnie so Kelly & I took a drive down to Grand Bend this morning to drop off the part I had forgot to include & discuss the offer.  Ron said there has been other offers but none of them were in the ball bark until this one so we'll see how the negotiations go. 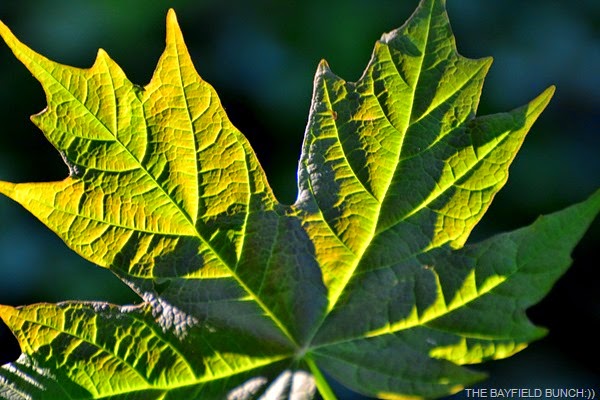 Spent some more time working on the exterior of the Big EEE this afternoon trying to see if I could get a better shine on the duller white finish.  The painted bottom part of the coach has shined up great but the oxidation on the white fiberglass is another story.  I have been trying different products but it looks like I will have to first use something to de-oxidize the finish before I can even think of trying to restore the original shine.  Now I know this sounds odd coming from a guy who isn't into all that shiny sparkle sparkle stuff but I just don't like that dull oxidized white look on the rig.  A little bit of my late teen years showing through when I would buy old cars with faded finishes & work like crazy with waxes etc to get them looking like a new again.  Kelly thinks the white looks fine but maybe I have eaten just one too many peanut butter sandwiches or something………………. 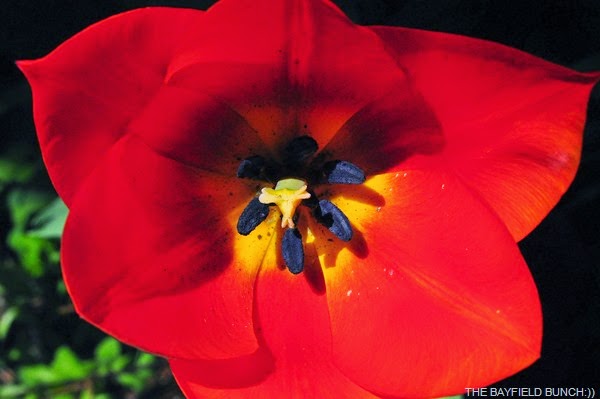 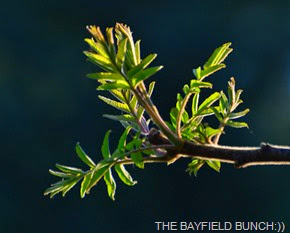 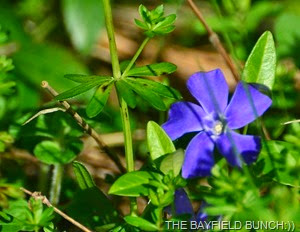 YOUNG SUMAC LEAVES & PERIWINKLE
ED in a comment on my Tuesday night post had this to say about my talk of cleaning the Big EEE’s roof,  “You are very attentive to having a clean RV roof. I am curious if you clean your sticks and bricks roof as frequently and what the benefits are in doing so to the RV?”  Well, Ed has a good point there.  First off we have never cleaned our sticks & brick roof because it is made of steel & just never seems to needs cleaning.  The Big EEE has a rubber roof….different story.  But Ed’s comment did get me to thinking so I headed off to the internet for some answers.  Well that just confused & educated me all the more.  I did come across this short little informative DITTY though.  Because of the shade our rig is parked in all summer there is a tendency for mould to accumulate so I will take another look at the roof in the early Fall to see if I need to get up there & get rid of the green.  In the meantime I think I will just cool my jets let things be………………….. 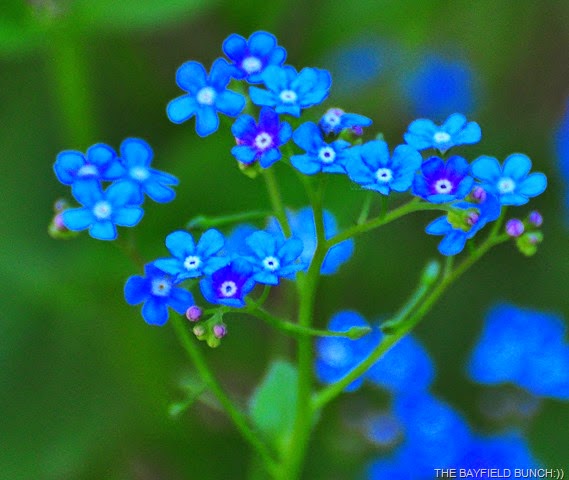 DON’T KNOW WHAT IT IS BUT IT’S ONE OF THE WILDFLOWERS IN OUR FRONT YARD
And speaking of jets I spotted this one flying over today.  Ever since a small boy I have always turned my eyes skyward when I hear a plane.  On a walk with Pheebs this afternoon I heard a slow moving jet overhead & knew right away it was not one of the usual jet sounds I hear.  Sounded low & it was not moving in the direction of normal flight paths.  Grabbed a couple photos of it & when I enlarged them I saw this small single engined straight winged jet had it’s landing gear down.  Figured the only reason for the gear down was a landing in Goderich straight ahead up the lake although it seemed way early to have the gear down already & he’s heading north for an East-West runway.  Any idea what kind of a Jet this is Tom??  No flashy paint on it so I’m wondering if it might be military………… 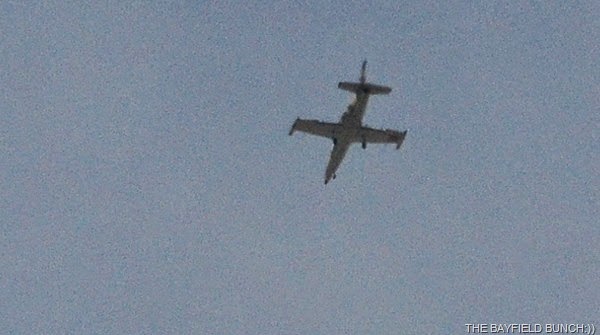 In our Shout Box a Guest suggested we check a couple boondocking websites geared to boondockers both in Canada & the States.  Both HARVEST HOSTS & BOONDOCKERS WELCOME are an excellent idea for traveling folks looking for a place to overnight other than RV Parks, Wally-docks or Rest Areas.  A great gesture by fellow Boondockers opening their properties for fellow Boondockers to stay a night or two on their travels.  Great idea for most folks but as readers know Kelly & I are kinda the exception to the socializing norm.  Boondocking in someone's driveway, yard, or on their property while appealing for most folks is just not for us.  While on the road traveling between points A & B we are comfortable just quietly slipping into the far end of a Wal-mart, a Casino parking lot, County Park, or a tasty Cracker Barrel.  We are usually tired, not into socializing, & are usually gone again before the Sun is up.  No obligations, no reservations, no emails sent or received, no phone calls, no commitments, & no hassles.  It’s just the way we prefer to travel…………………..Someone mentioned Crown Lands for boondocking here in Ontario.  Yes, there are Crown Lands but they are generally further north & not readily accessible for the most part.  Heavily forested.  Boondocking for us here in Ontario is a difficult bit of business but we are working on it. 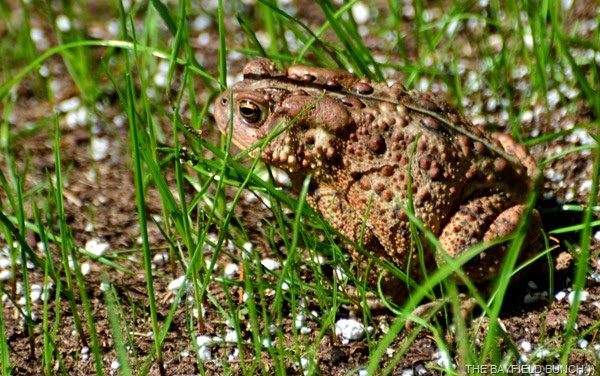 THIS IS NOT THE TOAD WE TOW BEHIND OUR MOTORHOME 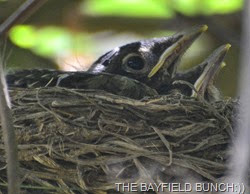 Just days before leaving Congress back in early April we bought something in Wickenburg (cheaper in the States) to replace our traditional RV TV antennae called a JACK digital HDTV antennae.  They are designed to bring in far more digital channels than the conventional TV antennae that comes with most RV's.  When I saw the parts in the box it discouraged me as to how to put it all together so it remained in the box.....until today.  Kelly went on-line & watched a video on how to install the Jack antennae & the immediate good news was that none of the parts in the box needed to be used for mounting it on the existing TV mounts atop the rig. Now that was a big surprise.  Found out all those parts were for mounting it on a pole atop a house, not an RV.  I was still sceptical but Kelly convinced me she could mount this Jack antennae on our existing roof set-up & with that up the back ladder of the coach she went with me right behind her.  And by golly between the two of us swaying back & forth on top of the rig we actually did get the new antennae installed after removing the old one.  And just like the computer video showed we didn't have to use one single part from the box except for the Jack head itself.  Just a couple pins & washers to be temporarily taken out, old antennae removed & the new head set atop the two antennae legs.  Holes lined up, pins & washers re-inserted & ‘walla’ we were done.  And the TV even worked too.  Now that was a bonus day thanks to Kelly.  Of course she told me she couldn’t have done it without me but I think she was just saying that to make me feel good.  Wives have a tendency to do things like that to us fellers you know. 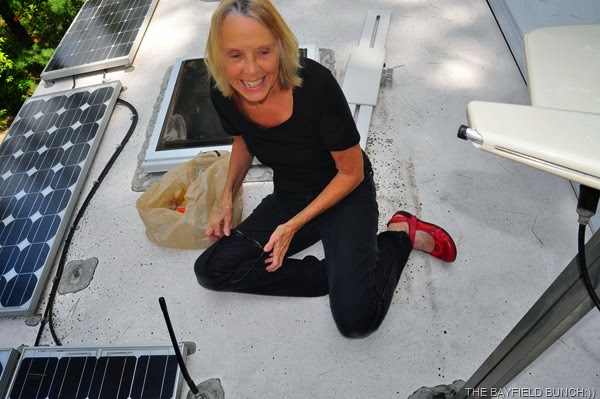 REMINDS ME OF THE OLD ‘DRIFTERS’ SONG….’UP ON THE ROOF’ 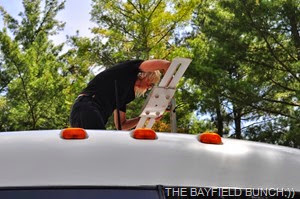 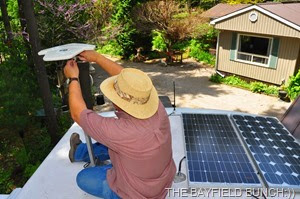 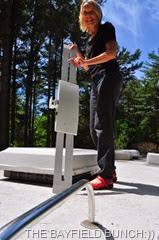 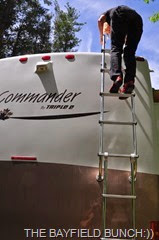 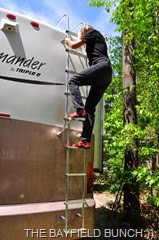 HANDING ME THE OLD ANTENNAE DOWN & THEN BEGINNING HER DESCENT 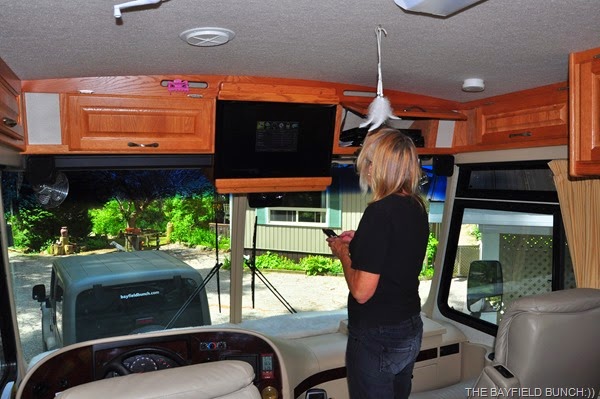 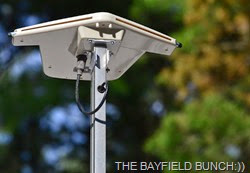 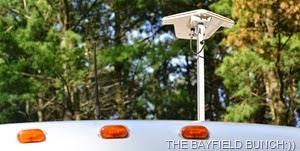 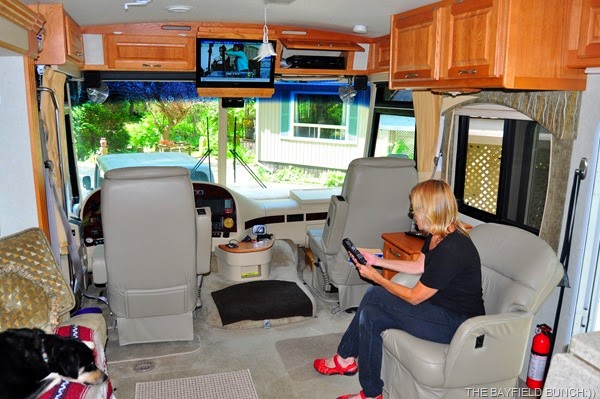 AND YEP, LOOKS LIKE THE TV IS WORKING, CHECKED OUT THE BEDROOM TV & IT WORKED TOO…A BONUS DAY:)) 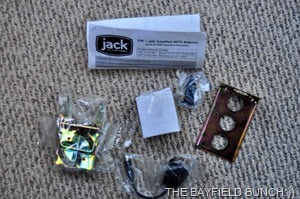 <<< THE JACK ANTENNAE PARTS WE DID NOT HAVE TO FIGURE OUT OR USE
Asked our neighbor what the name of that 'bamboo looking' plant was that I dug up & planted.  It is called COW PARSNIP. INDIAN CELERY, OR PUSHKI & although the stocks had a bamboo look to them I mistakenly assumed they were a type of bamboo.  My assumption was mis-leading.  Kelly read up on Cow Parsnip this afternoon & apparently we are Okay.  It grows tall & does spread but that is what I wanted it to do.  We do have bamboo 'grass' here & I sure know how that stuff spreads alright but like the Sumac trees it can all be easily controlled by cutting & trimming.  Here is what is said about lacy white flowers such as Cow Parsnip...... {Cow Parsnip (Heracleum lanatum) is a wonderful flowering perennial, excellent for the back of the flower bed. The lush, green leaves emerge in early spring, and are followed by flower stalks up to 5 feet tall. The blooms, 1 - 1 1/2 foot across,  are a fabulous basis for flower arrangements (put one in the vase instead of a frog!), and the dried seed heads are excellent craft material--they look like big snowflakes. A most unusual addition to autumn decorations}. 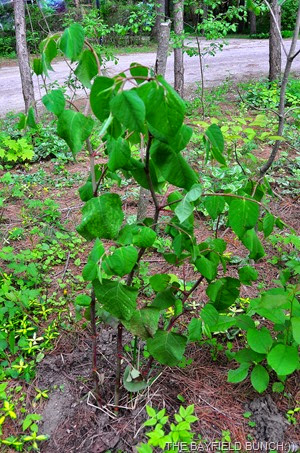 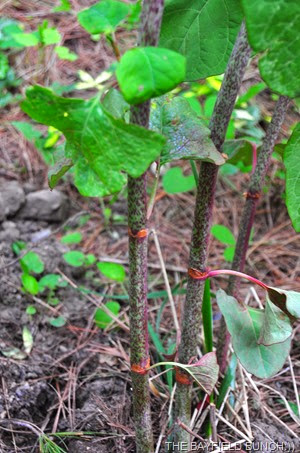 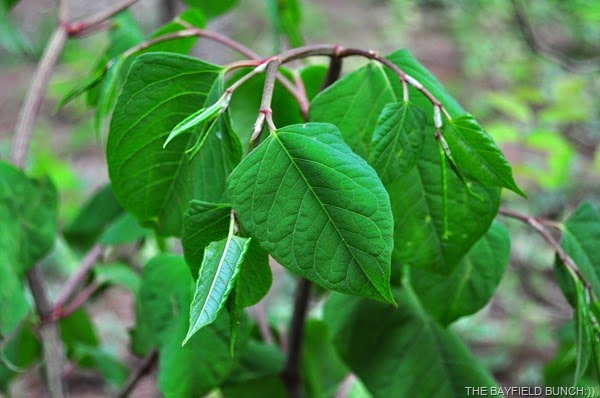 I WATERED ALL THE COW PARSNIPS AFTER TAKING THIS FINAL PHOTO

GROANERS CORNER:((  A vampire bat came flapping in from the night looking a little wrecked up & covered in fresh blood.  He parked himself on the roof of the cave to get some sleep.  Pretty soon all the other bats smelled the blood and began hassling him about where he got it. He told them to knock it off and let him get some sleep but they persisted in hassling him to no end until finally he gave in.  "OK!" he said with exasperation, "follow me," and he flew out of the cave with hundreds of bats following close behind him.  Down through the valley they went, across the river and into the deep forest. Finally he slowed down and all the other bats excitedly gathered around him.  "Do you see that tree over there?" he asked.  "Yes, yes, yes!" the bats all screamed in a frenzy.  "Good," said the first bat, "Because I DIDN'T!"