TODAY’S ACTIVITIES INCLUDED CLEANING THE CARPORT, HOSING DOWN THE JEEP’S ENGINE & MORE YARD WORK…I’M HAPPY TO HAVE THINGS TO DO:)) 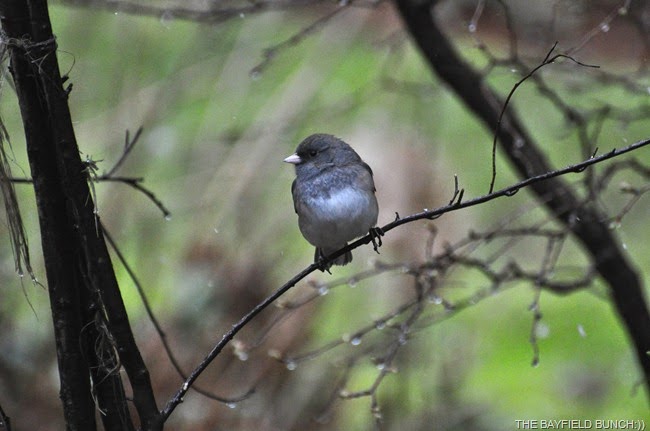 Think it was the first time this year we saw a touch of fog in the air this morning. Rains had moved through in the night & dripping raindrops from the Pine trees was enough to immediately convince the Pheebs she was not going out. No way Jose. She just does not like to get wet even if it is only a couple of errant drops of rain.

Despite the the colder damp temperatures (40F) I still had myself in clean-up mode & it was our carport I targeted first thing right off.  We have a 6x60’ storage section which is part of our over all carport & it was a messy clutter that just had to be dealt with.  We have a wood floor in the storage part but the carport itself is a dirt floor.  How many times over the last 8 years have I kicked myself in the pants (baggy ones) for not having a cement pad poured in there when the fellas built the carport & encouraged me to do that.  Guess I was in one of my penny pinching modes at the time so it has been a messy & grubby dirt floor ever since.  Dirt tracks into the storage area too & this morning I had to Shop Vac all that out of there.  We have a fella coming this week to give us a price to pour a concrete slab where we park our vehicles.  That should finally rectify my 8 year old penny pinching problem.  We are under no illusions it will be cheap:(( 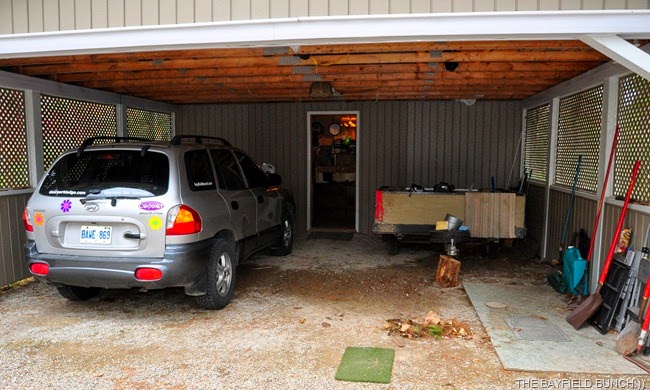 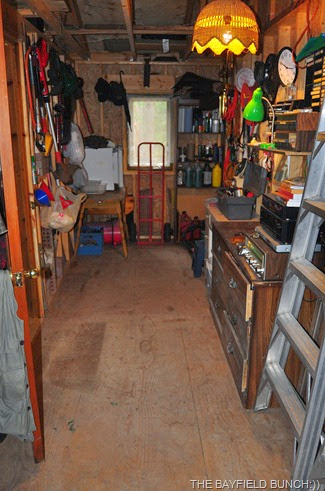 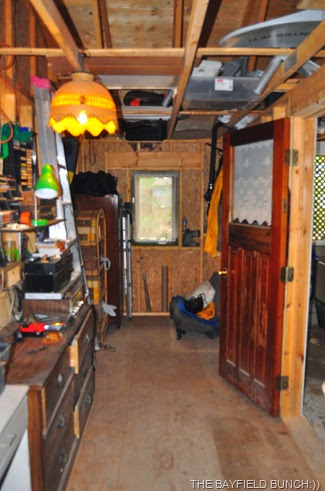 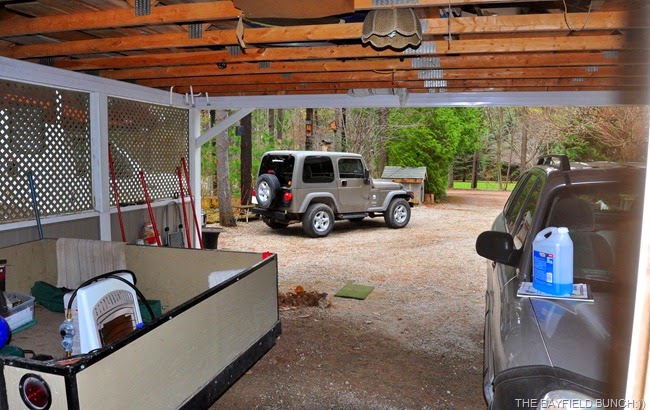 Finished up the carport clean-up about noon, grabbed myself a short rest & headed back out to tackle some more yard work. Keeping active was the only way to stay warm in today's colder temperature. Pheebs & I hauled a couple more utility trailer loads of pine needles to the recycling area. Somewhere in there I fired up the power washer again & hosed down the Jeep's engine. It was so totally covered in thick cinnamon colored red rock Utah desert dust. So did the Jeep start after I hosed it down?? Hey, it's a Jeep eh:)) 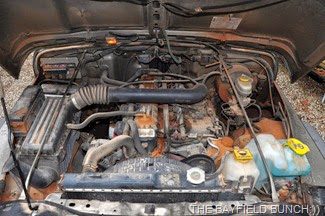 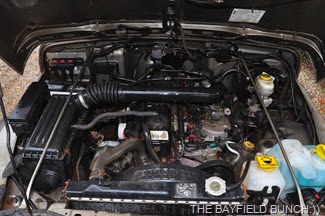 BEFORE & AFTER OF THE JEEP’S ENGINE WASH TODAY

Talked to our good RV friend Ron from FOUR SEASONS PERFORMANCE today & we'll be taking the Winnie Wagon down to Ron's lot in Grand Bend sometime this week. He said his phone has been busy already so it looks like a good start to the RV season for him. Probably going to be next week before we pick up the Triple E so for the first time in 8 years we will be temporarily RV-less:(( We have had an RV since 1998 when we first bought an old 21'Dodge Centurion. We were RV-less once before in 2004. After selling our 24' Prowler Travel Trailer it was about a year before we re-entered the RV world again with a small Gulf Stream Class C. 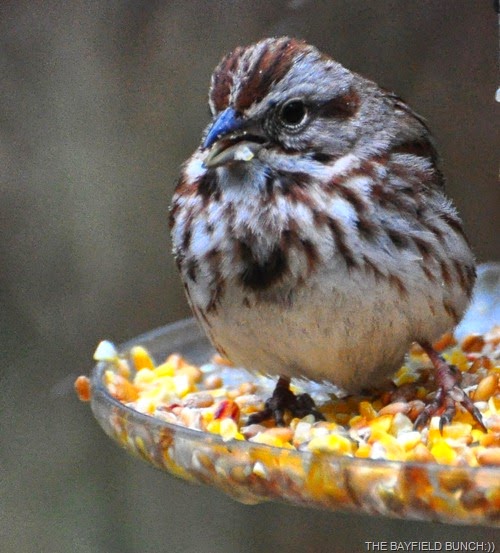 Steve from HOUNDS & RV'S is still having quite a time on deciding which RV combo is going to be best suited for him & his Hounds when they hit the road now that retirement is finally at hand. Choosing the right RV is no easy matter in many cases & Steve is a good example of how confusing all the options & combinations can be. I remember back in 06 how we went back & forth, back & forth, between a Motorhome vs a truck & fifth wheel decision. Convinced ourselves the truck & trailer combo was the correct choice for us. It wasn't. Just like our decision two winters ago to downsize to a smaller Class C. Thought we had all our Ducks lined up but somewhere along the line some of those Ducks waddled away on us while we were looking the other way. Some folks are fortunate enough to have their decisions work for them right off the bat while others have to work at it for awhile to get things right. It's all part of the great RV lifestyle & the stress & excitement of choosing the correct RV for one's needs is all part of the overall experience. Not necessarily rights or wrongs, just preferences, personal needs & tastes:)) 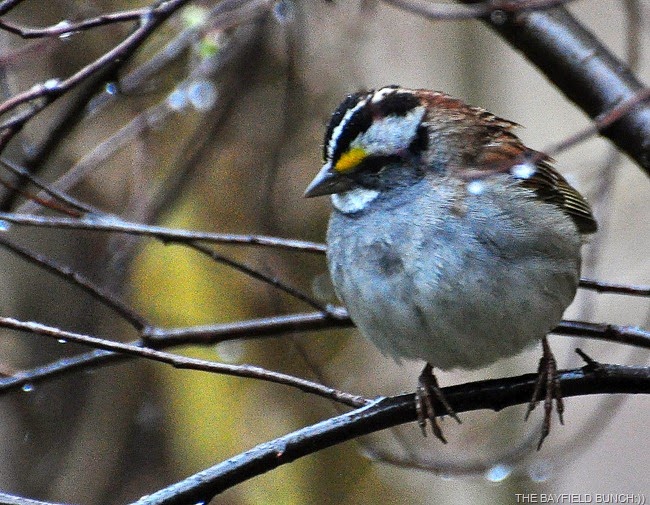 Ohhhhhhhhhhhhhh how great it is to be back in Canada eating REAL peanut butter again.  Yay, no more salty saturated excuses for the real thing.  No more additives, just real peanut butter.  The only main stream peanut butter I can remotely tolerate is Jif.  Tried some Kraft a few months ago & couldn’t eat it.  Threw it out.  We seem to have a hard time finding real peanut butter in the States.  There are peanut butter products on the shelves with the word ‘Natural’ on the labels but the peanut butter inside is about as natural as a vase of plastic flowers.  Don’t know how companies get away with that kind of blatant false advertising!! 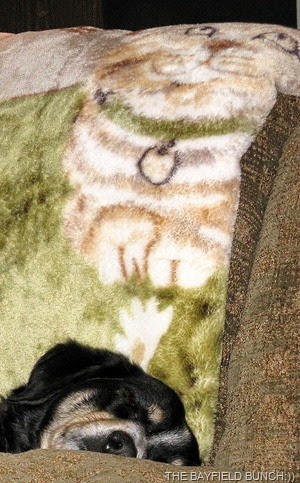 ASLEEP UNDER A WATCHFUL GAZE >>>

How nice to hear Spring Peeper frogs out around our little front yard pond again.  Can’t see em of course but we sure can hear em.  Soon will be the Crickets, then the Tree Frogs.  Song birds will begin arriving shortly as well & both Pheebs & I are itching to get ourselves out for our first country road coffee & muffin morning photo tour of the season.  Depending on the weather we could maybe slip out sometime later this week although after today’s cold temperatures & long range forecast I am not too optimistic about that.  After the harsh winter Spring is having a little difficulty getter herself ramped up this year.  I think we already had more flowers out last year at this time.  Squirrels have sure been active in our front yard though but they have not been able to figure out our new Squirrel proof bird feeder which was mysteriously sent to us in Congress by an anonymous Blog reader:))

Pat B in a comment wondered if we had a name for the new rig yet.  Nope, not yet & as I said to Kelly, I sure don’t like the name Commander.  And referring to as the Triple E doesn’t do it for me either.  I’m sure once we take delivery of it & get out for a few spins we’ll think of something.  Anyone have any ideas:))

I LOVE YOU TOO BIG RED

GROANER’S CORNER:((  A fifteen-year-old boy came bounding into the house and found his mom in bed. He asked if she were sick or something. He was truly concerned.
Mom replied that, as a matter of fact, she didn't feel too well.   The son replied, "Well, don't worry a bit about dinner. I'll be happy to carry you down to the stove."