SOME CLASS A MOTORHOME THOUGHTS TONIGHT

Our Monday evening sunshine & milder temps didn’t last & today we were plunged back into overcast windy skies & colder temperatures.  More as an excuse to get out of the house than really needing anything in Goderich little Bugsy Buns & I headed out in the Jeep. Zehr's Supermarket has the kind of Natural peanut butter I like so it was the supermarket we headed for. From there it was over to the Sub shop for a 6" Tuna Sub. Pheebs fav. Next was a run through McDonald's drive-thru for a coffee & carrot muffin followed by a gas stop across the road where the gas attendant always gives Pheebs a doggy treat. With coffee, muffin, & doggy treat in hand we headed for home. And that pretty much wrapped up another rather uneventful day. 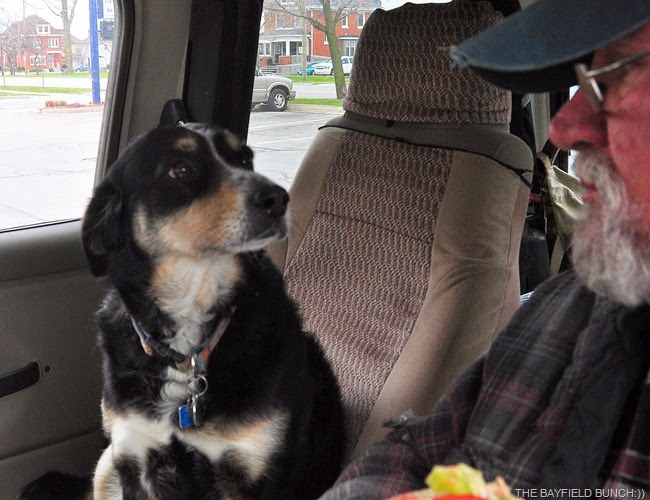 I’m sure there are folks out here who have wondered about the costs of traveling about in an RV. There are no doubt many variables & different scenarios but George & Suzie over at OUR AWESOME TRAVELS have kept records over the years & last winter’s expenses are on their latest blog post. They have saved themselves a hefty chunk of change since first starting out & I’m sure George would be happy to answer any questions people may have regarding their travels & membership parks, etc. 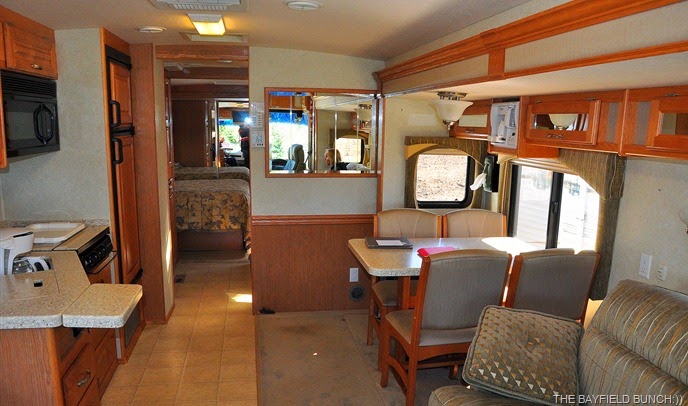 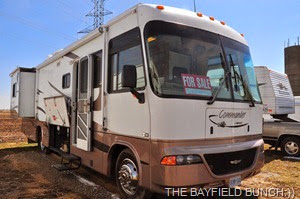 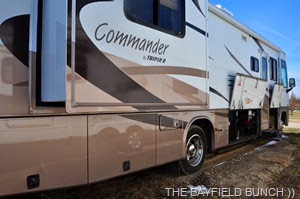 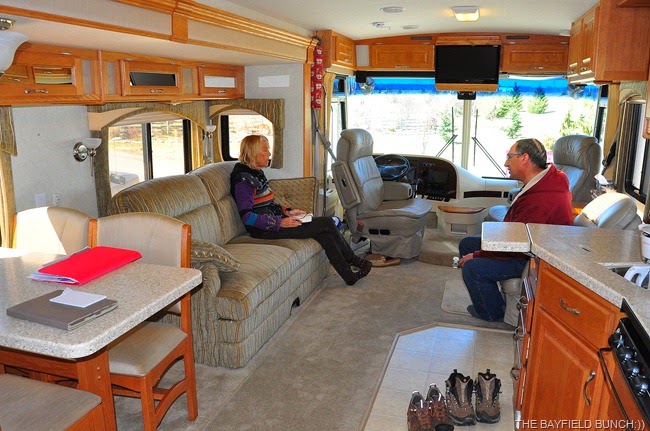 We plan on returning to Sedona Arizona this coming winter to continue our exploring around that whole area. So many hiking & Jeeping trails & the scenery is second to none. Gay & Joe from GOOD-TIMES-ROLLIN are there right now & have themselves some great photos showing them Jeeping along some of those unique organ altering boulder studded roads & trails that have a rather bizarre way of jarring & re-arranging one’s aging bones.  Of course we are looking forward to that road surgery & with a bigger rig & bigger holding tanks next winter we will be able to stay longer in what we feel will be a better state of comfort this time. Seems as we age ‘comfort’ has a tendency to take on an ever growing higher priority status. At least that’s the way I see & feel it…………………… 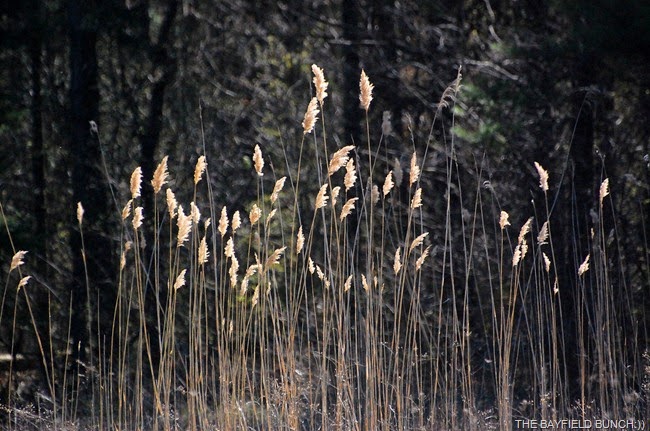 We heard from the Triple E Commander’s owner Don today. He is currently in Halifax on business but has the next two weeks off starting Monday. We are hopeful we can wrap this deal up & bring the big E home to Bayfield early next week. Been nearly 2 weeks since we first saw it & last night I had to go over the photos I took at that time to remind myself of what it was we we had actually bought. There is no big rush for us to have it but you know what it is like when you buy something like that. You want it home in your own driveway just as soon as possible if not before. 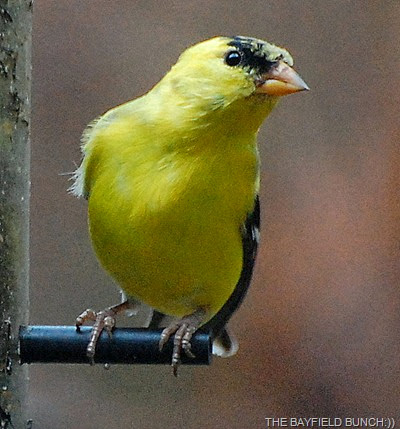 We owned our first Motorhome, a 33’ Damon Challenger for 6 years years & it took us back & forth to the American South-West as far as California 6 times.  Those years were spent living in our rig for 5 & 6 months of the year with 3 lovable dogs.  When we weren’t ranch sitting near McNeil Arizona we spent our time boondocking.  When we bought the house in Congress we reasoned we would be spending more time at the house & not as much time on the road traveling.  I must admit we were both becoming a little tired of traveling & spending all our time in the rig.  We were both needing some diversity, something new & different to do.  Change is always welcome.  The house thankfully gave us that.  We also reasoned we would not need a bigger RV anymore & downsizing to a smaller Class C was the way to go.  Well, not all decisions are right decisions & we did slip up on that one.  Not once, but twice.  After realizing our Sunseeker was tooooo small we figured a bigger Class C would solve that problem.  Nope, wrong again.  Ron from FOUR SEASONS PERFORMANCE had suggested well over a year ago the best way for us to go was to downsize to a smaller Class A instead of a Class C.  Reasons were obvious, more living space & more storage space etc.  We should have taken his advice but we were focused on Class C’s at the time.  Let me hasten to add, there is nothing at all wrong with Class C’s & they have many pluses.  All’s I’m saying is that just as a Travel Trailer & Fifth Wheel were not right for us, a Class C didn’t suit our needs in the end either.  After a few boondocking ventures this past winter the writing was on the wall.  If we hoped to continue our RVing boondocking ways & travel at a comfort level we have aged into we were going to have to go once again to an RV that best suited us.  And that was a Class A Motorhome again. 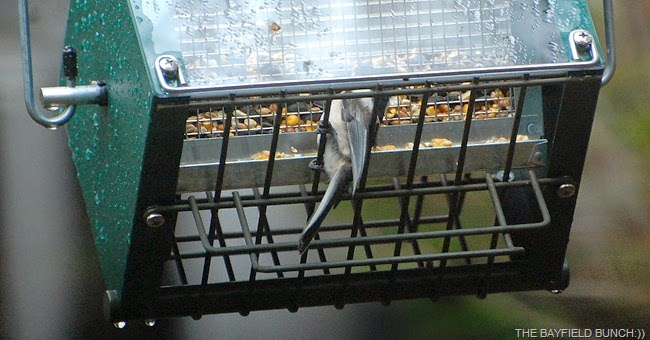 A year ago right about now we were in the process of taking possession of our 2011 Winnebago Class C & I’m sure I blogged about all the reasons we liked the Class C concept at that time.  And they were all good reasons but that was a year ago & priorities, whims, fantasies, & good old fashioned hard based logic have a habit of changing sometimes.  Who knows maybe a year from now I will be sitting here typing away all the reasons we decided to trade our (yet to arrive) Triple E Motorhome in on a sailboat or something.  Or maybe we will be selling everything we own to board a tramp steamer & sail off to Australia with the idea of hitchhiking across the outback.  Um, I don’t think that last one is going to happen but priorities is priorities & we are all prone to bouts of fantasy based realities from time to time. 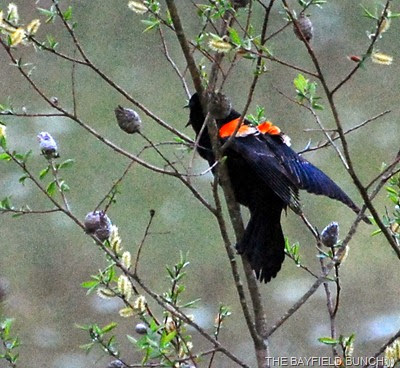 Here’s what we missed about our first Class A Motorhome & here’s what we are looking forward to by returning to a Class A once again.  Definitely like the driver’s seat visibility advantage of sitting higher than surrounding traffic.  Driver’s height is a big plus when traffic thickens up around big cities.  And breathtaking scenic views coming through that big front windshield are like no other vehicle.  I feel much safer riding on larger 22.5 inch tires as well.  Class A’s are intimidating in size but they are not hard to drive, they only look like they are.  Don’t let the size scare you.  Like anything, with practice it doesn’t take most anyone long to feel comfortable driving it.  And Class A Motorhomes with all their bigger windows & windshield are much brighter inside.  You can get more of nature inside the coach by simply having bigger & brighter windows to look out of & let that nature flow in.  We hadn’t realized that until we had our 2 Class C’s.  We felt enclosed in them because they were darker & smaller.  Although both our C’s had adequate storage with very large rear bins we really missed the full basement a Class A has to offer.  One does not have to fill all those bins just because they have them & that was something that took us about 3 years to realize.  Even if one travels with bins half empty it’s nice knowing you have the space just in case something has to be loaded up.  A full basement also means the coaches main floor is much higher off the ground giving folks inside a better insulation factor from the cold ground below.  Or any Critters below too.  Of course the spacious corner shower & the fact I will not need to climb a ladder into bed were also both contributing factors in our decision as well.  And then there are the larger tanks.  A bigger fresh water tank will enable us to stay out boondocking longer. A big plus. Both gray & black tanks are larger also contributing to longer stays in the desert. And a bigger hot water tank means no startling cold water shower surprises. Not as many gas stops with a 75 gallon gas tank either.  Bonus because I absolutely hate gas pumps!!  I have heard it said Class C’s & Class A gas Motorhomes whether Chevy or Ford engines get about the same gas mileage.  Kind of hard to figure but that is what we have been told my knowledgeable people. 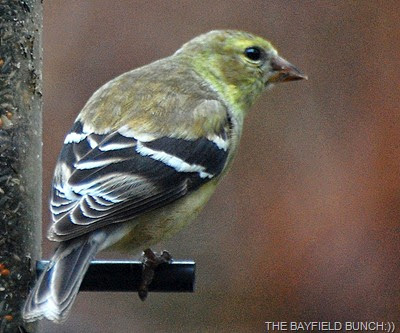 One thing Class B’s, C’s & A’s have in common is something both Kelly & I really love.  No matter how cold or hot the temperature is outside when we stop for the night or mid day traveling breaks the temperature inside the rig is always perfectly where we want it.  Without ever going outside in the rain, wind, or snow we can simply climb out of our seats & go back to sit in a favorite recliner, couch, or at the dining room table.  Use the washroom, fix a snack, watch some TV, do some internet surfing, whatever.  No need to to go outside & be assaulted by the harsh elements.  Motor Coaches also provide the easy convenience of a washroom just a few steps away at all times and we aging Seniors know how important that can be.  Remember me mentioning priorities:))  Anyway those are just a few of the reasons we decided to go back to a Class A Motorhome.  Yes, there are cons as well & in a future post I will list some of them because it is only fair to have a look at both sides of any coin.  There is no such thing as a perfect RV.   When choosing a rig it’s a matter of tipping the scales to the pros side & that all depends on the individual needs & wants of the buyer.  If we all thought alike the whole darn bunch of us Planet humanoids would still be huddled around smouldering fires in dark, damp, mouldy caves somewhere wearing little more than the furry hides of about 6 dozen skinny Kangaroo Rats………………………………….. 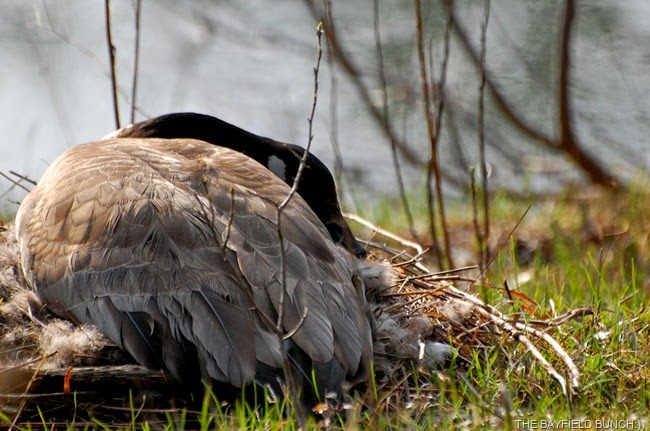 MAMA GOOSE IS SITTING ON 4 EGGS

GROANER’S CORNER:((  Two young boys were spending the night at their grandparents. At bedtime, the two boys knelt beside their beds to say their prayers when the youngest one began praying at the top of his lungs.

His older brother leaned over and nudged the younger brother and said, "Why are you shouting your prayers? God isn't deaf." To which the little brother replied, "No, but Gramma is!"