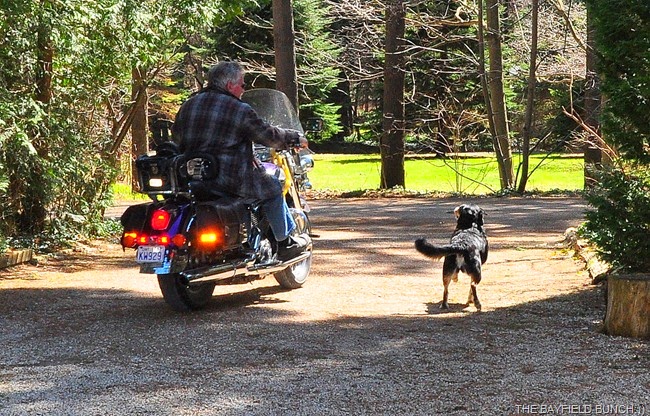 With temperatures hovering around the freezing mark this morning there was no big hurry to get outside.  Made it around the trail fine but headed back inside the house soon as we returned.  Brrrrrrrrrrr!! 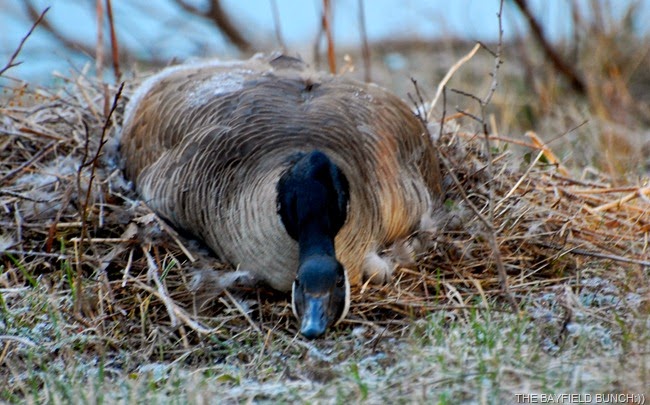 MAMA GOOSE, NOW ON HER NEST KEEPS A CLOSE EYE ON US AS WE PASSED BY THIS MORNING

It was well after 9 before it was time to take Winnie for her last drive as part of the Bayfield Bunch.  Rain due in Friday & I didn’t want to have to clean off all the pine needles again so today was the day for Winnie to go.  Ron from FOUR SEASONS PERFORMANCE had said to bring her down anytime so Winnie & I were soon southbound for Grand Bend with Kelly following in the Jeep. 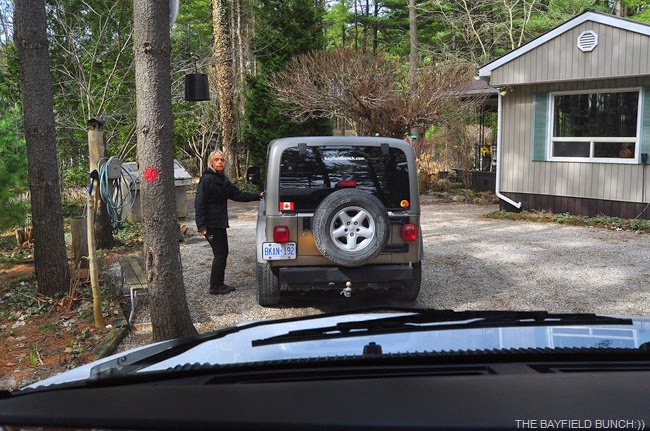 BACKING WINNIE OUT OF HER SPOT FOR THE LAST TIME

Ron wasn’t long coming out the door with a red 2011 plate to replace our front license plate.  Went over a few things & he said he had some folks coming Saturday to have a look at it already.  We decided on an asking price of $64,900.  A good deal for someone considering it’s the top of the Class C line for Winnebago.  It is the Access Premier model.  New solar system installed last November plus it has a domed satellite tracking system on the roof.  Only about 18,000 miles on it too.  Excellent shape, lots of storage space, everything works, spare tire has never been on the road, etc. etc. 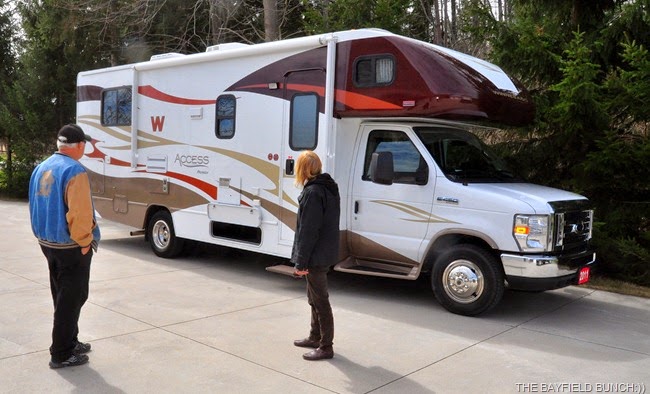 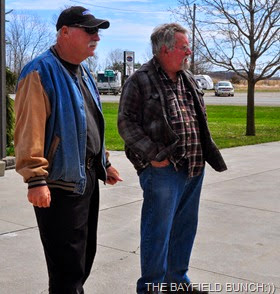 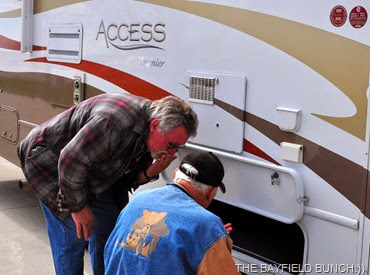 GOING OVER A FEW THINGS ON THE COACH (NOTE TO AUNT JEAN, NOTICE MY ‘SCHAEFER SLOUCH’) 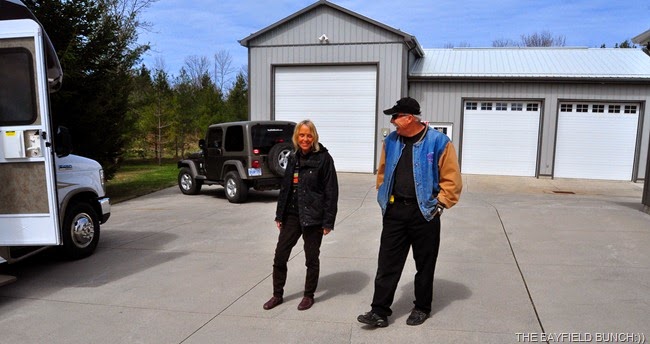 HAD US A BIT OF KIBBITZING GOING ON THIS MORNING TOO:))

After sitting here reading over my own post’s title tonight I felt a little sad.  It’s hard for me to say good-bye to anything.  Always seems to be so final & I guess that is because it is.  Winnie gave us some great memories this past year transporting us safely from place to place.  She was a good looking well running rig & I will miss her just as I have missed all the other vehicles I have owned over the years.  (47 & counting)  I wrote a post about those vehicles back in September of 07 entitled, A LIFETIME OF OLD CLUNKERS.

A partial afternoon sun brought the temps up a bit so figured I would hook up my motorcycle battery & see if the bike would start.  Good thing I bought a new battery last year because it took 5 good cranks before the engine came to life.  Always a sweet sound to hear an engine fire up after sitting for over 6 months & especially this year after the long brutal winter’s cold.  Took a spin around the Park a couple times before parking it in the sun & getting myself busy cleaning it all up for another season.  Soon as it gets warmer I’ll have it out for it’s customary ‘feeling good’ Spring run:)) 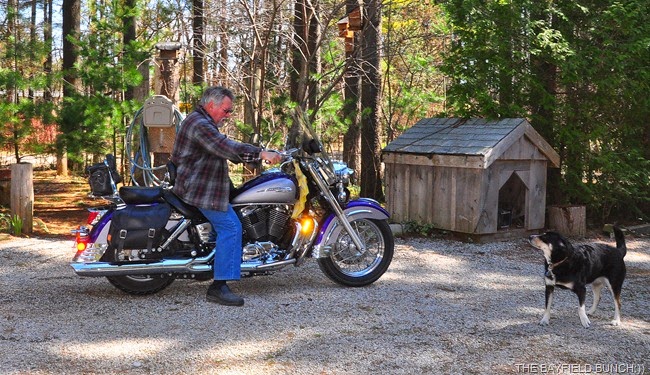 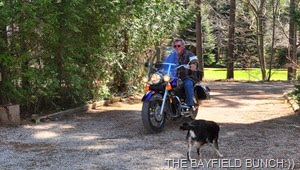 Noticed a stray dog in our yard late this afternoon & he appeared to be lost.  He was a little timid at first but Pheebs quickly won him over & they were both soon running around like a couple Crazy-O's.  Looked hungry so we fed him.  Spotted a phone number on his tag & Kelly called the number.  Seems he had wandered away from a neighbouring farm about half a mile down the road.   Name tag said his name was Maverick so we loaded him in the Jeep & drove him home.  The folks were glad to get him back.  Got talking to one of the fellas there & it turns out this 200 acre piece of property with a large Dutch Windmill on it is currently under development & is going to be known as the WINDMILL LAKE WAKE & ECO PARK.  We were sooooo surprised by this because we live just up the road & had no idea this was all going on.  If you open the linked website above you will see an aerial photograph of the lake & property.  The Dutch Windmill can be seen right of center in the bottom third.  You can also see where we live except you can’t see us.  Notice the farm (long chicken barns) at the upper right.  Just above that is a large Pine forest & if those Pine trees were not there you could see our house.  One small red roof is visible in the Pines & our place is located about half way between that red roof & the Chicken Farm.  You can also see Lake Huron at the top of the photo & that shows how close we live to the third largest fresh water lake in the world. 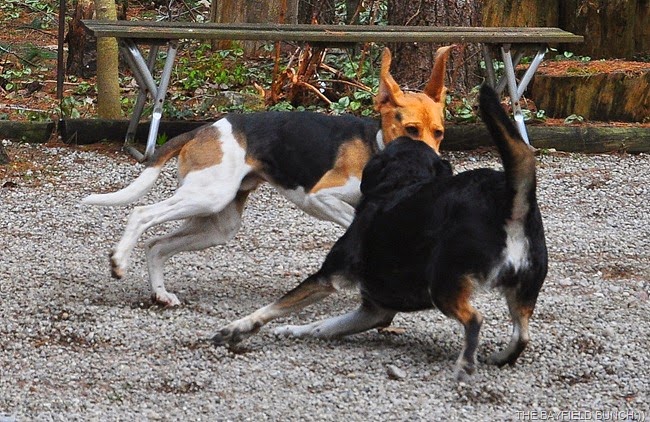 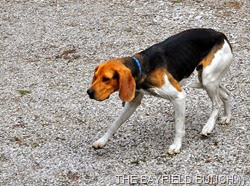 With Winnie gone now & another week before our Triple E arrives there seems to be a big hole in the trees alongside our driveway & carport.  We are anxious to get the big E home & into it’s spot.  In the meantime little Jeepers will have to pick up the slack & fill in the vacant space best he can………………………. 10-4:)) 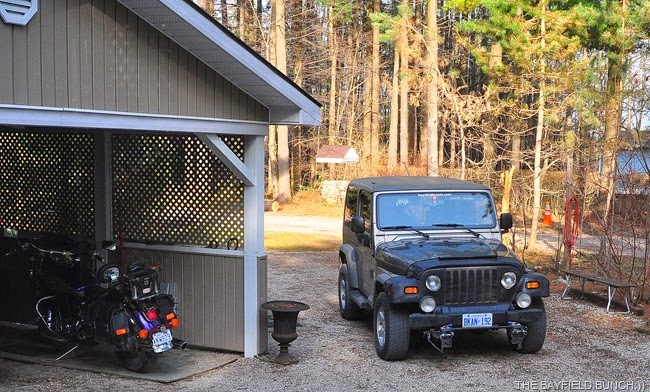 GROANER’S CORNER:(( There was a guy telling his friend that he and his wife had a serious argument the night before. "But it ended," he said, "when she came crawling to me on her hands and knees." "What did she say?" asked the friend. The husband replied, "She said, 'Come out from under that bed, you coward!'"